History and highlights of Guimarães

The city of Guimarães in Northern Portugal was the country’s first capital and the birthplace of Portuguese national identity. The city center of Guimarães was designated a UNESCO World Heritage Site in 2001 and there are many monuments and museums attesting to this history. But Guimarães also has a contemporary side with a thriving modern culture and economy. The city has a large youthful population as it is home to Minho University and about half of its over 52,000 residents are under 30. Designation as a 2012 European Capital of Culture also provided recognition for the city’s rich culture, brought economic bonuses, and gained worldwide attention. 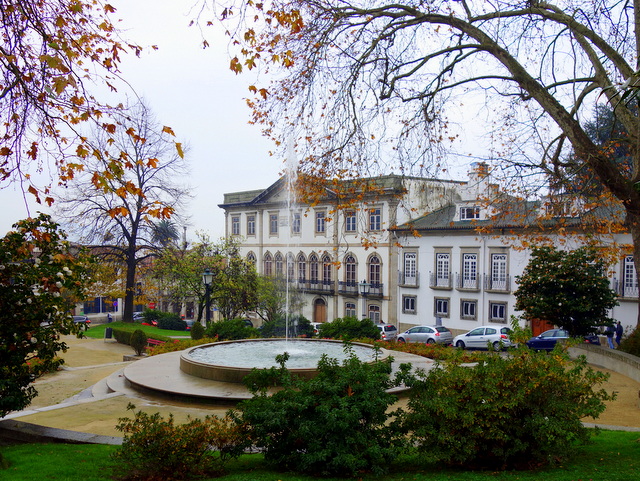 Fountains and gardens in a lovely square in Guimaraes

King Afonso Henriques and his castle

Towering over the city center, the 10th-century Castelo de Guimarães. was in excellent position to protect the area from the attacks of the Moors, Normans, and Vikings. It’s said that the first king of Portugal, Afonso Henriques, was born in the castle in the early 11th century. 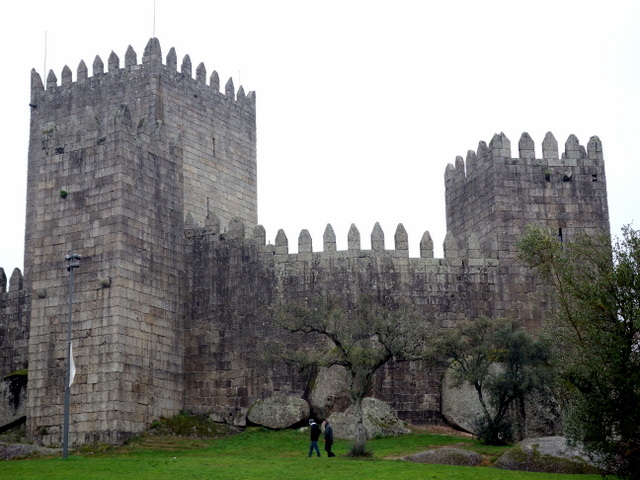 Declaring himself a knight in 1122 and raising an army at the age of 14 (age of consent at the time), Afonso fought many battles and defeated his own mother’s forces in 1128. After more years of warfare, he conquered the ruling Moors in 1139 effectively gaining independence for the region and leading to the creation of a Portuguese national identity. Following the momentous victory, Afonso was declared king by his troops. 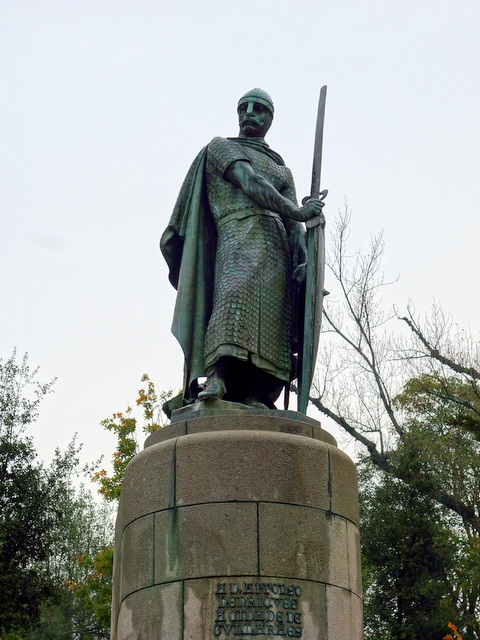 In the photo above of the statue (shown above) honoring King Afonso Henriques, you might notice that the top of the sword is missing. The story is that a drunken student broke off a piece of the sword one night and brandishing it overhead ran naked through Guimarães proclaiming, “I am the King!” 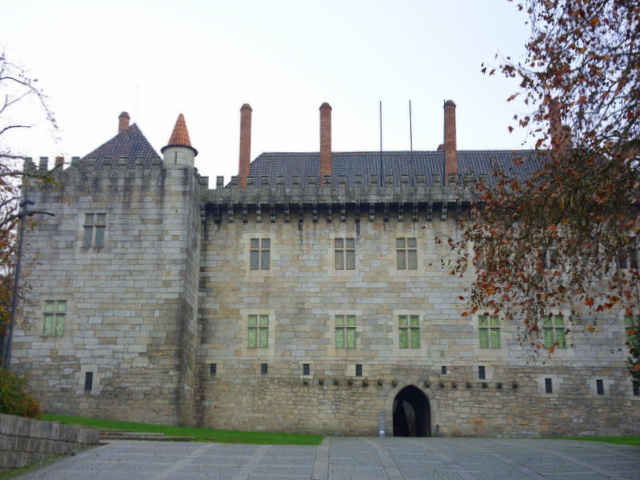 Near the castle is Paco dos Duques (Ducal Palace) with its distinctive chimneys (shown above). The 15th-century building now houses collections of art, tapestries, weapons, and other period treasures. The top floor is maintained as a residence for the president of Portugal whenever he comes to visit Guimarães.

A walk through the city center 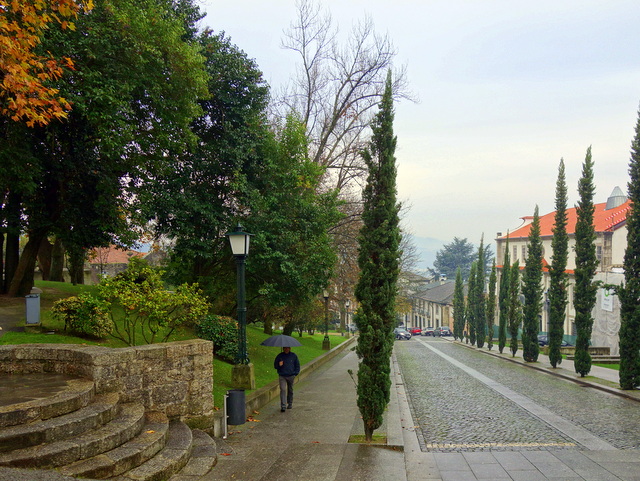 For me, the most intriguing part of Guimarães is the historic center with its medieval squares like Praça de S. Tiago (St. James Square) pictured below, surrounded by homes adorned with flower boxes and hanging laundry on their balconies. 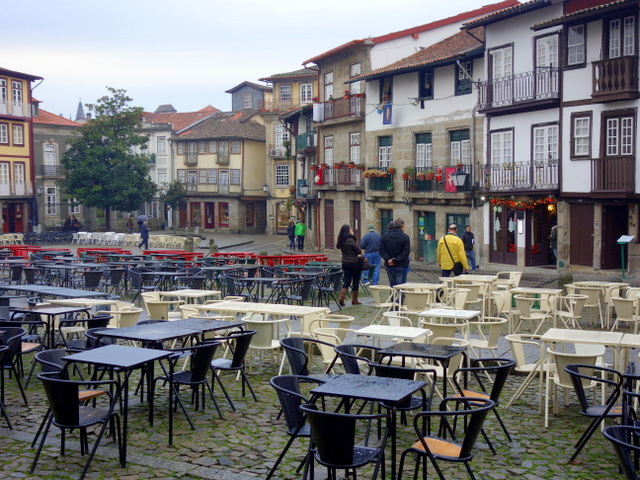 All is quiet on this rainy afternoon at Paco de S. Tiago

Largo da Oliveira (Oliveira Square) has many shops and cafes where the Salado Monument (partially seen on the far right in the picture below) commemorates Portugal’s victory in the Salado River battle over the Moors who were attempting for the final time to regain control of Portugal. 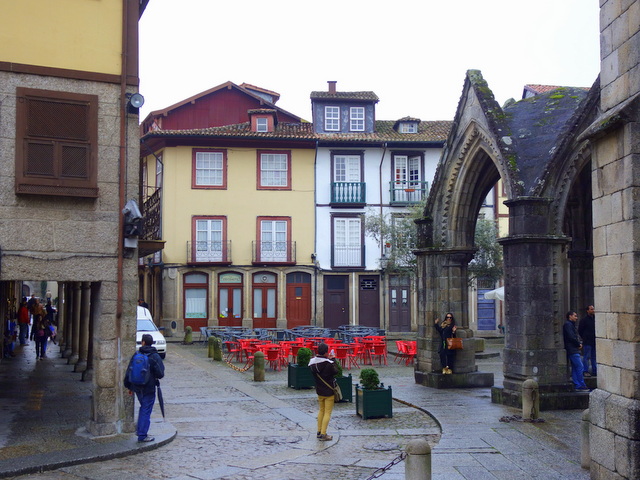 It’s always fun to be surprised by a bridal photo opportunity. While we were walking up to the Igreja da Oliveira (Oliveira Church), a bride was being photographed in various spots on the square. She was young and beautiful and made think of the blend of medieval and modern Guimarães. 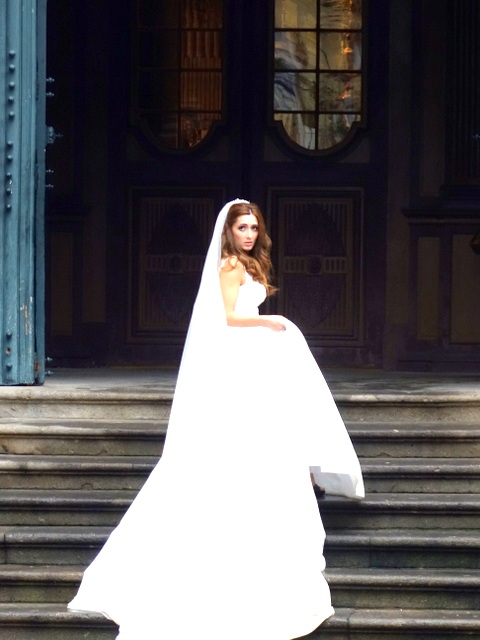 A beautiful bride on the church steps

A tribute to Guimarães’ medieval history, but with an avant-garde twist, is the sculpture of King Afonso Henriques (shown below) in Largo da Misericordia.  It was created by artist João Cutileiro in 2001. We were told that it was quite controversial. 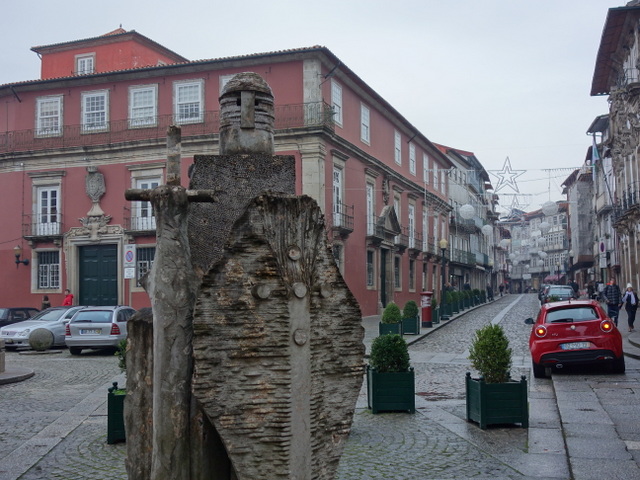 And yet another “king”

King Afonso Henriques (and the faux king mentioned earlier) aren’t the only notable kings celebrated in Guimarães. The Elvis Bar in the historic city center (pictured below) is a popular night spot with lots of Elvis memorabilia including photos, music, and art. 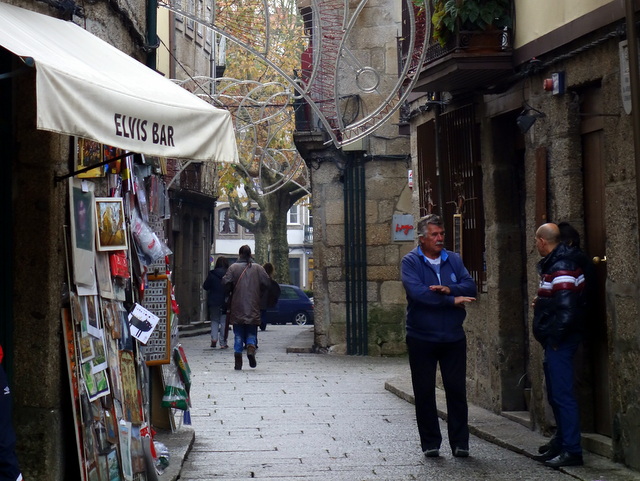 Through the centuries and still today, wood, leather, silver, and textile crafts have been part of the industry of the city, and there are many shops selling local products. 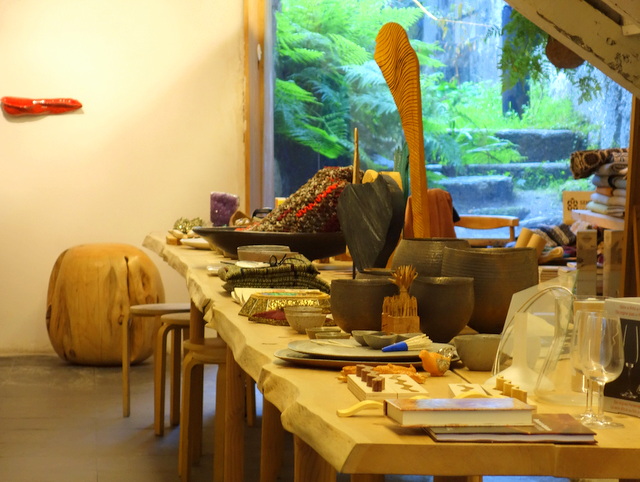 Woodcraft products in a Guimaraes shop

Leaving the medieval quarter, we were back on a busy modern boulevard at Largo Republica do Brasil heading out of the city, reflecting upon the centuries of history, contemporary character, and significance of Guimarães to the Portuguese people. 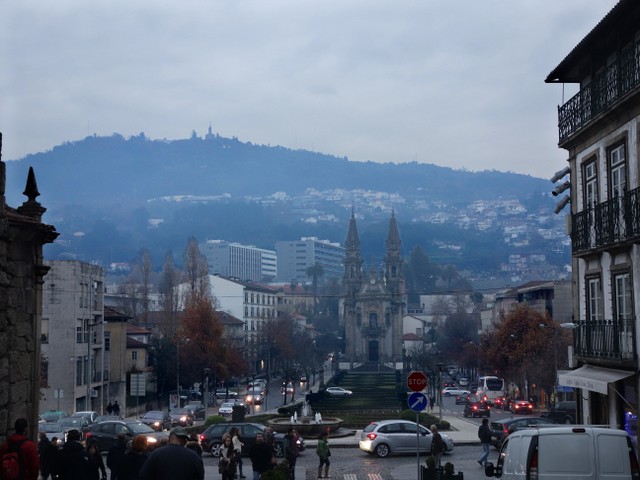 Our tour of Guimarães was one of the optional land excursions we enjoyed as part of our Viking “Portugal’s River of Gold” cruise — a wonderful way to explore the Douro region! We traveled by coach from our docking point in Porto, 55km to the southwest.  Guimarães can also be reached by car, train or bus. 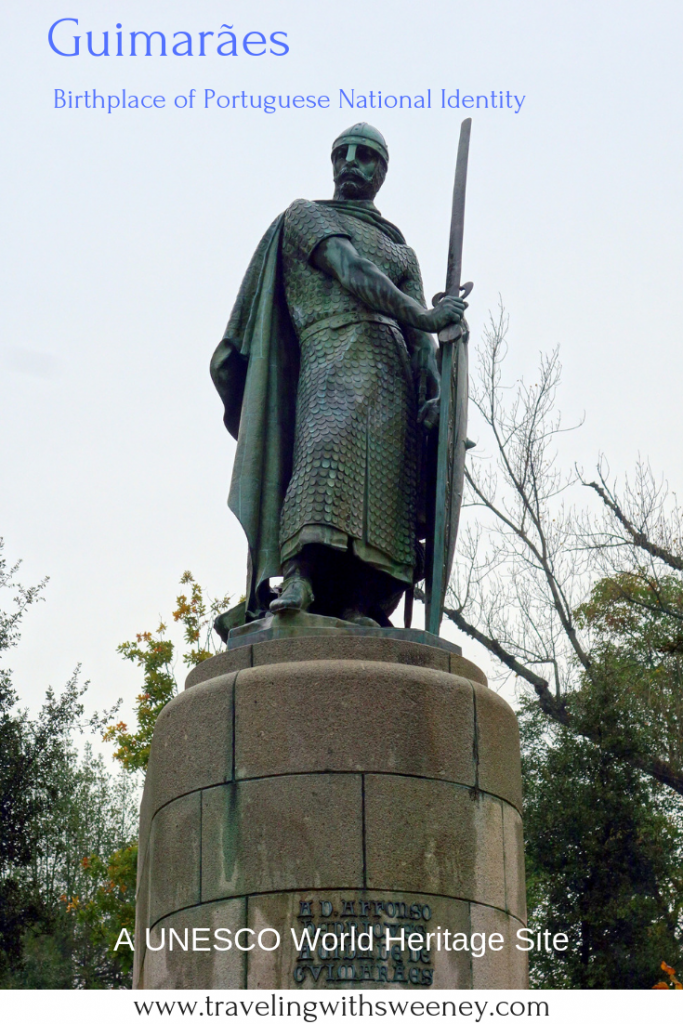