Sweeney loves to ski… and I do, too. So we decided that a North Lake Tahoe ski trip was overdue. 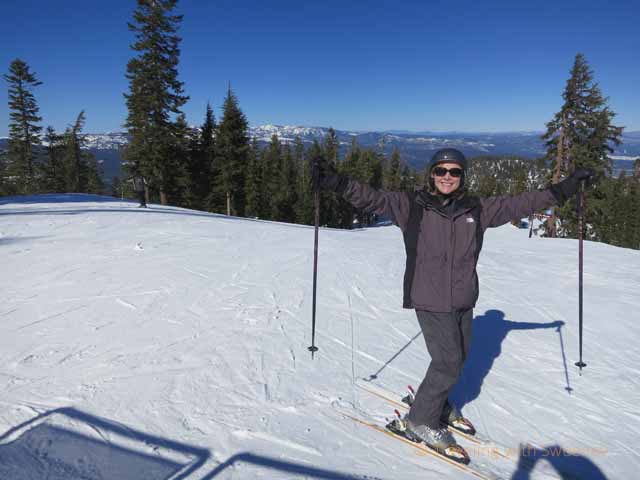 I’m writing this post after our 2nd day of the trip, the first time ever we’ve been able to ski here mid-week. Usually, it’s Saturday, Sunday and Monday and much busier.

I had a really tough work schedule during key ski months the last 2 years and I’m ashamed to admit we didn’t get in any downhill skiing. So Sweeney was jumping for joy to be in North Lake Tahoe on a beautiful day.

In our best years of skiing we would take three 3-day weekends, but it’s been about 5 years since one of those. I was a little apprehensive because the busy schedule has also caused me to slip on my fitness regimen. Sweeney was also a bit anxious because it had been 3 years since we’d been on the slopes. The perfect day (clear blue sky, bright sun, 40°F, but with good snow because of the cold nights) let us quickly put any ambivalence aside. 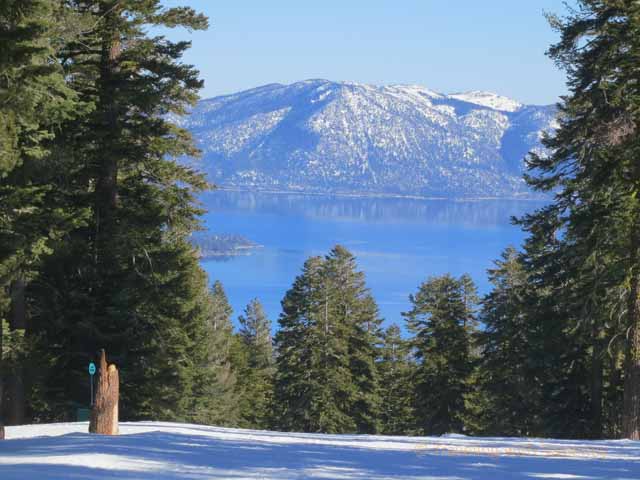 Any concerns both of us had were also removed during the first run. “It is just like riding a bicycle,” I thought. Of course, this sentiment was dramatically aided by the fact that we’d both gotten new skis during the 2 years before our hiatus from skiing and the significant change in technology had prompted me to say then, after my first run on my new skis: “I feel like I’m cheating.” My previous pair was over 15 years old and my new skis do a lot of the work: they’re considerably shorter, wider, and most importantly, they are parabolic.

Most of our skiing has been in Tahoe. It’s a 3.5 hour drive door-to-door each way. And it is beautiful, as are many ski areas, but the big lake really adds to the beauty.

I often kid Sweeney that although she enjoys skiing, she enjoys the lunches more. We have been fortunate to catch many days like this, and lunch outdoors at 40°F degrees may seem silly but with the sun at that elevation and the ski clothing of today, it’s just right. After all that fresh air and exercise, the food is awesome (the wine too). 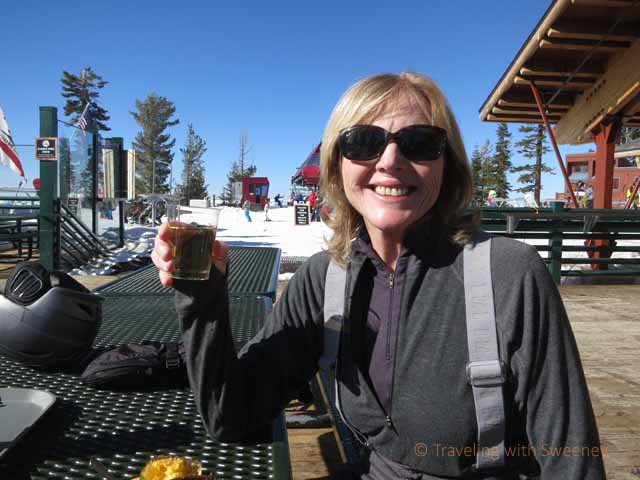 Two years away had changed this ski resort and our favorite lunch dishes at this top-of-the-mountain restaurant (for Sweeney, chicken quesadilla — for me, fish tacos) were no longer part of a significantly changed menu. So instead, we had homemade chili and it really hit the spot, so much so that the better photo of Sweeney wasn’t used here because she had a big spot of chili on her chin. That aside, the Chardonnay was still her favorite part of the meal.

Although even a short lunch can make it seem harder to get started skiing, Sweeney was just as excited to jump back on the slopes. 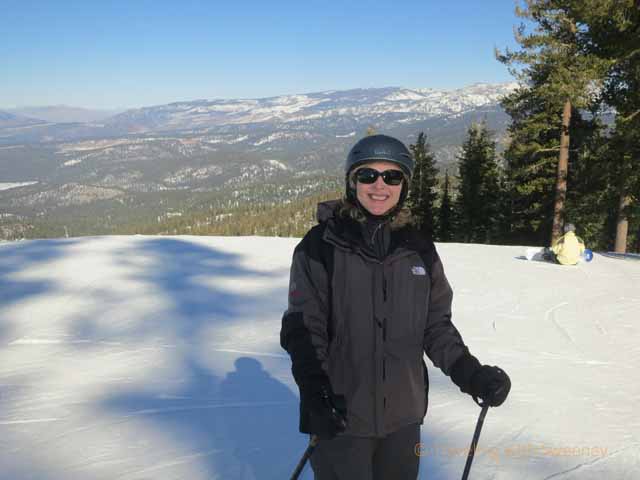 We enjoyed the rest of a beautiful day of skiing and were quite pleased at how we’d done and held up.

But oh what a difference a day makes, especially in the mountains. On our second day, the weather changed to snow showers and about 12°F colder. On top of that, though we did significant stretching, we were sore and our muscles were tired. That second day is always the hardest for any exercise. The picture below was taken lower down the mountain and doesn’t show the severity of the weather at the top. 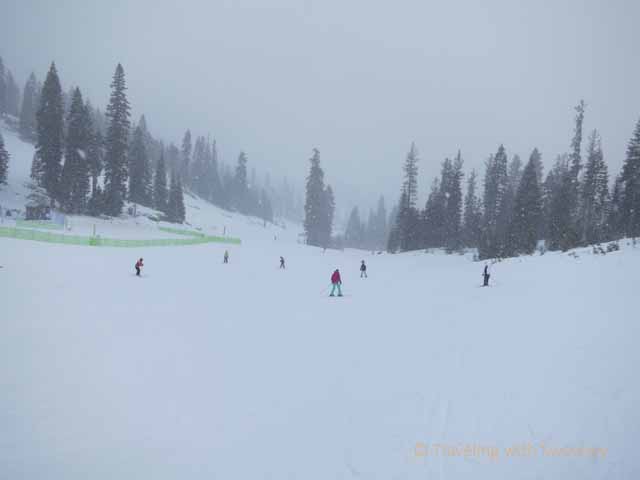 Nonetheless, we braved the more challenging weather, driving winds (gusts 30 mph), horizontal snow, poorer visibility and reveled in the day. It was fun to see and experience … and we felt proud to have persevered, skiing the full day as we had the previous day which had ideal weather.

With Mardi Gras next week we found this tree below festooned with beads (and a few other items) to be timely. This resort has a Mardi Gras event so I believe these remained from previous years. Beads decorating trees is not uncommon in New Orleans (though they’re much more common there for another reason) and I assume this tree received the attention because it was the closest tree to any lift. 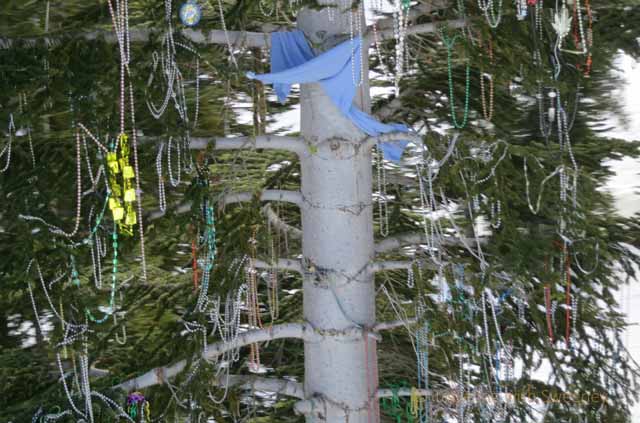 Festive Beads Adorn the Trees Next to Ski Lift