Highlights of Palazzo Te in Mantua

A palace built for love

In a city full of prestigious art and architecture, deep culture, and Renaissance majesty, Palazzo Te embodies all of that plus surprising elements of daring sensuality and secret love that spark the imagination. 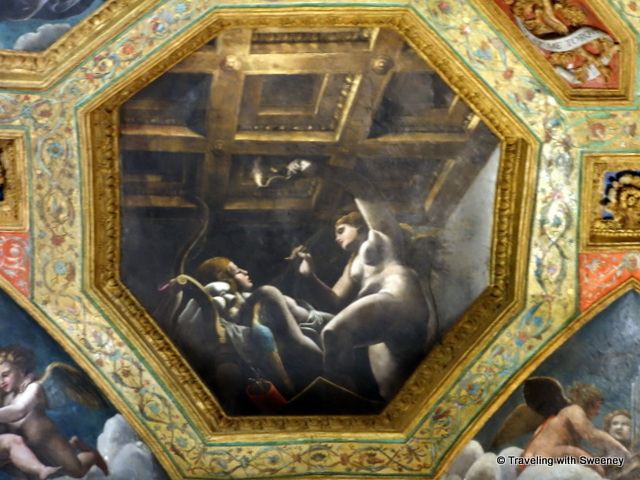 Chamber of Cupid and Psyche

At Palazzo Te Federico entertained his lover Isabella Boschetti and entertained noble visitors such as Charles I. Many paintings of Romano and his apprentices throughout the palace reflect the duke’s burning love for his mistress.

With the wide range of subjects and given the mischievous imaginations of Federico and Giulio Romano, the best way to appreciate the beauty and significance of Palazzo Te is on a guided tour. Mr. TWS and I were fortunate to have a private tour of the nearly 20 major rooms and spaces of Palazzo Te with Mantua guide Giuliana Varini. Giuliana’s rich detail of the rule of the Gonzaga family and many stories behind the amazing frescoes, architecture, and designs added a deep dimension to the experience and our enjoyment of this must-do activity.

We’ll give you just a sample of what’s inside Palazzo Te and highly recommend that you put a visit to the palace on your itinerary when visiting Mantua.

Chamber of the Giants

It’s not all about love and romance at Palazzo Te.

Though we visited this room last, I start with it because it was one of my favorite of Romano’s masterpieces and one for which the palace is best known. As we entered the empty Chamber of the Giants I had an immediate emotional reaction. With a domed ceiling and rounded corners and with some of the large grotesque figures and scenes of destruction, I felt engulfed in the dramatic story painted above and around me. Adding to the intense effect, the shape of the room echoes every sound we made no matter where we stood. 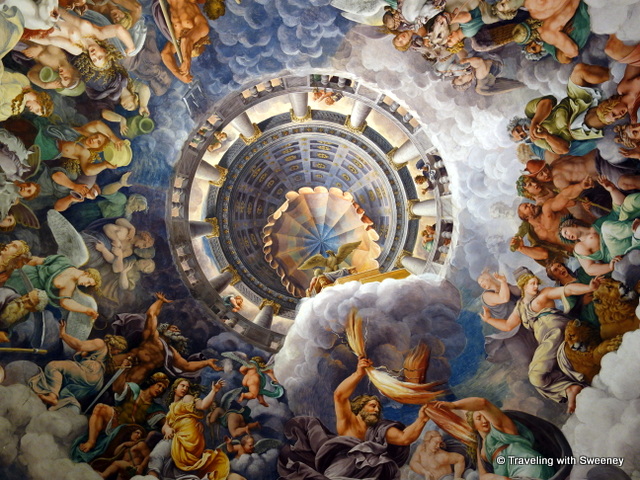 Chamber of the Giants

The somewhat disturbing paintings encompassing the ceiling and walls of the chamber portray the Fall of the Giants from Ovid’s Metamorphoses. Charles Dickens, who traveled extensively in Italy, in his Pictures from Italy described “the unaccountable nightmares with which its interior has been decorated” and the giants “so inconceivably ugly and grotesque that it is marvelous how any man can have imagined such creatures.” The scene in the center of the room’s domed ceiling (pictured above) features Jupiter as he punishes the giants who planned to overthrow the gods. The size of the giants, the reality of the depiction, and the unique aspects of the room and art punctuated an already fascinating tour.

Chamber of Cupid and Psyche 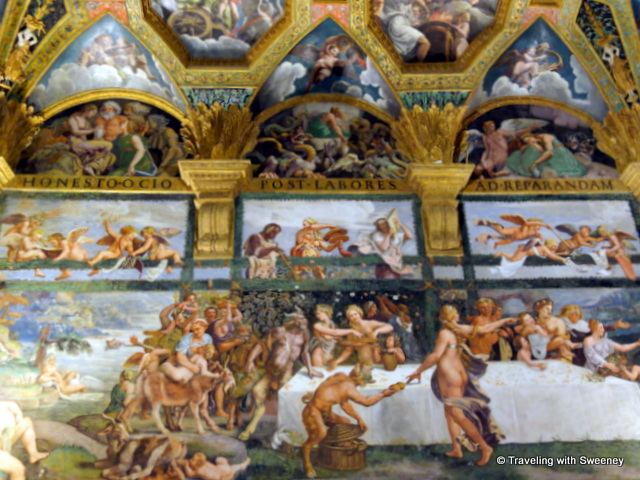 The wedding feast portrayed in the Chamber of Cupid and Psyche

Chamber of the Devices

Devices is an interesting term that makes one expect a display of mechanical gadgets but “devices” here refers to the heraldic emblems of the Gonzaga family presented in the chamber. Each is a symbolic emblem consisting of an image and a motto that together reflect key traits such as virtues, moral principles, and important personal events in figurative and idealistic ways. 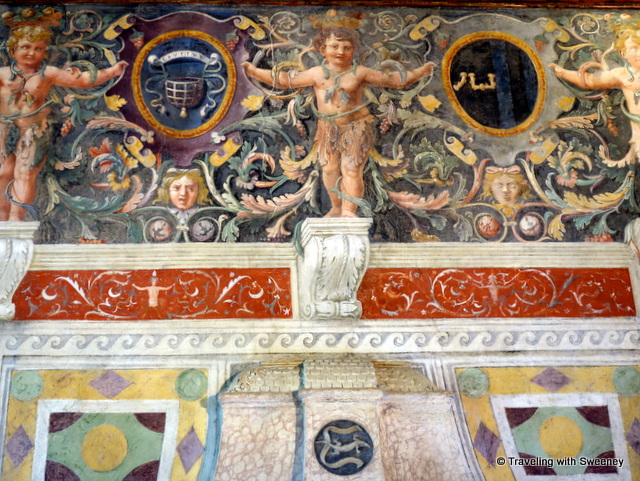 Chamber of the Devices

Chamber of the Winds

At the heart of the Chamber of the Winds is astrology and the influence of the stars on destiny. The name comes from the masks on the wall representing the faces of the winds but mainly the room has an astrology theme particularly with the signs of the zodiac represented on the walls. 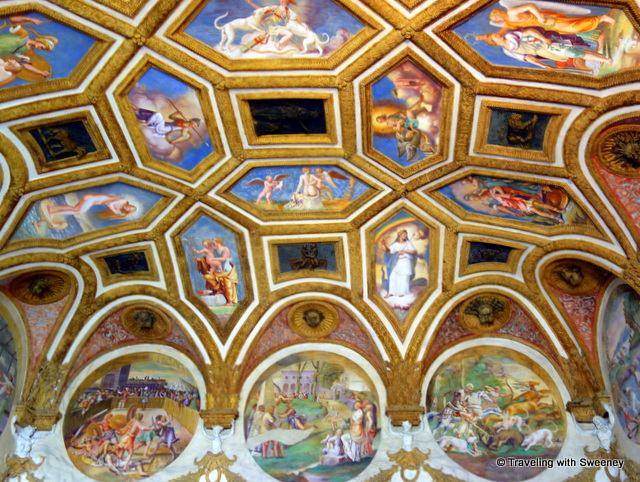 Chamber of the Winds

Chamber of the Stuccoes

In this chamber, the walls and ceiling are decorated with ornate stucco reliefs. The scenes at the top of the walls depict a procession of about five hundred Roman soldiers emerging through an arch and marching. The detail of soldiers, women, children, horses, supply wagons, musicians and the emperor is amazing. 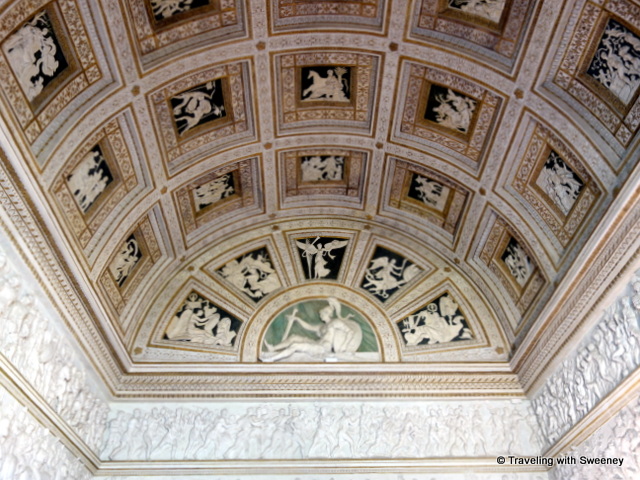 Chamber of the Stuccoes

Chamber of the Sun and the Moon

This room is named for the fresco (pictured below) in the center of the chamber’s vaulted ceiling. The fresco depicts the chariot of the sun at sunset and the chariot of the moon as the moon rises, a scene representing the passing of time. With the rather graphic depiction of the charioteer for the sun, Mr. TWS said he wasn’t sure if that wasn’t part of the source of the room’s name. 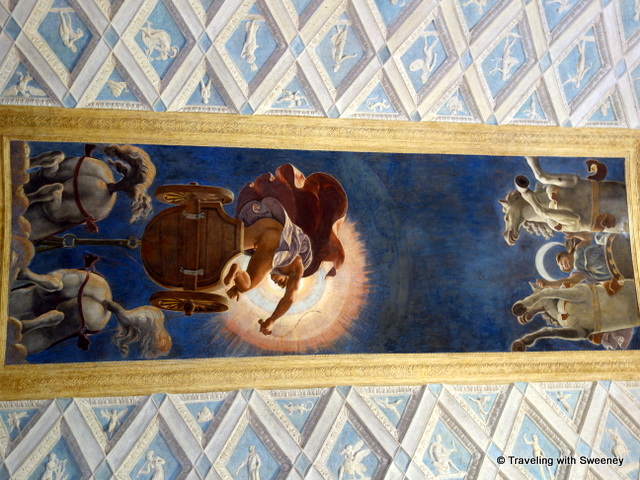 Looking up in the Chamber of the Sun and the Moon

Loggia of the Muses

The Loggia of the Muses, a hallway dedicated to the goddesses of art and science, was the entrance for the duke’s guests coming into the state rooms. 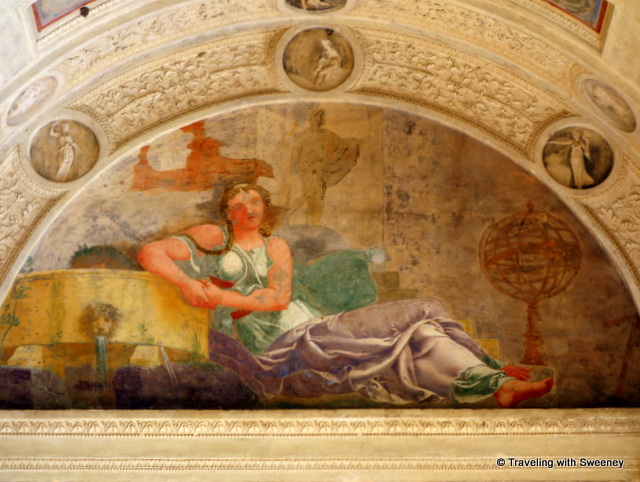 Loggia of the Muses

Hall of the Horses

One of the first rooms we visited, the Hall of Horses, introduced us to the many tricks on the eye prevalent throughout the Palazzo, such as the 3D effect that made the actual-size horses look almost real. The room’s main function was to receive guests and host special ceremonies. The Gonzaga family bred horses and considered them the finest gift that could be given to a friend or guest. 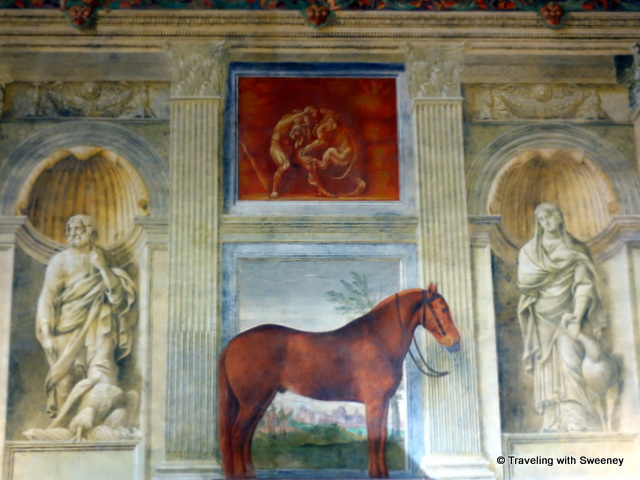 Hall of the Horses

The Apartment of the Secret Garden

Our tour ended outside the main palace at the adjacent Apartment of the Secret Garden. 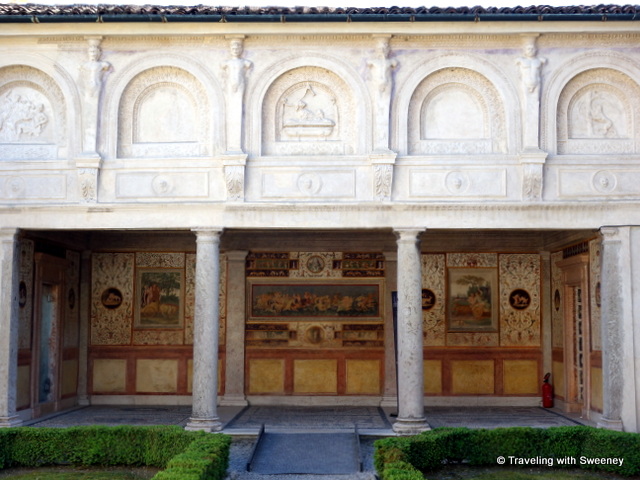 The loggia of the Apartment of the Secret Garden

The apartment, overlooking a secret garden from which it takes its name, was created by Federico as an intimate and secluded place. It is said that he used the room for solitude and even sometimes to escape his lover. 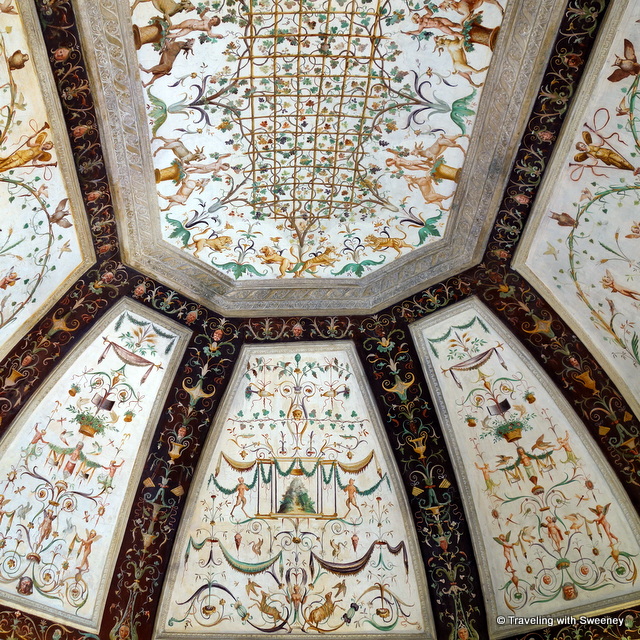 Stunning ceiling of the Apartment of the Secret Garden

I hope this has given you a good introduction to Palazzo Te, but there’s much more to see and experience at the palace and in the city of Mantua when you visit. 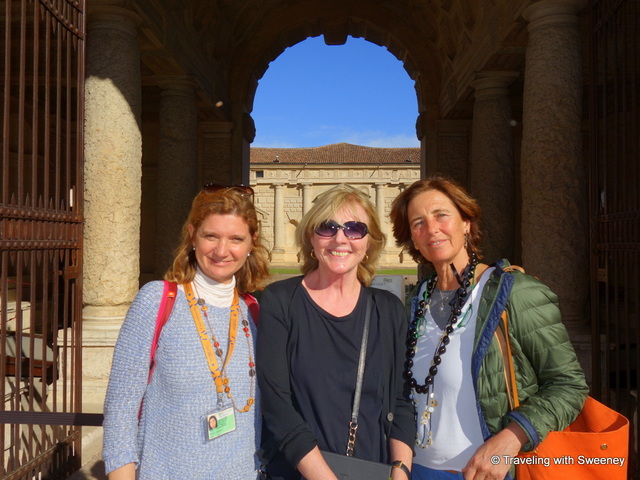 With Giuliana Varini and Luisa Castiglioni at Palazzo Te in Mantua

Thanks to our guide Giuliana Varini (left) and our Mantua host Luisa Castiglioni (right) for our tour of Palazzo Te.

8 thoughts on “Palazzo Te: Inside the Pleasure Palace of Mantua”