Mr. TWS and I have loved our Viking River Cruises for many reasons. One of those reasons is that on each of our cruises. we met some really nice people. On river cruises, it’s entirely up to you how much or how little you want to mingle with fellow passengers. You don’t have to be a social butterfly to enjoy your time on board. You can keep to yourself, be the life of the party, or choose your own level of sociability somewhere in between. Mr. TWS and I like to mix it up — hanging out with like-minded, fun-loving passengers and spending time on our own as well.

With three Viking river cruises now under our belts, we’ve been reflecting on the aspects we’ve enjoyed most which includes fellow passengers we’ve met. I thought you might like to meet a few of the people who really added to the enjoyment of our journeys on the Douro, Danube, and Rhine Rivers in Europe.

Suzi, executive director of a non-profit agency in West Virginia, and her husband Mark were high school sweethearts whose romance and marriage has stood the test of time. They both love to travel especially visiting beaches and big cities, and taking road trips to visit their two married children and three grandchildren. 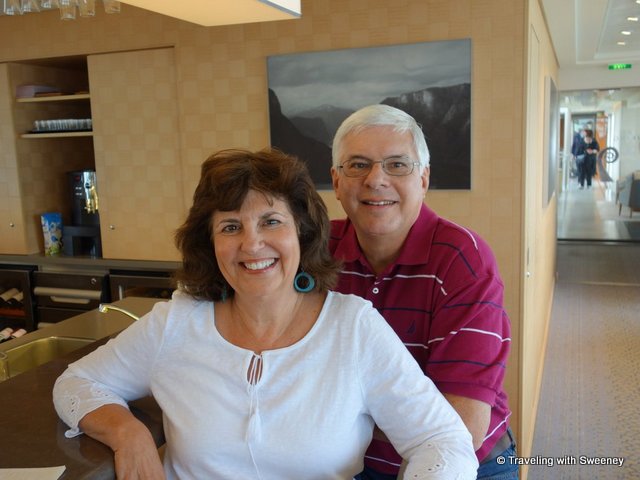 Suzi and Mark relaxing in the Viking Tialfi lounge

We had a lot of fun with Suzi and Mark during several activities on our Rhine Getaway cruise.

“I loved walking through Strasbourg, going inside the windmill in Kinderdijk, going inside castles and meeting so many nice, friendly, interesting people.” — Suzi

One of our favorite times with this nice couple was on an optional excursion at a restaurant in the charming town of Rüdesheim, Germany. Along with a small group of other Viking Tialfi passengers, we sampled traditional German food and joined in the fun and oompah musical entertainment.

“Watching Mark walk through a German pub playing a giant drum was pretty crazy. But the wildest thing in there was when I realized the German singer was singing Country Roads with this thick German accent.” — Suzi 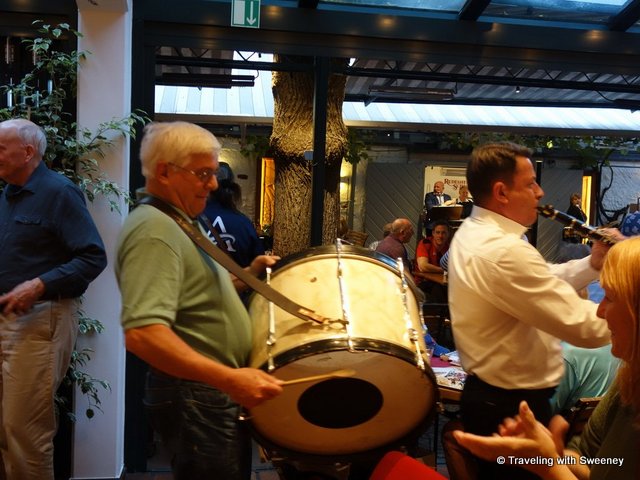 Mark playing the giant drum with a wooden spoon in Rüdesheim

Suzi and Mark were also enthusiastic game players during on-board entertainment in the lounge. You’ll definitely want to be on their team if you run into them on a cruise!

Citing the kind and friendly service provided by Tialfi staff and program director Morgan, Suzi and Mark are inspired to take future cruises.

“This was my first river cruise but I can’t wait to go on another one. I didn’t feel that way after taking Caribbean cruises. My father is from Czechoslovakia and I’ve always wanted to go there. So I think I want to go on a cruise that will end in Prague.” — Suzi

And then along comes Mary

With Mary at the Hohenzollern Bridge in Cologne

Also on the Rhine Getaway cruise was Mary, a Wisconsin woman celebrating her retirement with several weeks in Europe traveling solo.

“I usually traveled to get away from the stress of my job for two weeks to a month — up to six months since I retired. This was my very first cruise and my first trip alone to Europe.” — Mary

Mary was the first person I met on the ship on arrival day. We hit it off right away and enjoyed being on some tours together and sharing many meals and laughs as we traveled the Rhine. I asked her how she felt about being a solo traveler on the cruise.

“I felt very safe and included in all the activities, even though most people were couples. I felt like a queen for the week I was on the cruise.” — Mary

With Mary, Mr. TWS and I explored Cologne, Germany on a morning walking tour, stopping for a taste of Kölsch beer, crossing the Hohenzollern Bridge to the KölnTriangle observation deck to see spectacular views, and finally having a tasty German lunch at Peters Brauhaus. 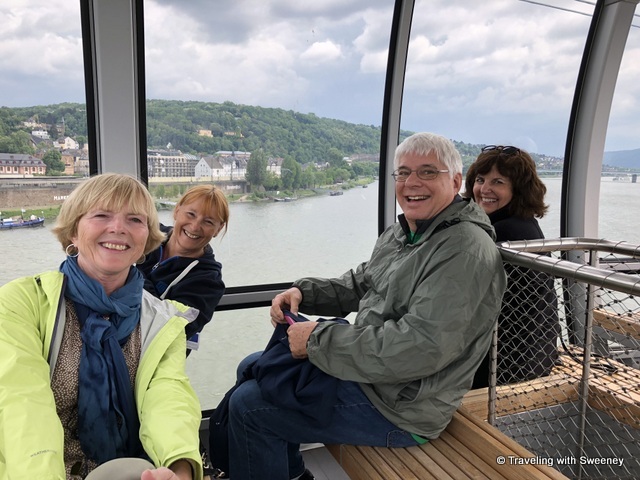 Cable car ride in Koblenz (from left: me, Mary, Mark and Suzi)

With Suzi and Mark, Mary was part of our group that decided to take the cable car in Koblenz from the dock to Ehrenbreitstein Fortress on a hilltop across the river. What a fun experience that was! It was kind of exciting (and out of the comfort zone for a few of us) and provided some great views of the city and river.

“I really enjoyed the ability to just be myself and meet people from all over the United States, becoming good friends with some of them.” — Mary

Newlyweds on their honeymoon 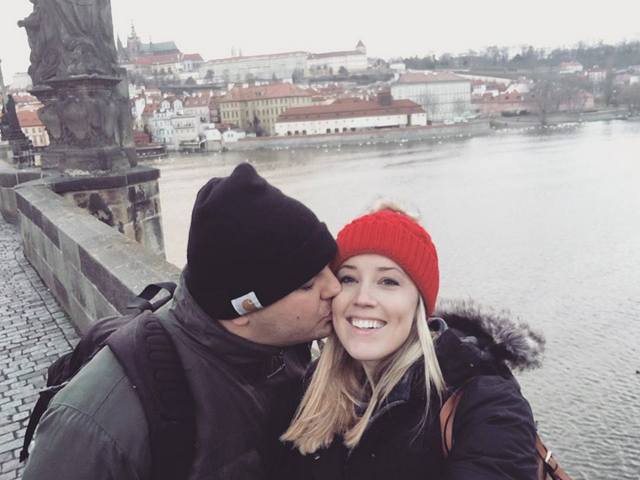 Newlyweds Hillary and Brian love their hometown of Charlotte, North Carolina where Hillary is a residential real estate agent and Brian is a project manager for a commercial construction company. This was Hillary’s second Viking cruise (she cruised in France with her mom) and Brian’s first.

“Brian loves history so he loves the educational side of traveling and I love the cultural side and getting to meet new people.” — Hillary

From our observations, they were among the youngest guests on our Romantic Danube cruise and so much fun to hang out with during meals and dancing in the lounge. Aboard a ship with a seemingly large representation of baby boomers, it was evident that people of all ages can interact and have fun together while enjoying the cruise. I asked if they would recommend river cruising to others of their generation.

“We absolutely would. Although we were part of the younger crowd, we still felt it fit our needs in every way and are looking at doing more in the future. We’re thinking Asia next.” — Hillary

During the ship entertainment one evening, we all cheered Brian on to victory in a stein-holding contest on board. (Unfortunately, I lost the women’s stein-holding competition.) 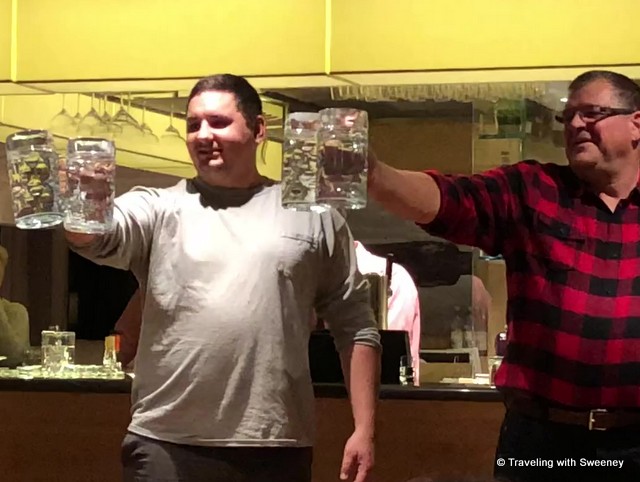 Brian (left) close to victory in the stein-holding contest

Of course, it seems perfectly romantic that Hillary and Brian chose the Romantic Danube cruise for their honeymoon.

“We enjoyed spending time with each other. Being our honeymoon, that was our first trip just the two of us exploring new cities.” — Hillary

Girlfriends on a getaway 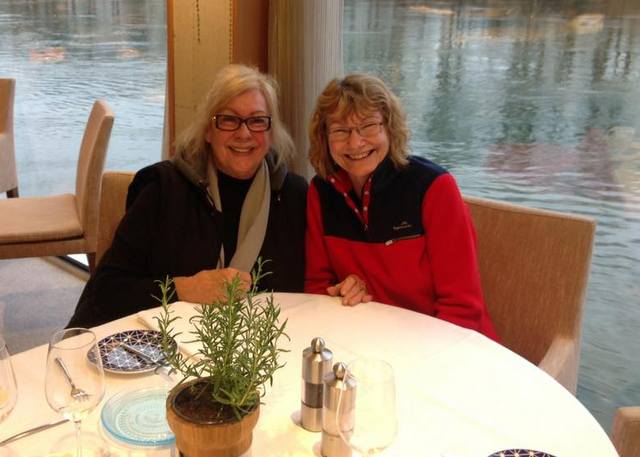 Monika is a happily retired woman from Victoria, Australia with a passion for seeing the world. An avid traveler, Monika’s favorite destination is Europe. She likes to do one European trip and one or two within Australia each year.

When we met Monika on our Viking Danube cruise she was traveling with her good friend, Carol. Seeing how much fun they were having, it was apparent that river cruising could be a great idea for good friends who like to travel together.

“It was a perfect getaway for Carol and myself. We had the choice as to whether we would participate in the same excursions or take different ones.” — Monika

Like us, they were in the holiday spirit as we cruised along the Danube visiting beautiful ports like Budapest and Vienna.

“Budapest — the most beautiful place imaginable. The sculptures, buildings, and countryside — I could not have imagined such beauty.” — Monika

Monika and Carol were both joys to hang out with — particularly in the lounge in the evening where we shared our experiences after full days of sightseeing, Christmas markets, and delicious meals. We also had a great time dancing and participating in on-board entertainment. 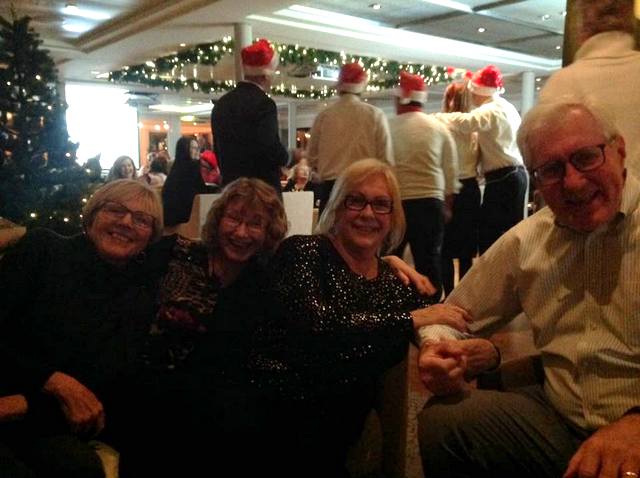 “I only have wonderful things to say about the Gullveig. The rooms were kept immaculately, nothing was any trouble for any staff member. Service next to none.” — Monika

Monika and Carol have enjoyed other travels together and have their next trip planned for the fall when they’ll be visiting the Greek Islands by land and ferry, followed by a Viking cruise from Rome to Barcelona. Sounds perfect, doesn’t it?

We met Ron and Judy (shown in the photo below next to Mr. TWS and me) on Viking’s Portugal’s River of Gold cruise. They are a fun couple with extensive cruise experience — ocean and river. In fact, they’ve just returned from Viking’s Into the Midnight Sun cruise from London to Bergen, Norway. 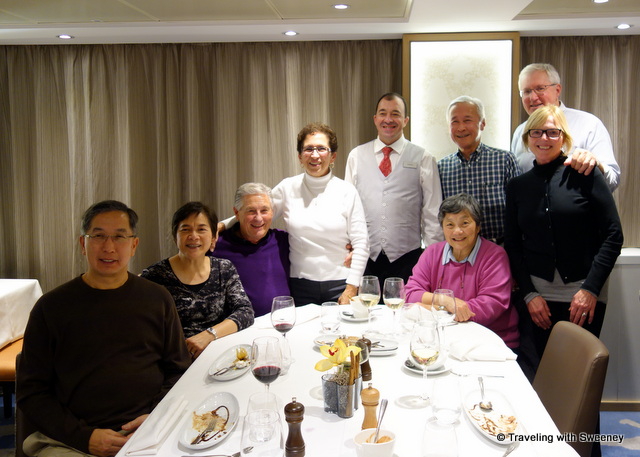 Mr. TWS and I were so glad that we were welcomed into such a lively group (Ron, Judy, and two other frequently cruising couples) on our very first cruise. Their company gave us extra reason to look forward to dinners besides the wonderful regional meals aboard the Viking Hemming. 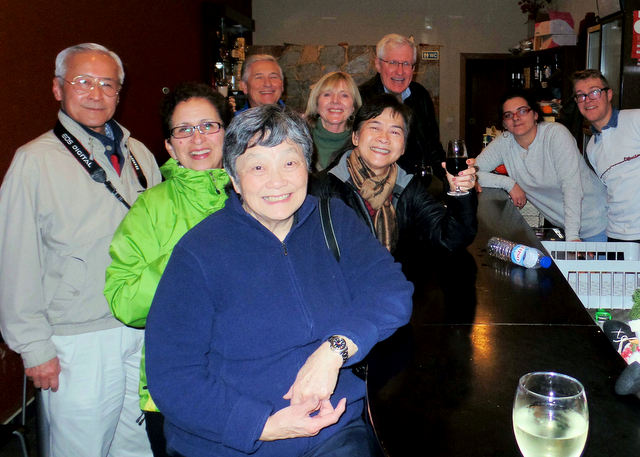 I’ll always remember stepping out to the quiet little village adjacent to dock where our little group went after dinner. There was a small bar where we sat to enjoy a glass of port (or two) and enjoy the ambiance — savoring the moment.

It’s about the memories

A cruise experience can be much more than an itinerary of port stops in amazing places or a serene scenic journey. If you’re open to it, you can learn about your fellow cruisers, make on-board friendships — some that may continue well afterwards — and give you a lot of fond memories.

To Suzi, Mark, Mary, Hillary, Brian, Monika, Carol, Ron, Judy, and all the other interesting, fun, travel-loving people we spent time with on these cruises …

Thanks for the memories and letting me introduce you to TWS readers.

Disclosure: Thanks to Viking River Cruises for the awesome hospitality and opportunity to meet these nice travelers. 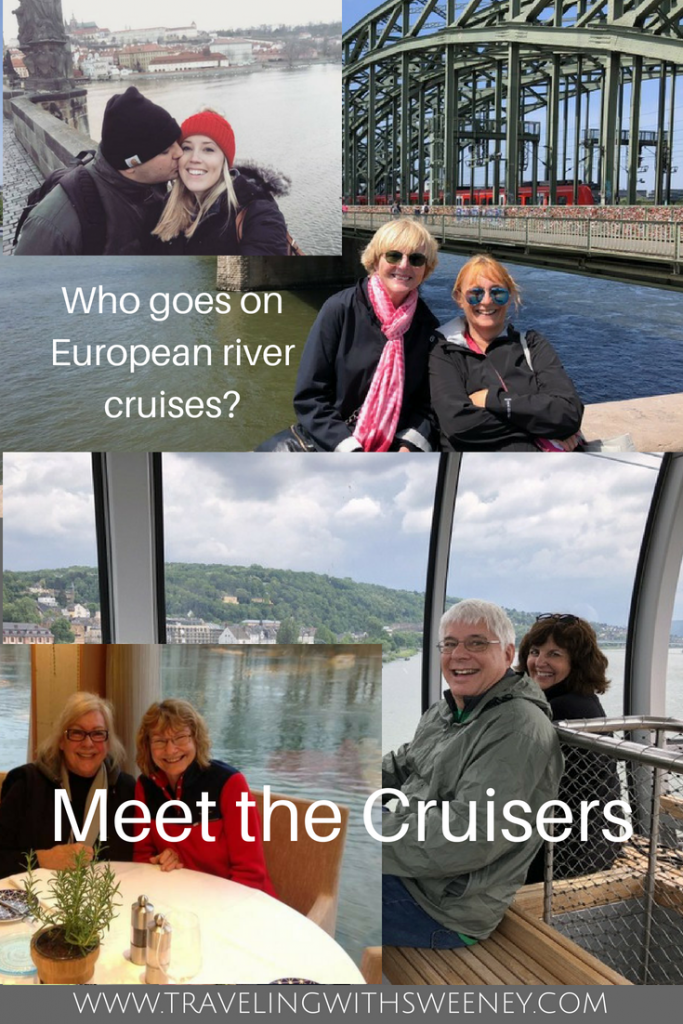 6 thoughts on “Meet the Cruisers: The Nice People You Meet on a River Cruise”