Widely known as artistic inspiration for Vincent Van Gogh, Arles captured my imagination as I strolled its winding streets admiring well-preserved medieval buildings and other historic sites at every turn. But among the most intriguing scenes in this city in Provence were those of ancient Roman ruins and Romanesque monuments dating back to the 1st century B.C. that form the basis of the city’s designation as a UNESCO World Heritage Site.

The Romans loved the city of Arles, growing it to be the second largest city after Rome. Even today, evidence of their prolific building continue to be found in archaeological discoveries, often delaying new construction as experts examine the findings.

The Roman Amphitheater (Arena of Arles)

In ancient times, gladiators fought to the death and chariots raced before crowds of 20,000 spectators in the imposing two-tiered Roman Amphitheater of Arles, inspired by the Colosseum in Rome. 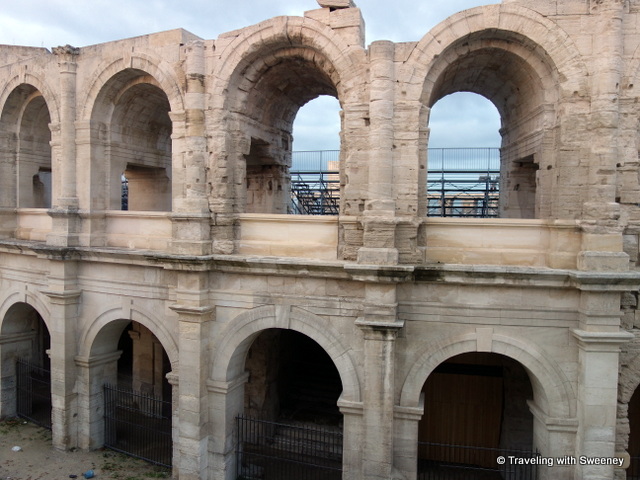 The impressive architecture of the arched passageways where people entered (shown below) gave me an eerie feeling knowing the violence that they cheered inside. 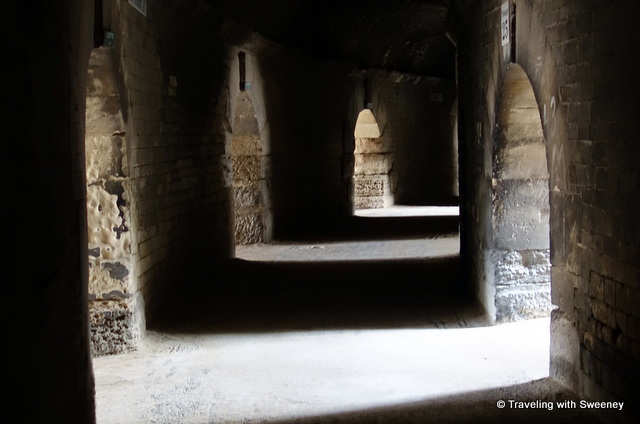 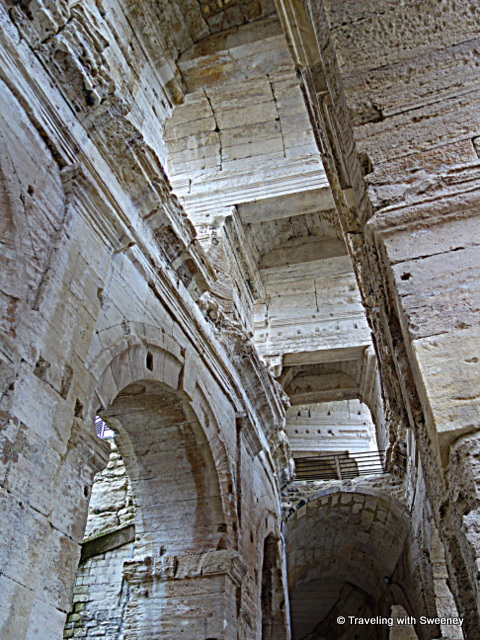 Looking up inside the Roman amphitheater

For the students in the photo below, “gladiator training” is bringing history alive — especially with their authentically-attired instructor in the center. 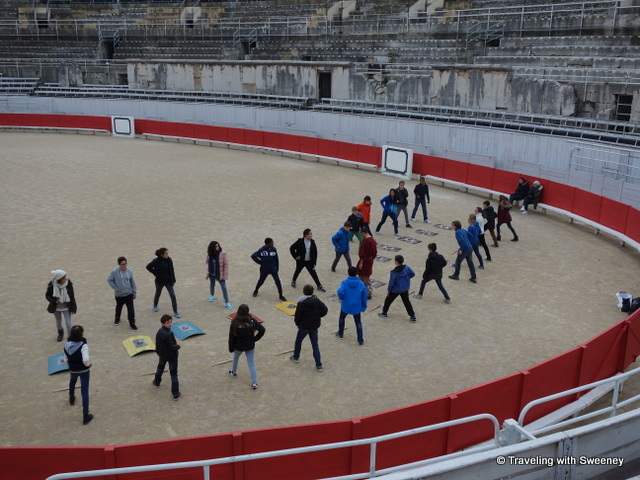 The juxtaposition of the amphitheater to the old, yet still much newer, architecture across a narrow street creates a dramatic effect at night. 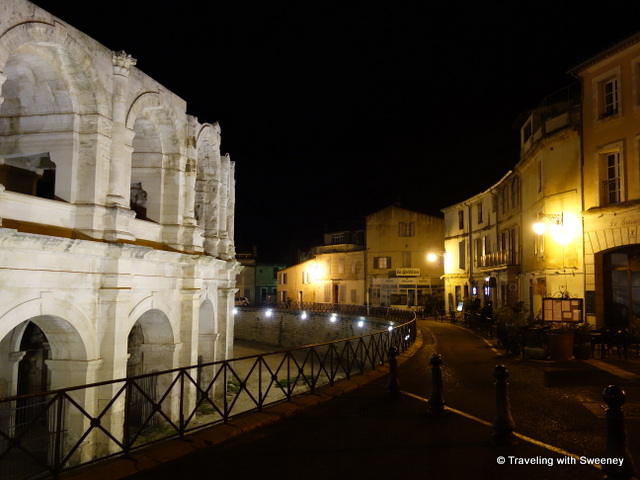 Roman arena and quiet street in Arles at night

With the fall of the Roman Empire in the fifth century, the arena was transformed into a fortress with four towers to protect the population. 200 houses with a public square and two chapels were enclosed in the center. In the late 18th century the arena’s role changed to that of a national historic monument.

There are strong Spanish ties in the region of Provence and bullfights are held here from late spring to early fall. The arena is also used for concerts.

The Roman theater also dates back to the 1st century B.C. May of the relics excavated from the theater are in the Arles Archaeological Museum, but the most famous piece, the Venus d’Arles, is in the Louvre. Much of the theater’s original stone was removed and used for other construction over the centuries, but two columns,benches for spectators, and marble flooring remain. 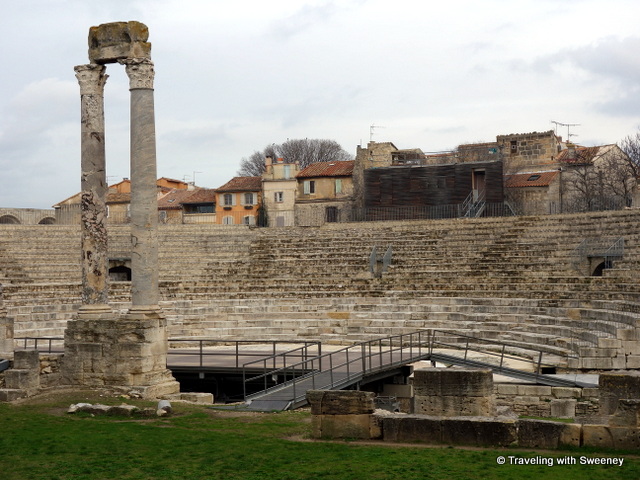 The U-shaped Cryptoporticos are underground galleries built in 30-20 B.C. forming the foundation of the ancient forum. 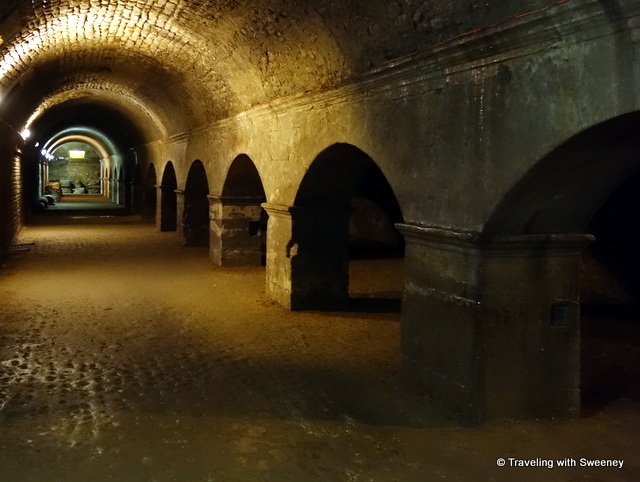 Parts of the forum’s columns can still be seen on the facade of a building (below left) on the Place du Forum. Other sections (some pictured above at the end of the corridor) are in the Cryptoporticos . Today, City Hall (which provides the entry to the Cryptoporticos) and the Chapel of the Jesuit College are located above the foundation. 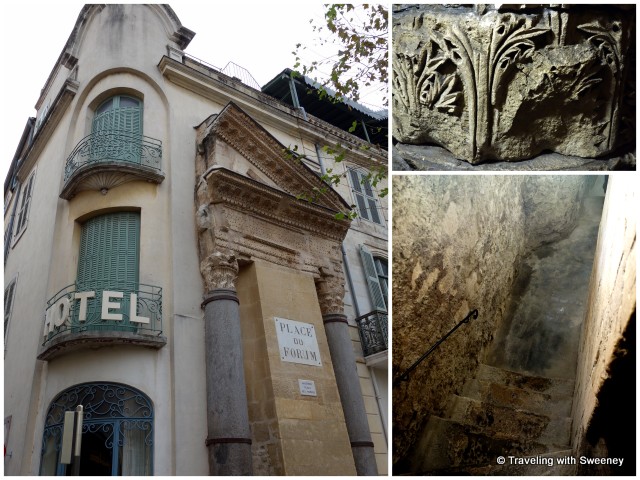 The Church of St. Trophime

Arles continued to thrive for centuries after the Romans, as can be seen at other historic sites acknowledged by UNESCO designation. The Church of St. Trophime and its cloister, built in the 12th century, are considered to be masterpieces of Romanesque architecture. Today, the cloister is used for special events including the international santon-makers fair showcasing the art and craft of santons, (“little saints”), important figures of Christmas traditions in Provence.

Other sites recognized in the UNESCO designation of Arles are Roman baths, ramparts, and the graveyard of Les Alyscamps.

For more information about visiting Arles: 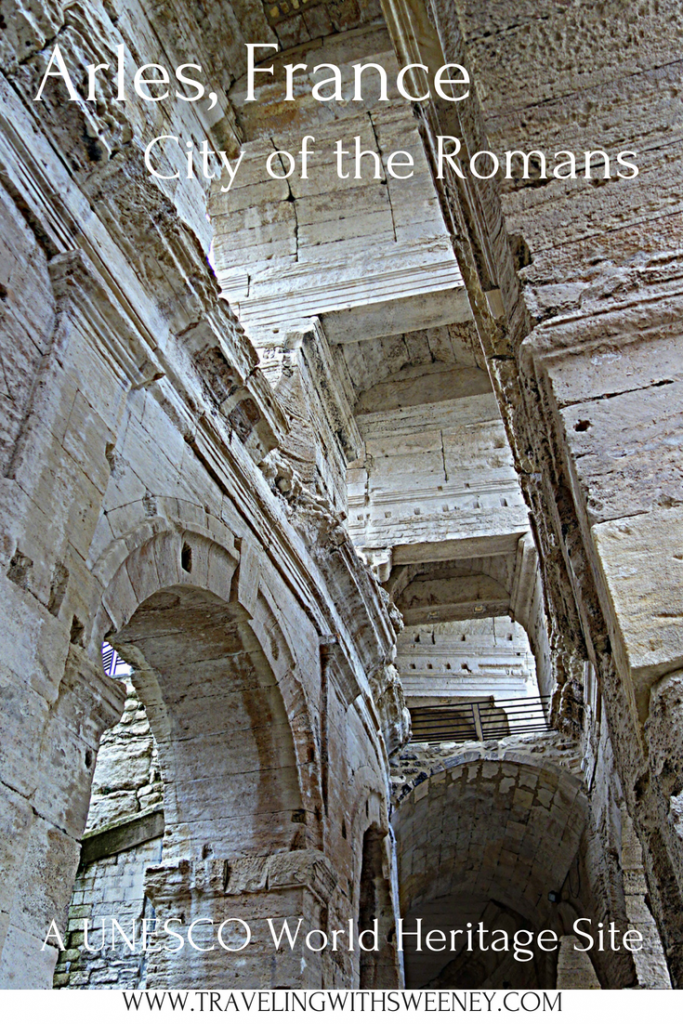 20 thoughts on “Arles, France: City of the Romans”