Update December, 2020 — According to the website operated by Palais des Papes (Palace of the Popes) and Pont Saint-Bénézet (Saint-Bénezet Bridge), these landmarks in Avignon will reopen to the public beginning December 15, 2020 from 10am to 5pm every day. Non-essential businesses and public venues had been closed by the French government on October 28, 2020 due to stop the spread of COVID-19. For up-to-date information contact the Avignon Tourist Office by phone at +33 (0)4 32 74 32 74, by e-mail at officetourisme@avignon-tourisme.com, or visit their website.

Most people associate popes with Rome. But key to Avignon’s designation as a UNESCO World Heritage Site, the Palais des Papes (Palace of the Popes) is an interesting and very important part of European and papal history.

The story of the popes in Avignon begins in the 13th century when the King of France had a feud with Pope Boniface VIII. After the pope’s death and months later the death of his successor, Clement V, a Frenchman, was elected pope and he chose to stay in France rather than move to Rome. Between 1309 to 1377, seven popes lived in the Palais des Papes in Avignon, not Rome. During this period, Avignon became a major capital of the world with its population rising from about 5,000 to over 30,000. 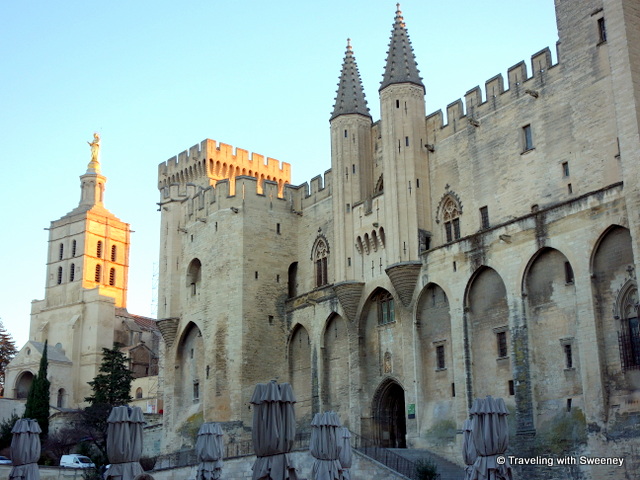 Surrounded by 4.5-km of ancient ramparts, the palace took almost 20 years to build during the papacies of Benedict XII and Clement VI, and it’s the largest Gothic palace in Europe. There are 25 rooms open to the public, including the private apartments of the pope and grand rooms that were used for formal ceremonies and banquets. The adjacent Romanesque Cathedral of Notre Dame des Doms is also included in the UNESCO World Heritage designation.

Frescoes in the papal apartments, sculptures, and other design features shown below represent the work of many artists who came to Avignon during Pope Clement VI’s papacy. 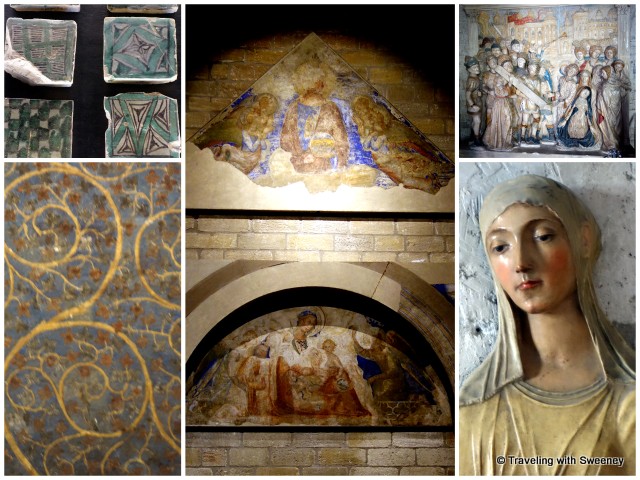 Mosaic tiles, frescoes and sculptures (St. Catherine of Siena [right] was instrumental in bringing the papacy back to Rome.)

Below left is one of my favorite scenes from inside the palace where I could imagine the popes sitting and gazing through the window at the Provençal countryside. The “Window of Indulgences” on the right is where the pope blessed the faithful in the central courtyard outside below. 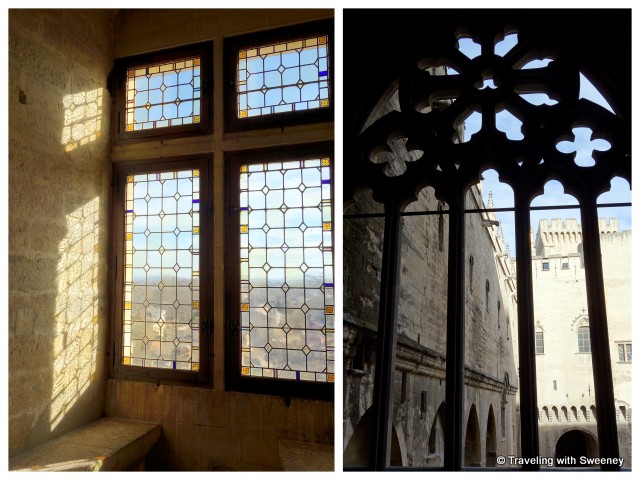 Another famous and beautiful site included in the Avignon UNESCO designation is the Pont Saint-Bénézet, known as Pont d’Avignon. You may have heard of the 15th century children’s song about the Pont d’Avignon. It begins, “Sur le pont d’Avignon on y danse, on y danse…” which translates to “On the bridge of Avignon, we all dance …”. The song added to the allure of the bridge for me.

Pont St. Benezet (Pont d’Avignon) “….. On the bridge of Avignon, we all dance there in a ring”

Legend has it that Saint Bénézet was divinely inspired as a 12 year old boy to build a bridge in Avignon and that a very large stone he inexplicably threw into the water became the support for the first arch. Originally built with wood in the 12th century, it was rebuilt in stone in the 13th century. Successive flooding of the Rhône River continued to damage the bridge and now only 4 of the original 22 arches remain.

17 thoughts on “Avignon, France: City of the Popes”