UNESCO Sites on the Rhine

Some of the most amazing places of natural and cultural significance we’ve visited in Europe have been those designated as UNESCO World Heritage Sites. We’ve featured quite a few of them in our blog posts, most recently the sites in Arles and Avignon, cities in the Provence region of France with rich cultural heritage. Among other selection requirements for UNESCO sites is that they “represent a masterpiece of human creative genius”. In this post, we’re featuring UNESCO locations we visited as part of land excursion tours included on our Viking Rhine Getaway cruise. If you are cruising or otherwise exploring this area, I hope you’ll get a chance to visit these interesting UNESCO sites on the Rhine.

Strasbourg is a captivating city that exemplifies the dual French and German influences of the Alsace region of France due to several changes of rule in past centuries. I’d previously heard a lot about the fantastic Christmas markets in the city, but did not know of its blend of medieval heritage and progressive EU identity. The city has a wealth of historic and architectural landmarks as well as a vibrant progressive ambiance in the modern European District.

While our morning walking tour was focused on the historic city center, Strasbourg is also the official seat of the European Parliament and home to the 2nd largest university in France.  Let’s take a walk.

Strasbourg earned its UNESCO designation in 1988 for the Grande-Île (an island surrounded by the Ill River and the Canal du Faux-Rempart), the historic center of Strasbourg. In 2017, additional recognition was bestowed by UNESCO for Neustadt (new town) built during German governance between 1871-1918. 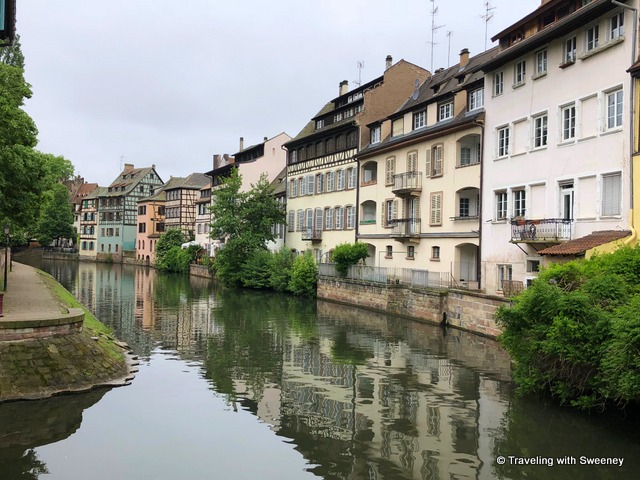 Grande-Île is connected to the rest of Strasbourg by 21 bridges and pedestrian bridges. The Petite France area of the island is perfectly picturesque with its peaceful parks, narrow lanes, and meandering canals lined with colorful medieval half-timbered buildings (shown above). 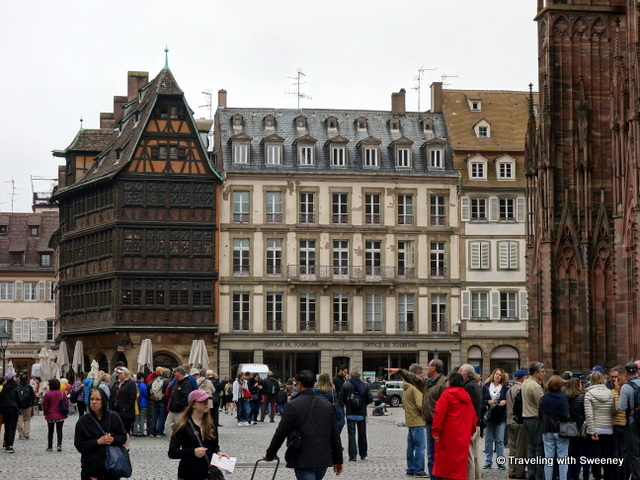 A top site to visit during a tour of the city is the Cathédrale de Notre Dame, considered to be a masterpiece of Gothic Art, to admire its detailed Gothic architecture, sculptures, and stunning interior. Construction of the cathedral was completed in 1439. Also on the Place de la Cathédrale is Kammerzell House built in 1589 (now a restaurant) with its impressive carved timbers and ornate panels shown in the photo above. 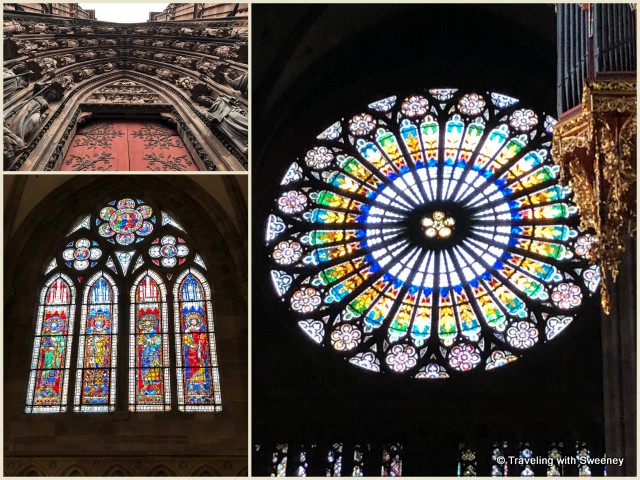 Cathedral tip: If you’ve got the time and energy, you can take a spiral staircase (332 steps) to a viewing platform for views of Strasbourg. For current schedules and rates: Climbing up to the cathedral platform

We enjoyed soaking up the ambiance while walking around with our guide and then by ourselves for a while, but you might want to take time to eat or have a beverage at one of the many cafes and restaurants lining the streets and squares or visiting a few museums. For more information about activities in Strasbourg: Strasbourg: The Jewel of Alsace.

Alsace travel tip: From Strasbourg, you can easily visit villages and wineries on the Alsatian Wine Route as we did on another Viking excursion.

It would be impossible to miss seeing this stunning UNESCO site from any vantage point in Cologne, Germany. Towering above the old city of Cologne is Kölner Dom (Cologne Cathedral). But don’t just admire it from the outside. Be sure to look at the treasures of the enormous interior and take get a spectacular view of the city from the tower. The view in the photo below is from the observation deck of Köln Triangle, an office building across the Rhine. 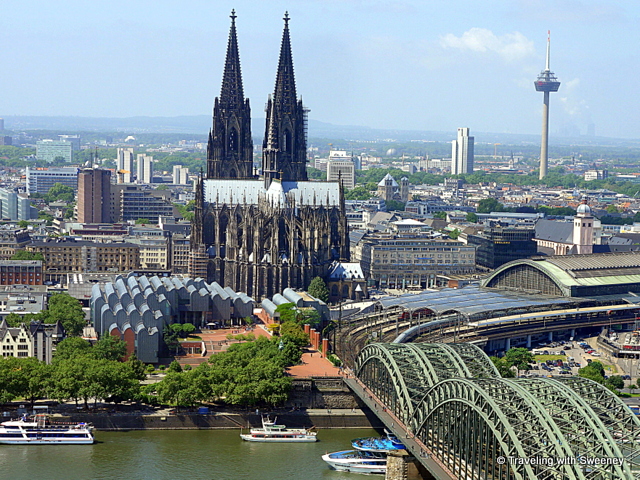 Cologne Cathedral viewed from Koln Triangle across the Rhine

Although we had toured Cologne Cathedral, a UNESCO World Heritage Site, on our first visit we loved a second time through to admire the gorgeous architecture, stained glass windows, works of art and relics. This amazing Gothic cathedral was built between 1248 and 1880 and is so large and striking that from the outside it’s almost too imposing to take in. It’s always a joy to gaze upon the cathedral from many vantage points around the city. We still remember how awed we were at first sight as we emerged from the train station on our first visit.

The city of Cologne was heavily bombed during World War II, but the cathedral was left largely undamaged. It’s said that it was not targeted because it was such a large prominent navigational landmark for pilots and in respect for its cultural significance.

Additional UNESCO tip: While at port in Cologne, Viking guests can take an optional tour of  the Bruhl UNESCO Palaces of the 18th-Century, including Augustusburg Castle built for the prince-archbishops of Cologne.

If you love to gaze upon castles and imagine a life of royalty in times gone by, There are plenty of them to see and visit in this beautiful area of the Upper Middle Rhine Valley. 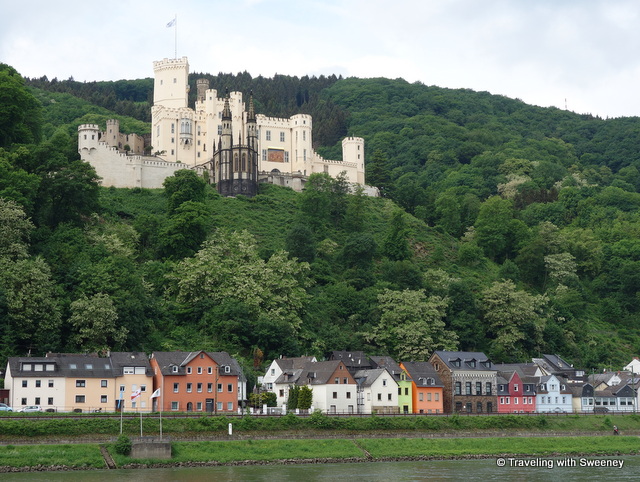 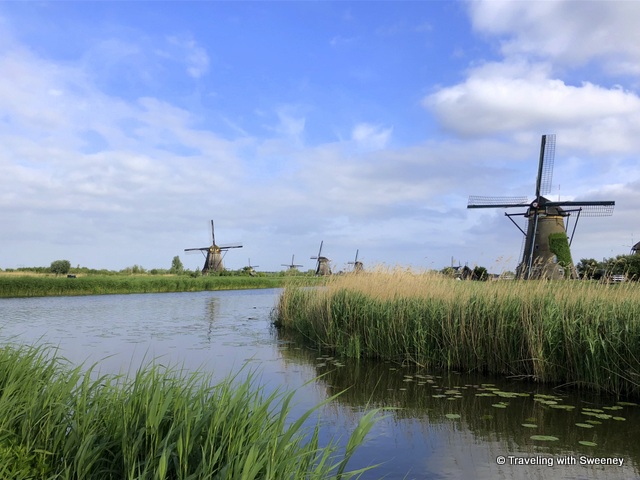 Designated as a UNESCO World Heritage Site in 1997, the windmills and water management systems of Kinderdijk in the South Holland region of the Netherlands are described to be “as Dutch as Dutch can be”.

Our ship docked within walking distance of the windmills. Crossing over a dyke, we got our first good look at the expanse of windmills and noted that they are actually at a lower elevation than the ship. The sight of the windmills on the grasslands represents an iconic image of Holland.

Without the natural and technological systems of the windmill networks, 40% of the Netherlands would be underwater and the other 60% would be at great risk. The complex at Kinderdijk includes 19 windmills (built in the mid-1700s) and pumping stations, dykes, and reservoirs. It was especially fun to go inside one of the windmills to get a glimpse of a miller’s life of days gone by.

Kinderdijk bike tour tip: Bicycling through the grasslands of Kinderkijk is a great way to see the windmills and get a bit of exercise, too. That is one of the optional tours offered by Viking on the Rhine Getaway cruise.

Thanks to Viking River Cruises for the introduction to these wonderful sites and providing the excellent guides on our tours. 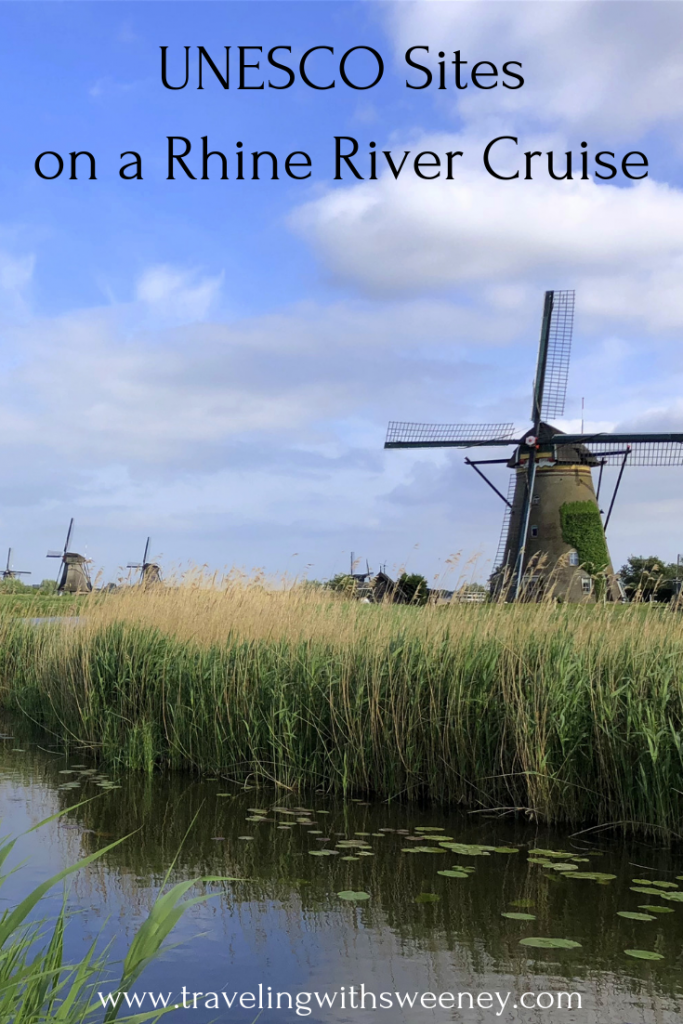 19 thoughts on “UNESCO Treasures on the Rhine: Sites to Visit on a River Cruise”