Just a few weeks ago, this was the view from my Casp74 apartment in Barcelona’s Eixample district. I felt like a local, even if just for a few days, getting the spirit of “la rauxa i el seny”. Characteristic of Barcelona culture, “rauxa i seny” is variously interpreted as a mix of avant garde and common sense, impulse and sanity, spontaneity and measured process, madcap and businesslike. “Rauxa i seny” is the essence of Barcelona’s modernista design and prominently showcased in the Eixample.

Eixample, meaning “expansion” in Catalan, was developed in the late 19th/early 20th centuries because of the overcrowded, disease-filled areas of Old Town, Barri Gòtic. It was designed to be life-enhancing area, bringing in the light and fresh air missing from the old town south of it. A distinct characteristic of the Eixample is the community gardens, like the one in the photo, that form the central areas of the buildings of each neighborhood allowing all buildings to get light during the day. Most of the city’s famous modernista architectural gems are located in the Eixample, including Antoni Gaudi’s famous works Sagrada Familia, Casa Milà and Casa Batlló. It’s also the heart of contemporary design in Barcelona.

I had an excellent introduction to Barcelona’s “rauxa i seny” design culture in Context Travel’s two hour Made in Barcelona walking tour. Our guide, Suzanne Wales, is a writer and consultant who specializes in design, art and architecture.

These are a few of the highlights I enjoyed along the way.

Our group met in the lobby of Hotel Omm on Carrer Rosselló just off of Passeig de Gracia, a major Barcelona avenue where our tour was concentrated. When the hotel opened 10 years ago, it was the first design hotel in the city and is itself an example of vibrant creativity and sensible design. The curved sections of the stone façade allow optimal street views, sunlight, sound and privacy for the guests. 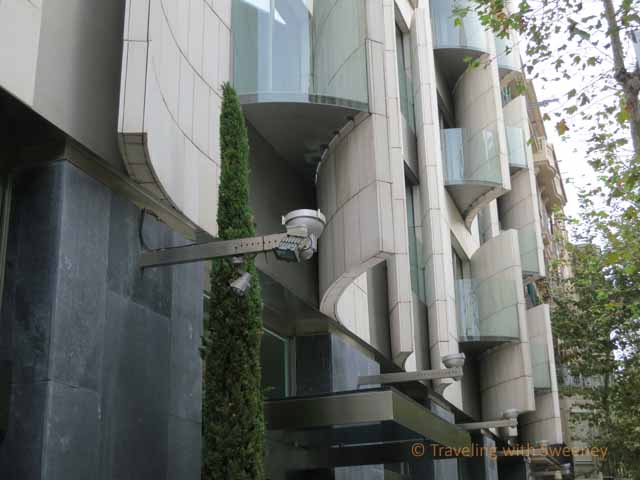 Inside are many stylish and whimsical touches, such as this red flowing sculpture in the lobby restaurant, Moovida. 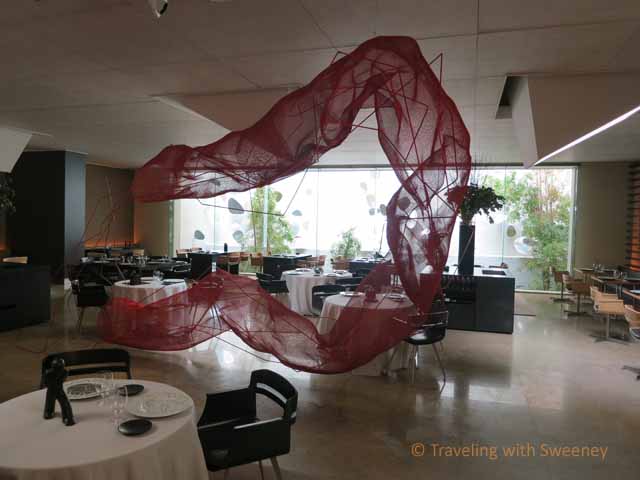 From the hotel’s rooftop, I got a view of the back side of Gaudi’s La Pedrera (Casa Milà) sprouting its unusual chimneys at the top that are nicknamed “espantabruixes” (witch scarers). 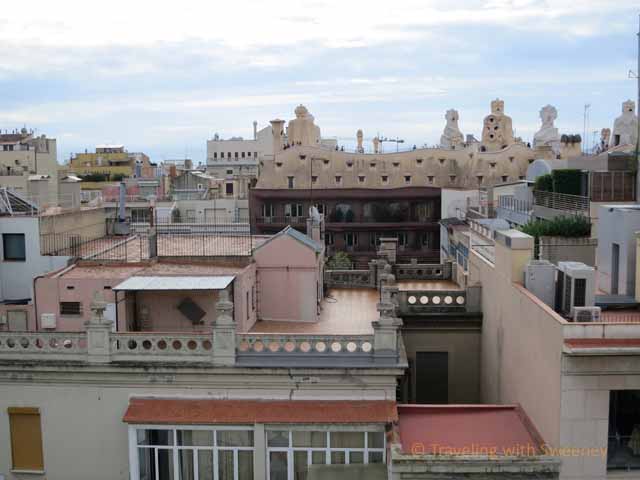 If you’re looking for unique or special contemporary housewares, furniture, decorative objects, and gifts, Vinçon might have just the right item for you. There is a surprisingly large and eclectic collection of offerings in this design emporium that was opened with the intent to bring design to the people. Many of the items are a combination of function, form, and art that might even amuse and entertain. Some of the lamps in the lighting department certainly seemed to fit that description. 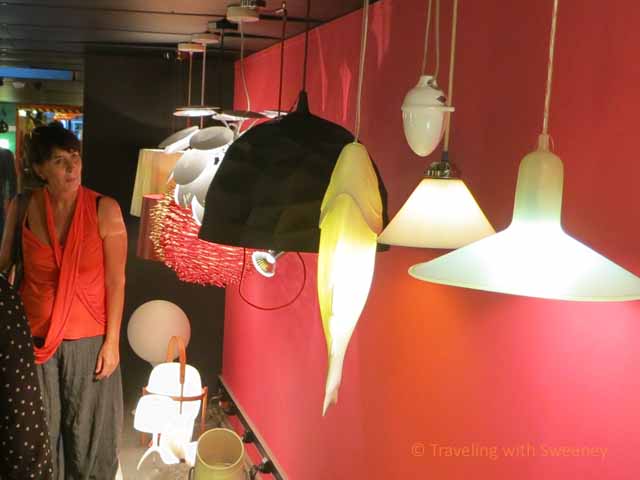 The building was once the home of painter Ramón Casas and his living area is part of the attraction with features such as beautiful mosaic tile flooring, a grand staircase and this large, ornate fireplace. 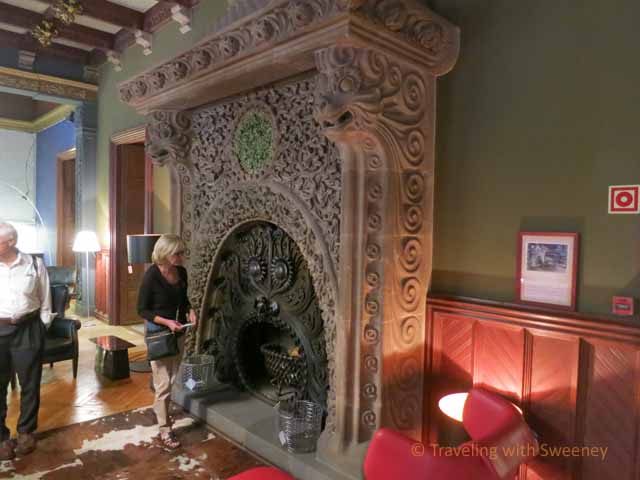 Vinçon is also known for its provocative changing window displays. On our visit, this one of men’s briefs was at the main entrance. 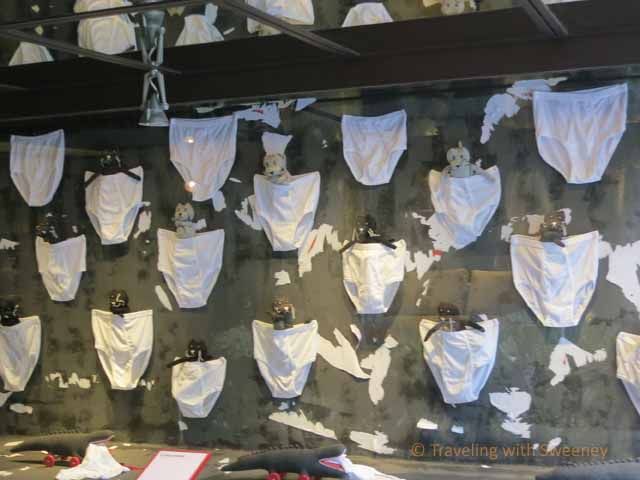 Celebrating its 60th anniversary this year, Lladró creates luxury hand-crafted porcelain figurines and home decor of various styles and disciplines. Pieces from Lladró designer Jaime Hayon’s Fantasy collection portray the “fusion of what can be done in porcelain with fantasy awakening the imagination”. 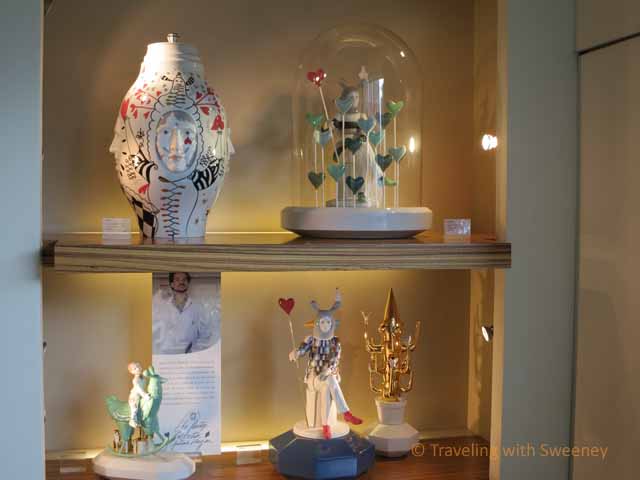 Originally built for a baron, this stunning building is now the headquarters for Casa Asia, a company that promotes trade between Asia and Spain. The architect, Josep Puig, who designed this Gothic-inspired building had also worked with Gaudi. The wrought-iron front door and interior staircase are just two of the building’s beautiful features. 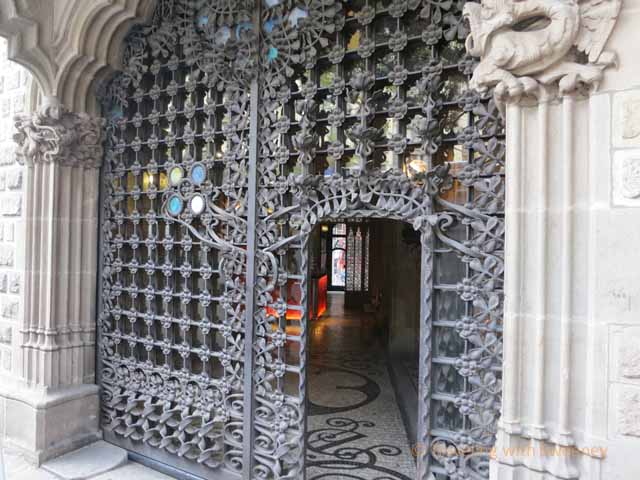 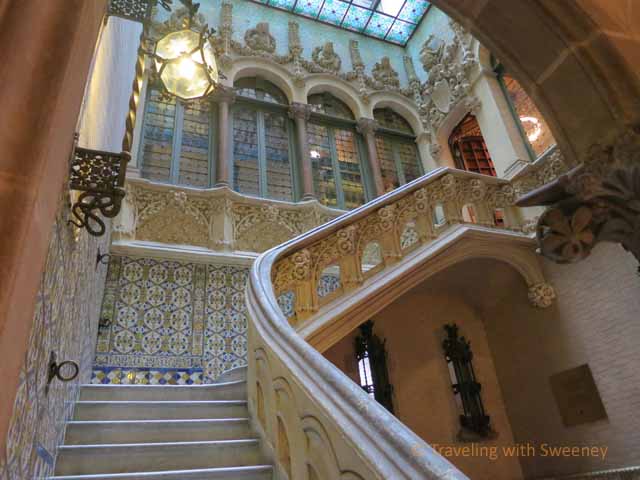 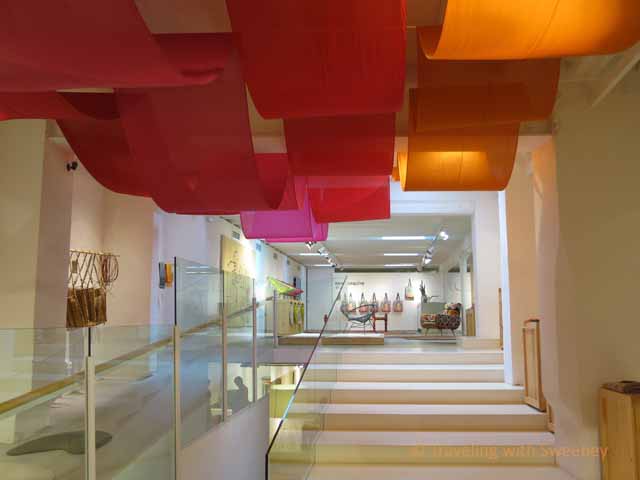 At nanimarquina, you’ll be encouraged to look, touch and even step on the designs. Founded by textile designer, Nani Marquina, this company has been designing rugs and other textile products since 1987. I loved the distinctive colors, textures, patterns and shapes of these meticulously handcrafted rugs and other goods in the shop, which is located in a renovated parking garage. Here are just a few of the extraordinary rugs that caught my eye. 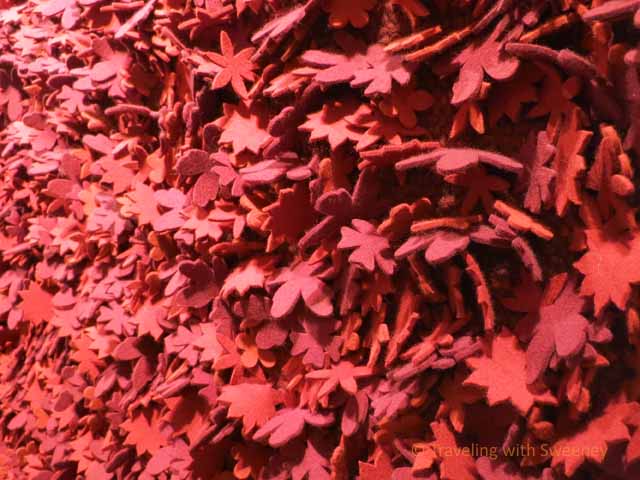 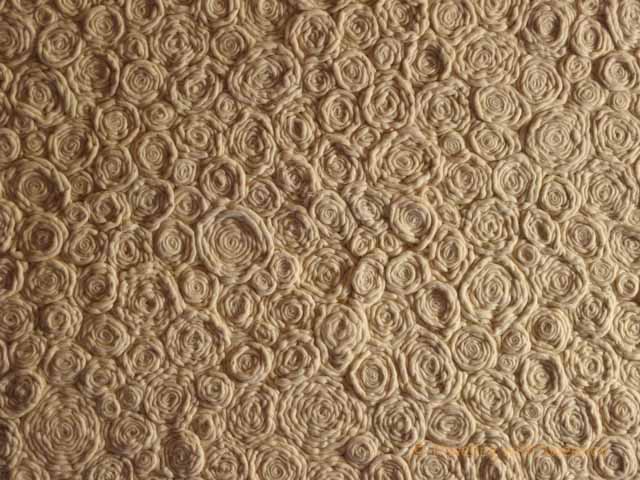 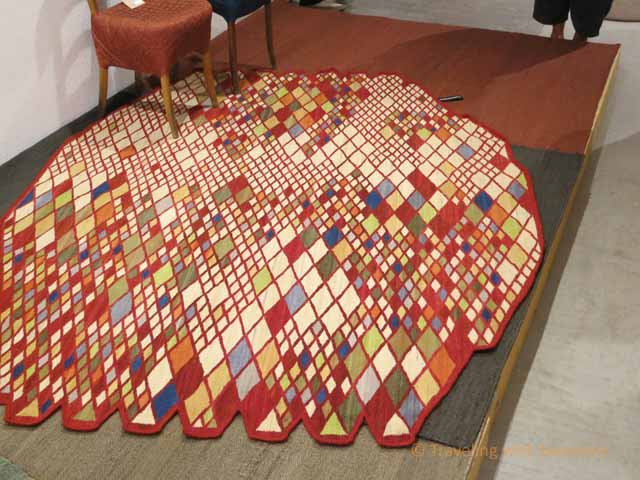 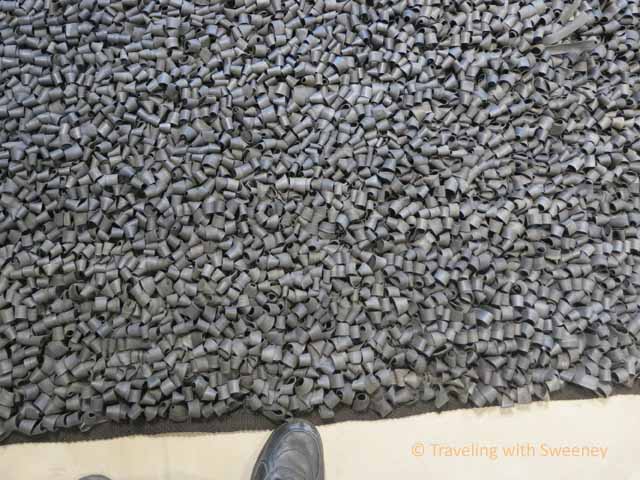 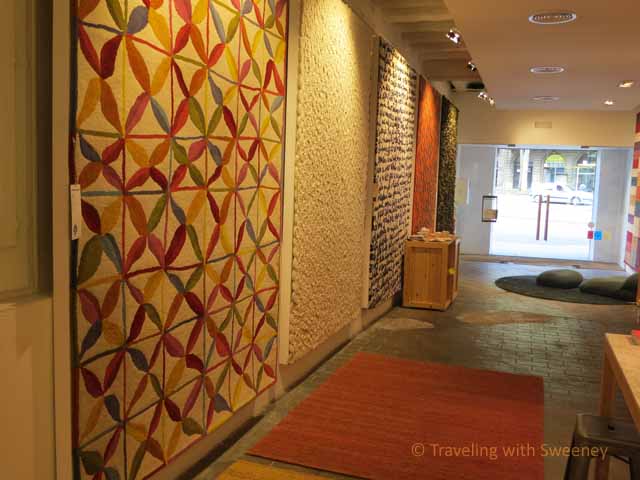 The Kala Rug was developed using drawings of school children in India. A portion of the proceeds from every sale of the rug go to the Care & Fair organization that fights against child labor in India. 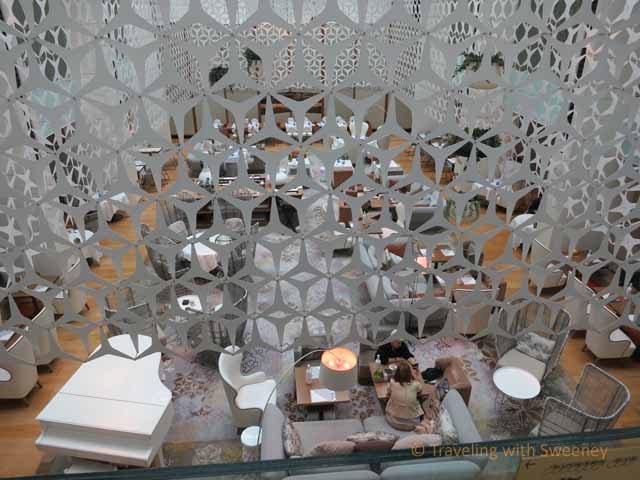 The Mandarin Oriental is located in a former bank building that was exquisitely remodeled by Spanish designer Patricia Urquiola who calls it a “Grace Kelly hotel” with its chic creamy colors and classic elegance. The photo is of Blanc, a restaurant on the ground floor in the center of an atrium with a hanging garden and much stylish detail. We’re looking through a screen of snowflake cutouts that goes around Blanc.

There’s really much more to see of Barcelona’s “rauxa i seny” design culture on the tour and learn from the expert insights of guides like Suzanne. I highly recommend Made in Barcelona tour for anyone interested in learning more about Barcelona’s design world. Thank you, Context Travel, for hosting my walk. 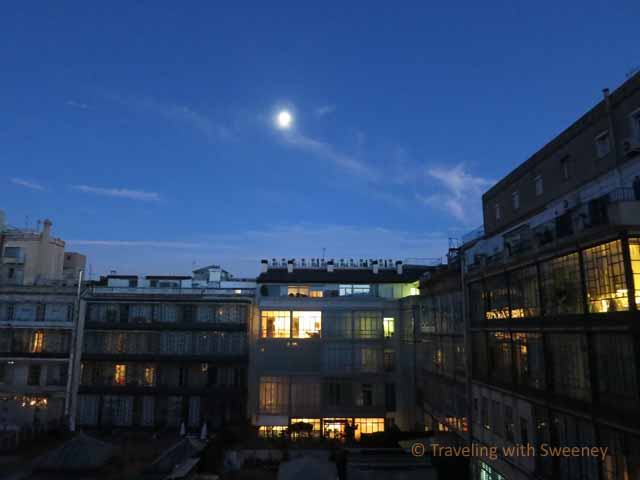 56 thoughts on “Rauxa i Seny Barcelona”