Symbolism abounds at Washington DC memorials and monuments. They mark major events, memorialize leaders and honor individuals who have been forces of change in America and the world. 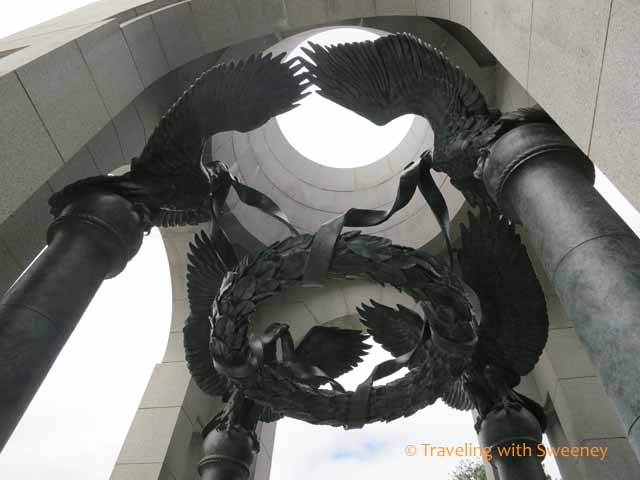 In remembrance of the men and women who have died in the service of the United States, we observe Memorial Day the last Monday in May. During my trip to Washington DC this past week, it seemed fitting to observe the upcoming holiday by visits to the World War II, Vietnam Veterans and Korean War Veterans memorials. I’d like to share these photos in honor of those who served in these past wars as well as those serving today for whom memorials have not yet been built.

This beautifully designed memorial is a moving tribute to those who fought in the Pacific and Atlantic theaters in World War II as well as those at home who supported the war effort. Two pavilions representing the Atlantic and Pacific theaters and 56 pillars for each state and U.S. territories are at either end of the memorial with a pool and fountain in the center. 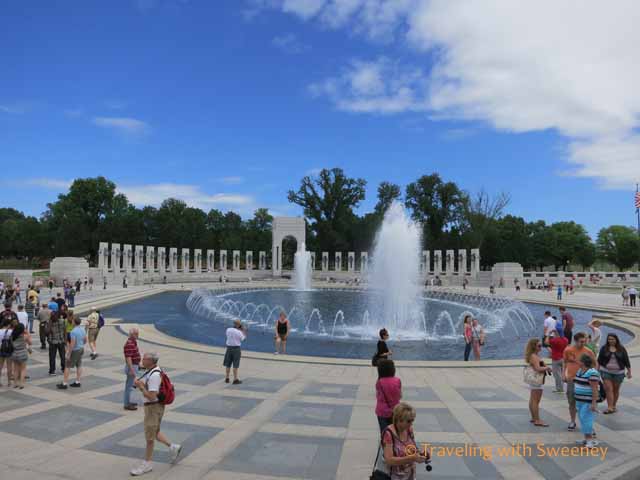 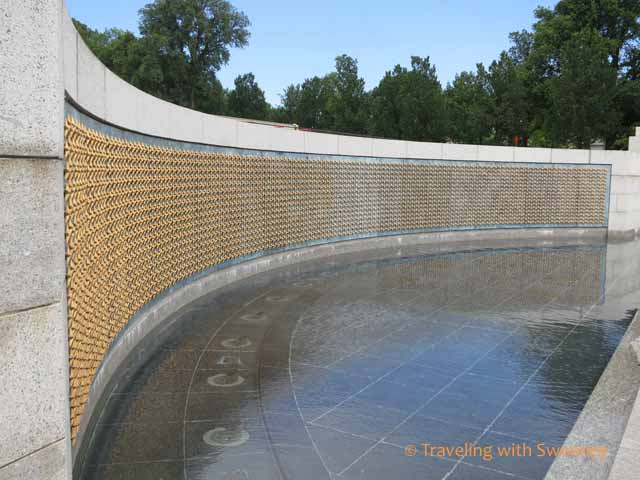 On the Freedom Wall there are 4,048 gold stars, each representing 100 who died. The words engraved in front of the wall are “Here we mark the price of freedom”. 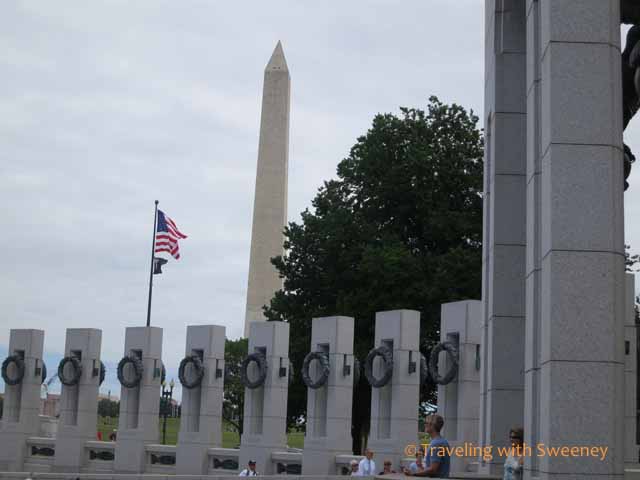 This was my first time at the Vietnam Memorial. I watched people touch the names of their friend or family member. Some traced the engraved name on a piece of paper. Others stood quietly in thought as they gazed at the 70 panels engraved with 58,261 names. 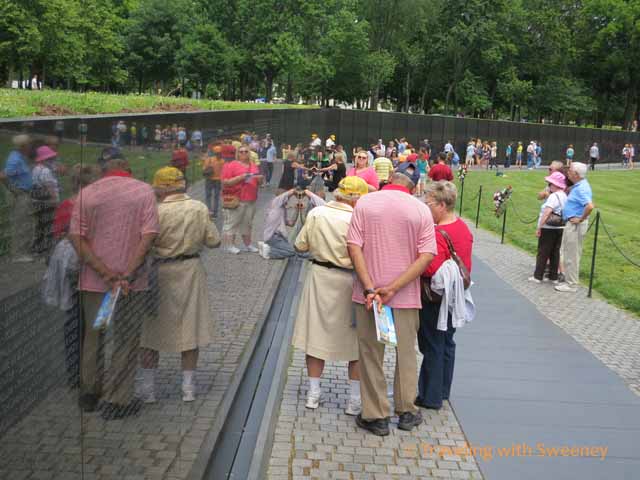 During the Vietnam War, the daily television news reported the updated death toll. All these years later, it’s an intense feeling to see the names of the American service people behind those numbers. 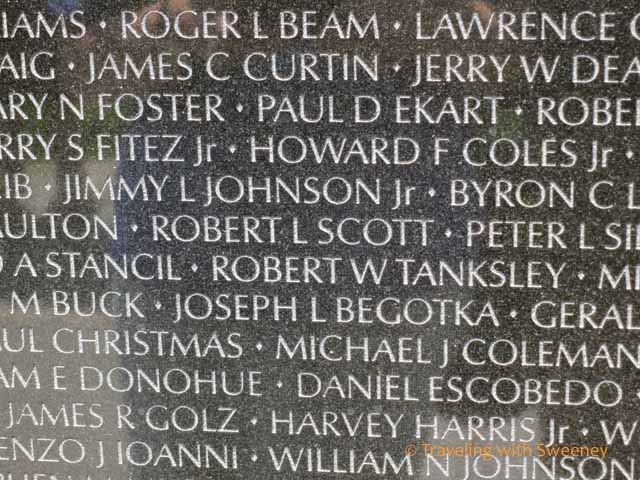 We found the name of my husband’s cousin who had died in Vietnam on this panel. I never knew him or the others whose names are shown here, but it would be hard not to feel emotional and reflect back on that terrible time in our history. 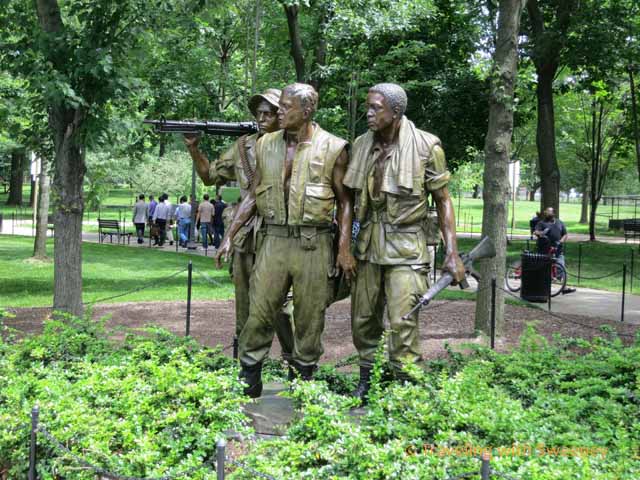 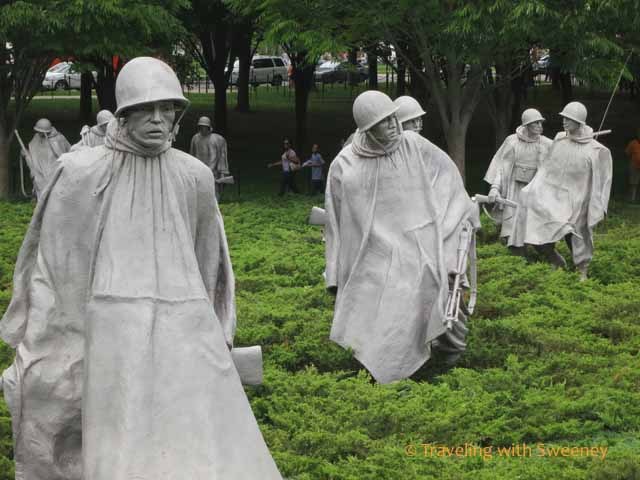 While there, I thought that it would have been nice to be able to walk among the soldiers, but perhaps that would have made it too overwhelming. I was fascinated by the expressions of determination, concentration and bravery etched on the faces of these statues. 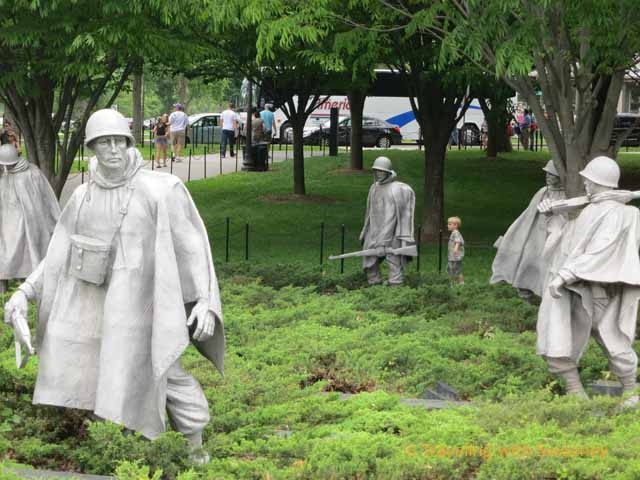 The young boy walking behind the memorial makes me think about what the future holds for war and peace.

After we landed in Chicago on the first leg of our flight from Washington D.C. to San Francisco last night, a flight crew member asked us to acknowledge with applause the members of the armed services who were on board. I hope the message they got from that form of appreciation was — “Thank you for your service.”