I’ve just returned home from a two week trip to the Midwest that included a few days in the Chicago area to visit family and friends and participate in Walk MS. Here is a slice of Chicago life for Travel Photo Thursday. 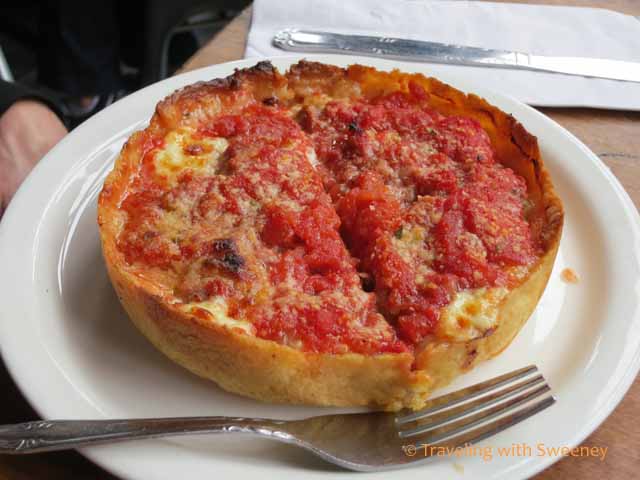 Actually, my individual serving of Malnati Chicago Classic pizza was more than one slice of deliciousness. It’s made with lean sausage, extra cheese and tomato sauce on Malnati’s own Buttercrust™. For many years, I’ve been a Gino’s East fan, but I might have found a new love. 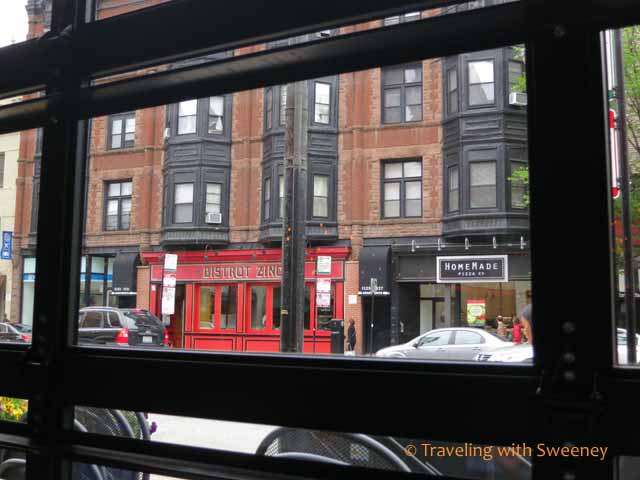 Across the Street from Lou Malnati's

Looking across State Street from Malnati’s while I devoured my pizza, I was reminded of the days when I worked in the city and this area of town was known for its many singles bars. But that’s not a story to be told here.

This bronze cow sculpture is on Washington Street in front of the Chicago Cultural Center. It was a gift to the people of Chicago for their enthusiastic support of the 300 fiberglass cow sculptures that were installed throughout the city in 1999 in the Cows on Parade public art exhibition. 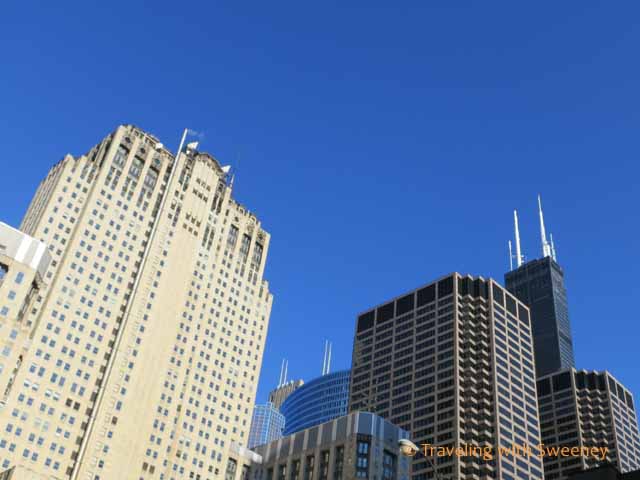 On the right in this photo is the top of the Willis Tower, known as the Sears Tower until 2009. Designed for Sears by Skidmore, Owings & Merrill, it was built in 1973 and is the tallest building in the western hemisphere at 1,450 feet and 110 stories high. 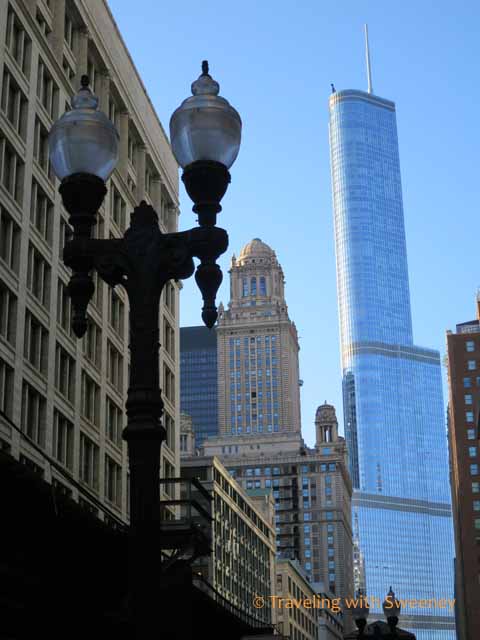 I think that the design of the new Trump International Hotel and Tower (completed in 2009) complements the old Jewelers Building at 35 East Wacker Drive seen in this photo to its left. 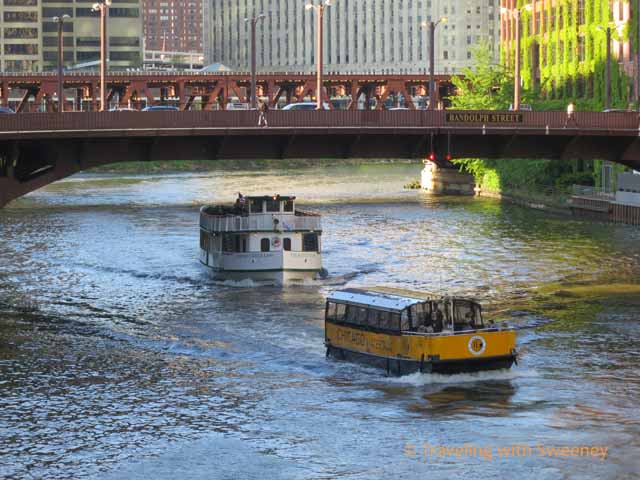 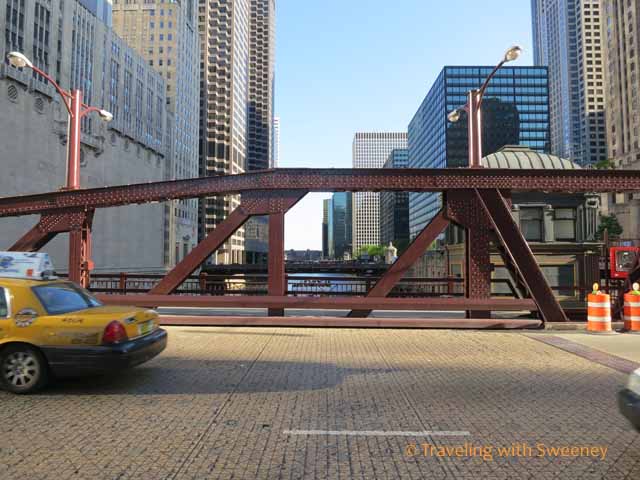 One of the many historic bridges over the Chicago River, the West Washington Boulevard Bridge was opened in 1913. When I take the Metra train into the city from the suburbs, I cross the bridge as I head east into the Loop (Chicago’s central business district) from the Ogilvie Transporation Center a block away. That’s when I start to feel the excitement of being back in the Windy City. 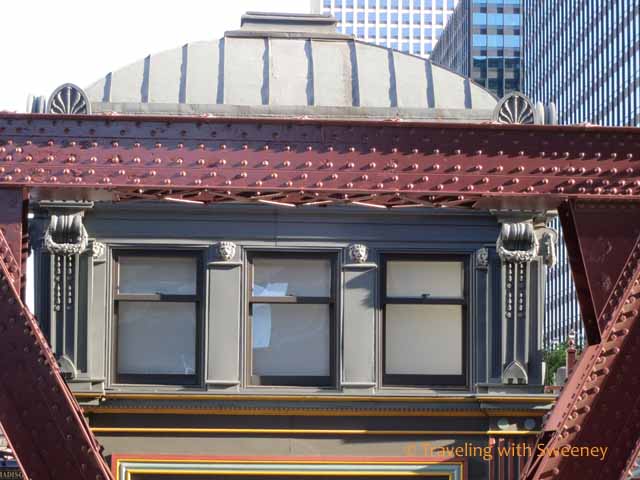 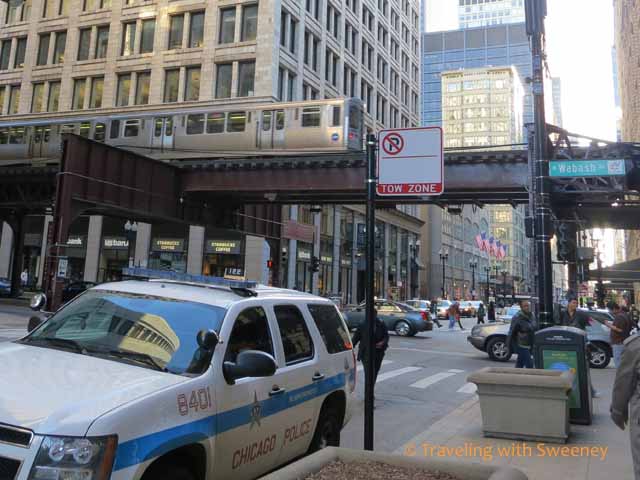 "The L" in the Chicago Loop

The elevated railway (The “L”) has been in operation in the Loop since 1892. One of the classic familiar sounds of Chicago is that of the trains as the pass overhead. 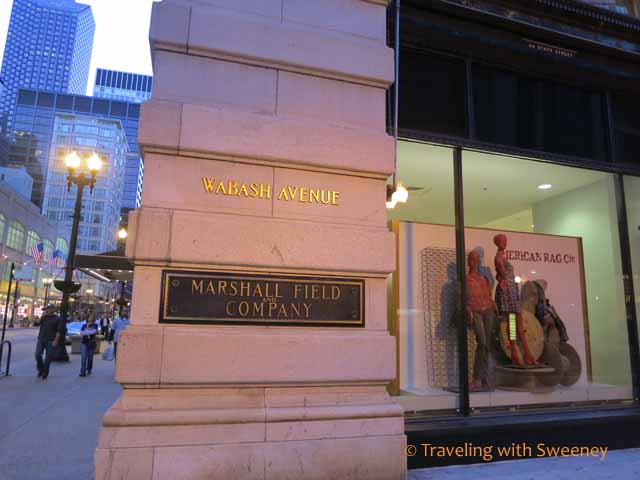 Macy’s on State Street (the corner of State and Wabash is shown here), formerly Marshall Field and Company, is a National Historic Landmark. In 2006, Macy’s bought Marshall Field’s, causing quite a stir among residents whose families had shopped there for generations. Because of the controversy, Macy’s ultimately left the original name plaques on the building. 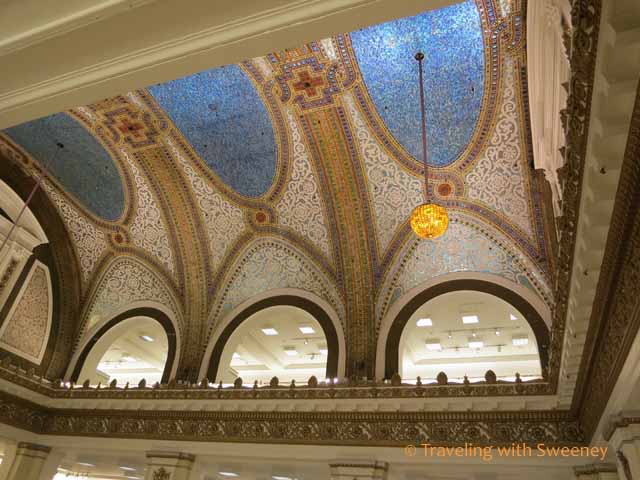 Watch your step while you’re in the store, because you might get distracted by this gorgeous Tiffany glass mosaic ceiling that was installed in 1907. 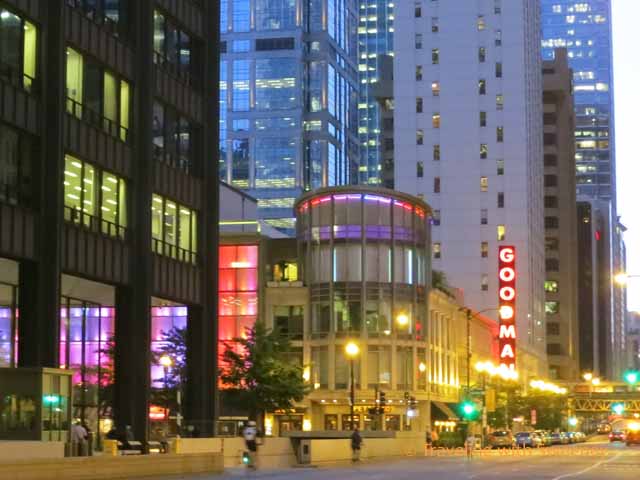 The internationally respected Goodman Theatre is the oldest non-profit theater in Chicago. 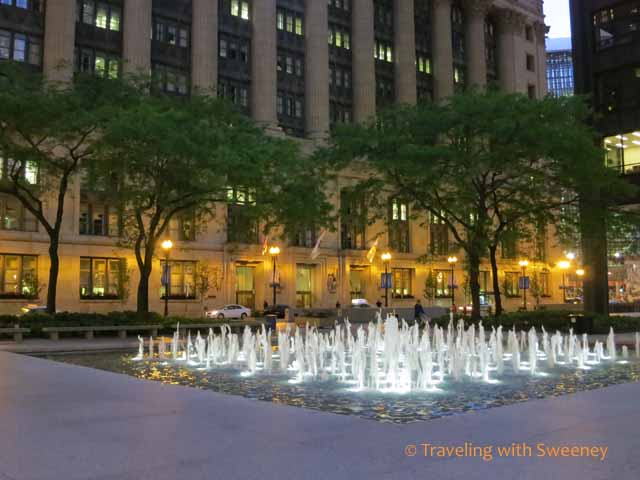 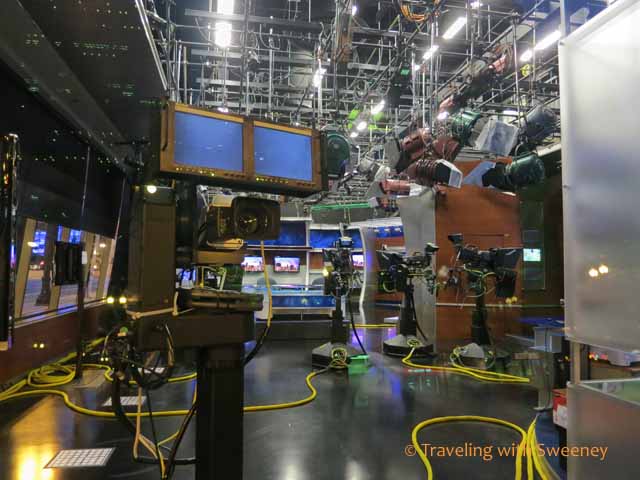 An hour earlier, I stood at this same spot in front of CBS Studios while renowned TV journalist Bill Kurtis was seated at the table chatting off-air with the crew. He smiled and waved. I smiled, waved, and walked on. What was I thinking?

Just One More Slice of Chicago

Mr. TWS had the thin crust pizza with veggies at Lou Malnati’s. What’s your pizza preference?

This is my contribution to this week’s Travel Photo Thursday originated by Nancie at Budget Travelers Sandbox. Be sure to check out other contributions on her website.

I’m also linking up to the Friday Daydreamin’ series at RWeThereYetMom?‘s website. Take a look at the photos there, too.

63 thoughts on “Travel Photo Thursday: A Slice of Chicago”