As someone who is proud to call Chicago my birthplace and former home for many years, I’ve always known that the city is one of the world’s finest cultural capitals. But as many times as I’ve passed by the old Chicago Public Library building, I never walked through the doors of what is now the Chicago Cultural Center, an impressive venue for performing arts, lectures, art exhibitions and special events. The Beaux Arts building, constructed between 1893 and 1897, is a grand work inspired by the World’s Columbian Exposition of 1893 held in Chicago. 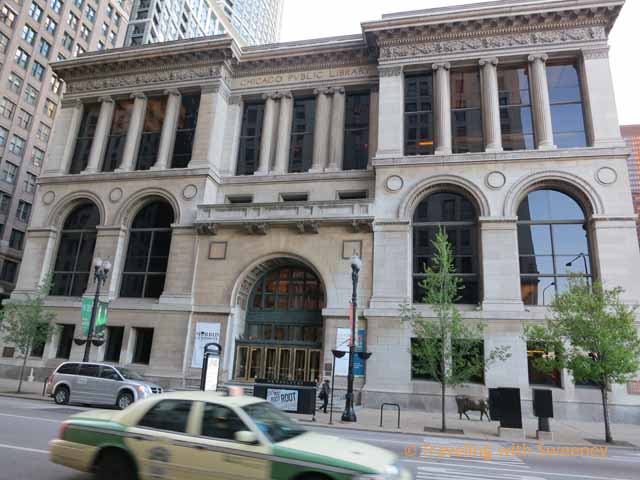 What’s Up at the Chicago Cultural Center

Yesterday, my curiosity got the better of me; perhaps prompted by the intriguing sign about a current free exhibition, “Morbid Curiosity: The Richard Harris Collection”. The death-themed exhibit consists of over 500 eclectic works of art and cultural artifacts spanning six thousand years from the collection of Chicago resident, Richard Harris. I found the exhibition to be very creative, thought-provoking and even educational, particularly the sections exploring cultural traditions, the inevitability of death and and horrors of war. 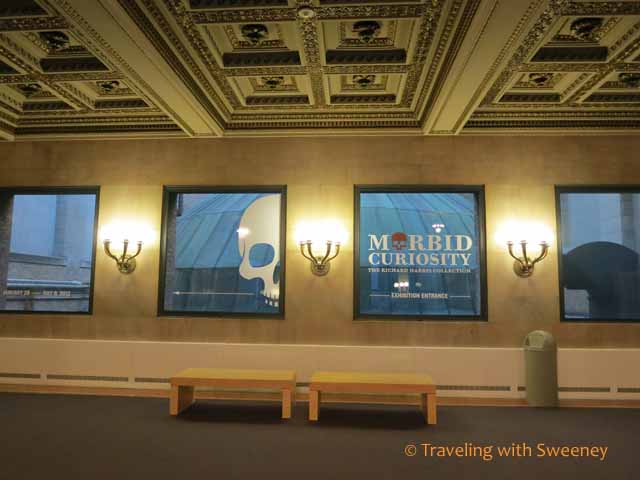 Sadly, just as I attempted to take my first photo, I was stopped by a security guard and told that photography was not allowed in the gallery.

However, I had plenty of photo opportunities in the rest of the building. I went a little crazy taking shots from various angles and perspectives of the majestic staircase and intricately-designed ceilings, flooring, and walls. 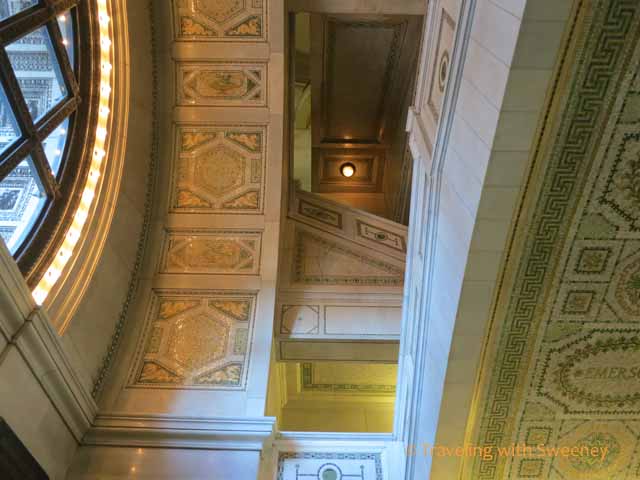 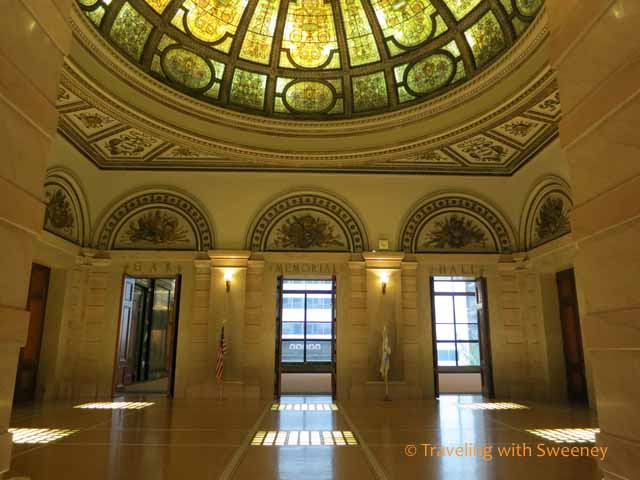 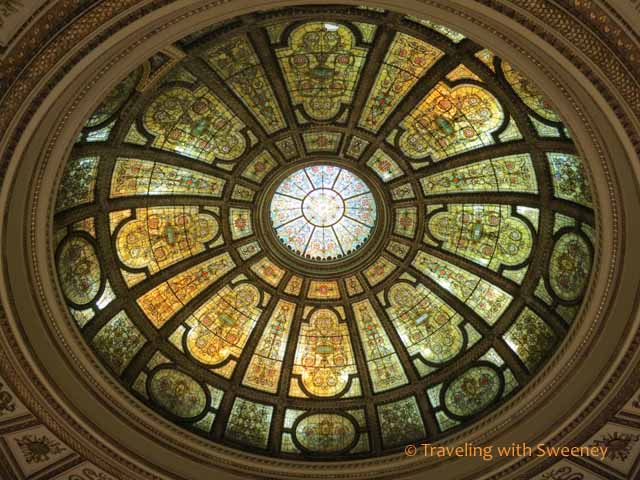 The stained glass dome in the G.A.R (Grand Army of the Republic) Memorial hall is 40 feet in diameter was originally a skylight, but is now enclosed and backlit. Somehow I missed a second magnificent dome located in the Chicago Cultural Center’s Preston Bradley Hall. It is 38-foot Tiffany glass dome that is said to be the largest Tiffany dome in the world. Now I’m curious to see that on my next trip! 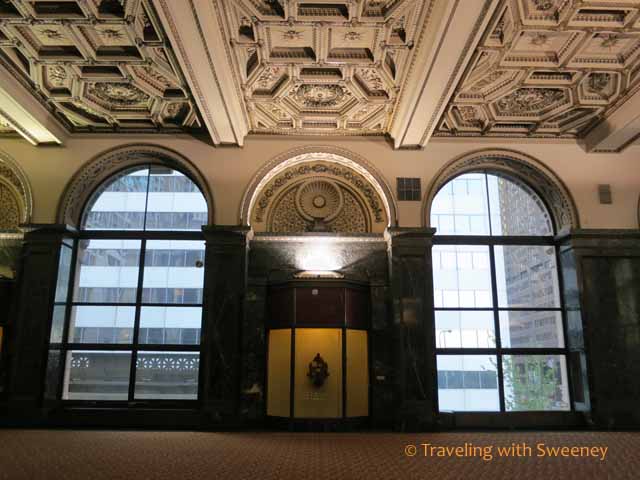 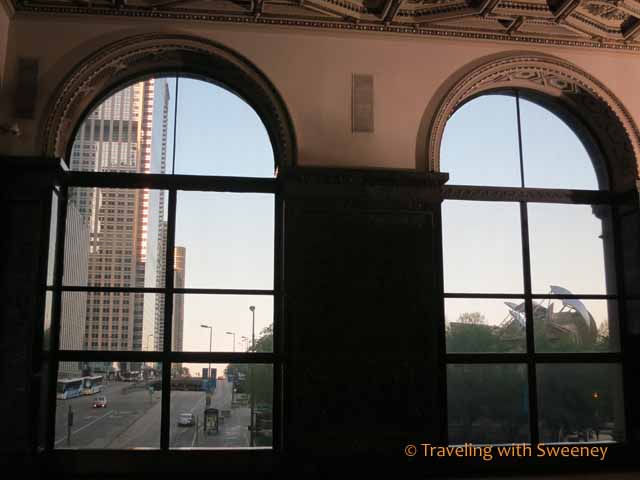 These windows in GAR Memorial Hall look out onto Randolph Street toward lake Michigan and the Jay Pritzker Pavilion at Millennium Park. 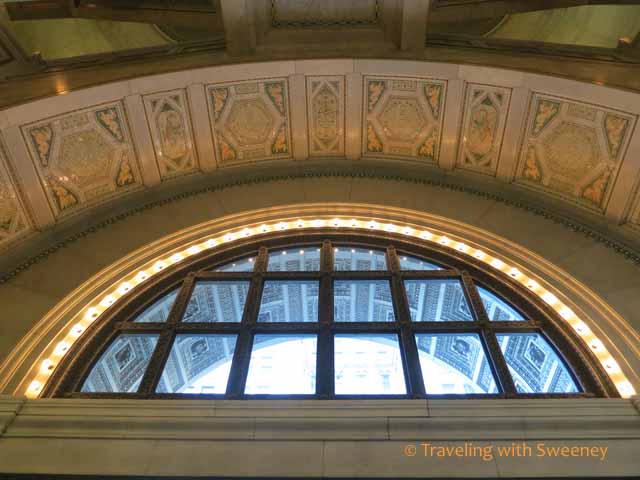 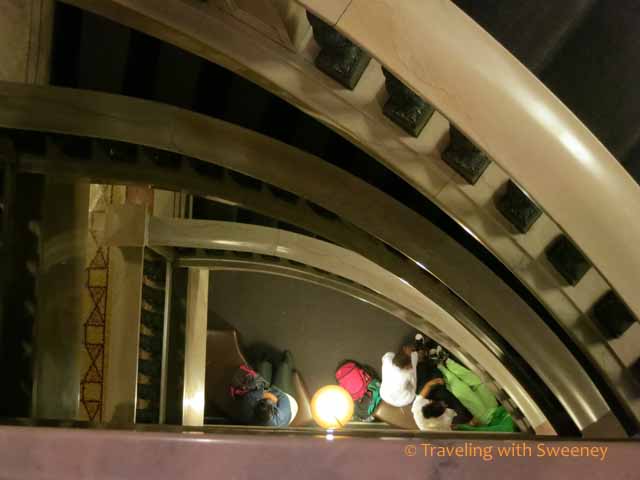 Staircase at Chicago Cultural Center: Looking down at people below

The Chicago Cultural Center was established in 1991 as the first municipal cultural venue in the United States to offer free events, performances and exhibitions for the public. It’s located at 78 E. Washington Street, on the corner of Michigan Avenue.

This is my contribution to this week’s Travel Photo Thursday originated and hosted by Nancie at Budget Travelers Sandbox. Be sure to check out other contributions on her website.

42 thoughts on “Culture Curious in Chicago”