Thoughts of romantic Vienna bring to mind quiet walks along narrow streets with light snow falling, cozy tête-à-têtes over rich chocolate cake and espresso, a ballroom with formally dressed couples dancing a waltz, and the sound of vintage trams passing by. Vienna has always evoked romance for me and since Mr. TWS would be celebrating his birthday during our December trip to Europe, Vienna also seemed like the perfect city for my romantic husband. So I researched our travel options to include the capital city of Austria in our European itinerary. 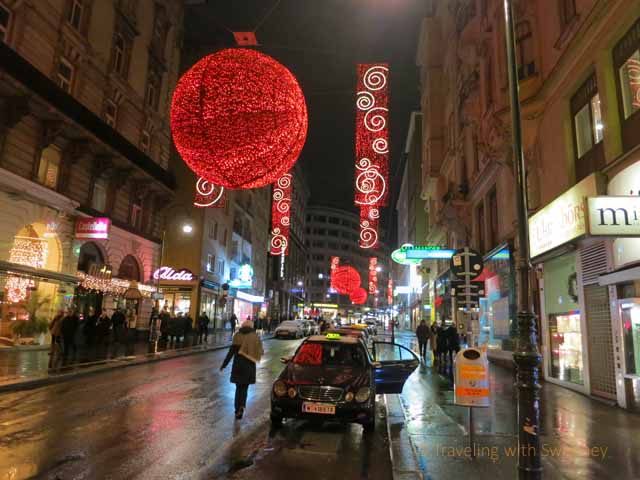 We arrived in Vienna by train from Salzburg. After checking into our hotel, we walked to nearby Rotenturmstrasse to find a restaurant. We had already seen many Christmas lights on our way from the railway station and now this giant red ball and other decorations above the glassy wet street evoked a romantic mood on this late Sunday evening. 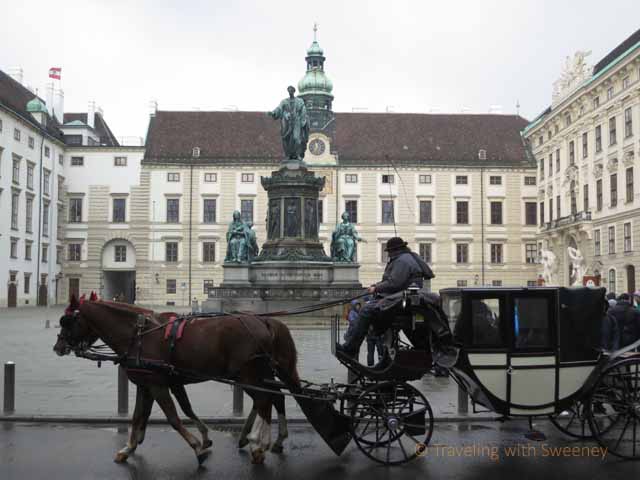 Carriage in the Courtyard of Hofburg Palace, Vienna

We’ve been traveling on Mr. TWS’s birthday for the past several years —Paris, Prague, London, and now Vienna. He thought taking a carriage ride might be a nice romantic touch on his birthday. With blankets across our laps inside the carriage, we snuggled as we rode on narrow cobblestone streets past historic buildings of Romanesque and Baroque architecture. Our driver tapped the window to direct our attention to Gösser Bierklinik, the oldest still-operating restaurant in Vienna. We decided to return there later for lunch.

Since 1683, Gösser Bierklinik has been operating as a restaurant and the building dates back to at least 1406 according to records that have been found. There’s something about being in such a charming old place that creates a warm romantic ambiance. On the recommendation of the waiter, but against his better judgement, Mr. TWS ordered the carp which was among the menu’s local specialties. Although he was a little disappointed in his choice, I thoroughly enjoyed a hearty dish of lentils with bacon, sausage and dumplings. 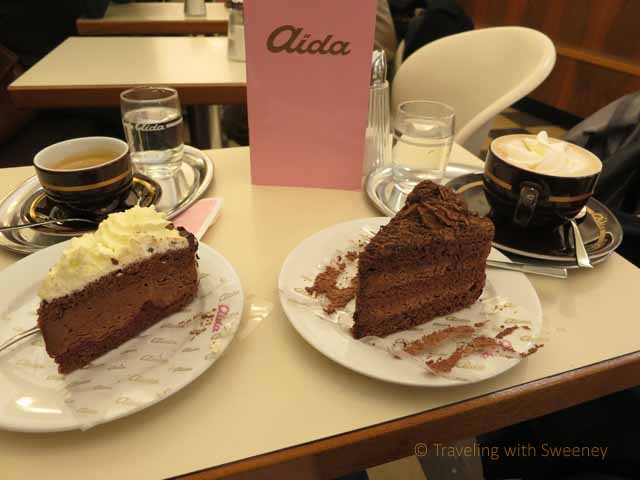 What says romance more than espresso and chocolate cake (particularly with someone you love)? We became accustomed to indulging in tasty desserts like this in Viennese cafés such as Aida while chatting about our day and where to go next. The breaks also provided time to warm up after hours walking in the cold December air. 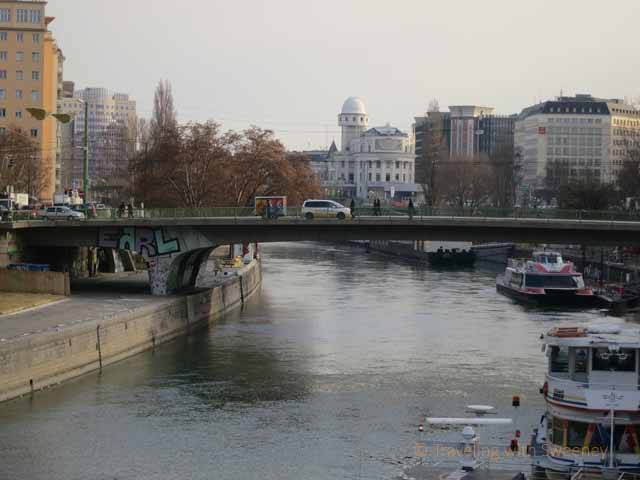 Although we weren’t able to include a visit to the Danube River (since the most scenic locations were well outside the city) on this trip, we did take a stroll along the Danube Canal that runs through the city. We were hoping for a romantic walk much like one would take on the Seine in Paris, but it wasn’t quite the same. 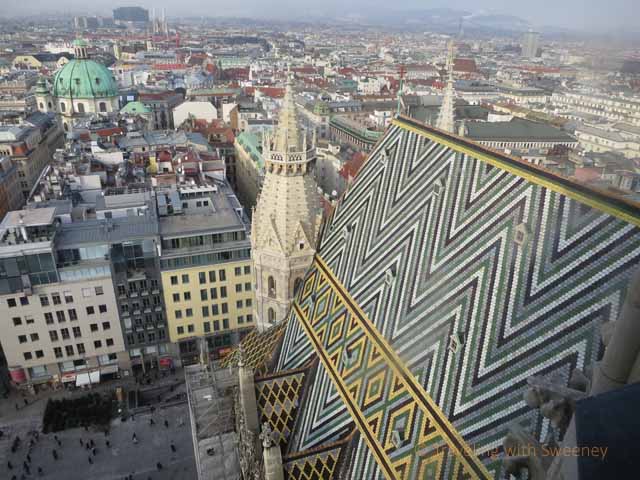 Romantic Vienna from the Tower of St. Stephan’s Cathedral

The Gothic St. Stephan’s Cathedral (Stephansdom) affords beautiful views of romantic Vienna from the tower. The long walk up the tower on a narrow spiral staircase takes you to a gift shop with windows overlooking the distinctive patterned tiles of the cathedral’s roof as well as panoramic views of the old city and beyond. 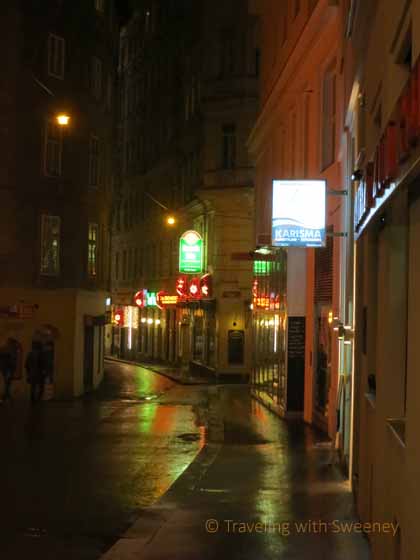 A Quiet Street in Old Vienna

Pavement wet from the snow reflected the colorful lights from old buildings on this quiet street and like many of the streets in Old Vienna, it was perfect for a romantic walk. 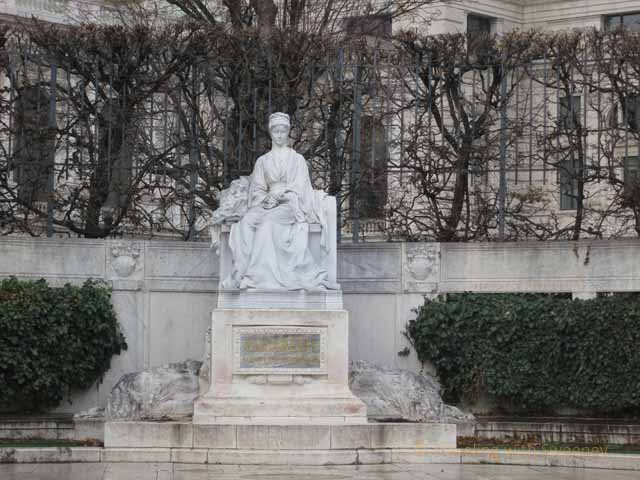 We found Empress Elizabeth (nicknamed “Sisi” from youth) to be a very romantic person in Austrian history (and Bavarian, Hungarian, et al).  In part, it was because she was beautiful. Her beauty has persisted through history somewhat due to the fact that she never posed for pictures after age 32 so that her image would always be youthful. Emperor Franz Joseph I of Austria became instantly infatuated with Sisi when he met her and her sister, Helene. (Franz Joseph’s domineering mother had actually chosen Helene to be his bride.) His love at first sight for Sisi, at what was supposed to be Franz Joseph’s formal proposal to her sister, adds to the romanticism surrounding Sisi. In defiance, he vowed not to marry if he could not marry Sisi.

Sisi devoted the last 25 years of her life to travel — what can be more romantic than that? Tragically, her premature death at the hand of an assassin heightened the romance around her. The romance was also enhanced by many works about her life including an operetta, a play, a musical, ballets, and several films, among them the trilogy of romantic films about her life directed by Ernst Marischka in the 1950s. 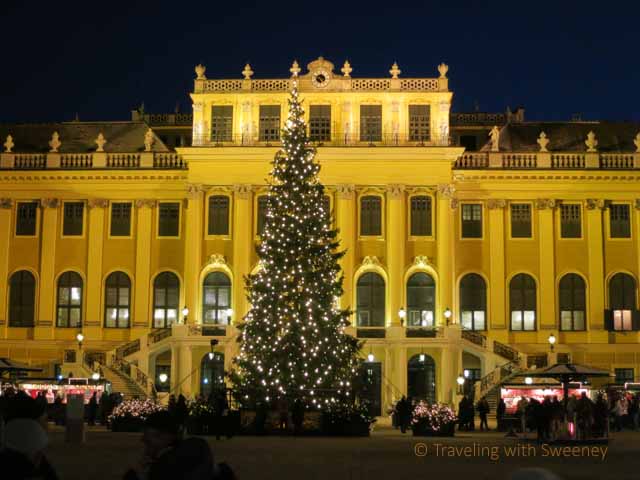 The Romance of Schonbrunn Palace at Christmas

The romantic Schönbrunn Palace, beautiful inside and outside, seemed even more so with the lights of the Christmas market all around and the golden light on the building. It was our final night in Vienna and being here was a perfect romantic ending to the trip.

At the Rathaus Christmas market love was in the air, too. These pretty heart-shaped lights were among the many diverse and colorful light displays at the market. 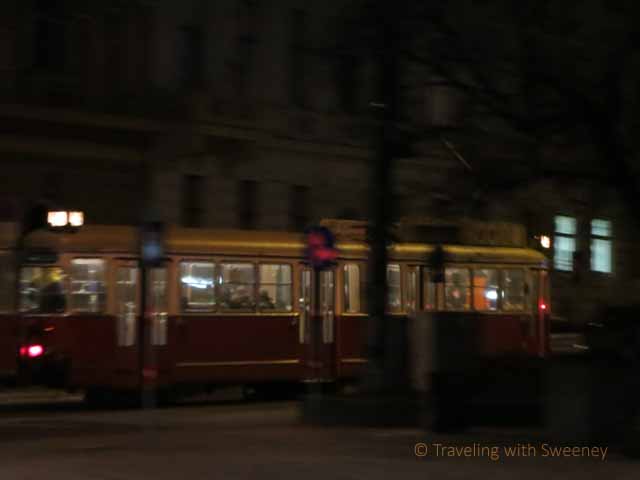 I think the vintage streetcars that circle the ring surrounding Old Vienna are romantic icons. I wish that we had a chance to ride one — or at least capture a better photo.

View of Vienna from Belvedere Palace

Belvedere Palace is a beautiful historical structure, but the romantic treasure inside that made this a must-see for us was Austrian artist Gustav Klimt’s “The Kiss” in the Österreichische Galerie (Austrian Gallery). “The Kiss” has significance for us because for Valentine’s Day many years ago, I bought a jigsaw puzzle of the painting for Mr. TWS. We loved working on it together and got to know the picture well while piecing together all the tiny, shiny pieces. As we rushed to the gallery before closing time, we planned on asking someone to take our photo in front of the painting while in a similar embrace (a little cheesy, but romantic). Alas, photos were not allowed! 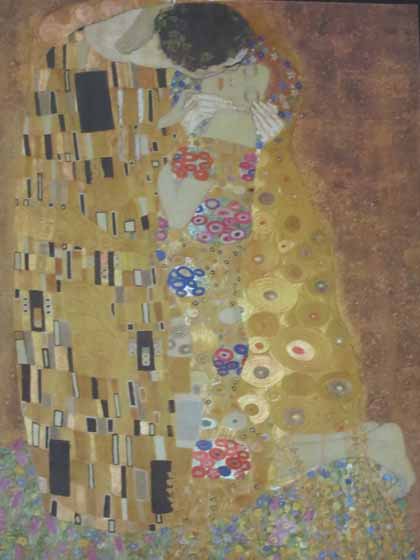 Photo of “The Kiss” (Gustav Klimt) on Our Puzzle Box

A pair of lovers in a deep kiss had been a recurring theme in Klimt’s art, and this, his most famous painting, was the end of what is known as the “Golden Phase” of his career.

There are several theories about the inspiration for the painting and attempts to identify the woman in the work. But I believe that it was his life in romantic Vienna that clearly influenced his works and inspired this wonderful painting.

From romantic Vienna, sealed with a kiss.