My three days in Paris

Upon entering 17 Rue St Jacques for three days in Paris last week, I knew I’d have a hard time leaving this 17th century apartment in the Latin Quarter of Paris. It exuded much of the Parisian ambiance that I’d always imagined. From the entrance hallway, we walked up a short flight of stairs to the living area where two large windows provided a perfect view of the amazing Gothic church, Saint-Séverin, directly across the street. It was our first time staying in an apartment instead of a Paris hotel and it is a wonderful option. 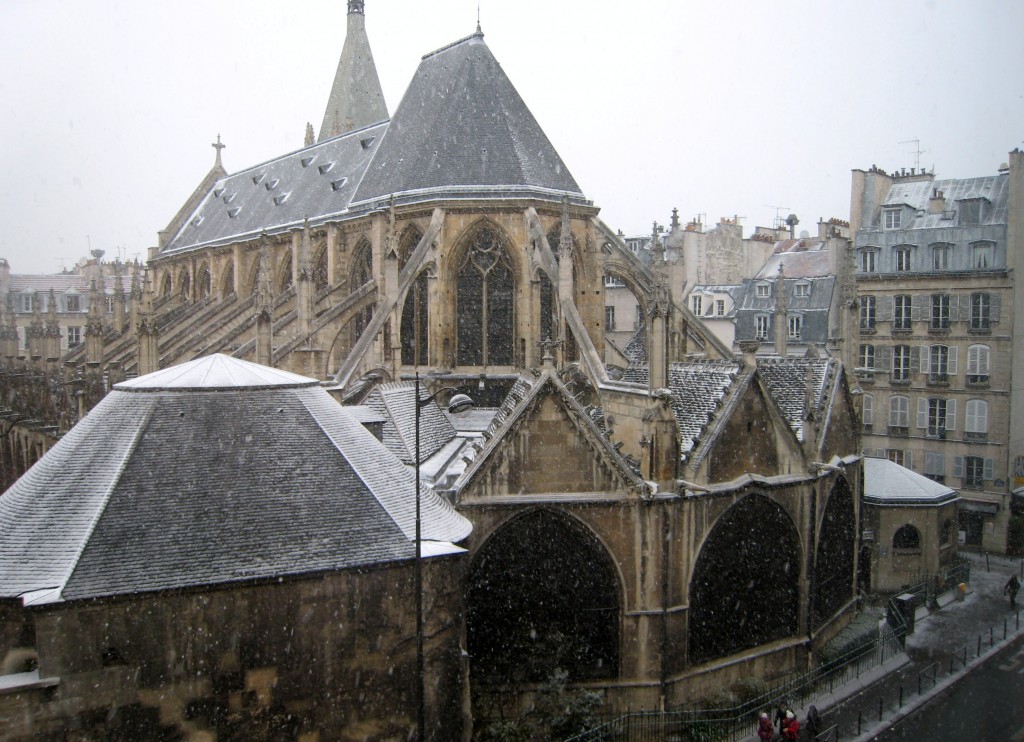 View of Saint-Séverin from our Rue St. Jacques apartment

The Latin Quarter is a popular area for tourists because of its proximity to many Paris sites, but maintains a character befitting this ancient part of the city. With the Sorbonne nearby, there is also a young, vibrant feel to the area with cafes, clubs and shops. We decided to start the weekend at Café Le Petit Pont just a few minutes’ walk from the apartment and enjoy a glass of Bordeaux. Although being very touristy, the location is excellent with the western façade of Notre Dame and its Christmas tree with blue lights in view. A stop at Amorino Huchette for chocolate bouchées topped off a walk through the brightly-decorated streets of the Latin Quarter. 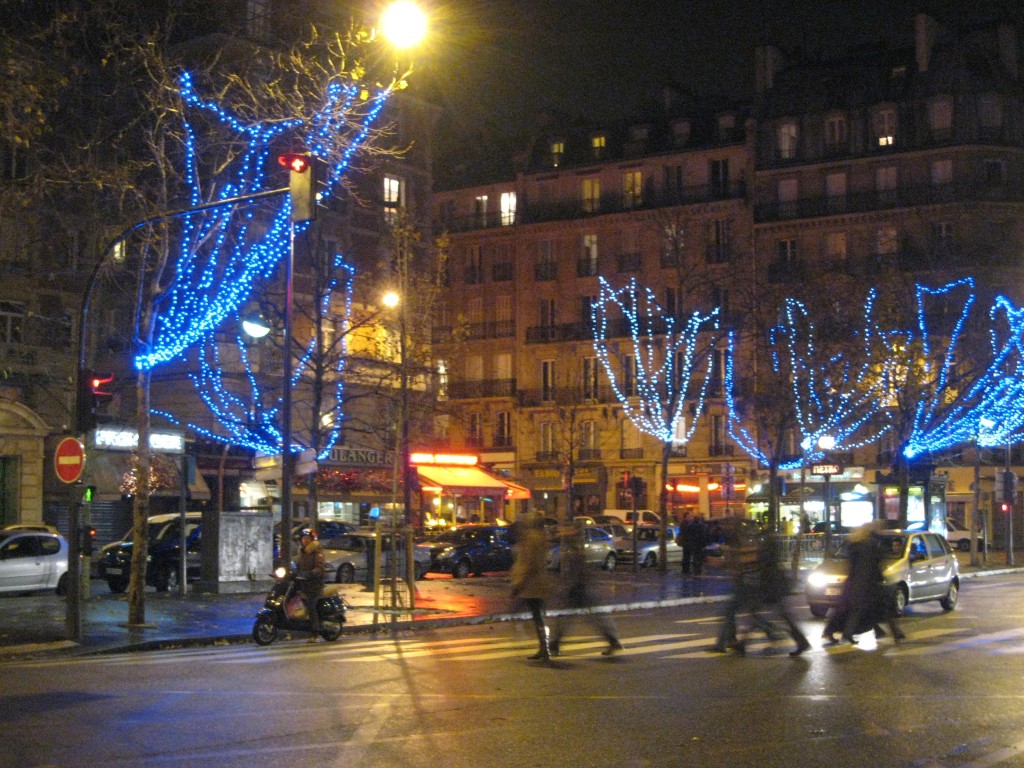 Latin Quarter during the holidays

As we enjoyed breakfast (omelet, café, juice, salad) at L’Authre Bistro on Rue de la Montagne, it started to snow big, fluffy flakes. We then shopped at Place Maubert, where vendors were selling fruit, vegetables, chocolates, flowers, clothing & accessories at the oldest street market in Paris. Back at the apartment, we watched the snowfall as children had a snowball fight in the church courtyard below. 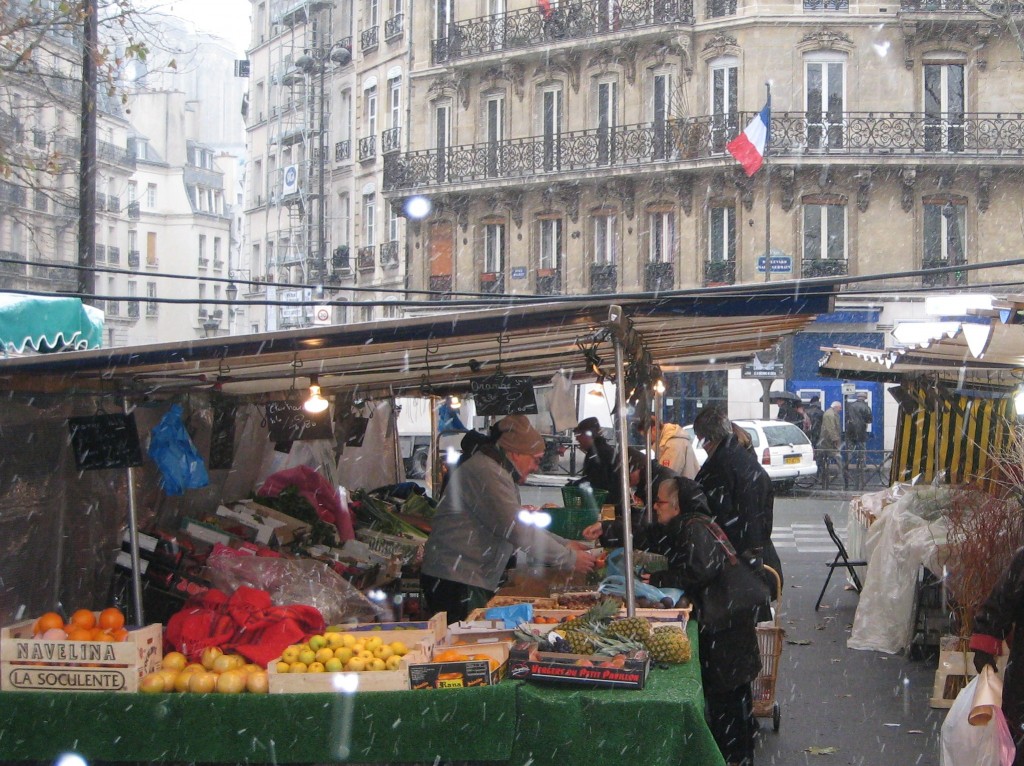 Outside again to enjoy a walk in the snow and see more of the area, we visited the Pantheon, originally built as a church to honor Ste Geneviève, it later became a grand location for the tombs of French notables such as Voltaire, Victor Hugo and Madame Curie. From there, on our way to the Luxembourg Gardens, we watched the Marches des Maladies Rare (a march in support of finding cures for rare diseases) in progress from our seats at Café le Luxembourg.

After dark, we wandered through the culture-rich St-Germain-des-Prés district’s residential and shopping areas and by the Théâtre National de l’Odéon. Close to the apartment, we crossed the Seine to Notre Dame. Although too late to be able to climb to the observation level, we entered the cathedral as mass was in progress at the main altar, enjoying the choir while being taken in by the architecture. 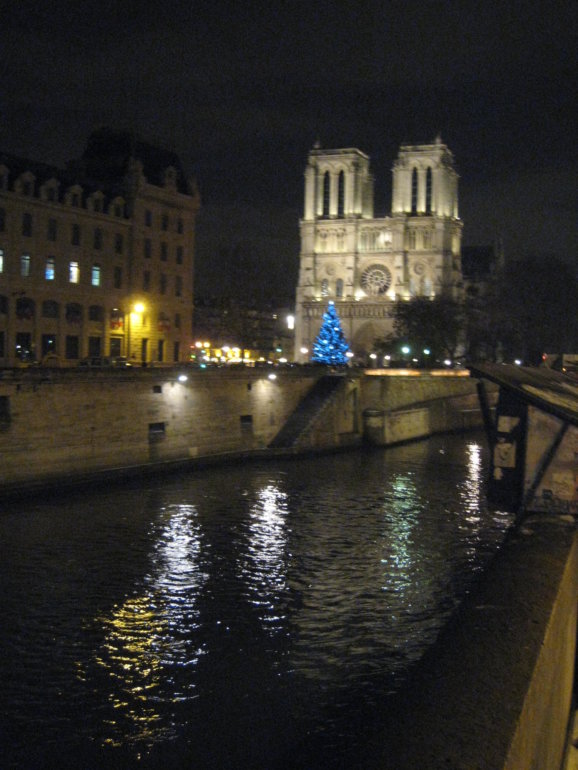 Notre Dame Cathedral across the Seine

A highlight of the weekend was a walking tour of Montmartre with Michael Schürmann, the author of Paris Movie Walks. Along with the beauty of Sacré-Coeur Basilica, panoramic views of Paris, the character of shops and cafés that line the winding streets, there is the added bonus of seeing well-known film settings and former homes and studios of artists such as Picasso and Dali. At the Places des Abbesses is a Christmas market, which was bustling with families riding the carousel and shopping for toys and ornaments while enjoying holiday food and drinks. 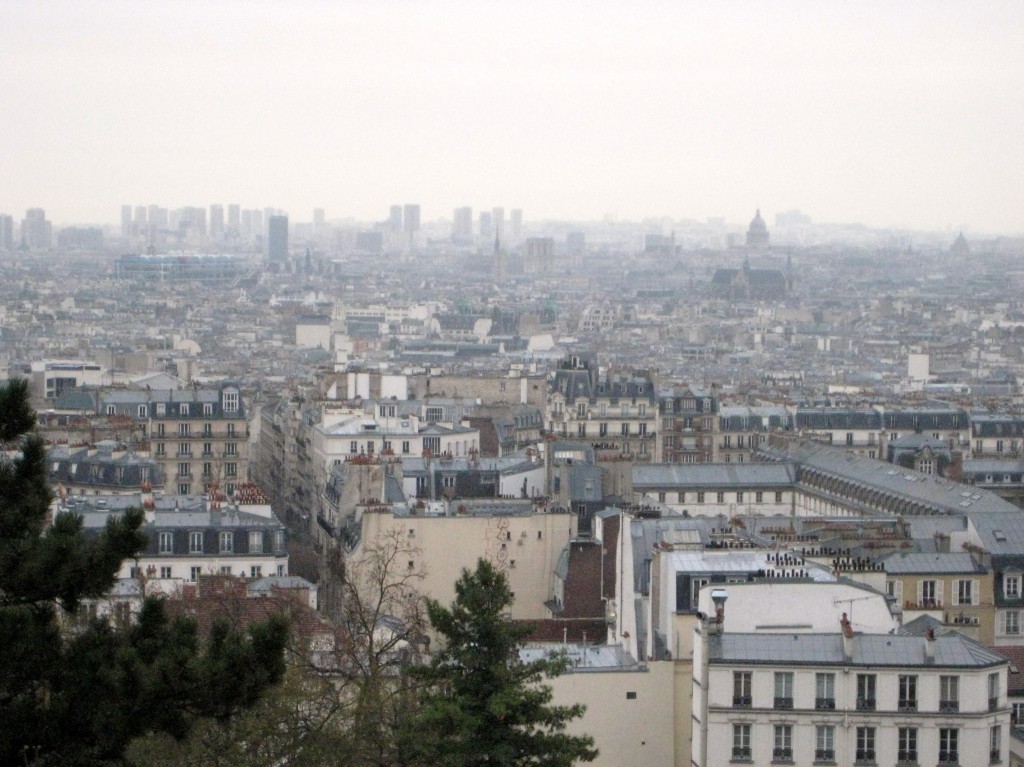 Over the rooftops of Montmartre

We took the Metro from the Abbesses station to the Place de la Concorde. 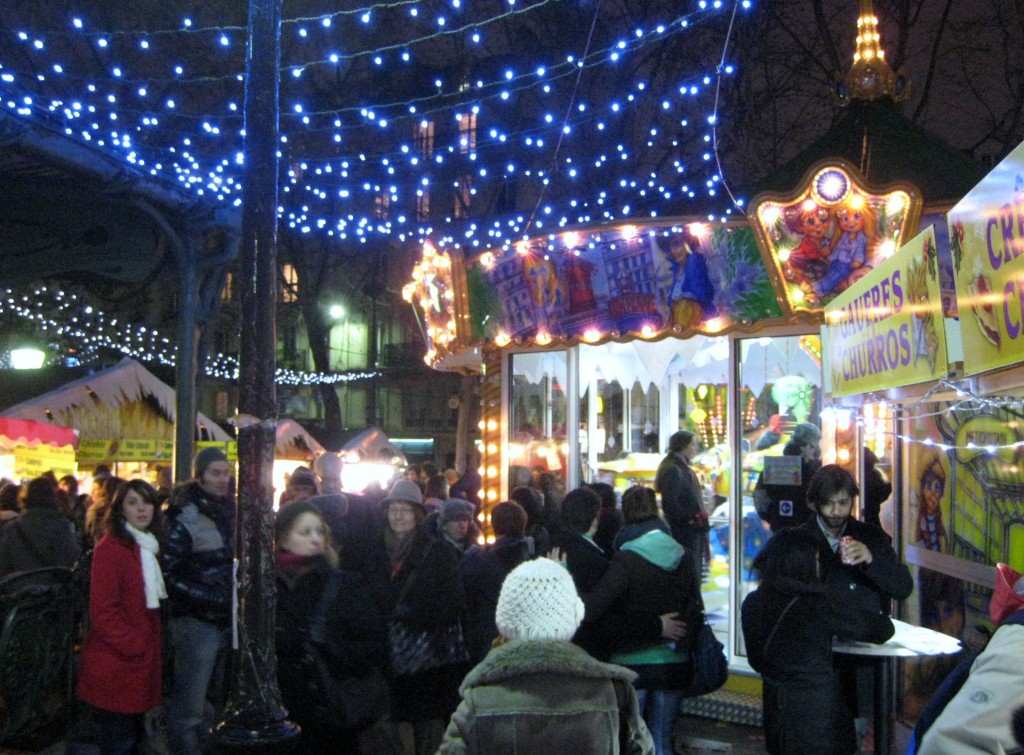 Emerging the Metro station on this beautiful night near La Grand Roue (large Ferris Wheel) at the end of the Champs-Elysées. This is also the location of Paris’s largest Christmas market and traditional stalls lined both sides of the avenue to Rond-Point des Champs-Elysées. After a light meal at the self-described “chic et cosy” Le Berkeley on Avenue Matignon, we headed back to our Latin Quarter apartment via the Tuileries, the Louvre and a walk along the Seine. 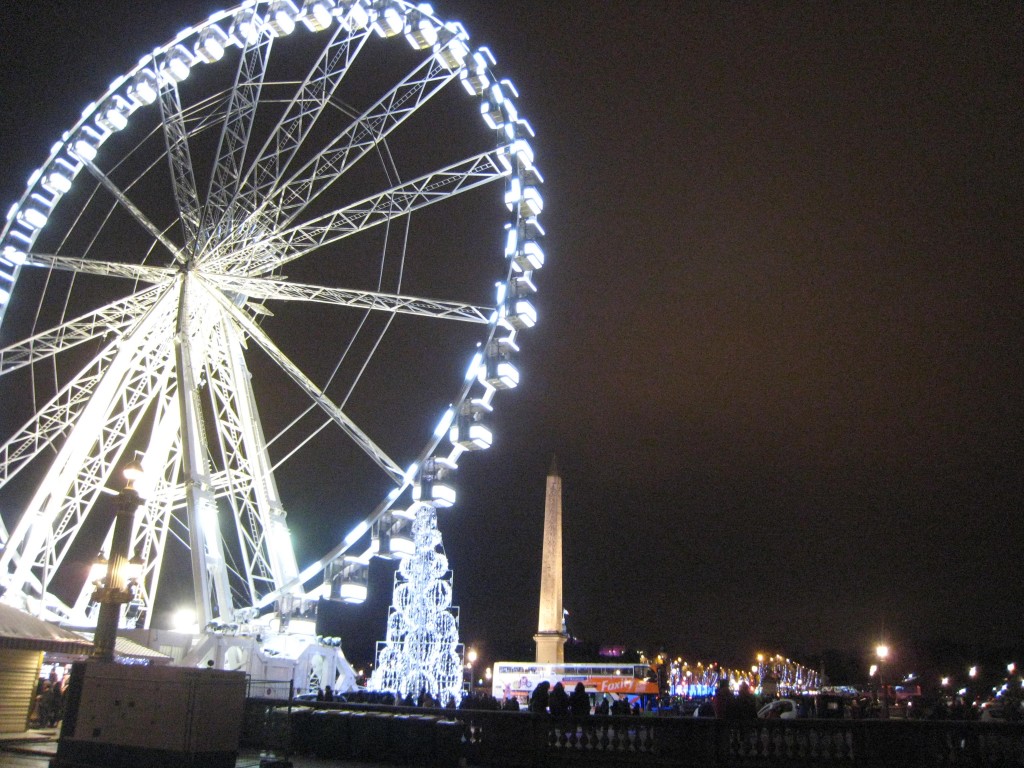 Up before dawn on Monday, Rue St Jacques was quiet with only a few cars making their way on the wet street below. It was time to leave, but the weekend had left a mark and the desire to return to Paris very soon. 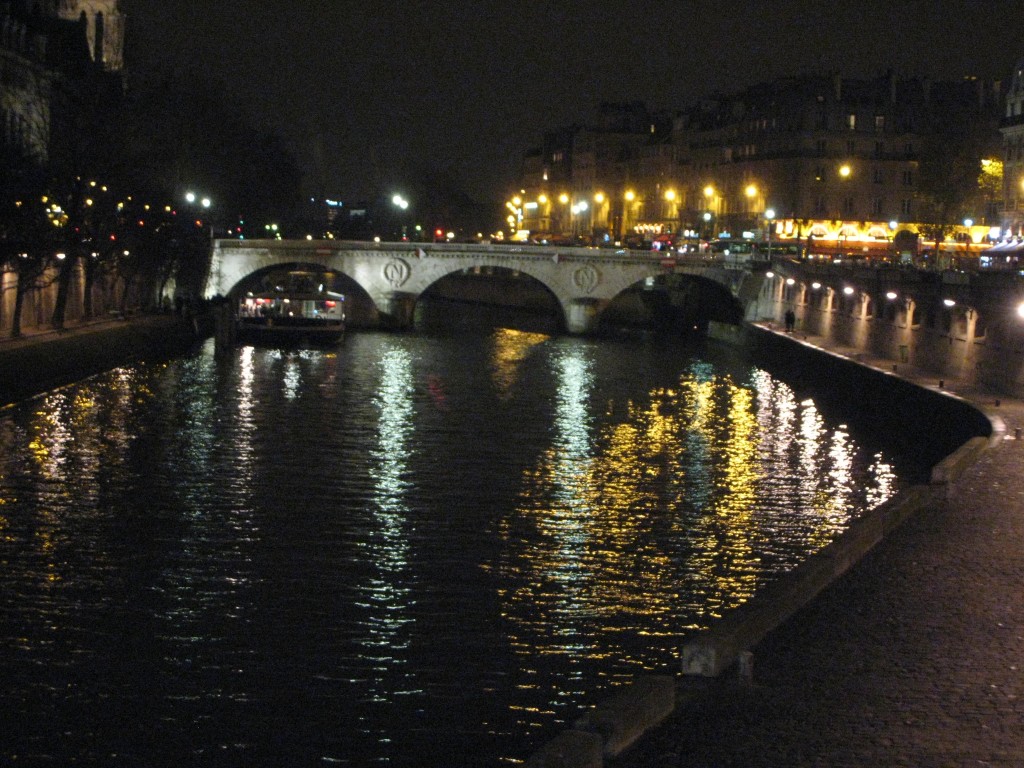 The Seine at night

40 thoughts on “Three Days in Paris: Rue with a View”