As a little girl, I had an Annie Oakley cowgirl outfit that I wore around the house and out to play with my neighborhood friends. Mr. TWS had a cowboy outfit as a boy as did many children of our generation. I was enthralled by the American West from the many Western television programs and movies of the time and the road trips across the western states that I was fortunate to take with my family. So I looked forward to a visit to Western Spirit: Scottsdale’s Museum of the West, a Smithsonian affiliate museum, expecting a step back in time with exhibits of Old West memorabilia and antiques.

There was all of that, but so much more! It’s now clear to me why Western Spirit is highly recognized and includes among its accolades its designation as the 2016 “Best Western Museum” in the country by True West magazine. The extent and quality of the exhibits, including wonderfully surprising collections of fine art and rare artifacts was greater than I expected.  It seems fitting that the museum is located in a city nicknamed in 1947 “The West’s Most Western Town” even though Scottsdale’s lush golf courses and high-end shops, dining, and real estate have replaced much of the Old West ambiance of times past. 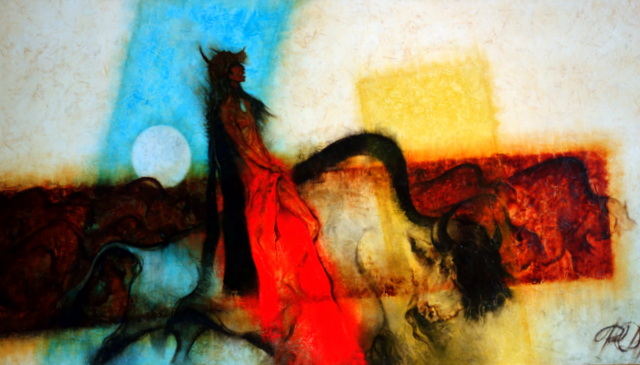 “Spirit of the Buffalo Medicine” by Paul Dyck

A first-class museum and gallery

Western Spirit is a first-class museum celebrating the art, culture and history of the American West in its galleries in the 43,000-square-foot two-story main building. From antique artifacts to fine art, its exhibits are extremely well done, presenting detailed information, compelling art and visuals, interactive displays, and more.

Western Spirit’s exhibits, permanent and changing, capture the essence of the American West from the perspectives of many different people — mountain men, early explorers, Native peoples, and pioneers. Here are some of the highlights from our visit. 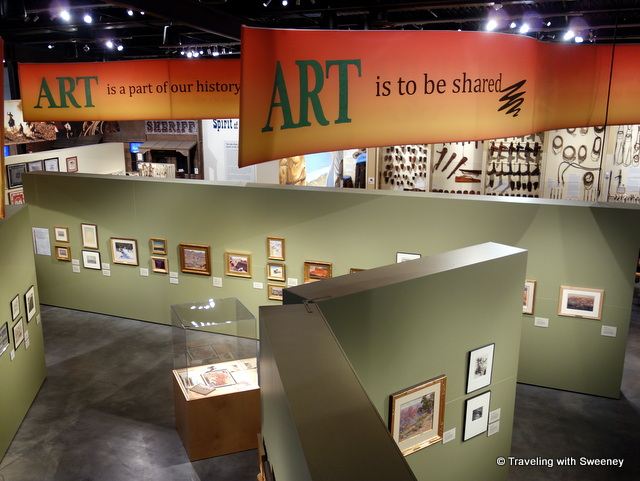 After a nice chat at the ticket counter with cheerful and helpful museum staff, we started our tour in the 135-seat Virginia G. Piper Charitable Trust Theater/Auditorium just beyond the lobby with a 10-minute film called “Spirit Is”. The film presents a story of the American West, one that sets the tone for the museum experience and conveys a message of “spirit matters” and the importance of having respect for the land, people, the journey of human beings, and all things.

The museum has a wonderful collection of 20 bronze statues by John Coleman, one of the most renowned artists of the American West, in the “Of Spirit and Flame” exhibition I enjoyed them as works of art but also appreciated the detail of the Native American portrayals and the stories they told. 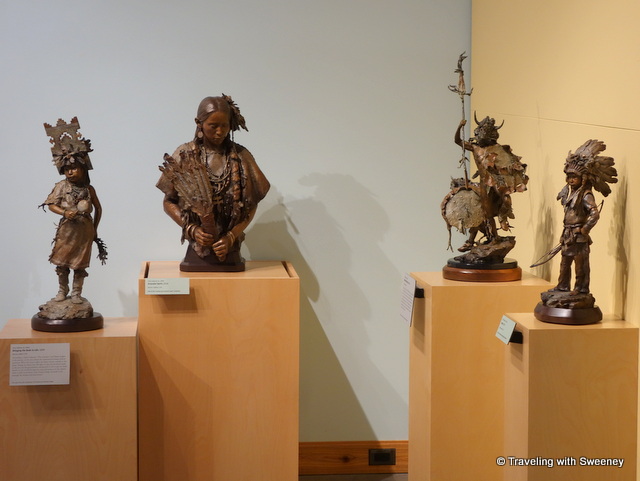 I was pleased to learn about early Scottsdale resident Marjorie Thomas (1885 – 1978), a true pioneer in Western art who was an eye-witness to many events in Arizona history. About 40 of her paintings of desert landscapes, Native peoples, and scenes of daily life on the ranch are on exhibit depicting early Western history.

The Rennard Strickland Collection of Western Film History exhibition (running through September 30, 2018) has over 100 Western film posters and lobby cards from the 1890s to mid-1980s. It was a fun exhibit for both of us, but particularly for film buff Mr. TWS, who has probably seen most of these movies — many more than once! 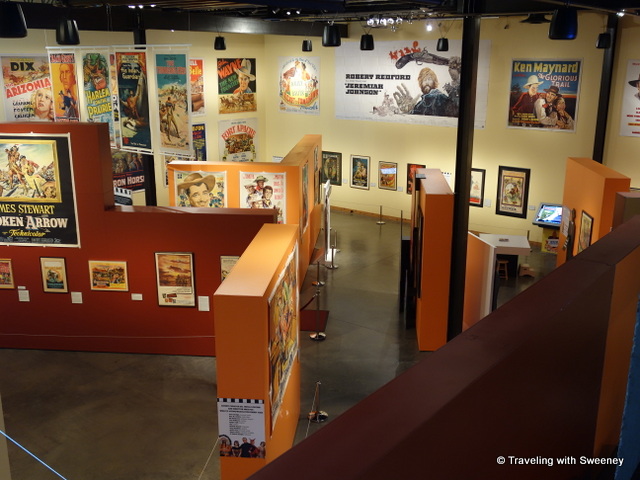 The Abe Hays Family Spirit of the West Collection has an impressive and diverse number of antiques and objects as you’ve seen them in the movies — saddles, riding gear, saloon and gambling artifacts, items from Wild West shows and rodeos, and much more. It’s a fun look at the rough, rugged, and exciting Old West times. 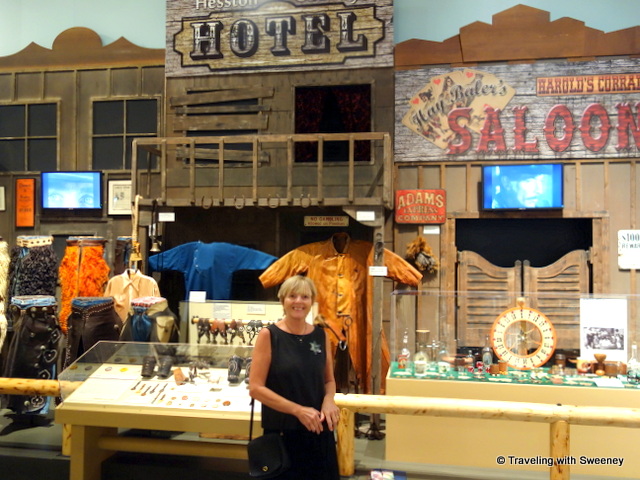 Did you know that there was fine wine back at the O.K. Corral in Tombstone, Arizona? Kelly’s Wine House there in the Old West served 26 wines imported from Europe. This and other interesting bits of trivia and unexpected information are found in a series of “A True West Moment” displays. This was part of the “Spirit of the West” exhibition mentioned above. The stories were intriguing, often humorous, and left us wanting to learn more about each surprising tale. 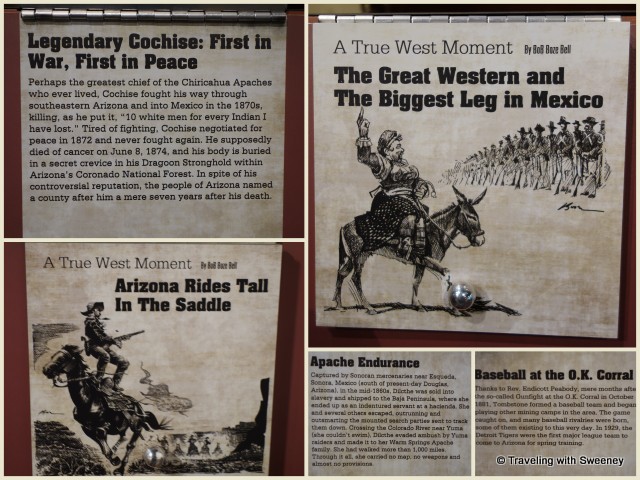 In the “Courage and Crossroads: A Visual Journey through the Early American West” exhibition, there are over 100 paintings and sculptures capturing the American West of the 19th and early 20th centuries by famous artists such as Frederic Remington and Thomas Moran. There are also vintage photographs, Native American textiles, Kit Carson artifacts, and more representations of the early West. A must-see item in this gallery is a pipe tomahawk that belonged to Meriwether Lewis of the Lewis and Clark Expedition (shown above). 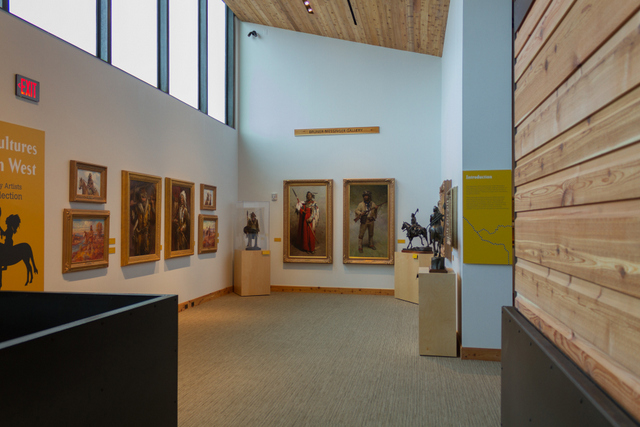 In the “Confluence of Cultures in the American West” exhibition there are intriguing portrayals of mountain men and Native Americans, including themes of the friendships and disputes between them. 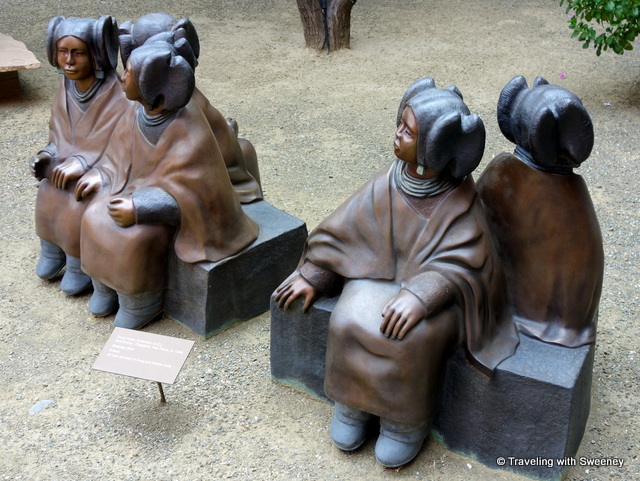 The museum includes a pleasant sculpture courtyard with works by several prominent Native American artists, including Doug Hyde whose work I’ve also seen at the Heard Museum in Phoenix. The courtyard has a “weeping wall” (shown below) that collects rainwater from the roof and condensation from the air conditioning system. That water is transported to the planters and desert landscape on the property. 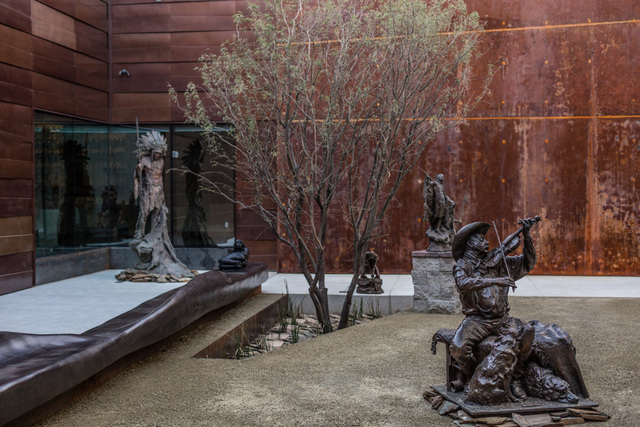 I appreciate appealing and innovative architecture and find that with many museums and galleries the building is part of the attraction. So is the case with Western Spirit. The building has many artistic aspects and there was an easy flow between the galleries and exhibit spaces. The museum has been certified LEED Gold for its environmentally-conscious design and construction (as seen in the “weeping wall” above, for example). While the design is contemporary, it reflects Western concepts and conveys the overall theme of the Western spirit.

Of course, there’s much more, but you must see it for yourself when you visit the Phoenix/Scottsdale area.

Visiting tip: Although you see the highlights in about two hours (as we did), allotting at least 4 hours is a good idea so that you can spend more time exploring the items of most interest to you.

Accessibility tip: There are two push wheelchairs that guests use free-of-charge while touring the museum. Check at the main Visitor Services desk for availability.

Special exhibit tip: If you visit before December 17, 2017, be sure to see over 100 gorgeous and compelling paintings and prints from the 1850s – 1950s of the Grand Canyon in the “Grand Canyon Grandeur” exhibit.

Food and drink tip: There are several restaurants within walking distance of the museum. We can recommend AZ88 for American fare and an artistic ambiance, and Los Olivos for Mexican food and delicious margaritas.

For more information: Western Spirit: Scottsdale’s Museum of the West

Perhaps you recognize this location from trailers