The first time I visited the Heard Museum several years ago was upon the enthusiastic recommendation of my Aunt Vi while visiting her in Phoenix. From the time she was a young girl, Aunt Vi had a fascination with American Indian culture that stemmed from her father’s, my grandfather’s, interest and respect for the culture. Her early memories include a large book that he had that had greatly intrigued her. It was full of photographs and stories about the American Indian people. Many years later, she became familiar with the Heard Museum and its excellent exhibits of American Indian culture and art, and she visited whenever traveled to the area. After moving to Phoenix in the mid-1990s, she quickly made a decision to volunteer at the museum so she could immerse herself in the amazing American Indian art and hand-crafted treasures of the museum while working in the gift shop and meeting visitors from all over the world. 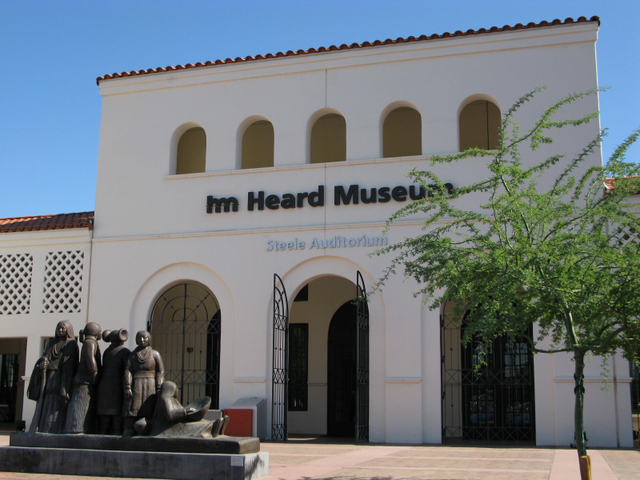 Highlights of the Heard Museum

Recently, I explored the Heard Museum with out-of-town friends and Mr. TWS. Since my first visit, the museum has grown and the exhibits are more extensive.  It is an incredible place to learn about and enjoy American Indian culture, art, and history.

Since its opening in 1929, the Heard Museum has been showcasing unique and diverse collections of American Indian art and artifacts and currently has 40,000 objects in its 12 galleries. In addition to its ongoing collections, the museum also features special events (such as the popular Hoop Dance and Indian Fair and Market), educational programs, and changing exhibits. 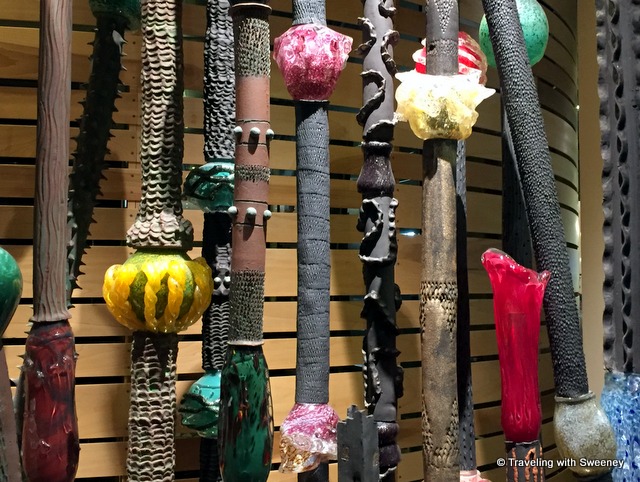 At the entrance to the museum’s signature gallery Home: Native People of the Southwest, is the 30-foot Art Fence, a work of colorful blown glass by Tony Jojola and ceramics by Rosemary Lonewolf in their collaboration named Indigenous Evolution. It is a beautiful and intriguing opening to the treasures in the gallery beyond that showcase the traditions and culture of the Native people of past and present in their Southwest USA home. Displays include a full-sized Navajo hogan, jewelry, pottery, baskets, gorgeous textiles, beadwork, and more cultural objects. 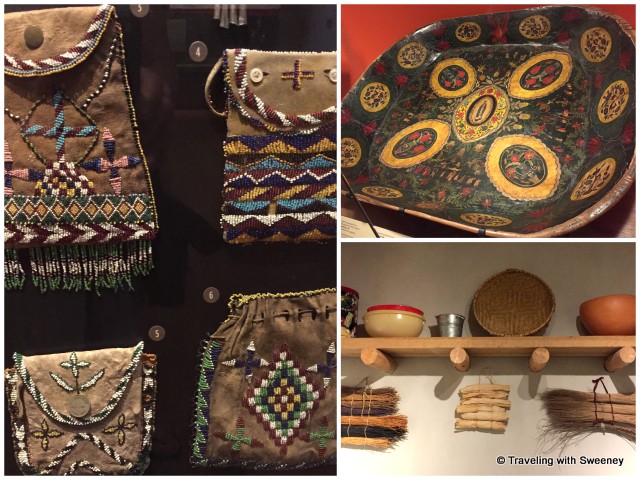 Extraordinary among the displays are over 500 Katsina (the Hopi word for “Kachina”) dolls, the culturally-important carved figures representing Katsina spirit messengers with a wide range of styles and characteristics. The dolls are given to young girls as gifts symbolizing prayers for good health, growth, and fertility.

in the courtyards, at the museum entrance, and throughout other outdoor areas of the museum there are numerous sculptures capturing the perspectives of American Indian artists. I really liked the bronze sculpture below by Doug Hyde, Intertribal Greeting, outside the main entrance to the museum. 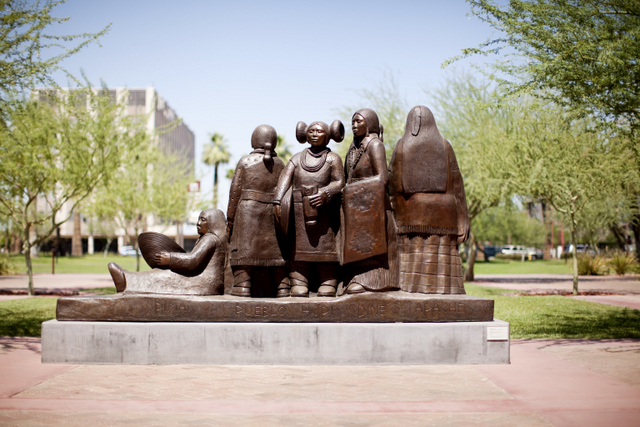 I enjoyed a stroll in the Nichols Sculpture Garden where the stainless steel sculpture shown below by Bob Haozous, Woman in Love, caught my attention. 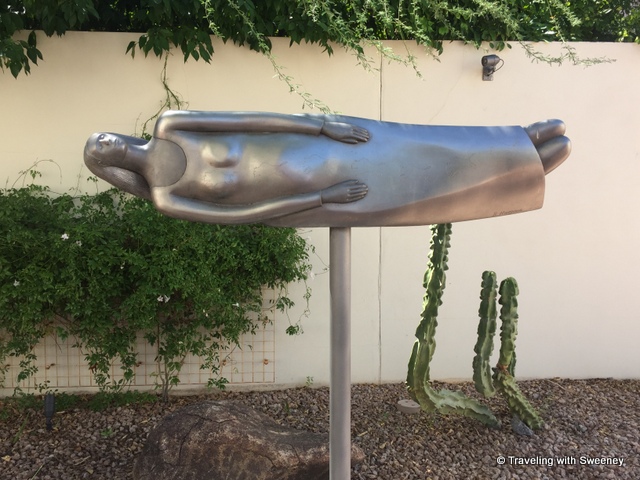 “Woman in Love” by Bob Haozous at the Heard Museum

A very thought-provoking and eye-opening exhibit is Remembering Our Indian School Days: The Boarding School Experience. It presents the stories and memorabilia of four generations of American Indians who were forced by the federal government to attend boarding schools to be assimilated into mainstream society. The words of Chancellor Lipincott of University of Kansas at the dedication of the Haskell school on September 17, 1884 emphasize the philosophy of the United States government of the time:

“When one Indian boy or girl leaves this school with an education, the “Indian Problem” will forever be solved for him and his children.”

For the American Indians it was a sad mandate aimed at destroying their culture.

Further perspectives about the boarding school period and displacement of Native people is found in the bold and disturbing scenes in Fear of a Red Planet, paintings by Steven Yazzie, filling three walls of the of the Edward Jacobson Gallery (upstairs). Yazzie’s Black White Blue Yellow (BWBY), a video and sound installation exploring four sacred mountains of the Diné/Navajo people is downstairs in the Jacobson Gallery through through October 15, 2017. 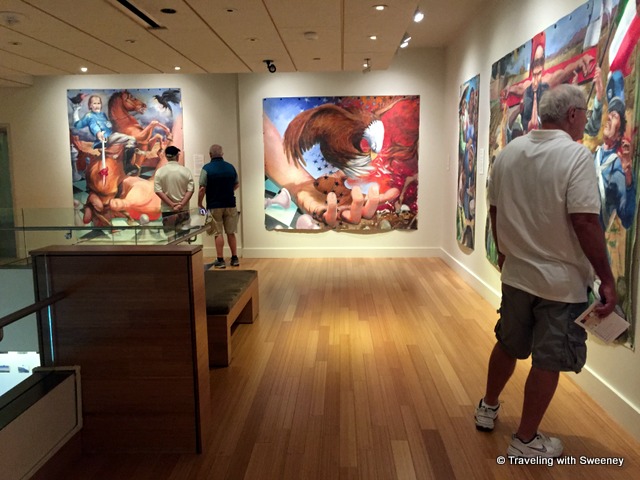 “Fear of a Red Planet”, paintings by Steven Yazzie in the Edward Jacobson Gallery of the Heard Museum

The Heard Museum is renowned for the caliber of its ongoing and major changing exhibitions.  We were fortunate to see the special exhibition presenting the art of famed 20th-century Mexican artists, Frida Kahlo and Diego Rivera, and exploring the couple’s relationship and lives. (The exhibit ran through September 4th, 2017). Their art, such as Frida’s Self Portrait With Monkeys (1943) and Diego’s Calla Lily Vendors (1943) were among the 33 paintings and drawings by the couple that were on exhibit. But I was particularly taken with the photographs of Frida, Diego, and their contemporaries that included their time spent in the United States giving a compelling look into their lives. Another highlight of this exhibit for me was the display of several mannequins dressed in colorful dresses, skirts, blouses, and shawls inspired by Frida’s style.

Aunt Vi fondly remembers the artists bringing their beautiful creations to the museum for consideration of purchase for the shop. She remembers especially a man who entered the shop with a simple brown paper bag. Inside was gorgeous hand-made jewelry of his own creation.

The museum should be a must-see for those visiting the Phoenix area, especially if they have interest in American Indian culture and/or art.

Dining tip: With so much to see at the museum, it’s nice to have coffee and dining options right at the museum, too. The Courtyard Cafe, which is open to the public and doesn’t require museum admission, has a menu of sandwiches, salads, and desserts. The Coffee Cantina offers coffee, other beverages, and snacks.

Neighborhood tip: Just off Central Avenue in downtown Phoenix, the Heard Museum is located in one of Phoenix’s 35 historic districts, the Alvarado. If you have a chance to stroll or drive through the neighborhood, you’ll see many large, prominent homes of various architectural styles including Spanish, Tudor, Georgian, and American Colonial on its tree-lined streets.

For more information: The Heard Museum

16 thoughts on “Heard Museum: A Cultural Highlight in Phoenix”

Perhaps you recognize this location from trailers