The Art of Ana Uribe at La Baguette in Lima

“Art” is a three-letter word that intimidates many. Does “art” have to be restricted to museums visited only by a certain segment of society? If it wasn’t bought in a gallery, is it still “art”? Where, exactly, is the line between “art” and “non-art” and who are the experts to define it?

“Art is not a thing — it is a way.”
— Elbert Hubbard in a 1908 volume of Little Journeys to the Homes of Great Teachers 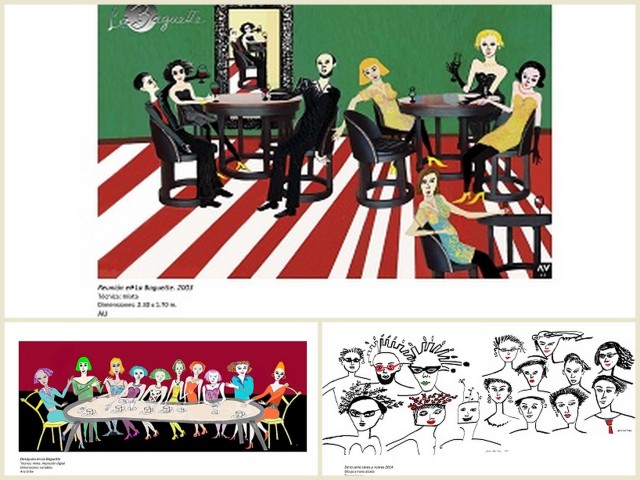 Living Art is Not Dead

Ana Uribe, artist-in-residence for La Baguette restaurants in Lima, Peru agrees with Hubbard’s pragmatic and encompassing approach. By integrating her art in La Baguette –a commercial setting — Ana creates a total ambiance. And it is a permanent work in process as the pieces change from time to time. 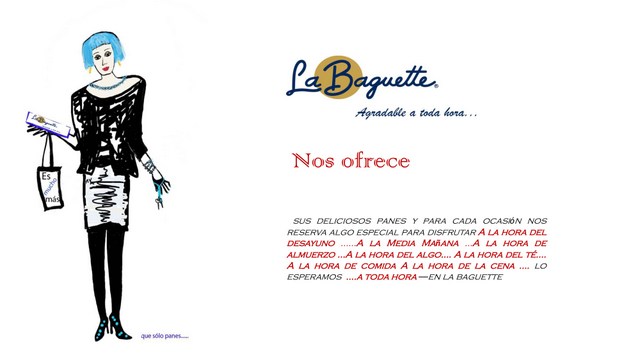 Ana’s art – which ranges from massive paintings to the furniture to the menus – reflects a theme and connection that is subtle. Some of her work is signed and other pieces have only her initials. But sometimes she conceals her signature in places that are totally oblivious to most people most of the time – which all adds to the sense of humor about the art at La Baguette. As a challenge, on your next visit to La Baguette nearest you, see if you can find the AU on the menu. Hint: while you won’t be able to smell the roses, it is a good place to begin to look. 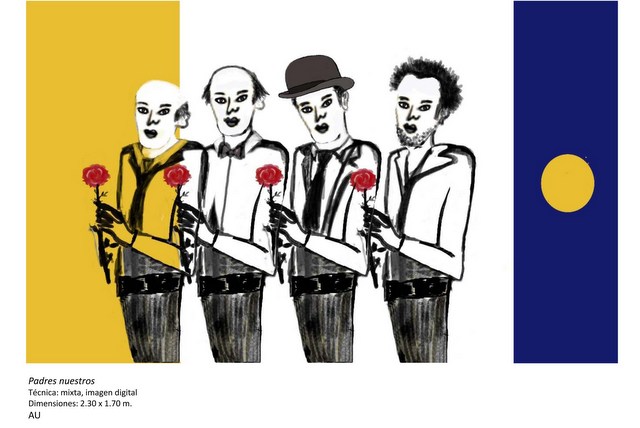 The first La Baguette in San Isidro was born in 2002. Vicky Cruz and Giorgio Badani bought a small bakery and coffee shop that had been open since the 1970s. It was a couple of blocks from where Ana and her husband David had just purchased a large apartment with natural light and ample space for a studio. 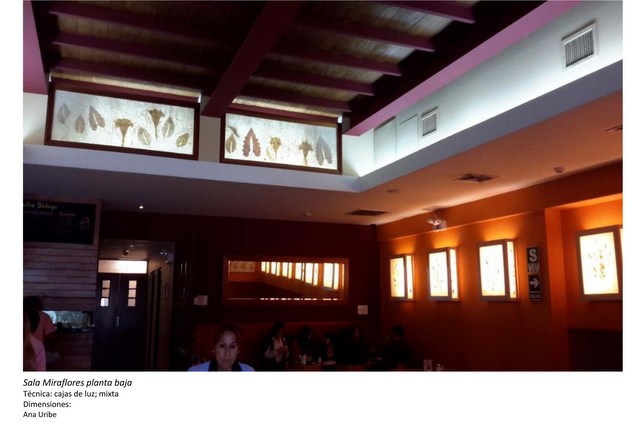 From small beginnings, La Baguette team evolved, complete with the support, drama and energy that goes into creative people working together. The essential feature of “La Baguette team” is that it includes everyone: the owners, Ana, technical people, staff, construction workers. And even customers who are asked for their opinions from time to time. 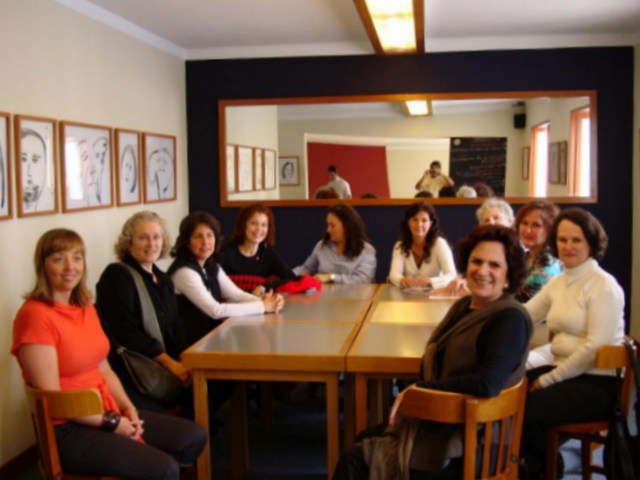 Ana’s goal is to create an ambiance that makes diners feel comfortable.

“Eating at La Baguette is like being in your own dining room. The difference is that you don’t have to go to the supermarket or do the dishes after the meal.” — Ana Uribe

An extension of feeling at home is that the service is very personalized. Consequently, some customers are there virtually every day. Others have staked out their favorite places and use the restaurant as a virtual personal office.

It Starts with the Lights 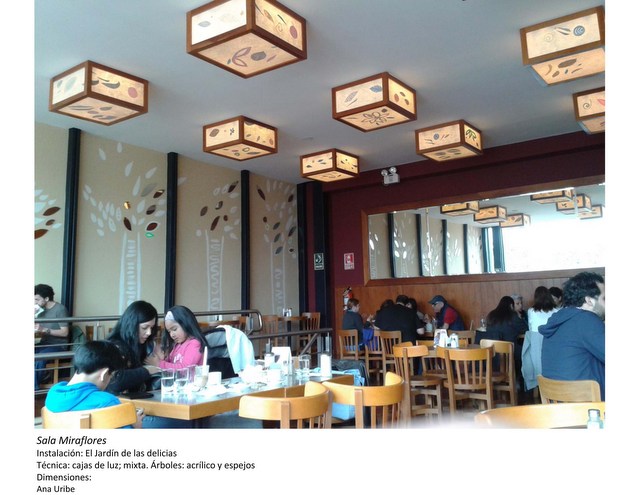 When was the last time you really looked at a lamp or chandelier in a restaurant? For Ana, light is essential. She uses a theme of coca leaves and different herbs. The ambience changes at different times of the day. Some spaces need more, others less. People who want an intimate conversation avoid any area with glare. Those on laptops want a backdrop that avoids eye strain.

Each La Baguette follows a slightly different theme which Ana develops. Once the lights are in place, it is time to figure out which painting will go where.To take a break from the major pieces, she may spend some time designing menus or coasters or coffee mugs.

Once the collection for the most recent of La Baguettes is underway, “the team” swoops in to offer opinions and suggestions. From time to time, Ana has to painstakingly explain why something simply won’t fit in a certain place, but consensus is the best outcome.

Ana has explored this theme since 1999 when she had her first Exhibition de Arte de Vivir in the John Harriman Gallery in Lima. She has since gone on to do six projects of art living with people and people living with art. This philosophy defines her relationship with her work/passion. 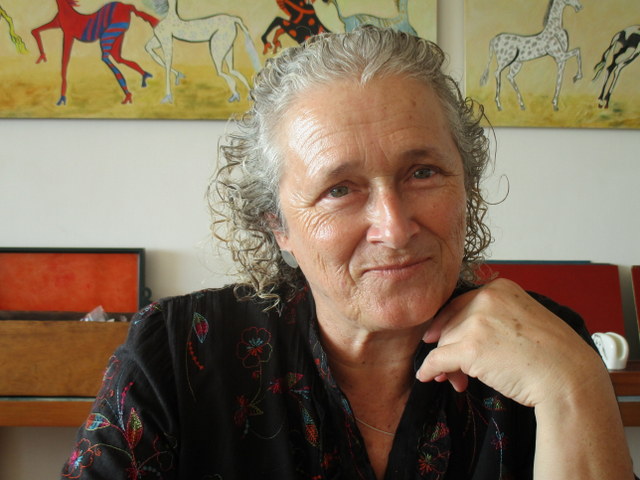 Ana is often found at La Baguette sketching, having lunch or entertaining friends. Anyone interested in buying her living art can contact her directly by email: anauribe@artedevivir.pe

About the Author:
Jody Hanson is an insufferable travel junkie who currently lives in Medellin, Colombia. To date she has visited 107 countries, lived in eight and holds passports in three. Her (some would say irresponsible) retirement plan is to keep going until she drops. At that time she wants a Muslim burial: wash the body, wrap it in a white sheet and plant it by sundown. In the meantime, Hanson continues to have more than her share of adventures and misadventures, both of which she embraces equally.

Editor’s Note: As regular readers of TWS know, art is a key element in our travels. Thanks to Jody for sharing this look at artist Ana Uribe and her innovative work at La Baguette. I look forward to visiting Lima sometime and enjoying Ana’s work in person.

5 thoughts on “The Art of Living: Arte de Vivir at La Baguette”