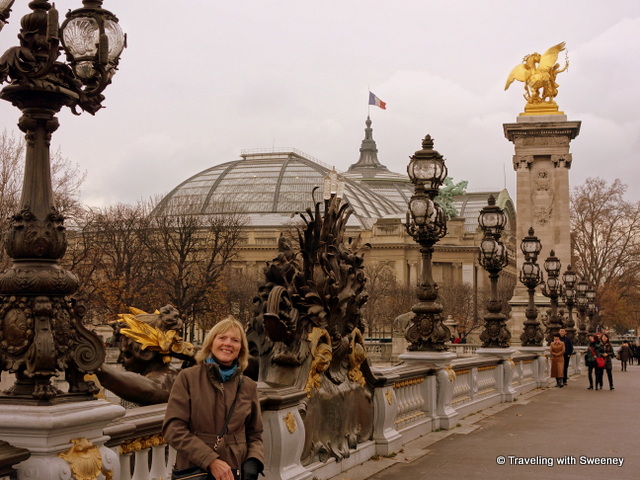 We’ve been to Paris a number of times, but Sweeney could never get enough of the City of Light. When visiting Paris, she enjoys discovering and exploring new things but is also very excited repeating Paris icons, such as the Eiffel Tower, the Arc de Triomphe, and Notre Dame. 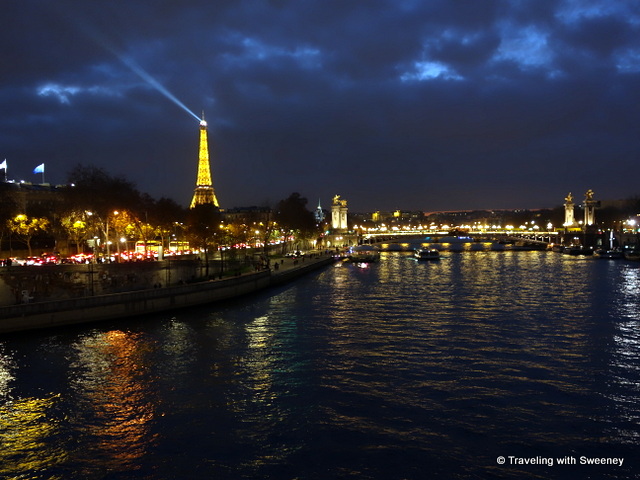 The magical lights of the Eiffel Tower

I love Paris too, but I really love seeing Sweeney so happy there. Last December, we visited for three days prior to our Christmas tour in Provence. Someday, we will need to figure a way to spend a month — or longer.

What were her favorite things to do in Paris? 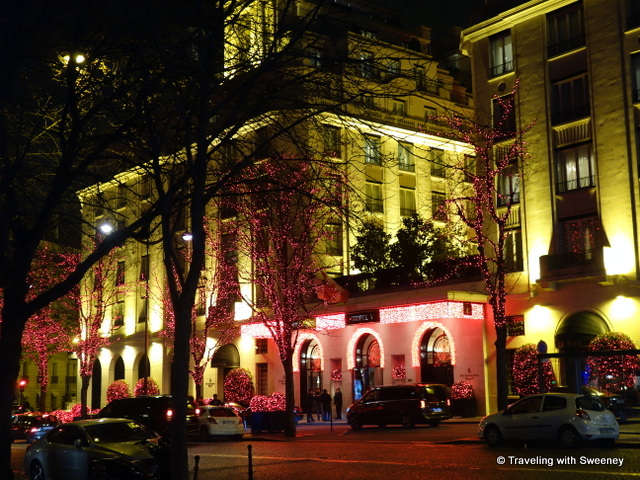 Our Paris stay kicked off in grand style. We were excited as we anticipated the many things that we had planned for the trip but at the top of the list was staying at the Four Seasons Hotel George V. We were happy that we took the Four Seasons’ transfer service from Charles de Gaulle International Airport; it was a good way to start — a convenient, reliable, and comfortable ride in style to the hotel.

Even with our high expectations, we were amazed as we stepped into the magical lobby. It was adorned with beautiful tasteful decorations, but the centerpiece of them was the work of art, designed by their Artistic Director Jeff Leatham, two giant (over 4 meters/13 feet) sitting polar bears made of red mirrors (over 900) in various angular cuts and sizes. “Red Polar Chic” was completed by a small evergreen tree made of the same red mirrors located beneath the lobby candelabra and before the bears. 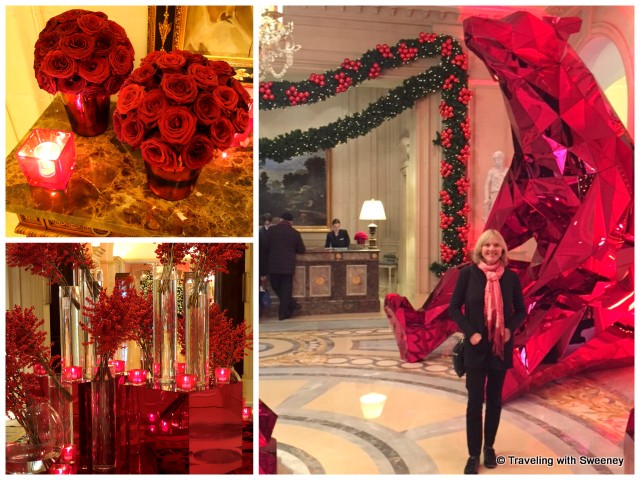 Christmas decor at the Four Seasons George V in Paris

The decorations throughout the hotel, including many beautiful flower arrangements, the lobby art from the previous year, two large reindeer of gold mirrors, and the courtyard with its many red-lighted trees, got and kept us in the Christmas spirit during our entire stay.

We both relished time to relax in our luxurious and comfortable Deluxe Room and enjoyed the top-notch service that we’ve always found in Four Seasons hotels. 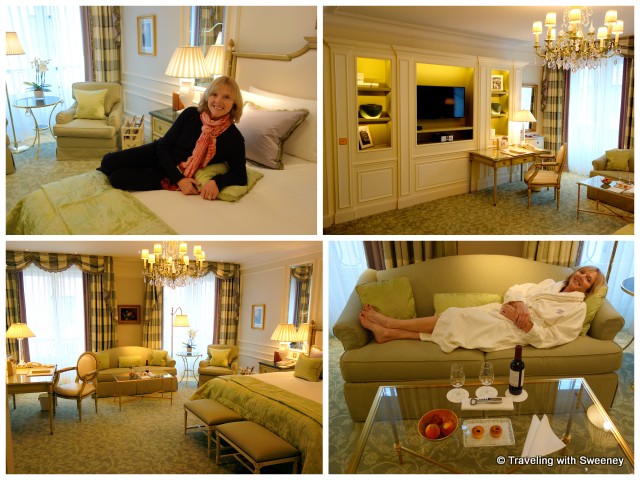 We highly recommend a stay at the Four Seasons Hotel George V, but even if you have other accommodation plans, we would suggest visiting the hotel for a meal, or a drink, or even just to view the splendor any time, but especially at Christmas.

Indulge the taste buds — it’s not always about wine

Stopping at cafes is one of Sweeney’s favorite activities — and it’s not always about wine. Cappucino and croissants are perfect for starting the day and one of her favorite places for that is La Belle Ferroniere which is quite close to the Four Seasons Hotel George V. That keeps her satisfied until lunch, when she is known to have a strong preference for Croque Monsieur (sadly, not pictured). And don’t forget the desserts and pastries! 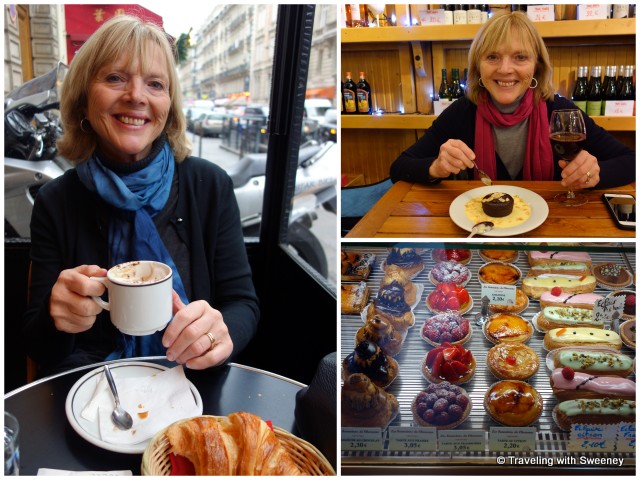 Cappuccino at La Belle Ferroniere and pastries in Paris

Sweeney is a wanderer. 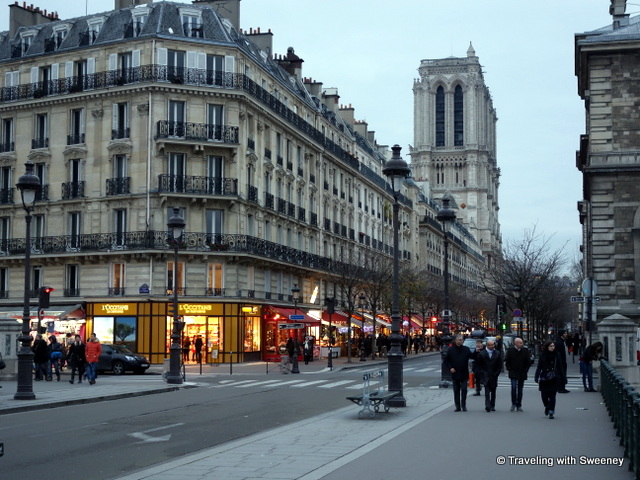 She enjoys walking around cities and exploring various areas with no particular plan. She doesn’t mind getting a bit lost – it’s part of the travel adventure for her. These often provide serendipitous discoveries but they also offer a better behind-the-scenes feel of places. In contrast, I prefer a little planning for the areas we plan to tour so that we don’t unknowingly miss a “must-see” that we may be walking near. 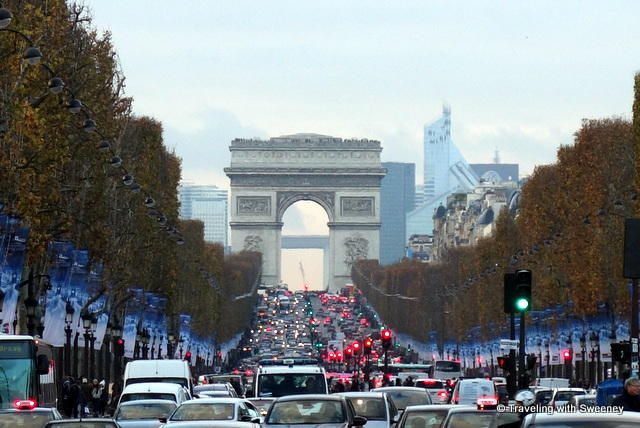 Arc de Triomphe on the Champs-Élysées

Our hotel’s location, a short block off the Champs-Élysées and a few blocks from the Arc de Triomphe, was perfect for our stay. We could walk to most of the things we wanted to see and the Metro stations were very near to enable the longer reaches. 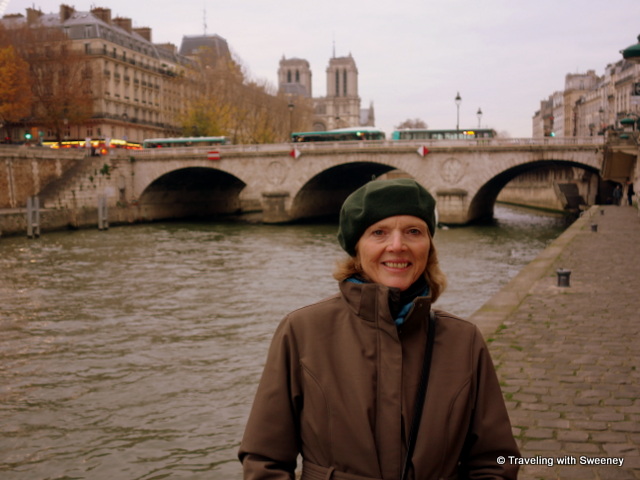 Walking along the Seine, Notre Dame in the distance

I don’t think Sweeney will ever tire of walking along the Seine. We’ve walked the Left Bank and the Right Bank, back and forth over the bridges, and at street level and below many times.

Shop and cook with the locals

Sweeney especially enjoys activities that enable us to interact with the locals. Typically these have been among our most remembered moments of our trips. So we eagerly anticipated our Paris Cooking Class: French Christmas Menu.

We met Chef Dominique Dury at his apartment in the 11th arrondissement and he made us feel instantly at home, as though we were old friends over for dinner. We sat down and had a chance to get a feel for his experience and also what lay ahead for the day. Then we were off to the nearby open-air market to get the ingredients for the meal. The Marché Charonne extends for blocks in the center of a large boulevard. The sights and aromas of the foods including some that were already prepared alone made it a great experience. The diversity of items we don’t see at our U.S. farmers markets, such as the thousand and one cheeses, was enhanced by having an experienced chef who could answer questions about the unfamiliar vegetables, meat, or seafood we saw. 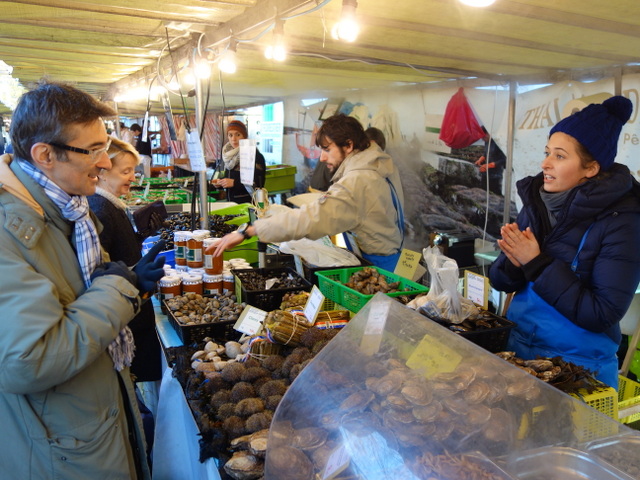 With Dominique Dury at Marché Charonne

As we watched and listened (Sweeney understood some of the French), Dominique engaged with the various vendors, asking questions and discussing best choices. We enjoyed this part of the class equal to the other two parts —  the meal preparation and indulging in our accomplishment. A final stop at a wonderful boulangerie (it was a neighborhood, family-owned bakery), and we were ready to cook. Dominique was a very good instructor, at times describing what we should do and other times explaining as he performed the task himself. 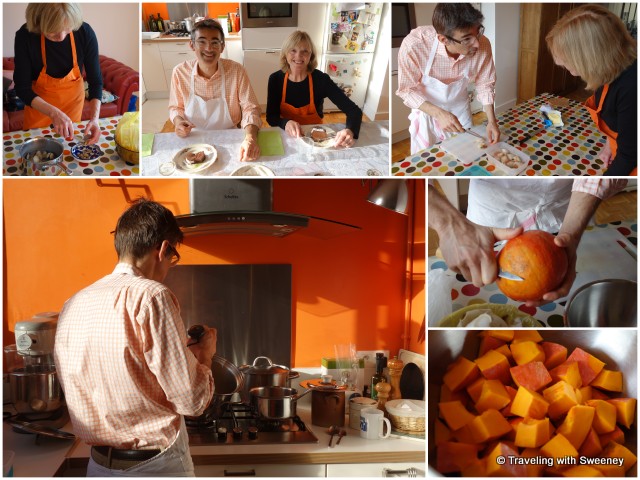 The preparation was a lot of fun and seemed to be over very quickly. Then it was time to enjoy the meal, and delicious it was. Dominique asked his son and his son’s friend to join us which enhanced our experience of engaging with Parisians.

Just blocks away from our cooking class is the Père Lachaise Cemetery. 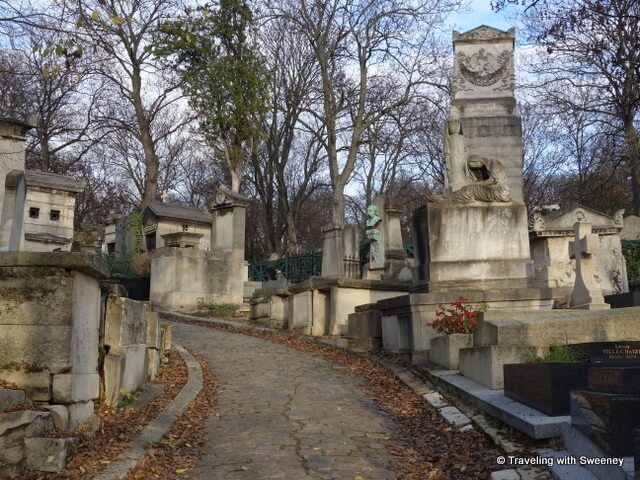 Somehow, I had the mistaken notion it was a small cemetery; in fact, it is the largest in Paris (excluding suburbs). The map at the entrance also belied the expanse, and we were excited at the number of other famous people buried here (the location of the graves indicated on the map) including Oscar Wilde, Edith Piaf, Honore de Balzac, Gioacchino Rossini, Marcel Proust, Marcel Marceau, Frédéric Chopin, Abelard and Heloise, Georges Bizet and many more. 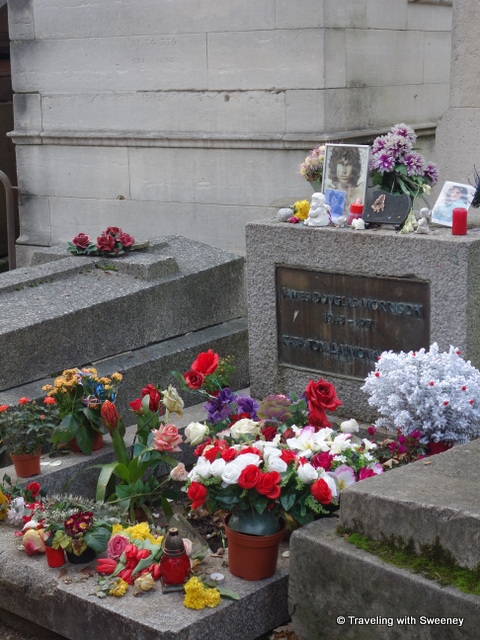 Part of our attraction to Père Lachaise Cemetery was that it is the site for many pilgrimage visits to Jim Morrison’s grave. Sweeney is interested in a very wide variety of music genres and she has always been a big fan of The Doors. Without a map we only located Morrison’s grave by asking someone; it was the only gravesite of a notable that we found though we attempted to find others. It was also the only one we noticed with any people, a small group (about 20).

I recommend getting a map available at the entrance office if you are interested in seeing specific notables’ graves. However, it is definitely worth a visit just for the lovely walk on the winding paths up and down the hills among the beautiful trees and diverse, ornate tombs and markers. In the late-afternoon winter sun, we felt an eerie peacefulness. 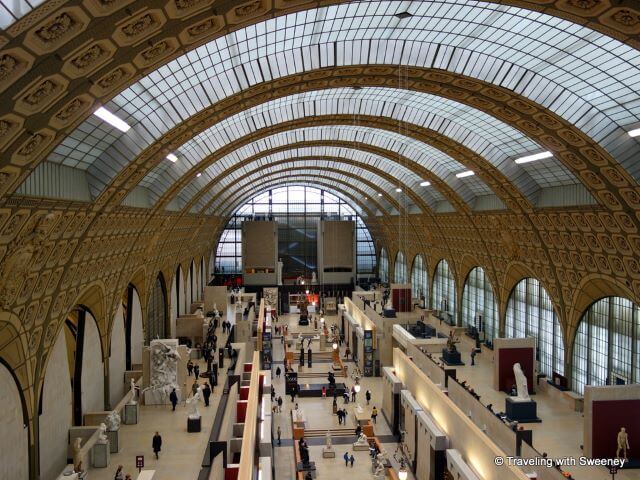 We’d never had time to visit the Musée d’Orsay during previous visits, so it was a must-do for us this time. We thought the building was fascinating. It had the feeling of a cross between a beautiful European train station and a modern art museum — and indeed, it was originally built as a railway station, a very grand one, before its transformation. We enjoyed many of the permanent collections and the featured Marquis de Sade exhibition which was intriguing, thought-provoking, and shocking at times.

We’d often heard about the design and architecture of the famous Parisian department store, Galeries Lafayette, but we only made our first visit in December. The holiday decorations were mesmerizing, particularly the large, gorgeously-decorated, inverted Christmas tree hanging from the ornate glass domed ceiling. 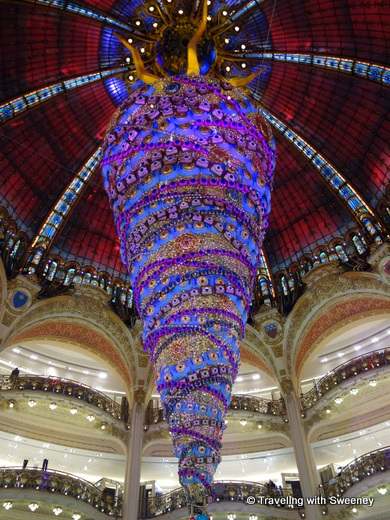 We were among many shoppers and tourists gazing upward and snapping photos. It was especially fun to experience the bustle of Parisian Christmas shoppers. There was a similarity here to the excited buzz of holiday shopping in the United States, and we had fun watching as people engaged in a primary Christmas ritual. 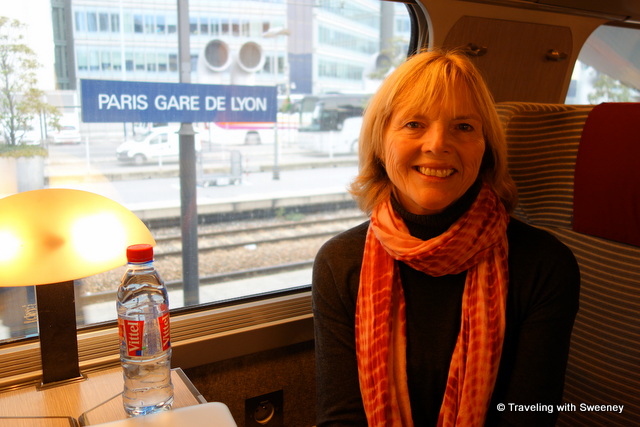 On the TGV train at Paris Gare de Lyon

Too soon, our stay in Paris was ended, but our next experience was another highlight of the trip — taking the TGV high-speed train from the Gare de Lyon to Marseille in the south of France.

32 thoughts on “Sweeney in Paris: Her Favorite Things”