How do I even begin to select Budapest photos to share on Traveling with Sweeney?

As we’re starting to go through the more than one thousand photos we took in Budapest, we’re realizing what a daunting task it is to pick photos for upcoming posts. To just give you a sample, here are just three Budapest photos from three days during our visit. There will be much more to come. 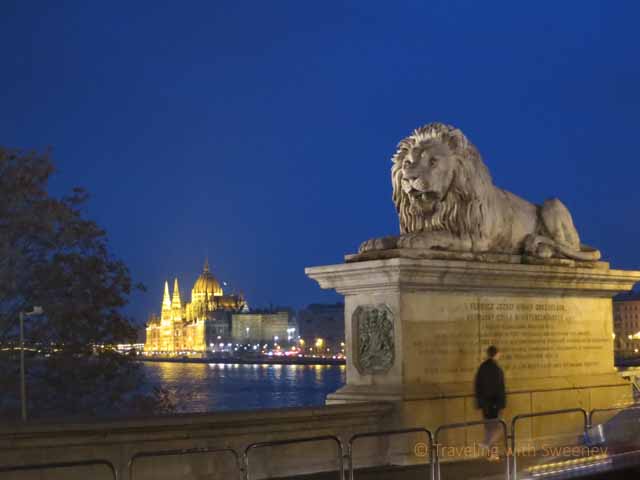 It only took a few minutes walking around during our first trip to Budapest to fall in love with the city. The Danube separating Buda and Pest (the two cities that joined to become Budapest in 1873) was a major focal point with stunning buildings along the shore. Parliament which dominates the Pest or eastern shore of the Danube is pictured above at that perfect time when the lights make the buildings glow and the sky is that great shade of blue. It is the largest building in Hungary and the third largest Parliament building in the world and the largest (and among the oldest) in Europe. But its beauty is why we’ve included it here and a main reason it is one of the most visited sites in Budapest. Modeled after the Palace of Westminster, the UK’s Parliament, the Neo-Gothic building was one of our favorite sites in Budapest and one we will cover in more detail in a future post.

The picture is taken from the Buda side of the Széchenyi Chain Bridge, the first permanent bridge across the Danube in Budapest and the second in Europe. It is the most picturesque of the 8 Budapest bridges and seems omnipresent in photos of the city day or night. The name comes from the chains of the suspension bridge hanging between the towers and also from István Széchenyi, one of the great statesmen of Hungary and a major supporter of its construction. The stone-carved lions on each side and end of the bridge are similar to those of Trafalgar Square but predate them. From either side of the bridge and along the walkway, we couldn’t stop taking photos. 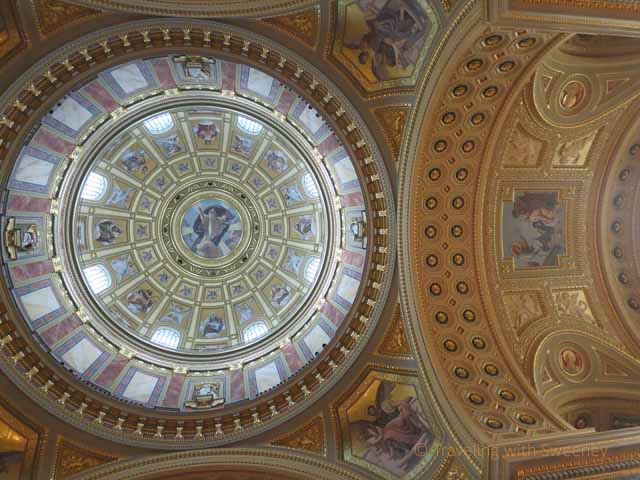 Dome and canopy in the Basilica of St. Stephen

Continuing the theme of beautiful structures in Budapest, St. Stephen’s Basilica, is another key example. It is named after the first King of Hungary, Saint Stephen I, whose right hand is preserved as a relic in one of the chapels of the basilica. Pictured here is the interior dome and canopy of the basilica; it does a good job of representing the opulence of the interior. The exterior is also impressive with the dome flanked by two bell towers and with a lovely square before it. The dome is 96 meters, the same as Parliament; and these are the two tallest buildings in Budapest. That they are the same height is no coincidence; the Hungarians have a thing for numbers and because 896 AD is considered the year Magyars first settled in Hungary, they use the last two digits. Sharing the 96 meter height is also considered symbolic of the equal importance of religion and government. The two buildings are less than 2 km apart on the Pest side of the Danube. 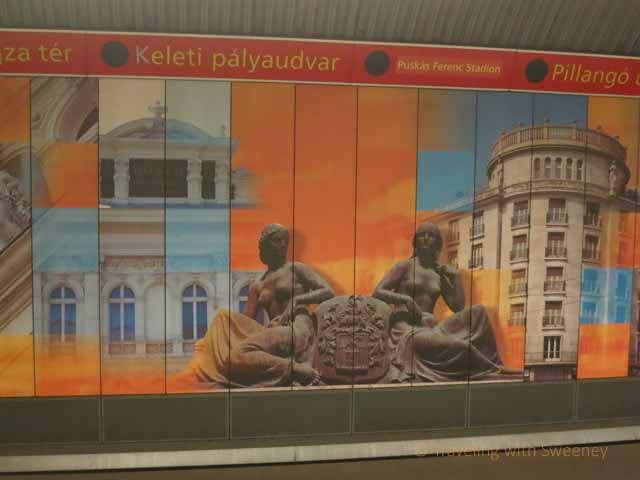 Finally, in keeping with my appreciation for art, I was taken by interesting design and art in some of the Budapest Metro stations. This photo was taken of the wall along the tracks in one of the stations on the Red Line. Although it is the fourth oldest underground railway system in the world, we were impressed by its cleanliness and reliability, though some locals complained that reliability is consistent with its age. The line that runs below Andrássy Avenue, Budapest’s major boulevard, was declared a UNESCO World Heritage Site in 2002. We found the Metro (and other public transportation systems in Budapest) very easy to use and helpful in getting around to save wear and tear on our bodies to maximize our sightseeing.