At Ferenc Liszt International Airport, I handed our destination address to the taxi driver, excited to be in Budapest and heading to a luxury hotel in a city I’d long wanted to visit.

In the taxi for the 30-minute ride to Pest (the section of Budapest on the east bank of the Danube River), I took in the scenes of daily life in the outlying districts of the city before arriving at the highly-acclaimed Four Seasons Gresham Palace, the epitome of a Budapest luxury hotel. 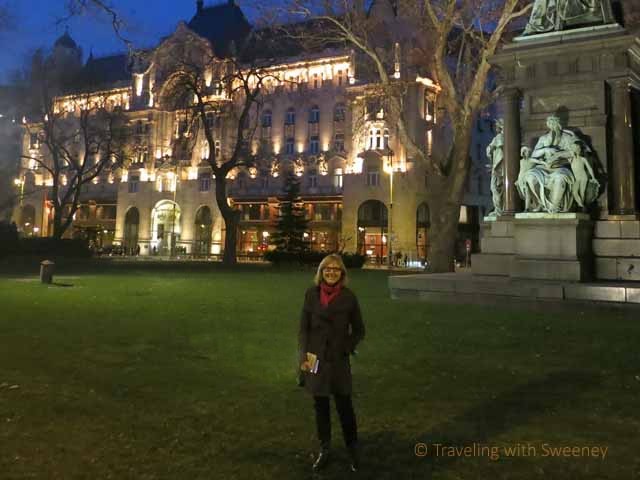 How did it feel to drive up to this elegant building in Budapest, a city that has always had an aura of international intrigue for me? Splendid.

Budapest itself is breathtakingly beautiful on the banks of the Danube with stunning landmarks on both sides, easily accessed by the city’s eight bridges.  Situated at the foot of the Chain Bridge with views of the Royal Palace, St. Matthias Church and the Fisherman’s Bastion on Castle Hill, the Four Seasons enables you to make the most of Budapest’s beauty. 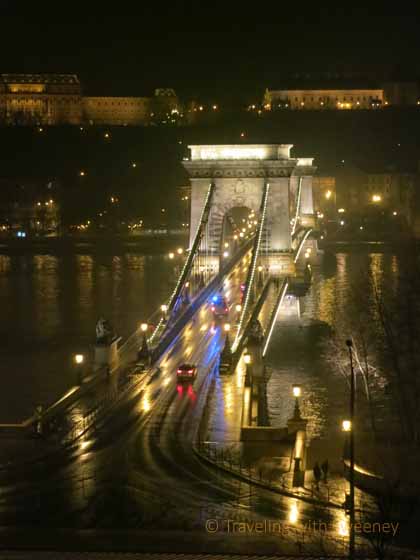 Night view of the Chain Bridge from our room

What better place to get an introduction to a magical city but in a hotel that feels magical itself. We anticipated that we’d fall in love with the hotel (and Budapest) and we did. 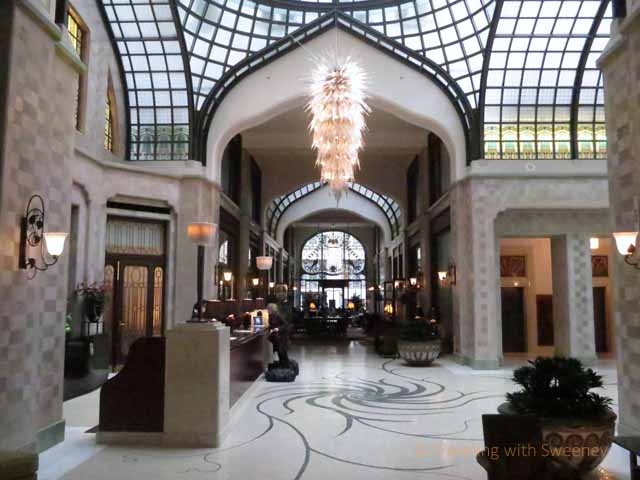 Checking in at the Four Seasons

Though we felt a bit mussed from our travels from Berlin, we experienced a warm welcome from the hotel staff. The front desk receptionist made us feel very welcome and personally escorted us to our Danube River-View room sharing some of building’s history along the way.

Opened in 2004 after a major two year restoration, the Four Seasons Gresham Palace is a historic landmark building that retains much of its original Art Nouveau grandeur and combines the comforts of the 21st century with the elegance of a golden era, seen in both the exterior architecture and the interior designs. 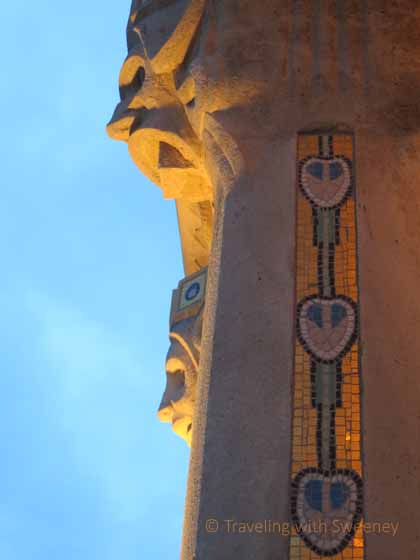 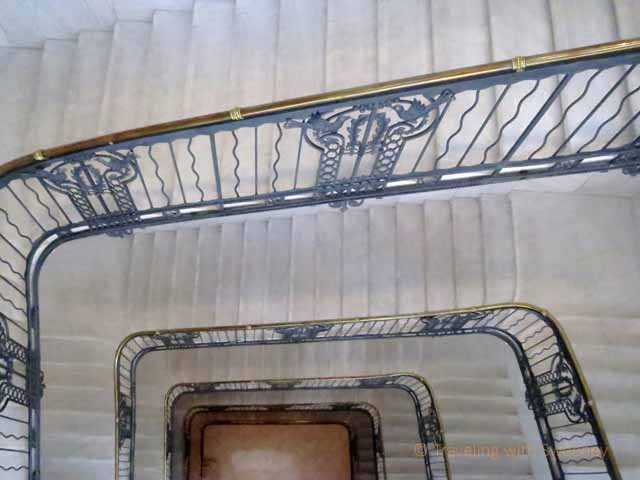 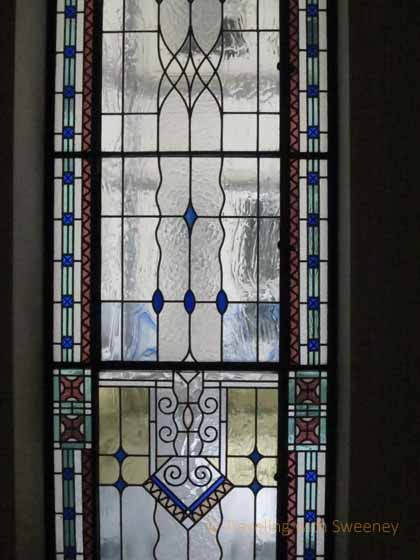 One of the many beautiful stained-glass windows

From its earliest days, Gresham Palace has been a very distinguished address. Built by the Gresham Life Assurance Company and completed in 1906, it was a luxury apartment building that also housed prestigious shops, boutiques and a popular Gresham-Venezia Cafe where Hungarian artists convened in the 1920s and after. But things weren’t always rosy for the Gresham. During World War II in 1944, the building was severely damaged in the Siege of Budapest and only makeshift repairs were done. In 1948, the formerly grand apartments were converted into small state offices by the Hungarian Communist Government and fell into further disrepair. Now magnificently restored for the Four Seasons it’s once again an architectural gem. The ironwork, woodwork, stained-glass, mosaic tile flooring and other creative design touches give the hotel the feeling of stepping back to the elegance of the early 20th century. 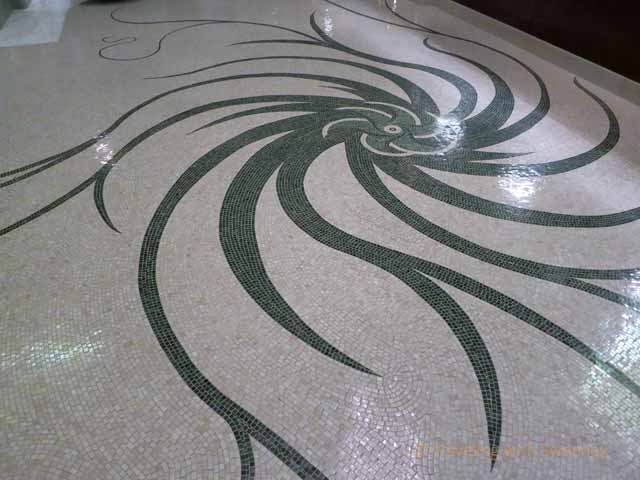 Mosaic tile floor in the lobby

What first caught our attention as we entered our room was the hall with lovely parquet flooring leading to the bedroom straight ahead and a large marble bathroom on the left. At the far end of the spacious, bright room was a window and door leading to a step-out balcony. It was immediately apparent that this was truly a room with a Danube River view. Directly in front of us were vistas of the Chain Bridge over the Danube and the Castle District in the Buda Hills on the western bank. 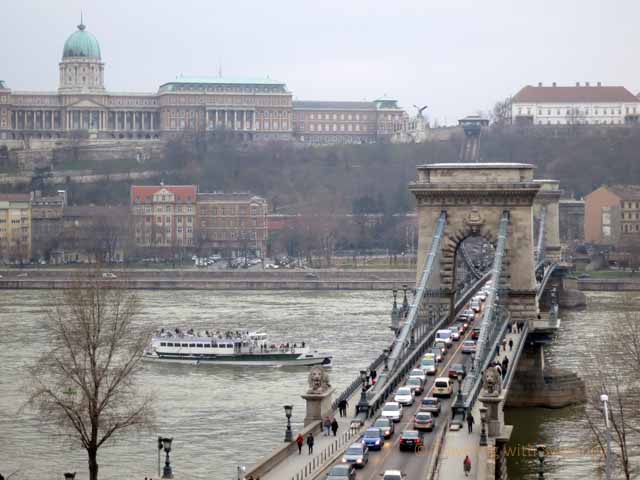 The view from our room was spectacular even on a gray late winter day, but I can imagine it’s even more so when the sun is shining. 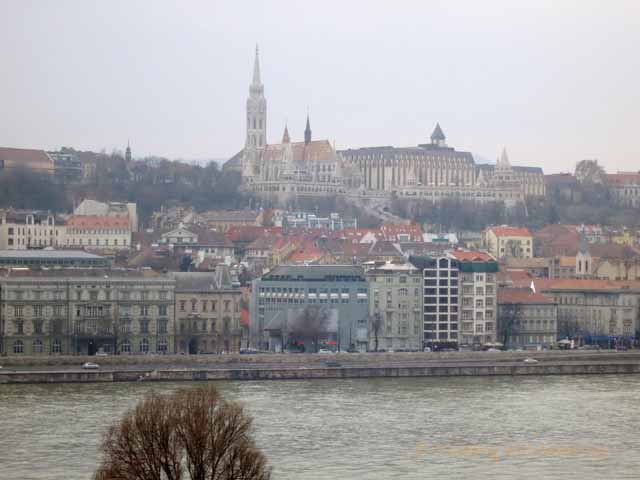 St. Matthias Church and Fisherman’s Bastion atop the Buda hills, across the Danube 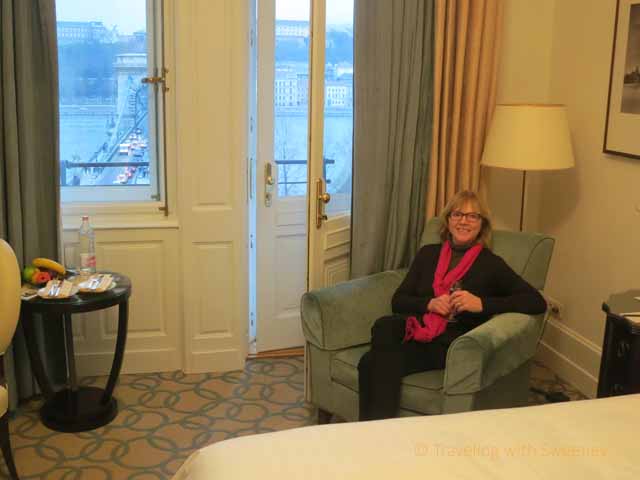 Relishing the comfort of a room with a view

There’s so much to see in Budapest, but the king bed was calling me to test it out and it was so comfortable. I was tempted to lay back and enjoy the amenities of the room after the busy travel and trade show schedule of the past few days in Berlin. But Budapest called and I got up and explored the scenic world just outside the hotel entrance. (Watch for future posts for more about Budapest.) 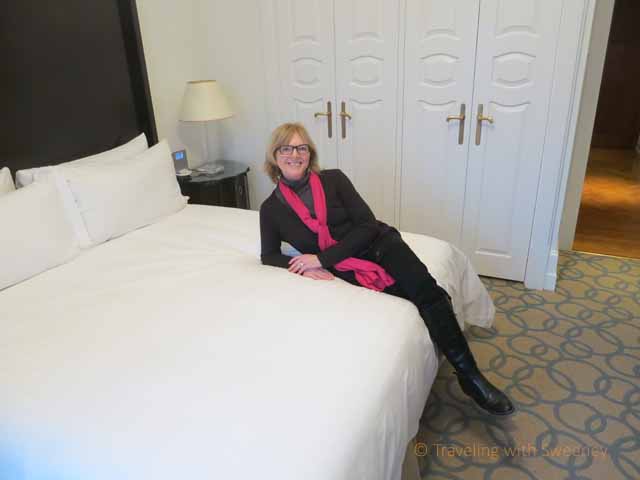 In a luxury mood

The hotel is in a great location for easily reaching the key sites on both sides of the Danube, including St. Stephen’s Basilica, Parliament, and the State Opera House on the east bank; and the Castle District on the west. It’s also very close to high-end shopping on bustling Váci street and the charming (though touristy) Vörösmarty Square with many cafés and shops. Public transportation, including the Metro underground railway, is nearby too. Although convenient to many sites and activities, you feel far removed from the hubbub at the hotel.

Consistent with the excellence of the rest of the hotel, the Gresham Restaurant is a quiet, elegant place for breakfast, lunch and dinner. In early days, this was the location of the Gresham Kávéház, the coffeehouse frequented by the arts community of the early 20th century. At Sunday brunch, we sat by the window watching passersby while planning out our day’s itinerary. The full American Breakfast included an entrée selection from the menu and a well-stocked buffet with breads, pastries, cheeses and fresh fruit. Our entrée choices, Eggs Benedict and a Vegetarian Omelette, were nicely presented and delicious. 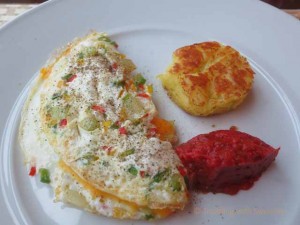 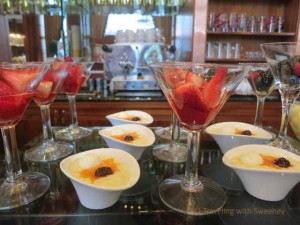 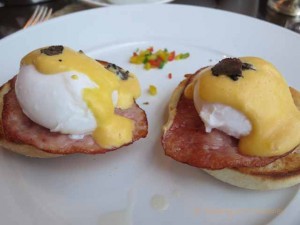 Elegant touches are everywhere with lovely floral arrangements in the lobby, halls and throughout the hotel. It’s easy to see why the Four Seasons has consistently won awards since its opening and is frequently recognized in major publications such as Condé Nast, Fortune, Travel + Leisure. 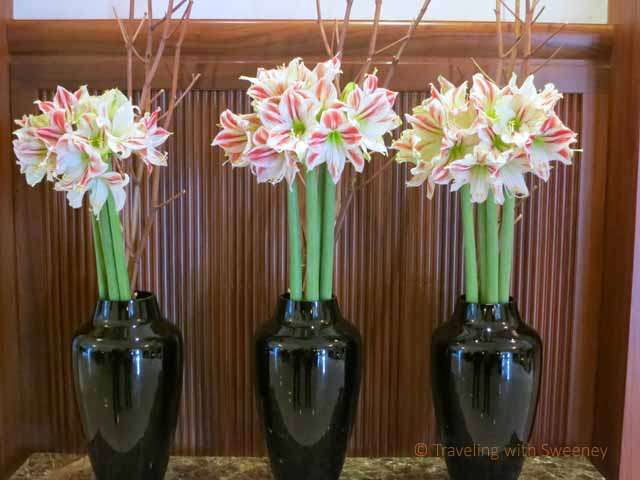 My one regret — the spa. I just ran out of time to experience that bit of luxury. So there was no exotic milk bath, aromatic Swedish massage, exotic lime and ginger salt glow body treatment or body sculpting therapy for me. Next time…I’ll make time.

Just as we expected to love the Four Seasons Gresham Palace before we even stepped foot in it, we knew that we’d miss it when we left — and we did. 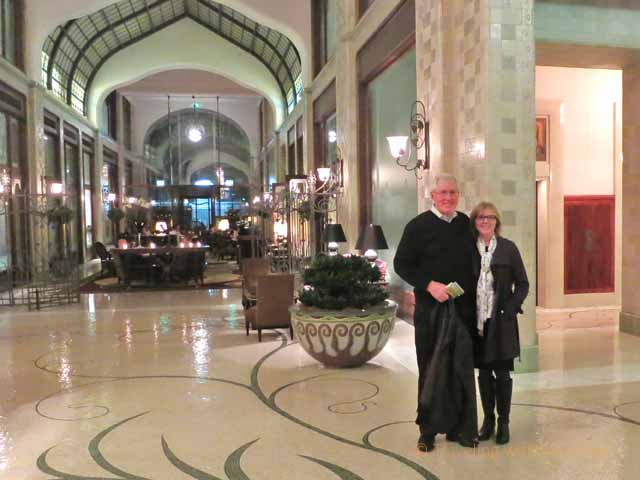 Traveling with Sweeney at the Four Seasons Gresham Palace, Budapest

Hopefully, we’ll be back…

Disclosure: Accommodations and amenities during our stay were provided by the Four Seasons Gresham Palace, but the opinions about our experience are totally our own — as always.

35 thoughts on “Savoring Our Stay at a Budapest Luxury Hotel”