Editor’s Note: Some posts on this site contain affiliate links, meaning if you book or buy something through one of these links, I may earn a small commission (at no extra cost to you!).

Locorotondo is one of the most picturesque hilltop villages of Puglia’s Valle D’Itria (Itria Valley), earning it the official designation of “Borghi più belli d’Italia”, one of the most beautiful villages in Italy. With its brilliant white buildings and peaked roofs crowning the hill, it immediately grabbed our attention and imagination as we approached from below during our Puglia road trip.

Around the Round Place

Locorotondo means “round place”, named that because of the circular layout of the streets in the old town (centro storico) with the Chiesa Madre di San Giorgio (The Mother Church of Saint George) in the center. 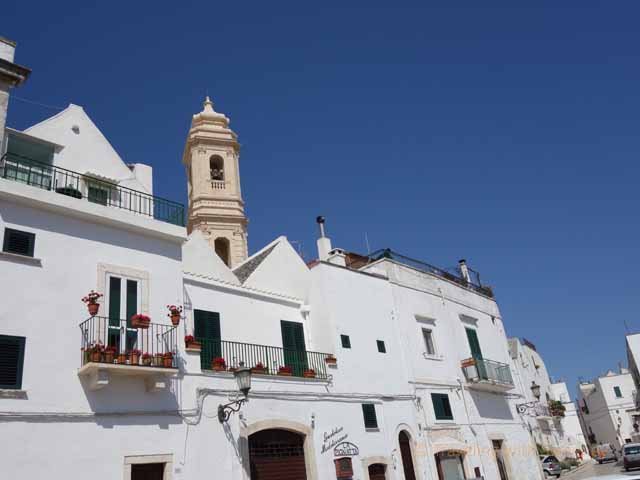 It’s believed that Locorotondo was first settled by the Greeks several centuries B.C. The earliest historical records go back to 1195 and a document written by King Henry VI of Swabia referring to the place as “Rotondo”. The town has endured centuries of economic decline, cultural turmoil, uprisings and invasions. That’s a lot of history to delve into, but for now —

Walk with me around Locorotondo 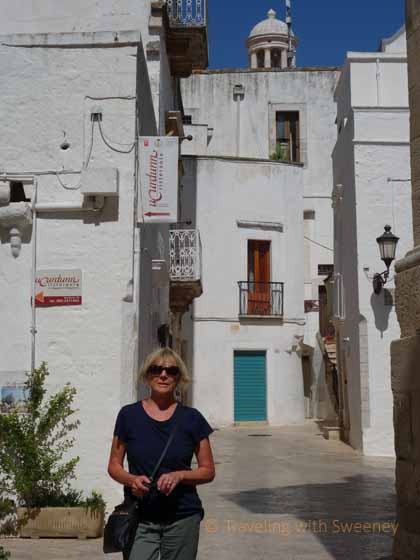 Coming into town on Corso XX Settembre, the entrance to the old town takes you past the tourist center on the right and Piazza Vittorio directly ahead. 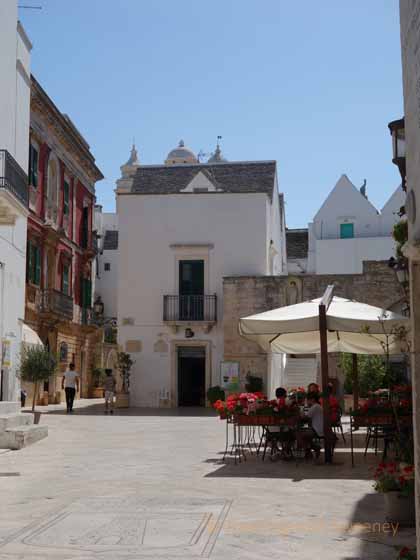 This is where we started our walk along the labyrinth of the pristine narrow streets of Locorotondo. It’s also where our driver and guide, Carlo Romano, introduced us to two gentlemen from the Locorotondo tourist center who kindly accompanied us on a portion of our walk. 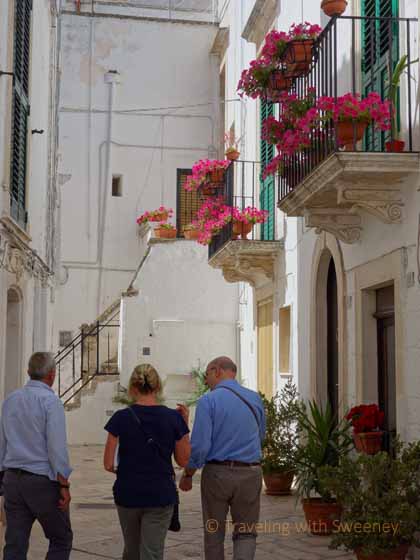 Around every corner during our walk around Locorotondo, we admired the glistening white buildings, peaked roofs, and balconies adorned with flowers. The peaked roofs (cummerse) made of limestone slabs (chiancarelle) of the simply-designed, whitewashed buildings that line the narrow lanes are distinguishing characteristics of the old town. 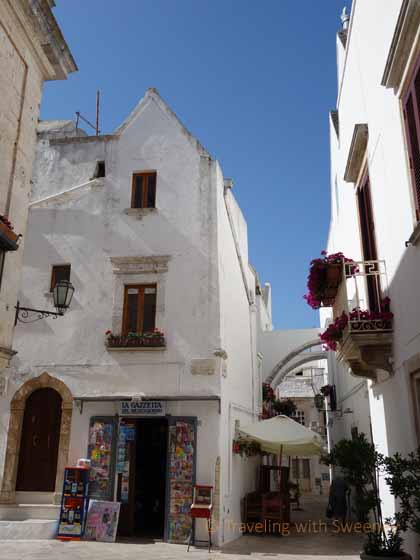 At the end of the lane below is the baroque façade of Palazzo Morelli, built in 1819 as an aristocratic residence with the wrought iron balconies you see on many of the houses in Locorotondo. Today, Palazzo Morelli is home to the town library. 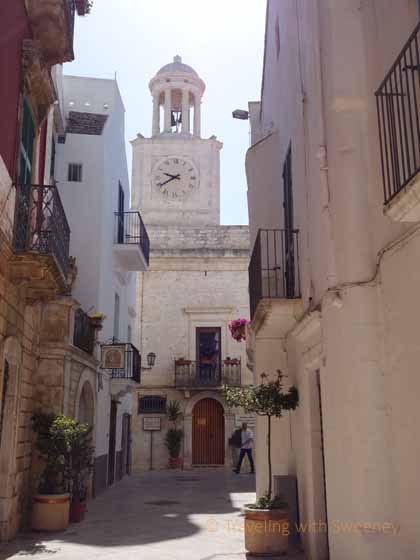 Since the beginning of the 14th century, the buildings have been whitewashed — originally to reflect the sun to combat the black plague of the dark ages. Today, it is a tradition that is kept proudly as a symbol of the town’s culture and history. 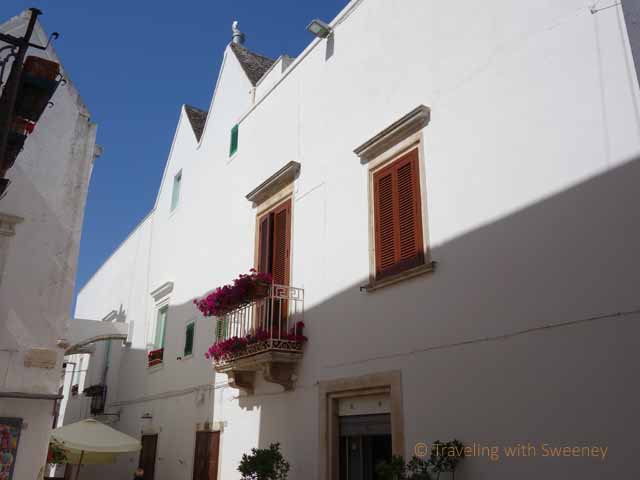 Great care is taken by residents to maintain the buildings and streets. On the morning of our walk, we noticed a man refreshing the paint (a limewash mixture) and women washing the stones of the lane in front of their homes. 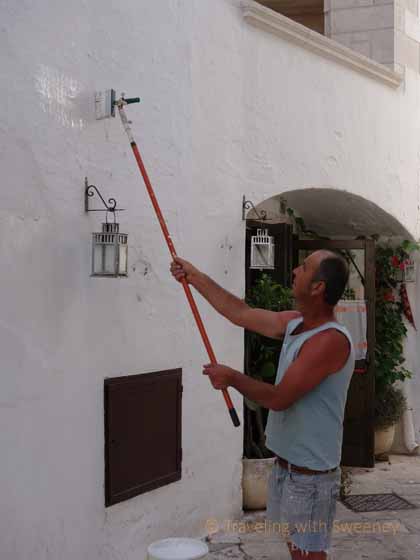 The brush instead of a roller on the handle seemed a rather interesting technique.

We have only seen a small part of Italy, but we completely agree with the “Borghi più belli d’Italia” designation. 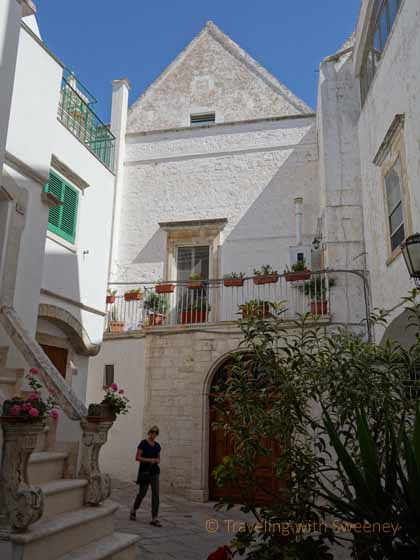 Exploring the streets of Locorotondo

It was almost too much to absorb with the little time we’d been allotted, so Mr. TWS and I scurried through the maze-like streets trying to take in as much as we could. 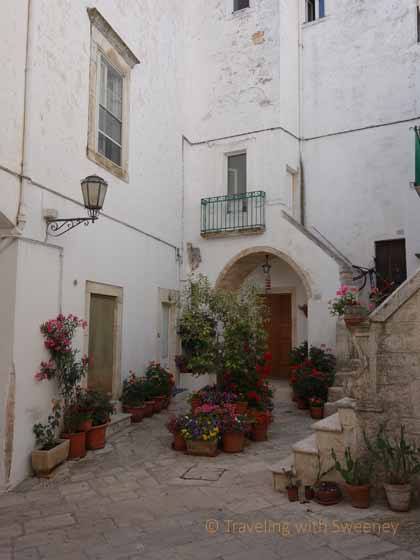 Tiny courtyards with pretty gardens were tucked away off some of the streets. 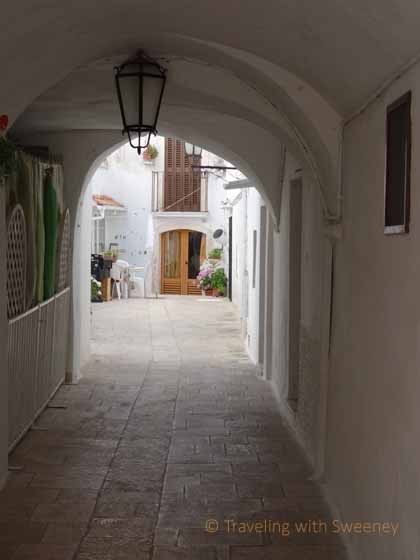 Quiet passageway to a bright courtyard

This quiet passageway opened up to a bright courtyard beyond. 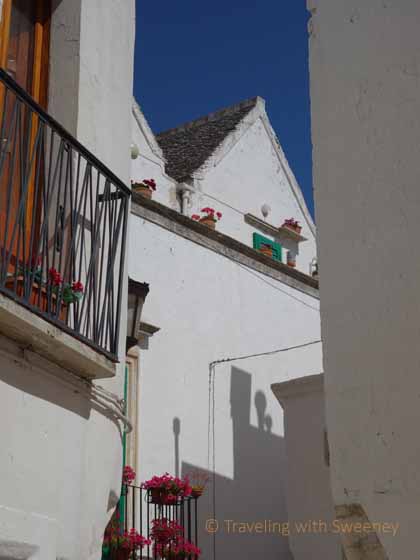 The whitewashed buildings and angles of the roofs against the perfectly blue sky created some intriguing abstract images. 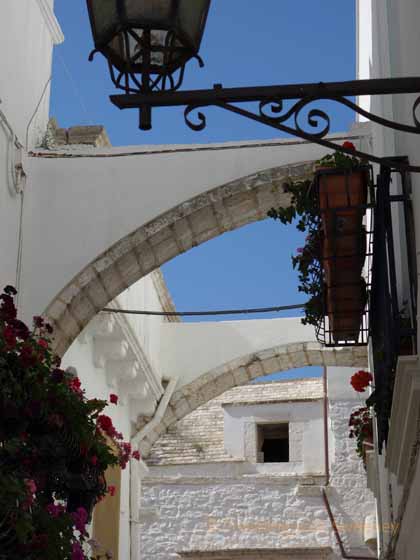 Arches across the narrow street adorned by flowers 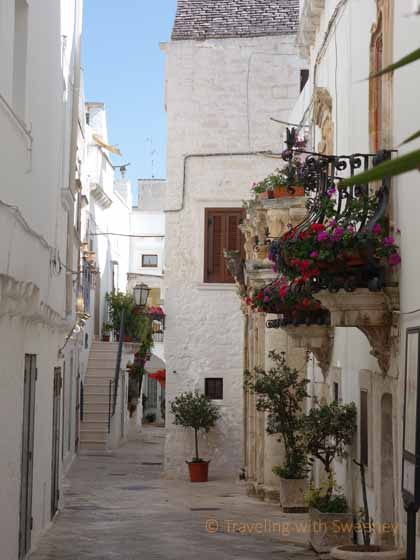 Ornate beauty of the churches

In every town we visited in Puglia, there were several churches and cathedrals with amazing interior designs, each one different from the next in style and features. These are just a few.

Chiesa Madres that occupies the center of the old town was designed by architect Giuseppe Gimma and built between 1790 and 1825. On the façade, there is a relief of “St. George and the Dragon” above the entrance. 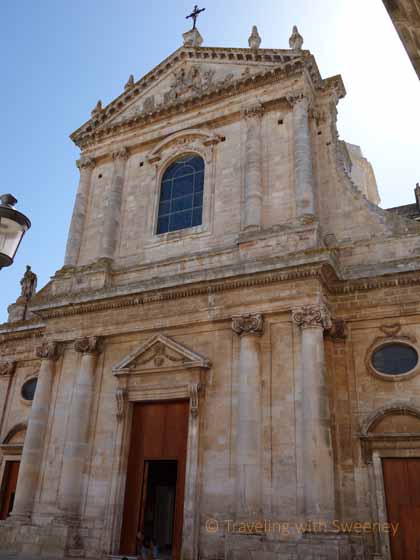 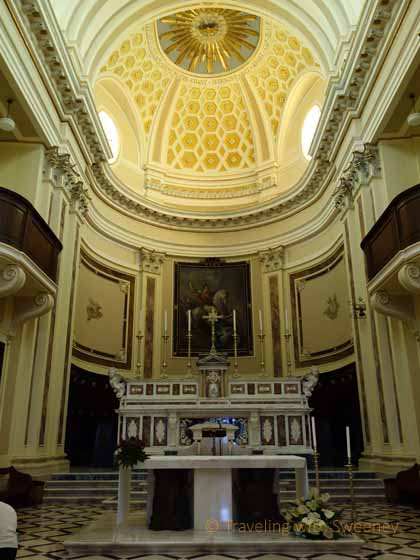 I thought the dome ceiling of the church was one of the most beautiful I’ve ever seen. 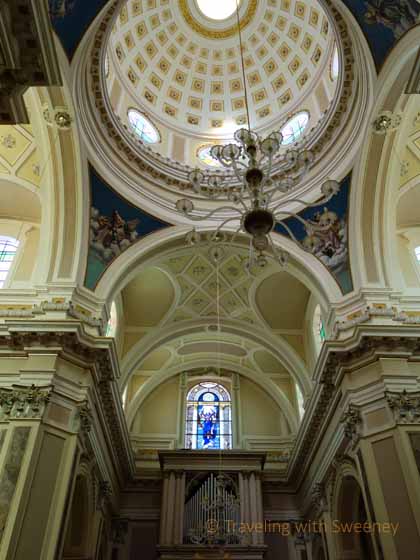 We were also shown the crypt with pieces of the original foundation displayed, a small chapel, and the church’s treasure.


This neo-classical style church built around 1600 is named after St. Rocco, the patron saint of Locorotondo and many towns in the area. He was believed to protect the people from the plague in the 17th century. This beautiful building replaced the original church after it was demolished in 1804. 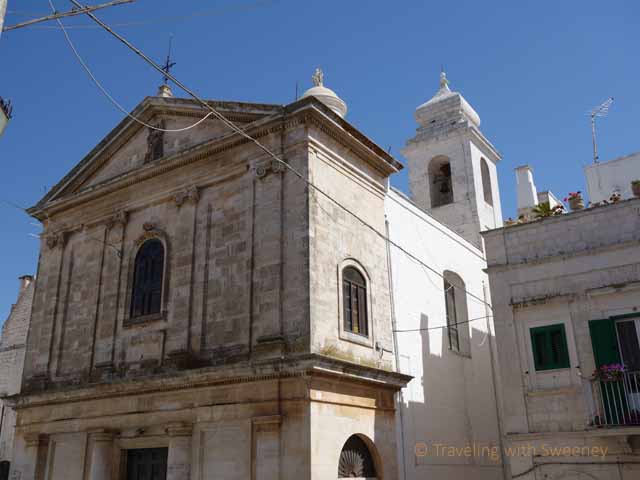 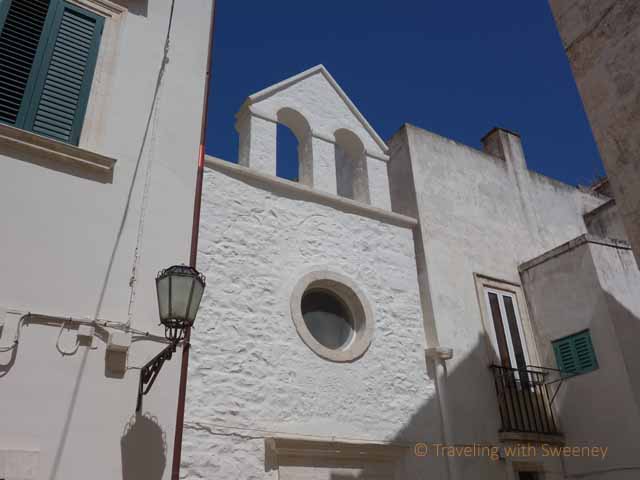 San Nicola is a small church built around 1600. It was not open for our visit, but it houses exceptional interior design and artistic decorations that contrasts with the simple exterior we saw from the street.

Coming up in Locorotondo

Each year on August 15, 16 and 17, there are festivals for the town’s patron saint, St. George Martyr and also for St. Rocco complete with a fireworks competition on the 16th, the winner of which presents their fireworks show on the 17th. I’d love to be in Locorontondo for the festivities sometime!

Moving on from Locorotondo 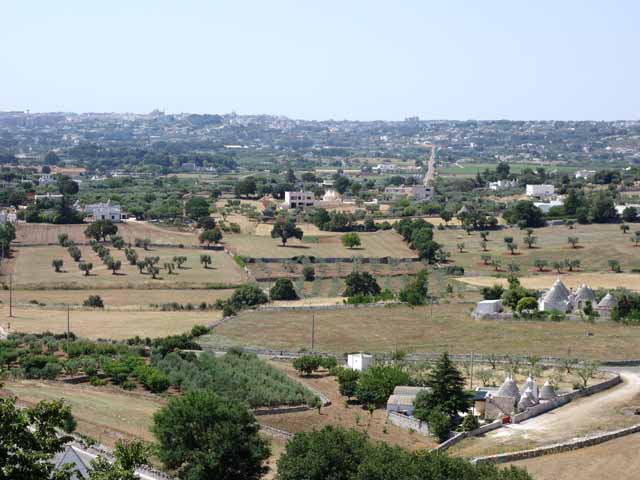 View of the valley and countryside from Locorotondo

Often referred to as “the balcony on the Valle d’Itria” because of its position 410 meters above sea level, Locorotondo offers views of the countryside dotted with the cone-shaped trulli unique to this area of Puglia. This photos was taken from Villa Garibaldi across the street from the entrance to the old town (near the tourist information center).

From Locorotondo, we traveled through the fields, olive groves and sites of ancient settlements you see in the photo to the Cisternino, a town about five miles away in the hills seen in the distance. Later, we also visited Martina Franca and Alberobello, each with their own history and character. We’ll take you along on walks through those towns in future posts.

The closest airports to Locorotondo are Bari-Palese (72km) and Brindisi-Casale (69km)
Locorotondo is 106km from Lecce, 200km from Foggia and 38km from Taranto
If traveling by FSE train, the station is Locorotondo, by Trenitalia the station is Fasano

52 thoughts on “A Walk Around Locorotondo”