A picturesque introduction to Tallinn

We often tell people that a cruise (river or ocean) is a great way to be introduced to new destinations giving you inspiration for a return visit in the future. Such was the case with the ports of call on our Viking Homelands cruise. Five cities on the Baltic captured our hearts very quickly. In particular, we were totally surprised and enchanted by Tallinn, Estonia. 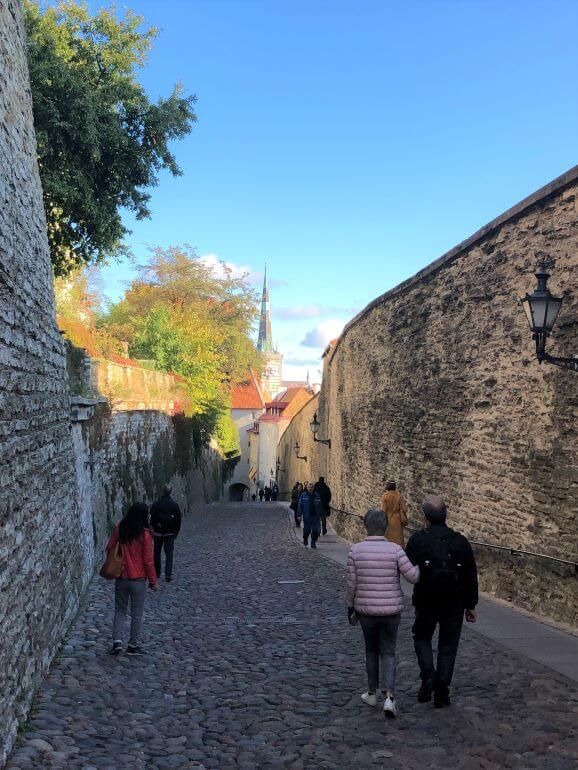 The shore excursions included with the Viking Homelands cruise were exceptionally good (as we’ve consistently found to be the case on Viking’s destination-focused cruises). The local guide was engaging and knowledgeable as she led us to main sites as well as offering personal perspectives and background. Although there were several optional excursions also available on the Homelands cruise — such as seeing the city by bicycle, visiting a chocolate workshop, a tour focused on the life in the Soviet days, and other activities and sites — we opted to take the included 3-hour walking tour of Old Town in the morning and then explore the city on our own for the remainder of the day into early evening. It’s easy to get from the ship to Old Town and back on foot (about 15 – 20 minute walk), but a shuttle bus is also provided by Viking. 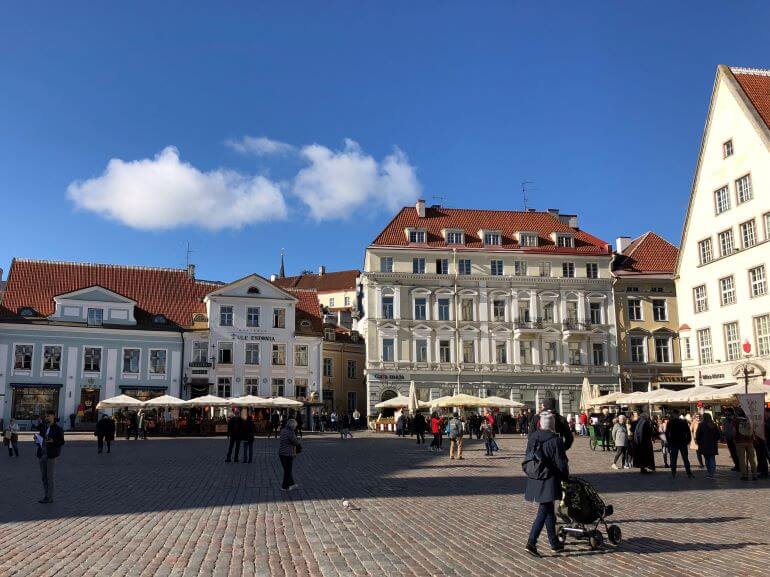 Tallinn’s Old Town has been designated a UNESCO World Heritage Site since 1997.

The Outstanding Universal Value of the Historic Centre (Old Town) of Tallinn is demonstrated in its existence as an outstanding, exceptionally complete and well preserved example of a medieval northern European trading city that retains the salient features of this unique form of economic and social community to a remarkable degree. — UNESCO

Indeed, we sometimes felt that we were taking a step back in time as we walked the narrow cobblestone lanes and strolled the picturesque squares, entranced by the charm and history of Tallinn’s medieval Old Town. Many of the structures have remained intact since the 13th and 14th centuries.

At the entrance to Old Town on Viru Street are the two towers of Viru Gate. It is a striking symbol of Tallinn, setting the stage for the medieval ambiance and architecture to be enjoyed beyond it in the Old Town. 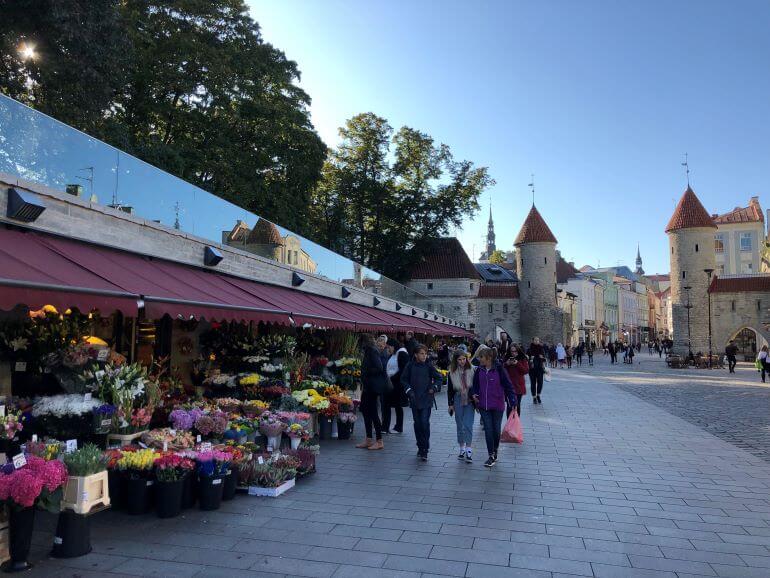 Flower market at the entrance of Viru Gate

Town Hall Square and the winding lanes surrounding it offer many shopping and dining opportunities. It’s also a joy just to have a seat at a cafe and watch the bustle of activity, perhaps imagining medieval times. I can also imagine being here for the Tallinn Christmas market. 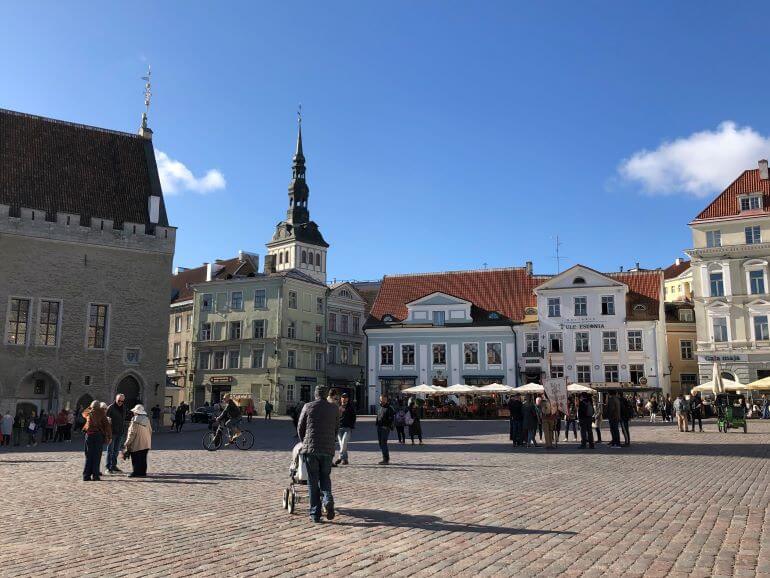 Town Hall Square (a portion of City Hall on the left)

First opened in 1422, the Town Council’s Apothecary is one of the oldest still-operating pharmacies in Europe. In the middle ages, potions and other medieval remedies were sold here as well as everyday items. As interesting as it was to see some old artifacts in the store’s museum, I especially enjoyed the view through the window (shown below) of the Town Hall Square. 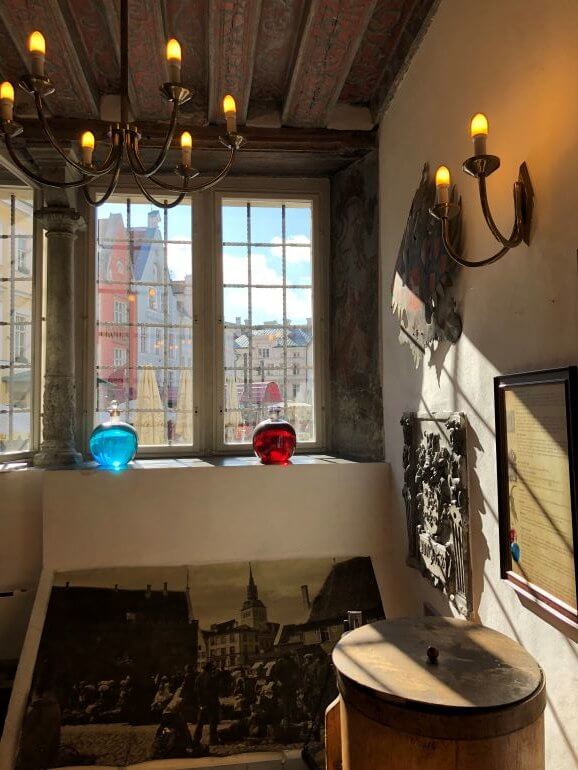 Atop Toompea Hill is Toompea Castle. The building has been in use since the 9th century and is now home to the Estonian parliament. 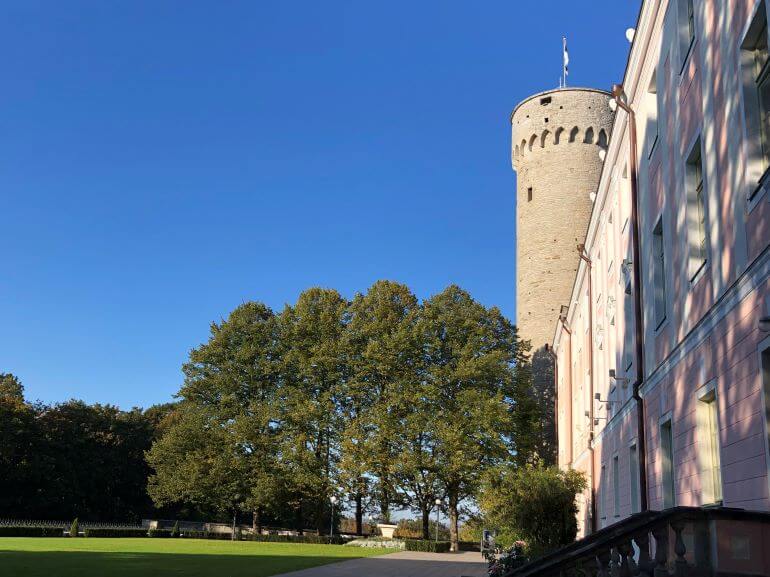 There are more than 20 churches in Tallinn, most of them located in Old Town. These are just two whose spires are a beautiful part of the Tallinn skyline. 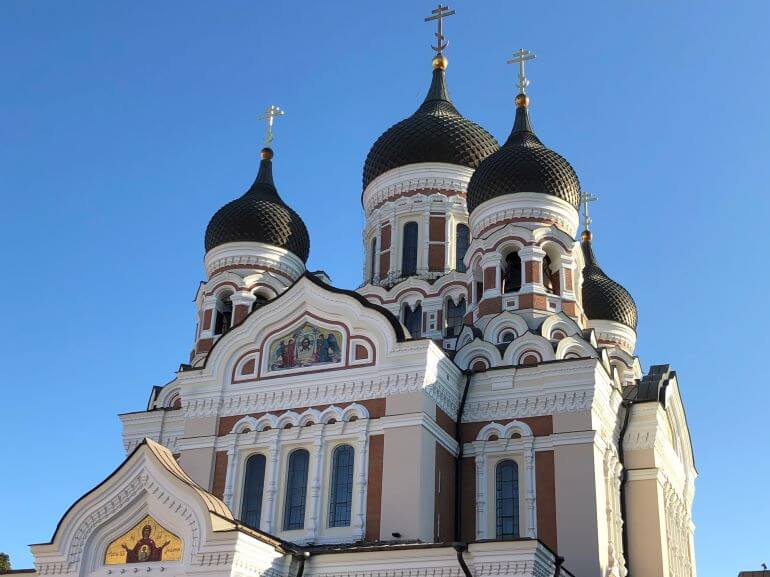 The Alexander Nevsky Cathedral is an orthodox cathedral built between 1894 and 1900 in Russian Revival style . The onion-domed church is named for Saint Alexander Nevsky who in 1242 won the Battle of the Ice on Lake Peipus in Estonia. The church was restored in 1991 after many years of decline during the Soviet era. 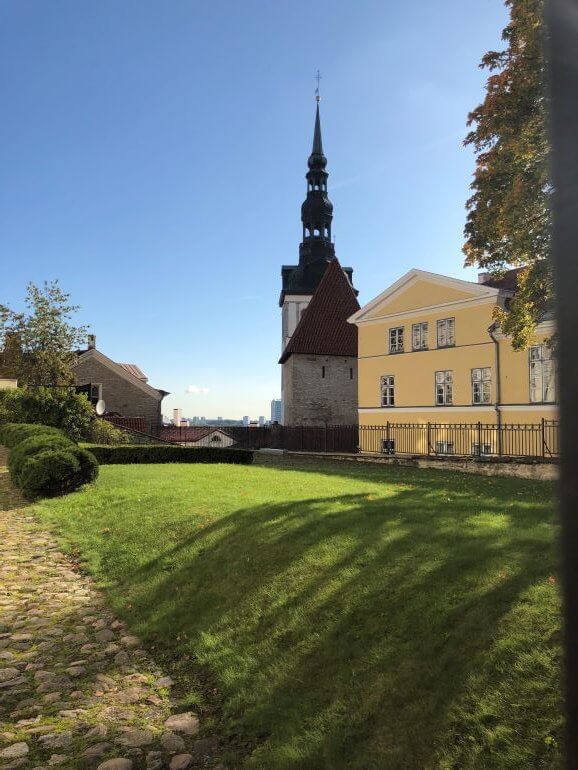 St. Nicholas’s is a former church built in the 13th century. Restored after Soviet bombing in World War II, it is now a branch of the Art Museum of Estonia showcasing mainly ecclesiastical art.

There is a legend about the Danish King’s Garden that says a flag came down from the sky to this place during the Danish invasion of 1219, changing the course of the battle to favor the Danes who rules Northern Estonia, including Tallinn) for over a century. At the garden is Kiek in de Kök a 15th-century defensive tower (shown below) that is now part of a museum. 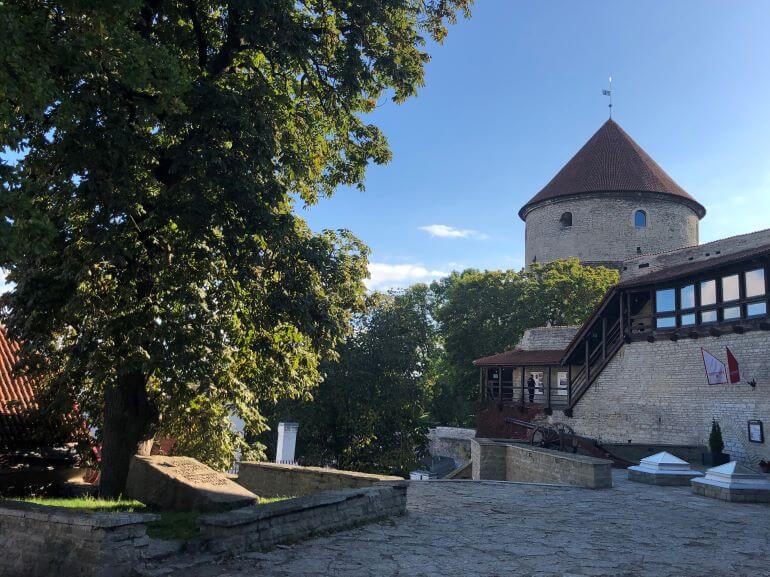 Look for the three curious statues of monks in Danish King’s Garden. The one in the photo below seems to be spying upon those going through the gate. 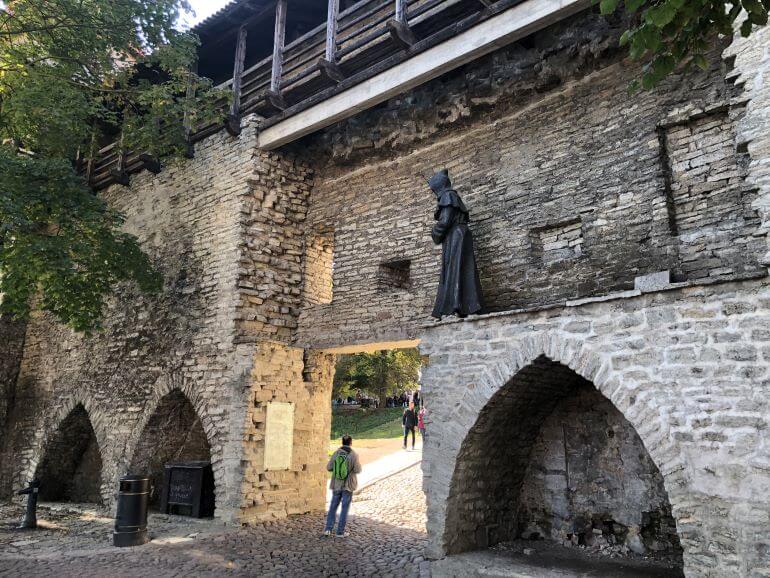 There are several great spots to catch sunsets and panoramic views over the rooftops of Old Town and Tallinn Bay from the Patkuli, Piiskopi, and Kohtuotsa viewing platforms and other high pointsof Tallinn’s upper town. 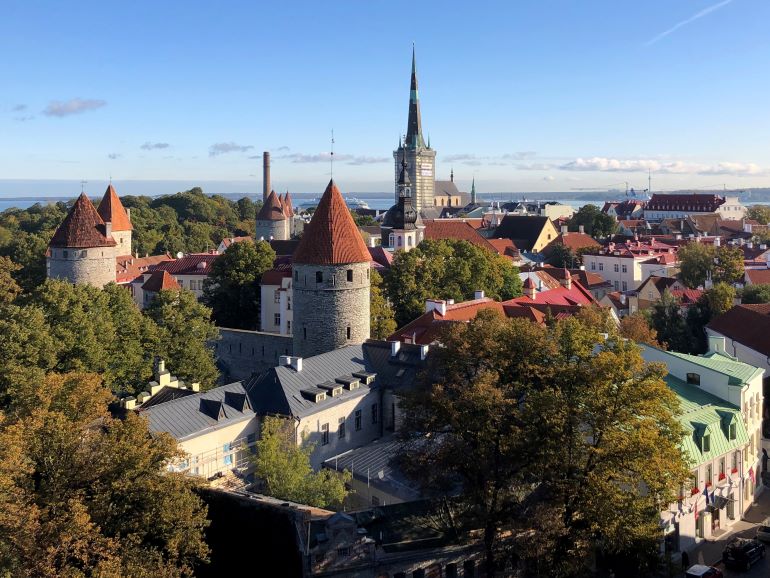 View of Town wall and towers

The Kohtuotsa viewing platform on Toompea Hill provides sweeping vistas over the rooftops of Old Town to Tallinn port and beyond. 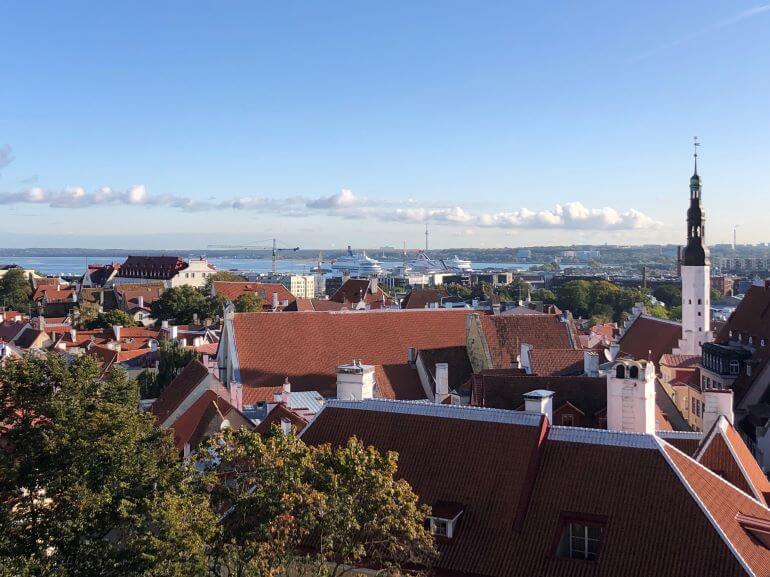 Port of Tallinn in the distance

Strolling the streets of Old Town, we browsed the shops, galleries, and craft markets. Typical handmade products included linens, woolen sweaters, ceramics, wooden utensils, and jewelry. We found most items on display to be of high quality and there was also strong focus on eco-friendly products in several of the shops. Our souvenir from Tallinn is a juniper wood trivet, something small and light that fit with our traveling light philosophy. 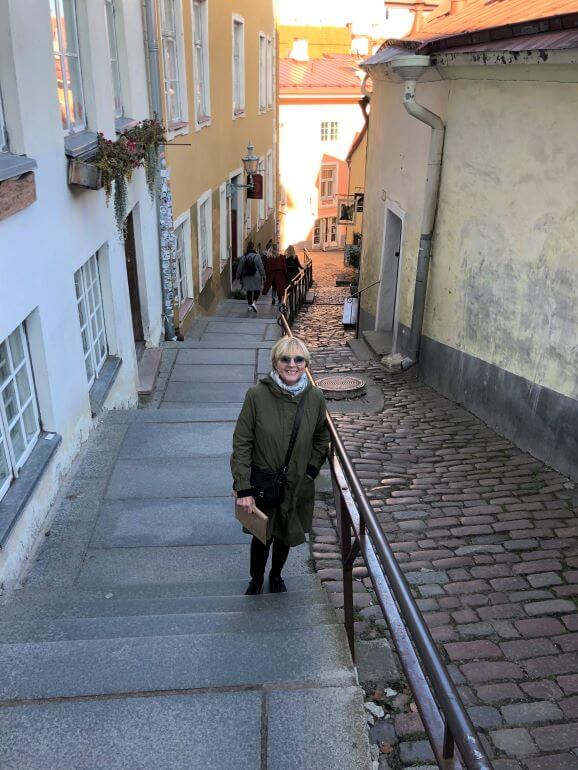 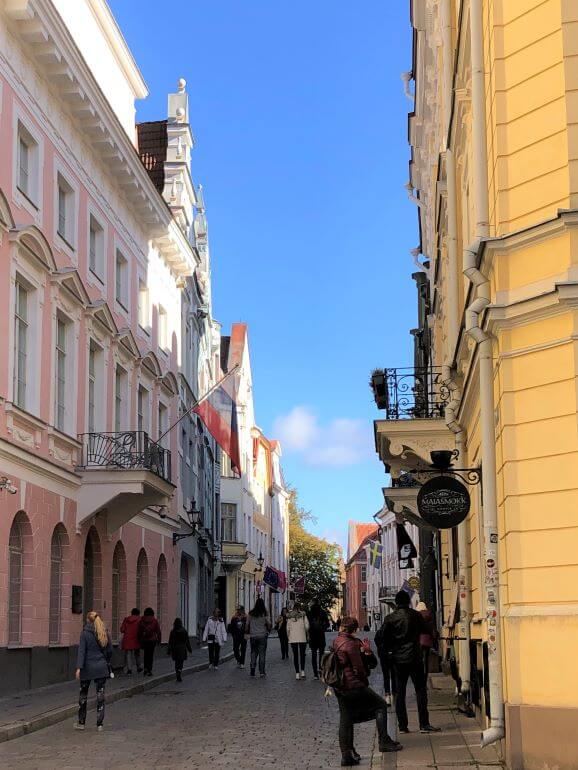 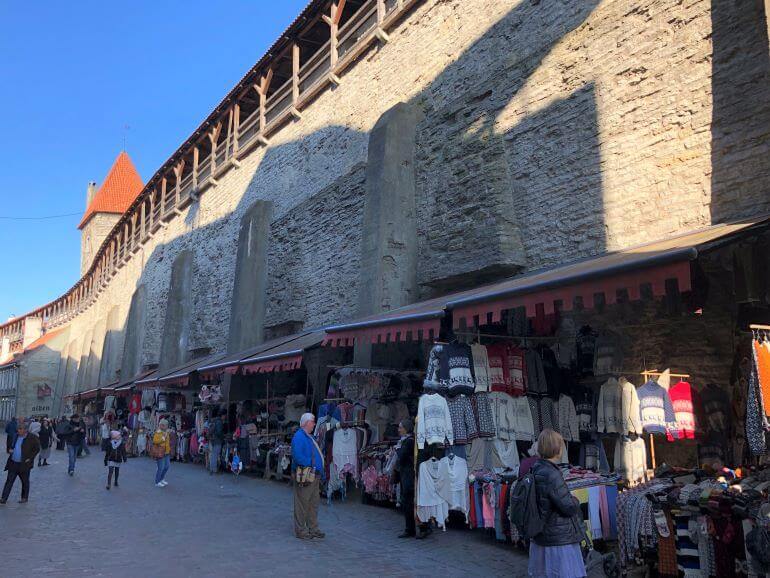 There’s also a thriving contemporary side to Tallinn and its culinary and café scene are part of that. 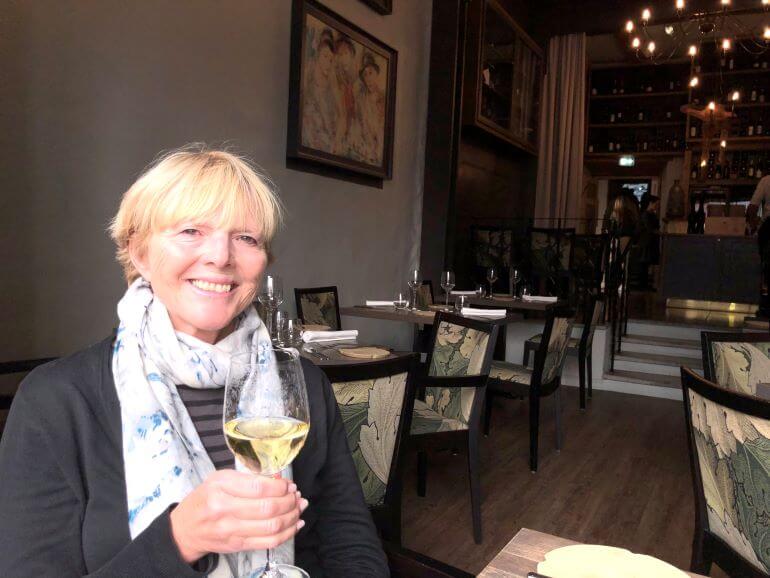 After a morning of sightseeing, we wandered down a few streets leading from Town Hall Square looking for the right place for lunch. We found it at Cru Restaurant with its creative and delicious dishes and cozy, yet elegant decor in a 15th century building. We learned that head chef Dmitri Haljukov took 14th place in a major culinary championship for chefs, the Bocuse d’Or in Lyon in 2015.

For an afternoon break, we enjoyed coffee at Reval Café Vene on Vene Street in Old Town. It’s one of the local Reval chain’s 16 cafes in Tallinn. By the way, “Reval” was the name given to the city upon Danish conquest in 1219. The cafe was perfect for a little relaxation before exploring more of the Old Town on foot. 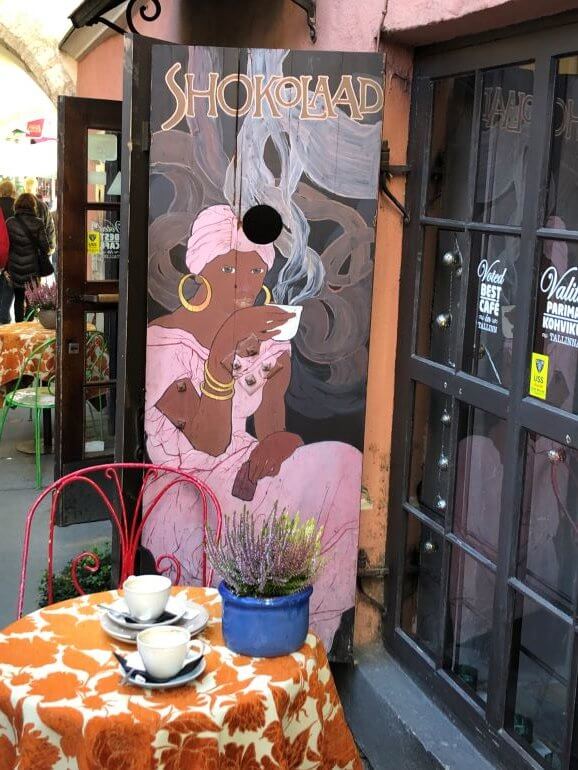 A chocolate cafe in Old Town

If you have a sweet tooth, Tallinn will make you happy. There is definitely a sweets culture here with are plenty of bakeries and chocolate cafes. In fact, chocolate has been made in Estonia since the 18th century and before that there was marzipan. It’s said that marzipan was invented here (initially as a medicine sold by the pharmacy), but there is quite a dispute about that. I remember visiting Lübeck, Germany several years ago and enjoying this honey and almond confection in what was said was its birthplace. However, many accounts I’ve seen support the belief that the origin of marzipan goes back to Persia in the 1200s. It’s all very confusing, so just enjoy tasting and don’t worry about who invented it.

KGB Museum — During Soviet rule until 1991, Hotel Viru (near Old Town) had a secret KGB operation on the 23rd (top floor) monitoring the listening devices in the hotel’s guest rooms. When the KGB abandoned the hotel in 1991, they left much of the equipment and other objects behind. Sixty of the rooms were pre-wired for surveillance and all rooms could have bugging devices installed. The museum opened in the hotel in 2011. I really loved the Spy Museum in Washington, DC and have a feeling this would be right up my alley. 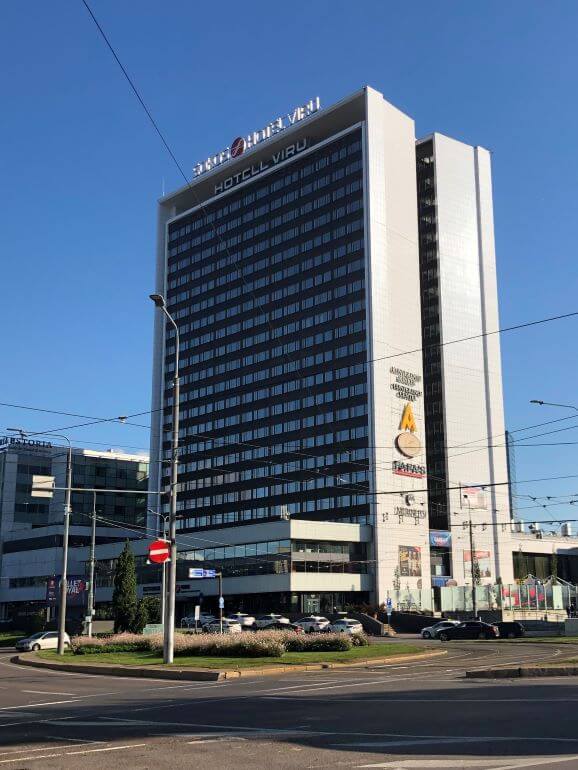 Freedom Square — I’m actually not sure how we missed this when we were walking around. Freedom Square is at the edge of Old Town and represents national and civic pride with history going back to the tsars. It’s now a popular meeting place and venue for  concerts.

Embrace nature — There’s so much green in this city. There are lovely parks throughout Tallinn and next time we’d like to relax a bit at Harju Hill Park (Harjumägi), Tammsaare Park, Toom Park, and Deer Park (Hirvepark). Tallinn also has a botanical garden located a few miles outside of the city. 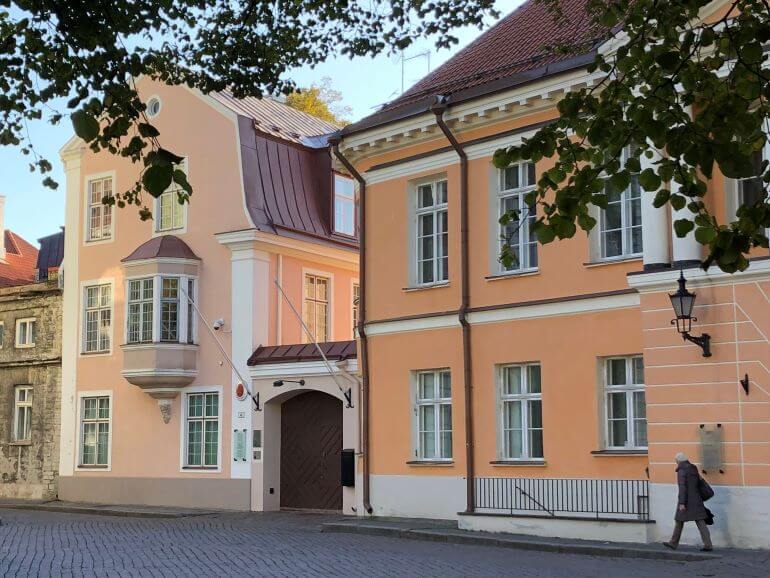 I’m sure there’s much more to add to that list. For now, I hope this has given you an introduction to the highlights of Tallinn.

Thanks to Viking Ocean Cruises for hosting our Baltic experience and tour of Tallinn. 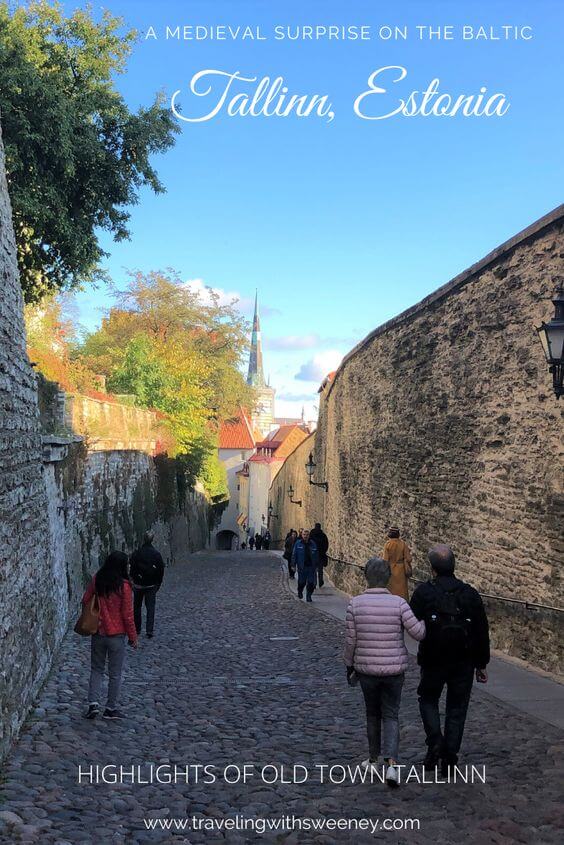 13 thoughts on “Tallinn on the Baltic: A Medieval Surprise”