It’s been a while since I posted a mystery photo challenge on my blog. So when I came across this photo, I decided to have a little fun with it.

Do you know the name and location of the place shown here? 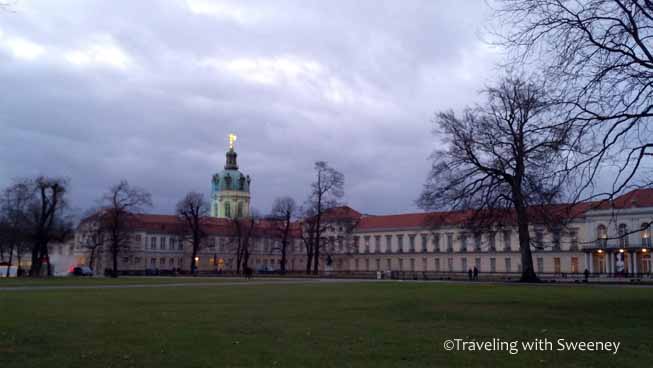 Where in the world am I?

Congratulations to Laurence Norah and Kevin Dincher who correctly identified the location of this mystery photo challenge as being Charlottenburg Palace in Berlin, Germany.

Laurence Norah is a full-time traveler who has been exploring the world since 2009. His blog is Finding the Universe. You can also follow him on Twitter, Facebook and Google+.

Thanks to all who participated and followed along!

Clue #1: The original section of this building was constructed in the late 17th century, with considerable expansion taking place over the next 100 years.

Clue #2: The building was reconstructed after being largely destroyed during World War II. The building and grounds are a major tourist attraction.

Clue #3: In recent years, a very popular Christmas Market has been set in front of this place.

Leave your answer in the comments section below by Monday, January 23rd at noon Pacific Time. You can leave new guesses after each new clue. One person will be randomly selected from those who answer correctly and announced on this blog post, Twitter, Facebook and Google Plus with links their blog and social media sites.

Please note: Comment moderation is turned on so that your answers are kept secret until everyone’s comments are in.

8 thoughts on “Where in the World Am I?”