We’ve got a winner! This was a tough photo quiz, but Charles McCool of McCool Travel correctly identifed the building in the photo above as The Rookery Chicago. Congratulations, Charles! 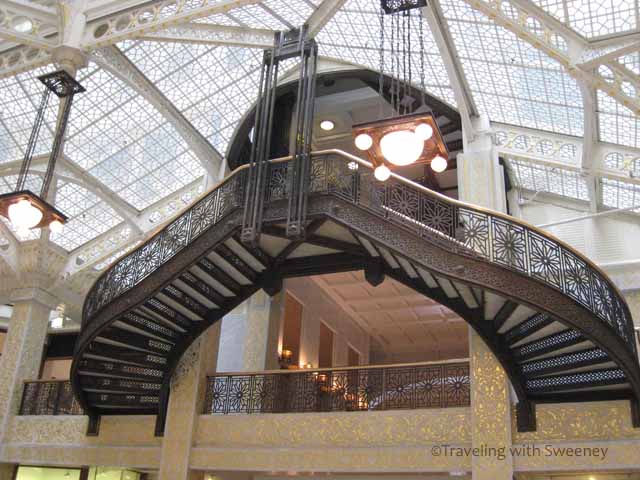 Charles is a travel expert who has taught others how to travel more effectively and have more fun since 1992. He has traveled to all 50 states in the USA and to five continents. He shares his knowledge and tips on his website  and on Facebook . You can also follow him on Twitter!

I also want to give an honorable mention to Jeremy Branham of Budget Travel Adventures, who correctly guessed that the building was in Chicago!

Here’s more information about The Rookery. Construction on this building, designed by Daniel Burnham and John Root, was completed in 1888. In 1905, Frank Lloyd Wright was commissioned to redesign the lobbies and light court. (That’s what was in common with one of my recent blog posts. In Wright Angles, I wrote about Unity Temple which was designed by Wright.)

The Rookery was 11 stories when it was built, but a 12 floor was added in 1988. It is considered the oldest standing skyscraper in Chicago. About the name — City Hall used to be located on this site. According the The Rookery Building website, some claim the name  “…originated with the crows that lived in the previous structure’s walls, paralleling the politicians who roosted there each day. It is also said that an adjacent fire station attracted scores of pigeons to the site to feed on the horses’ oats.”

Original post below:
This is my entry for the Budget Travel Adventures Wednesday series “Where in the world am I?” Do you have any ideas about the place in the photo above? The person who is first to identify it will be announced in this blog post and on the Traveling with Sweeney Facebook page with links to their website, Facebook page and Twitter account if they have them!

In the photo, you’re looking at the second level and glass ceiling of a two-story lobby and light court in a building in a major city. There are shops on both levels and offices on the floors above. It was built in the late 19th century, but the lobby was redesigned in the early 20th century and has had further work over the years. The building is the oldest remaining skyscraper in the city. It’s believed that the name of this building has something to do with a city government building that was previously on the site.

One more clue! This place has something in common with one of my recent blog posts.

So, what do you think? Do you know where in the world I was when I took this photo? Please leave your answers in the comments below.

Please note: Comment moderation is turned on so that your answers are kept secret until everyone’s comments are in.

18 thoughts on “Where in the World Am I? The Rookery Chicago!”