Camping in the Arctic Circle may not have been top of your list of winter breaks this year. In fact, camping and the word ‘snow’ are not often found in the same sentence together. That is, until campsites in Scandinavian countries like Norway, Finland and Sweden begin to open in wintertime and a few enterprising tour companies decided to offer a range of glamping breaks in the snow-dusted pine forests and frozen plains.

So before you dismiss the idea as sheer madness, take up the challenge and take a look at these surprisingly luxurious ideas for camping in the wilds of Lapland.

Deep in the Finnish forests

For many, snowy northern Finland, with its Santa Claus village at Rovaniemi, offers definitive Lapland breaks, though the cultural region stretches across the top of neighbouring Sweden, Norway and parts of Russia. Indeed, you’d be hard-pressed not to find the magic on a glamping trip around the beautiful Lake Inari, hanging out with the locals at a reindeer farm and skiing amongst the boughs of the Taiga Forest. Ok, so current 7-night offerings include hotel stays for part of the trip but the open-air ‘Aurora Camp’ on the lake itself, involves open-air cuisine and the chance to pick up some native survival skills.

Further south in the Urho National Park, you can even sleep the night snugly in a real igloo or go for the slightly more contemporary glass version, observing the shifting night sky from the comfort of your sleeping bag. 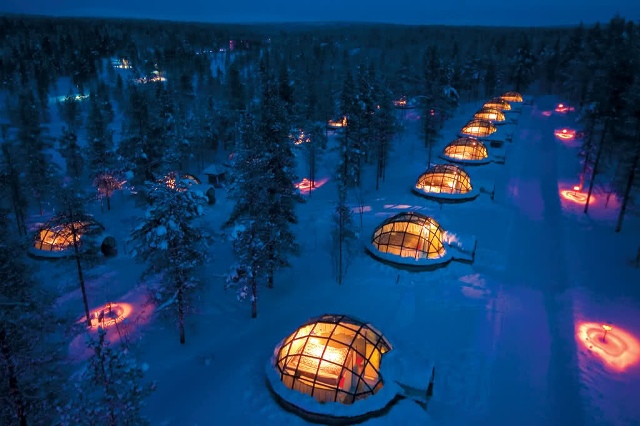 Getting out into the wilderness takes on a new meaning with safari-style winter glamping in Swedish Lapland. One tour operator in the north lakelands near Boden is offering the chance to sleep beneath the stars – and even the Northern Lights, all being well – in authentic Sami tents known as Lavvus. Those used to warmer climes will be relieved to hear these rustic teepees are heated by stove fire, but the tour limits the camping to one night only, after which it’s on to a more robust lakeside lodge. Activities include everything from ice-fishing to dining with the Sami tribespeople themselves.

Plenty of other options are available in Swedish Lapland, including venturing along the Kings Trail with your very own pack of husky dogs. Even in the remotest parts of the mountains, you’re never far from a handy cabin, most of which come with wood-fired saunas for some pampering at the end of the long days. 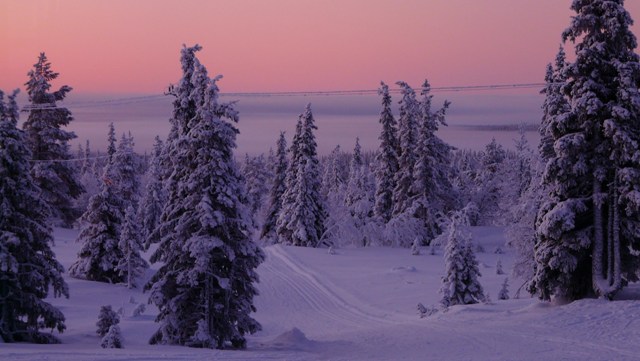 Ski track at Pallastunturi – By Simo Räsänen via Wikimedia Commons

In search of Norwegian nature

Camping holidays in Norway’s most northerly regions are a world-class experience, owing to UNESCO-nominated destinations such as the Lofoten Isles, a classically Norwegian collection of bright blue fjords and towering summits. It’s because of these photogenic sights that one holiday company has started running photography-themed camping breaks, with the opportunity to learn your skills with the lens in the company of sea eagles and orcas. Then of course, there are those Northern Lights to capture as the deep, dark evening closes in.

Up for some really intrepid camping? Take your own tent, pack your skis and stay in the mighty Lyngen Alps region. If the idea of being surrounded by nothing but glaciers and the rushing sounds from the river appeals to you, it’s perfect; just make sure you’re no closer than 150 metres to the next dwelling and you’re free to pitch wherever you like. If you’d rather bunk in a snug cabin, there are plenty to choose from in towns like Lyngseidet and Koppangen.

So next time you’re considering the same old winter sun destination, embrace the cold weather and try a bit of luxury exploration. Swap the sand for some proper snow, your villa for a cosy tepee and those crowded beaches for some awe-inspiring wilderness and you’ll never laugh at the thought of snow-camping again.

Author Rosie Dunlop writes about her travels in between running an online retail company from wherever she happens to open her laptop. She’s currently embarking on a tour of Northern Europe for the winter.

5 thoughts on “Camping in the Snow: Winter adventures in Lapland”