Highlights of Our European Christmas Markets 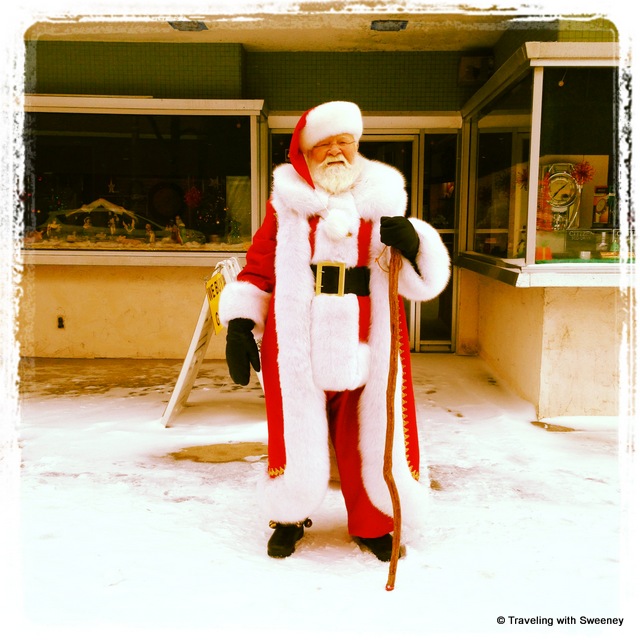 As I write this post, I’m with family in northern Wisconsin in a small town along the border of the Upper Peninsula of Michigan — Marinette. Yesterday, I came across Santa Claus (possibly the real Santa?) on Main Street. He couldn’t tell me any details, but said that he’d be headed overseas today.

Before arriving in Marinette, Mr. TWS and I continued our tradition over the past several years of being in Europe to kick off the holiday season. As soon as the Christmas holidays ended last year, I was already thinking about getting back to Europe to enjoy the Christmas markets and spirit in 2013. For the past several years, we’ve been lucky enough to travel in Europe during the month of December and it’s a tradition I’d like to keep for years to come.

Join me for some highlights of our 2013 Christmas markets tour.

Our recent trip to Hungary, Slovakia and the Czech Republic wasn’t all about Christmas and there will be posts coming about the places we stayed, sites, attractions and food that are most memorable. But for now, here are some highlights that reflect the mood, lights, and festivities that added to the Christmas spirit. 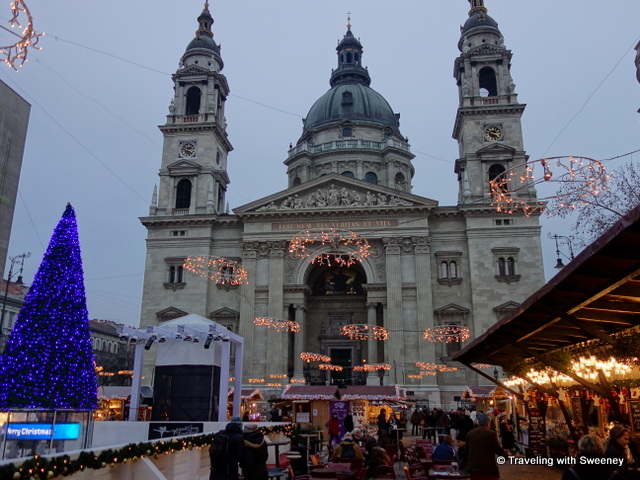 When we visited Budapest in March of this year, I left determined that I’d return to see more of this city that has become one of my favorite places in Europe. I didn’t expect that I’d be able to come back so quickly, but grabbed the opportunity with gusto. Not only would I get to see more of the city, I was thrilled to be able to see it at Christmas with its famous Christmas markets. 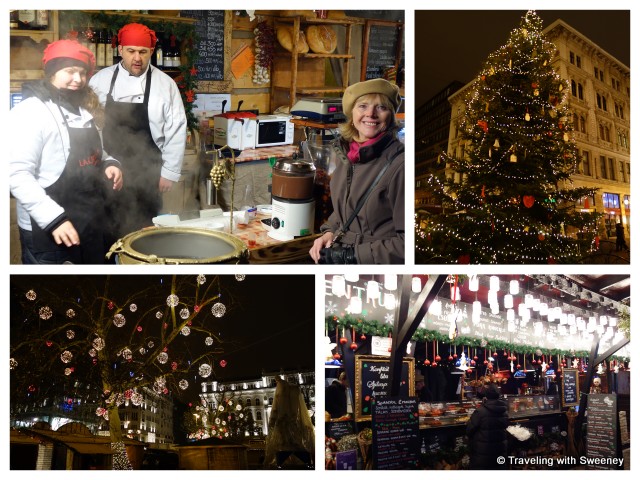 The two main Christmas markets were at key locations in Budapest and were only a few short blocks from our hotel, the Four Seasons Gresham Palace. The first was smaller, but in a beautiful location at the square in front of St. Stephen’s Basilica with an inviting ice rink in the center. Here we sampled our first hot wine (“forralt bor” in Hungarian) of the year while browsing the local crafts and food booths. Later at the larger market in Vörösmarty Square we indulged in the first of several chimney cakes (“kürtőskalács“) we would taste during our Christmas market tour and had a chance to see a stage performance of traditional Hungarian folk songs.

For a nice side trip from Budapest, we spent a few hours in Szentendre, a small village less than one hour away from the city on the HEV train. Although it might be considered very touristy in the summer, it was quite pleasant and uncrowded when we were there and had a charming town center and Christmas market. 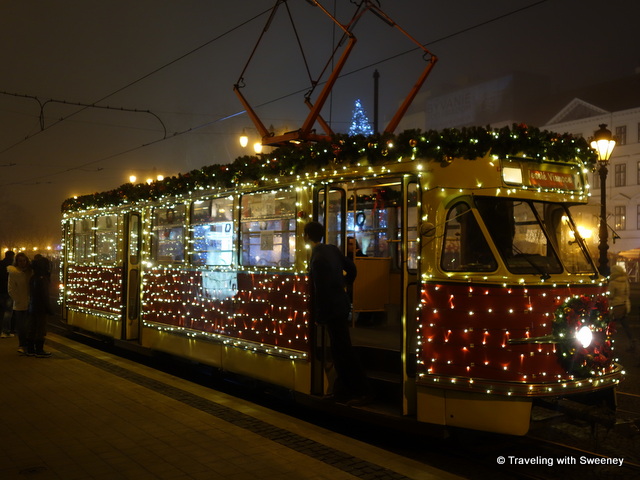 This was our first time in Slovakia. It was right on our train route from Budapest to Prague, so it seemed a good opportunity to get a glimpse of a city that had been on our radar, but not in our travel plans until now. The markets there on Hviezdoslavovo Square in Old Town were bustling with locals, but less crowded than other markets we’d seen. A pork sausage sandwich and hot wine were on my agenda, but I was surprised to find that several booths also served regular wine, which was a nice break from the sugar of the spiced wines. 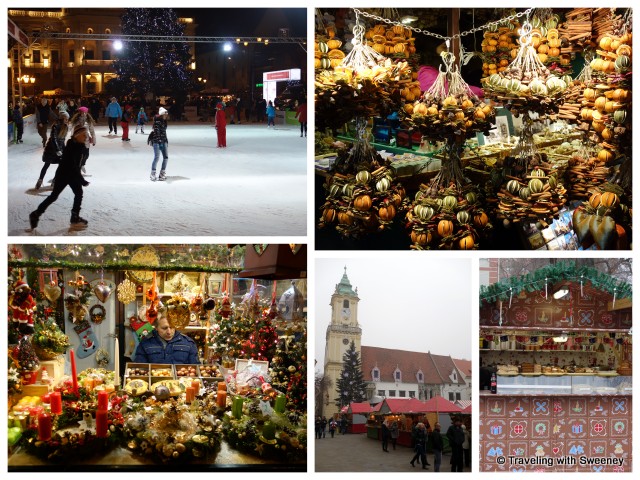 It was only by accident the following day that we came across the market on Main Square just a few blocks away as we darted around the city taking in a few attractions. If we should get back to Bratislava during the holidays again, we’d love to try this one which we felt exuded even more charm in its quaint surroundings than the larger, more commercialized one.

Veselé Vánoce from the Czech Republic! 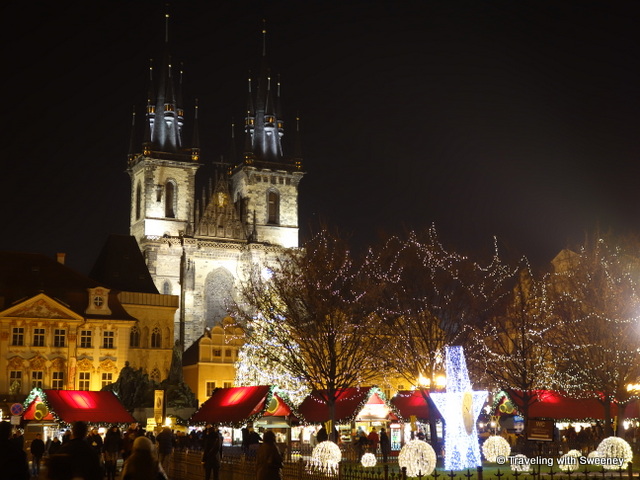 This wasn’t our first time in Prague at Christmas. We were there in 2011 and felt the magic of the market at Old Town Square so much that it’s been our hope to relive the experience. Prague is a gem with its amazing architecture and prevalent spires and the Christmas markets just add to the fairytale mood.

One of the many things we like about Christmas markets is that they are typically located at picturesque sites in the cities. This one in Old Town was surrounded by prominent and beautiful buildings of Baroque and Gothic design. Horse-drawn carriages and carol singers added to the ambiance. 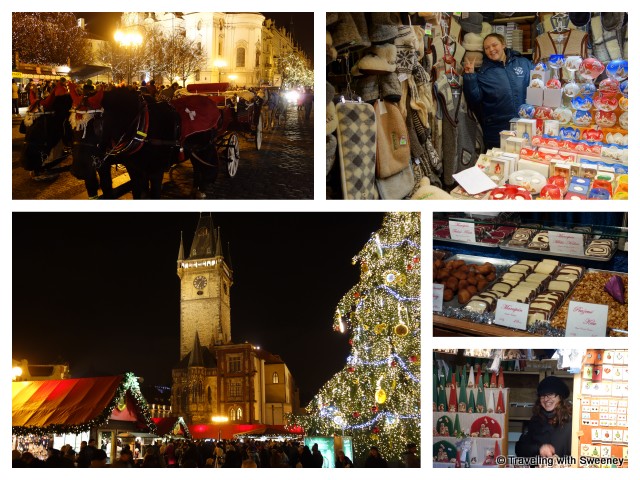 The second market was at Wenceslas Square, a wide street lined with old buildings housing shops and restaurants with the National Museum at the far end. Although the backdrop wasn’t as spectacular as that in Old Town Square, the Christmas trees and decorations definitely generated the Christmas spirit. It was also here that we found our favorite hot wine of the Christmas market tour — one that wasn’t quite as sweet as the others. 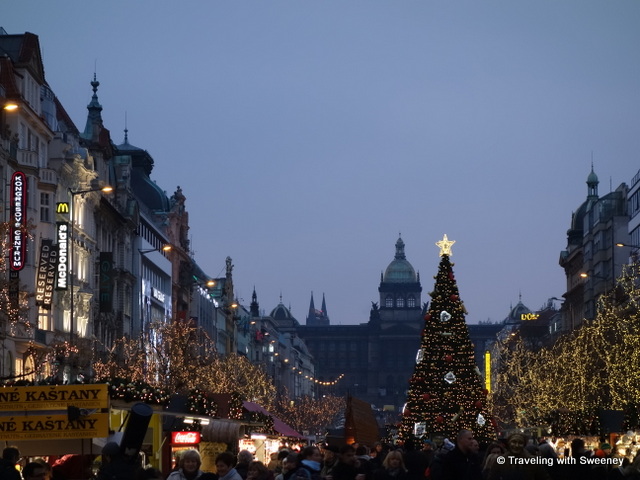 So now I’m wondering… where shall we kick off the holiday season next year? Suggestions?

Mr. TWS and I wish you all a very merry Christmas!