To celebrate the holidays and ring in the new year with song, Mr. TWS wanted to share a few videos from Budapest and Prague during our 2013 European Christmas markets tour. Enjoy!

There were so many things that made our 2013 Christmas markets tour memorable – visiting 3 cities in 3 countries in Europe (Hungary, Slovakia, and the Czech Republic) just before Christmas, sharing the spirit of the season with friends and family in Wisconsin and Chicago, and visiting a snowy, Christmas-decorated Milwaukee, where Sweeney and I first met. 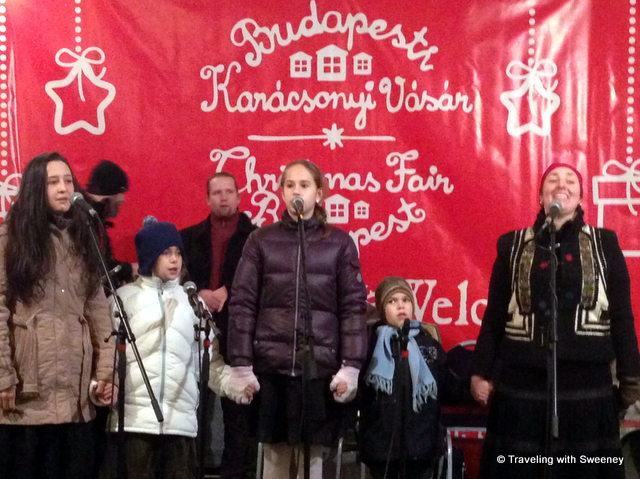 Songs from Budapest and Prague

The Christmas markets in Europe have become an annual tradition for TWS. My favorite thing about them is catching live performances by local groups, especially children, putting on performances on the small stages. There may be plays and skits but it is the singing of carols I enjoy the most, particularly if they are traditional carols of the region sung in the native language. We had such experiences at Christmas markets in Budapest and Prague this year. I’ll start with the Budapest one because it was an especially touching moment.

We were attending the larger of the two main Christmas markets on the Pest side of the Danube in Budapest. As we approached the small stage we could see that there were performers singing and a small audience gathered. It appeared to be a mother and her 3 children aged about 7, 10 and 14. The mother was very exuberant and happy and all of their voices were delightful. When they finished the song I turned to a gentleman near us and asked if he spoke English. Then I asked if it was a Hungarian Christmas carol they were singing. He replied that it was Hungarian but not a carol, but rather a folk song. He continued to say, “But it is very special because it is Romanian, Romanian Hungarian; they are Hungarians from Romania and it is very special; very important.” The crowd was very enthusiastic in response to the performance.

This was one of my favorite Christmas moments of 2013. We were able to appreciate a native carol in the native language. It was even better because it involved a family singing together and better yet because of the significance of the singers being Romanian Hungarians and the fact that it was so important to the local Hungarians exemplified by the gentleman’s comments and the enthusiasm of the audience. It was also fun to make a connection with the man next to me and special because of the kind way with which he interacted with me and his pride and excitement in talking about the singers.

One of the things we enjoy about travel is the relationship to history. To some extent history can spur the interest in traveling to a certain location, and certainly to see certain sites at a destination. But more travel introduces one to historical aspects associated with locations spurring deeper investigation. Such was the case here. I learned afterward that there is a significant history to the area of Romania, mostly Transylvania, where most of the Hungarians of Romania reside. But the key incident was at the end of World War 1, when the region of Transylvania, formerly part of Hungary, became part of Romania, due to border changes that were part of the treaties including the Versailles Treaty.

After another song, the mother of the group made a short announcement in Hungarian. The nice gentleman next to us informed us that they were going to do several Hungarian carols and it is one of those that I captured in the video below. The children weren’t included in this one,  but it was very lively and got the audience involved. I think you’ll enjoy the enthusiastic singing, especially towards the end.

In Prague, we were also able to enjoy Czech caroling. Though we were at the main Christmas market in Old Town three times partly because of the great location of our hotel, the Four Seasons Prague, it wasn’t until the last night that we were there at the right time to catch the caroling. Usually it is performed by singers that come from other communities (some traveling far to perform) and they often sing wearing costumes or traditional attire of their area. What also made this market special was the stunning location. In all four directions there are Old Town’s beautiful buildings. With the red-roofed market booths and diverse decorations Old Town Square is a perfect Christmas market setting. Hope you enjoy these videos as well.

Holiday greetings and all the best for a very happy new year from Sweeney and me!

30 thoughts on “From Budapest and Prague: Singing in the New Year”