Lisbon was irresistible. I fell in love at first sight.

As much as Mr. TWS and I were excited about taking our first cruise, the fact that the Viking River Cruises “Portugal’s River of Gold” itinerary included a two-day stay in Lisbon prior to ever stepping foot on the ship was one of our favorite things. 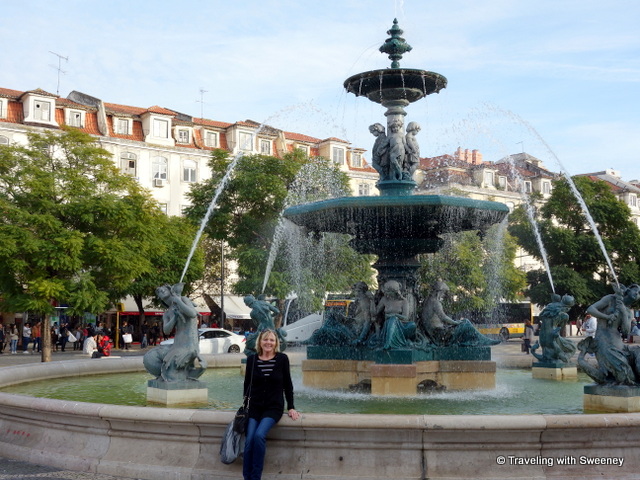 Whether we were exploring on our own or being guided by our expert local Viking guides, I loved being in this city. Let’s take a walk as I share some of our favorite places, sights, and tastes with you in these photos. 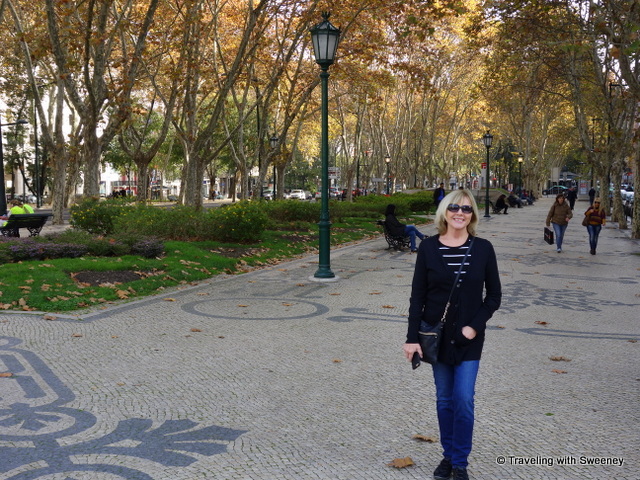 A walk on the tree-lined pedestrian walkway of the Avenida

We stayed for two nights at the Hotel Tivoli in a room overlooking the treetops on the wide boulevard below, Avenida da Liberdade (Liberty Avenue), simply called “Avenida” by locals. Whether passing designer shops such as Chanel, Versace, and Prada or strolling down the Avenida to Rossio Square and the waterfront, we enjoyed the center pedestrian walkway with its gardens, monuments, and small kiosk cafes. The beautifully designed pavement is made with the typical cut stones seen throughout Lisbon. 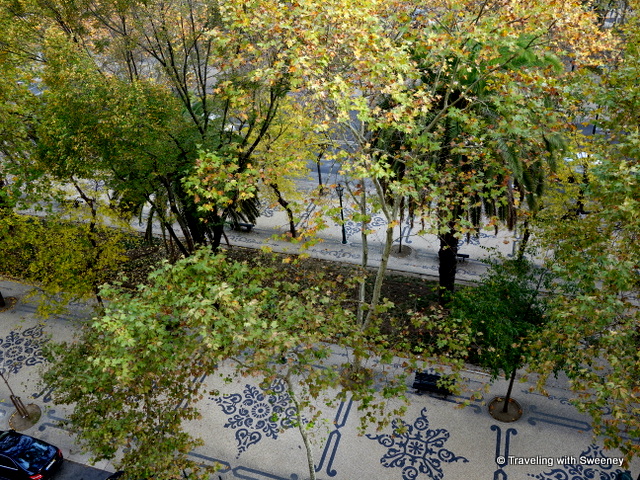 Baixa (meaing “low” because it is situated between the hills of the city) is the main downtown business and shopping district of Lisbon, consisting of the area south of the Avenida to the Tagus River, including these places that we enjoyed.

Surrounded by restaurants and shops, Praça Dom Pedro IV, commonly known as Rossio Square, is the main square of the city and one of its transportation hubs. It was bustling whenever we were there. 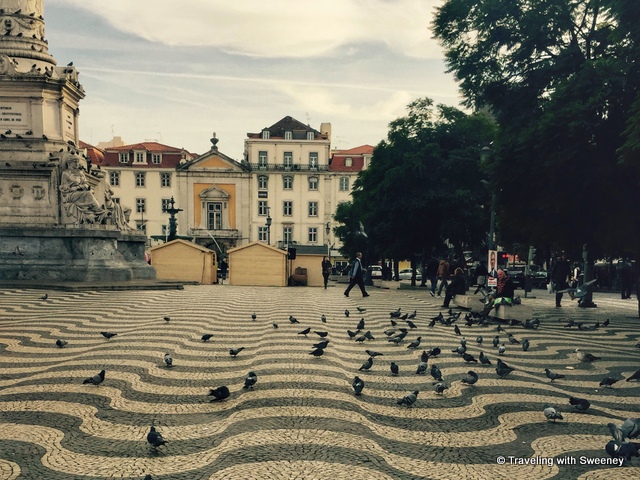 I loved spending time there, whether admiring the fountains, people watching, or just passing through. We were especially delighted on our first evening that we were at Rossio Square just in time for the Christmas markets, complete with Santa Claus and hot mulled wine. The wavy-patterned pavement as seen in the photo above was mesmerizing.

From Rossio Square, there are several streets that run south to the waterfront. At the end of Rua Augusta is Arco da Rua Augusta, an imposing arch that opens to Praça do Comércio (Commercial Plaza), a large open plaza on the riverfront. 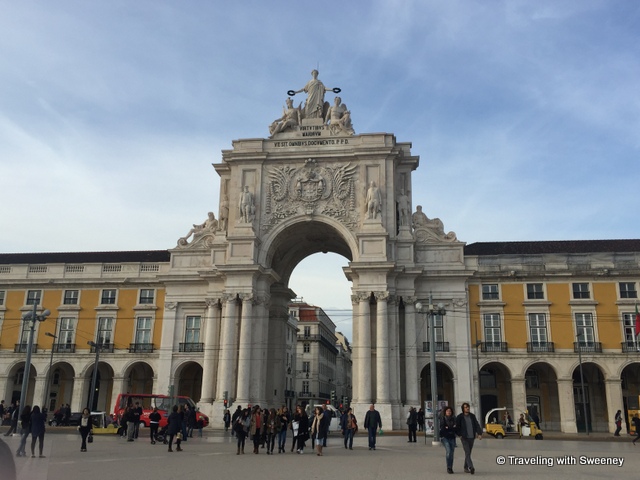 Besides being a focal point for events, festivities, shopping, and dining, the plaza has a long history of revolutions, assassinations, and executions. After Lisbon’s devastating earthquake of 1755, during which the Ribeira Palace, the primary residence of the king of Portugal for the prior two centuries was destroyed, Praça do Comércio was built on the same site, and it became a significant focus for the reconstruction.

The area along the Tagus River waterfront is a vibrant part of Lisbon with many sightseeing vantage points.  There are restaurants, museums, and other points of interest, and it is a very popular night spot for locals and tourists, including one section where the establishments open at midnight and stay open the rest of the night. 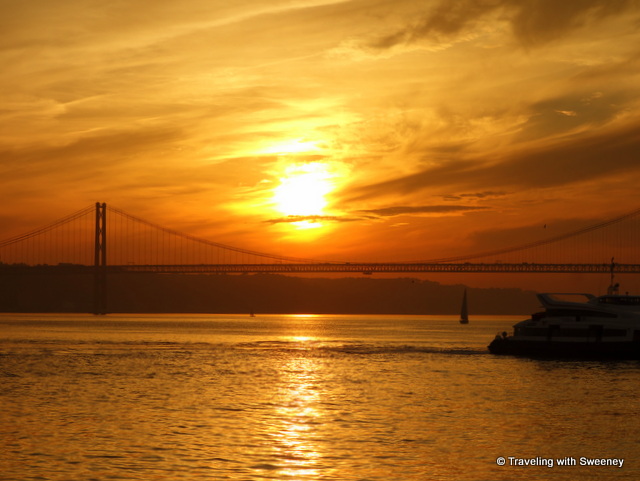 A very special time on our first day was walking along the waterfront and sitting on the terrace of a cafe to watch the sunset. Making the scene particularly dramatic is the Pont 25 de Abril, the long suspension bridge over the Tagus which is reminiscent of San Francisco’s Golden Gate Bridge. Built in 1966, it was designed by the same company that built the San Francisco – Oakland Bay Bridge (not the Golden Gate). There were many other similarities to San Francisco, such as the steep hills, colorful buildings, fog, and a famous earthquake. 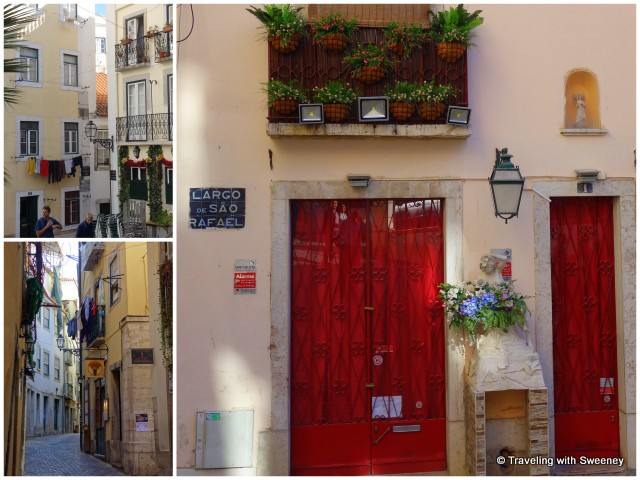 Narrow lanes and colorful scenes of the Alfama historic district

Led by our enthusiastic and informed guide Ana, we walked narrow streets of the Alfama, Lisbon’s historic old town, that wind up to the top and the Castelo de São Jorge. The castle, in view from many vantages in the city, overlooks the Alfama on one side with vistas of the Tagus and the hills of the Bairro Alto district (see below) on the other. Alfama is the only area of Lisbon that survived the 1755 earthquake, so you get a feeling of stepping back further into the past when you walk its medieval streets. At the time of the Moor occupation of Lisbon during the 8th century, the entirety of Lisbon was what is now Alfama. The district is also known for many restaurants and bars featuring fado, the traditional music of Portugal. 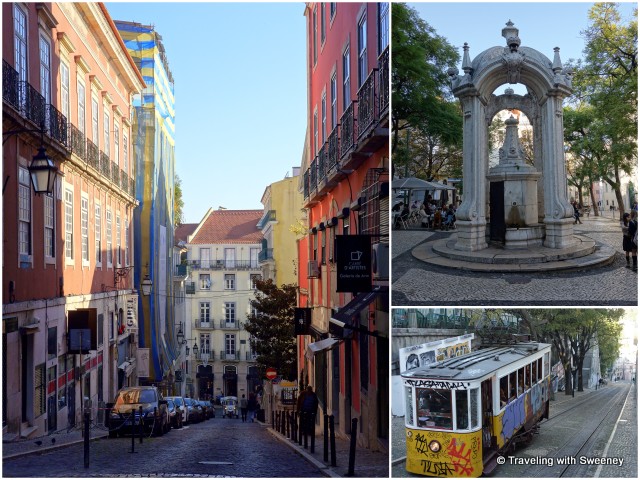 From left: A steep street leading to Bairro Alto; monument on Largo do Carmo; an iconic Lisbon tram

Our time in the Bairro Alto (high neighborhood) district was a serendipitous part of our Lisbon experience as we were just walking and exploring with nothing more than a general concept as we made our way up the hill, winding along several steep streets with busy shops before reaching it. A popular way to reach the top is by the Elevador de Santa Justa, an ornate elevator designed by Raoul Mésnier du Ponsard, an apprentice of Gustav Eiffel. The elevator was under significant construction, so we opted for the walk and, as usual, getting there was part of the fun and also well-needed exercise.

One of my favorite spots we found at the top was Praça Carmo, a lovely plaza surrounded by restaurants and the Carmo Convent and Church, a Gothic structure partially destroyed in the 1755 earthquake that currently houses an archeological museum. As we had lunch at Carmo Restaurant, we sat by a large open window with a perfect view of the square which was bustling with activity. 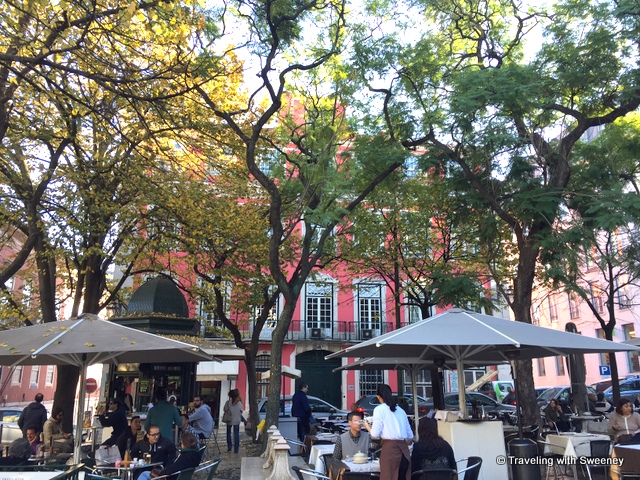 Pleasant view of Praça Carmo from our table at Carmo Restaurant

We walked further north from the square through charming areas before stopping to spend time at Miradouro de Sao Pedro de Alcantara (a park and vista point). From here, we got panoramic views over the rooftops of Lisbon to the the castle on the opposite hill and relaxed with a glass of wine at a small outdoor cafe while enjoying the views and the perfect day. We then took our time walking back to the hotel, not in any hurry to take a direct route, encountering intriguing streets, pretty parks, a fun outdoor neighborhood market, and other serendipitous gems along the way. 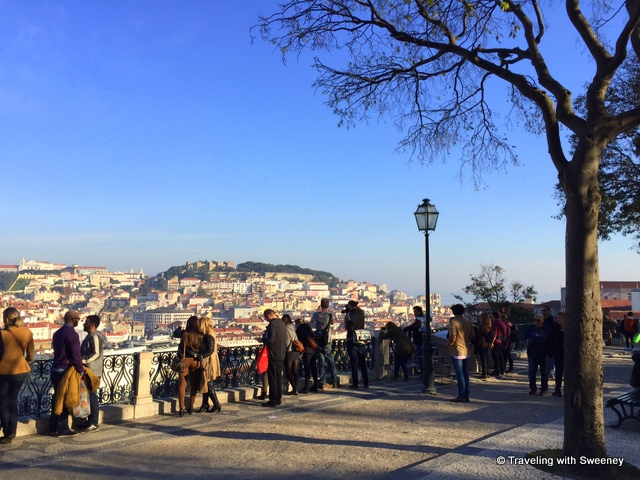 In the historic port district of Belém, we toured three iconic Lisbon sites.

Approaching Torre de Belém, the 16th-century fortress prominently positioned on the Tagus to the east of the bridge, I was immediately struck by the beauty of the stone-carved turreted structure highlighted by its isolated spot on the river.  This UNESCO World Heritage Site’s design and location creates a commanding presence. You can also see how it was a welcome sight for returning sailors. 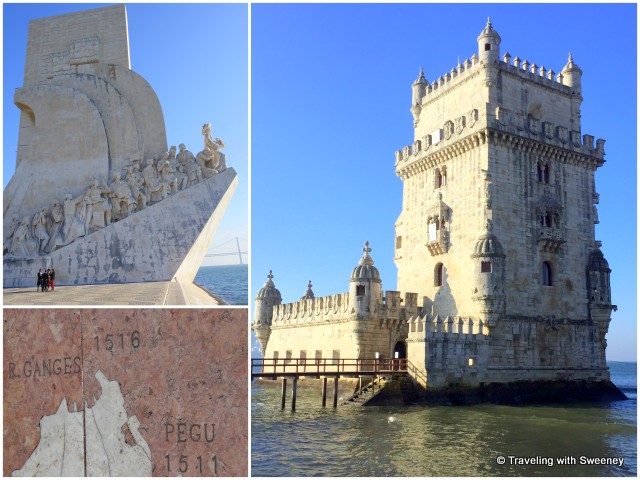 Near the tower, is the Padrão dos Descobrimentos, Monument to the Discoveries, (shown left above) with statues of scholars, sailors, and clergy following the lead of Henry the Navigator. Henry was a royal prince of Portugal and is credited with starting the Age of Discovery, the period in history during the 15th and 16th century when Europe explored and/or discovered lands in Africa, Asia, and the Americas. In the plaza around the base of the monument is a map engraved in the pavement that highlights Portuguese discoveries around the world.

The third of the major Belém icons and another of Lisbon’s UNESCO sites is Jerónimos Monastery, a large complex including a church, cloisters, and galleries. The church is the final resting place of royalty and prominent Portuguese figures, including Vasco da Gama. In an hour, we were able to appreciate the splendor of its early 16th-century Gothic Manueline architecture and beautiful interior.

It was in Lisbon that we got our introduction to Portuguese food, including the pastry, Pastel de Nata (top right below), an egg custard tart that is popular throughout the country and in other parts of the world with Portuguese influence and populations. By the way, it was at Jerónimos Monastery where the monks first created Pastel de Nata. The nearby bakery, Pastéis de Belém, still uses the original (and secret) recipe. 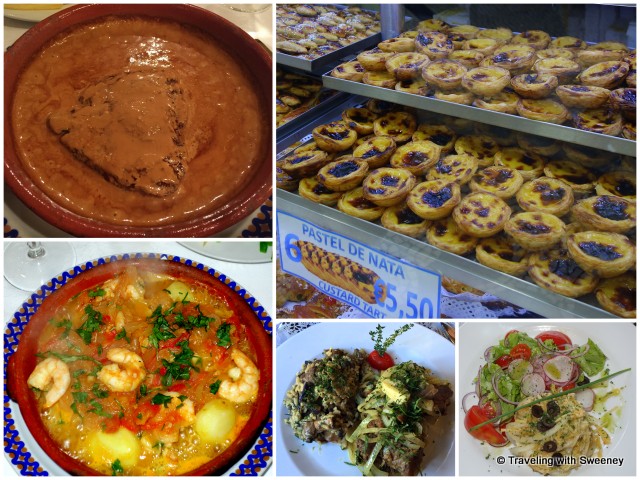 Our first meal in Lisbon was lunch at As Velhas, a small restaurant tucked along a narrow side street off of the Avenida that was recommended by the concierge at Hotel Tivoli. My dish was a new experience for me — sirloin steak in a rich coffee sauce. I really enjoyed the unusual combination of flavors. Mr. TWS had a delicious and steaming hot seafood stew.

The next day at Carmo Restaurant and Bar for lunch, we ordered two specialties — salted codfish with onions for Mr. TWS and a hearty serving of grilled Iberian pork and mushroom risotto for me.

Everywhere in Lisbon there is color, vibrant and subtle, seen in art and on buildings. 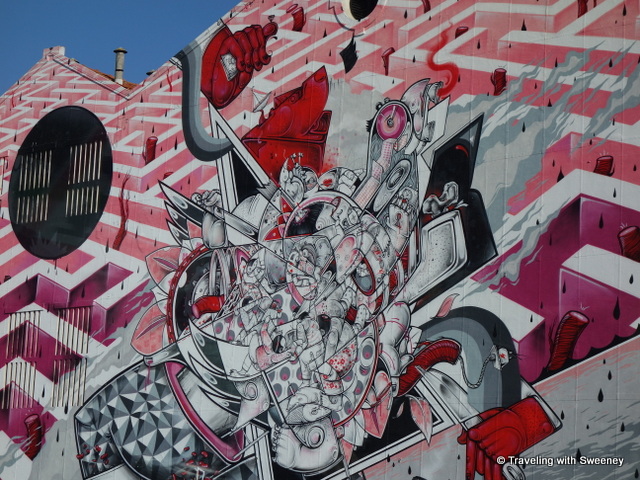 Street art on an industrial building along the waterfront

Whether grand or simple, many homes and public buildings have characteristic tile facades with wrought-iron balconies with flower boxes and other adornments. 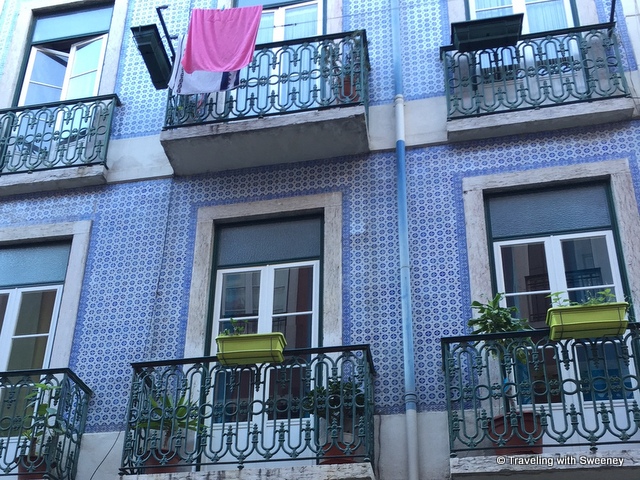 Azulejos (blue and white tiles) and tiles of other colors and designs are prominent and very distinctive in Portugal. 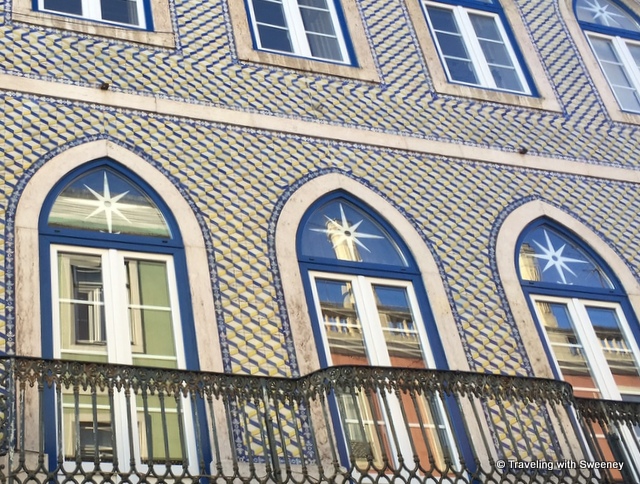 Next time in Lisbon: Museums

Lisbon has many museums and galleries. These are just a few that I’m definitely putting on my list for a future visit.

Museu Nacional do Azulejo (National Tile Museum) has collections of historic azulejos, among them a Lisbon cityscape display that was made in 1738 with 1300 of these blue and white tiles.

Museu do Designe e da Moda (Museum of Design and Fashion) includes exhibits of glass, ceramic, and furniture items from the 1930s to today and creations of famous designers such as Yves Saint-Laurent.

Museu do Fado (Museum of Fado) honors the traditions and cultural history of fado music in Lisbon.

Museu Nacional dos Coches (National Museum of Coaches) is the most-visited museum in Lisbon with collections of horse-drawn carriages from the 16th to the 19th centuries. 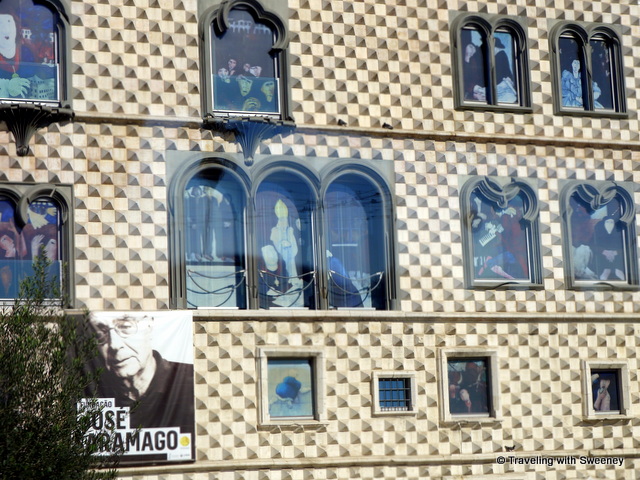 Disclosures: Our prelude to a cruise in Lisbon was sponsored by Viking River Cruises, but our opinions and perspectives are totally our own — as always.

25 thoughts on “Prelude to a Cruise: 7 Lisbon Highlights”