I dreamt of going to Switzerland since I was nine years old. Immersed in the glossy travel guides I collected, I could almost picture myself there. But it seemed a place too fantastic to ever be reached. I finally had the chance to travel to visit Switzerland from Geneva to Interlaken to Lurcerne as an adult. I was so excited that I couldn’t sleep at all on the flight from San Francisco to Frankfurt or the connecting flight to Geneva.

After checking into the Hotel Bristol on the Rue du Mont-Blanc, I set out on a walk across the Rhone River to the old town part of the city. My stay in Geneva was going to be very short, so although feeling quite tired from the flight, there was no way that I could stay in the hotel and sleep. It was a blustery November day and leaves were swirling around as I walked along the narrow, winding streets of the old town past many shops, cafes and St. Peter’s Cathedral. I stopped in a café for a coffee (with chocolate, of course) and sat by a window watching the people and scenes happening around me, hardly believing that I was, at last, really in Switzerland. The little bit of French I knew at the time and a phrase book were very helpful in communicating at my stops throughout the afternoon. I was pleased to find that people were very patient and friendly, especially since I started most conversations with “Excusez-moi. Parlez-vous anglais?” 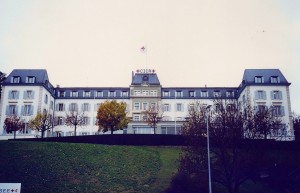 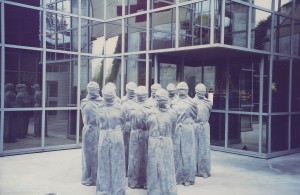 In addition to being well-known as a premier location for chocolate and watches, Geneva is home to many world-class museums, galleries and historic places. I toured the International Museum of the Red Cross and Red Crescent (MIRC), which has intense and absorbing exhibits presenting the history, contributions and focus of the world’s first humanitarian organization founded by Henri Dunant in 1863. The sculpture at the entrance of the museum is called “The Petrified” by Carl Bucher. It is very thought-provoking and exemplifies violations of human rights, appeals for tolerance and efforts to alleviate suffering. Nearby MIRC on the Avenue de la Paix is the United Nations office in Geneva, the Palais des Nations. Unfortunately, I missed the tour that day, but enjoyed seeing this significant place from the outside as I explored the city. 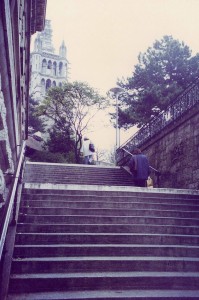 Over the next three days, we traveled by Swiss Rail through a part of Switzerland that included Lausanne, Montreux, Interlaken, Lucerne and then back to Geneva. First stop – Lausanne, a picturesque city on Lake Geneva that is home of the International Olympic Committee and Olympic Museum. From the train station we walked up the cobblestone streets of the city with a local woman who showed us the way up the steep hill to Lausanne Cathedral, built in the 13th century. We were awed thinking of all the people who must have walked the same footsteps over the last millennium. The cathedral is surrounded by winding streets with many shops, restaurants and offices.

The next stop on our journey was Veytaux, a short distance by bus from the train station at Montreux. Here was Château de Chillon, a castle built in the 9th or 10th century located near the shore. Lord Byron’s poem “The Prisoner of Chillon” is about a Genevois monk who was imprisoned there. The dungeon is open to tour and has quite an eerie feeling. Being there off-season and late in the day, we were the only people touring the buildings of the castle which allowed us to roam around feeling like explorers finding a long-deserted castle instead of tourists. 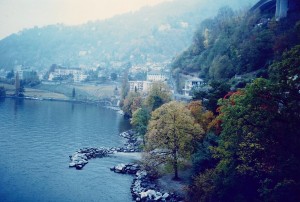 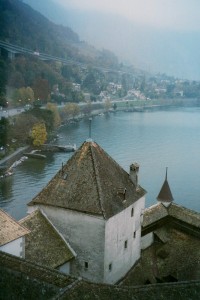 Back in Montreux to catch the train to Interlaken, we were somewhat confused about what train to board. There were three young women trying to help us, one in particular who spoke English. They were concerned that we were not taking the right train to Interlaken – saying that this one “went up the hill”. We were still confused when it was time to depart, but got on the same coach as they did. When we asked the conductor if the train went to Interlaken, he said “Yes”. When one of our new friends spoke to him in French, he replied (in French), “What are you – their family?” So the train started moving and we just accepted the situation and felt it might be a serendipitous adventure. The train made a few local stops and we realized that it would be a long time before we reached Interlaken, where we hadn’t made any hotel reservations. Many people got off at the same stop where we bid “au revoir” to our new friends. 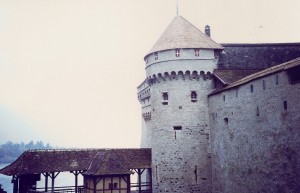 As it turned out, the women were recommending the fastest, easiest way to Interlaken. The one we chose was a much slower, 3-legged route that is the same path as the scenic Golden Pass rail line, but does not have the panorama coaches or service that transports tourists through the Alps. This was the local train and with that realization, I was even more delighted, albeit a little apprehensive that we had chosen this route. The train was chugging along and obviously starting to go “up the hill” although I couldn’t see anything in the dark. We kept climbing and at one point, the lights flickered on the train, went out and the train came to a stop. Looking out the window, I could see that snow was falling, but in the darkness couldn’t make out anything about our surroundings, further adding to the wonderful sense of adventure I was feeling. After a few minutes, the train jerkily started moving again and we were on our way. I looked at a map of Switzerland to see where we might be going. If this was the wrong train, Italy seemed to be our likely destination. Further along the route, we made a stop in Gstaad, which of course helped us to get our bearings.

After we had made two train transfers, at Zweisimmen and Spiez, we started looking up Interlaken hotels in our guide book, hoping to find a room since it would be 10 p.m. when we arrived. The hotel we first called was closed for remodeling, but they recommended the Hotel Interlaken. We’re so glad they did. From Interlaken Ost station, it was a short walk on a very quiet night. It’s a lovely hotel in a building dating from the 14th century. Our room had French windows with a pleasant view of the adjacent churchyard, whose bells rang beautifully on Sunday morning. We had a busy plan for the following day as we would be headed to Jungfraujoch, the “Top of Europe”, to experience an amazing journey on the Jungfrau railway and a spectacular view of the Alps.

At the “Top of Europe”, I felt on top of the world and wished this trip could last forever!

15 thoughts on “A Dream Comes True: From Geneva to Interlaken”