Mark Twain was enchanted by Heidelberg on his “tramp” through Europe in 1878 about which he wrote A Tramp Abroad. 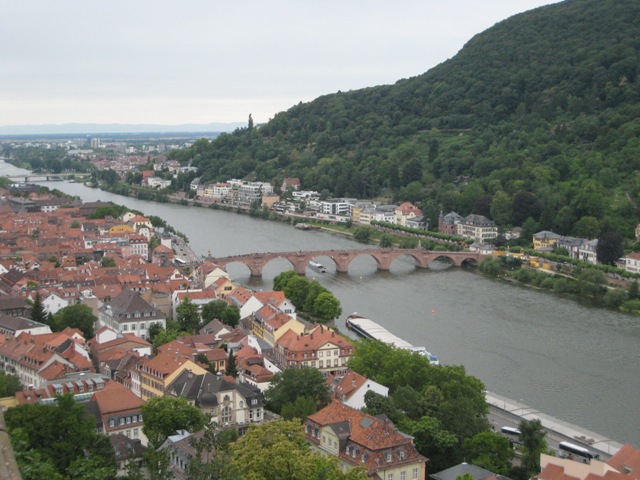 It’s easy to see what appealed to him. He may have been admiring a vista similar to that pictured above — the arches of the Old Bridge (Alte Brücke) across the Neckar River with Mannheim and the Rhine River in the distance — when he wrote, “I have never enjoyed a view which had such a serene and satisfying charm about it as this one gives.” That old world charm still exists in Heidelberg and the surrounding area.

We started the day with a walk along the Neckar River from our hotel on Vangerowstraße toward the Old Town. It was a pretty, tree-lined sidewalk part of the way with views of affluent residential areas on the other side of the river.

Near the Kongresshaus, we saw people getting on a river cruise boat and decided to follow them on board. We hurriedly bought our tickets without really knowing where the boat was headed. It was a perfect way to spend part of day. It’s said that boating on the Neckar River is what enabled Mark Twain to break through his writer’s block on Huckleberry Finn.

Shortly after leaving the dock, we went through the impressive locks, part of a system of dams and locks that have been built on the Neckar to prevent flooding. 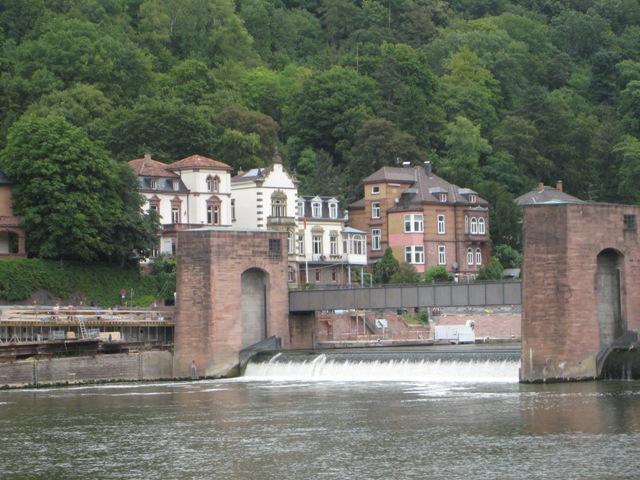 About 6 miles from Heidelberg, we came to Neckargemünd, a picturesque town founded in the 10th century where the boat stopped briefly for passengers.

The cruise continued through scenic countryside and recreational areas. We also passed by the town of Dilsberg, a fortress on the mountaintop. 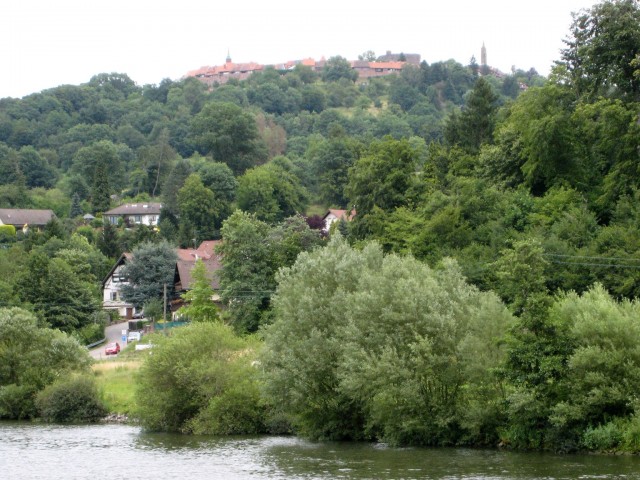 About 3 miles further upstream, we docked at Neckarsteinach, a town distinguished by having four castles that were built between 1100 and 1300 AD. 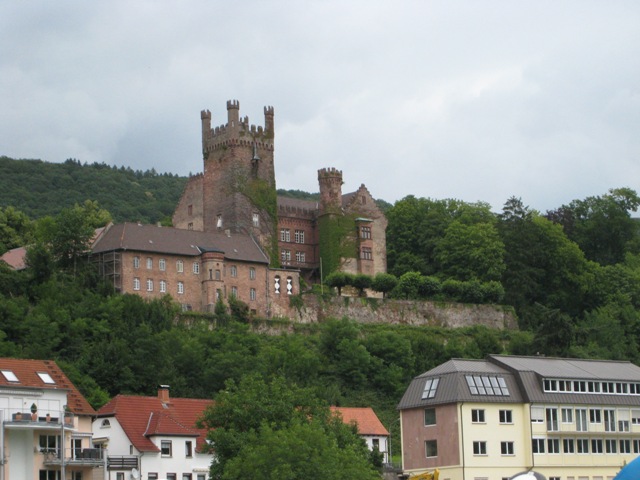 Built around 1100, Hinterburg is the oldest castle in Neckarsteinach. We could see people walking toward the castle and others who had climbed to the top of the tower. 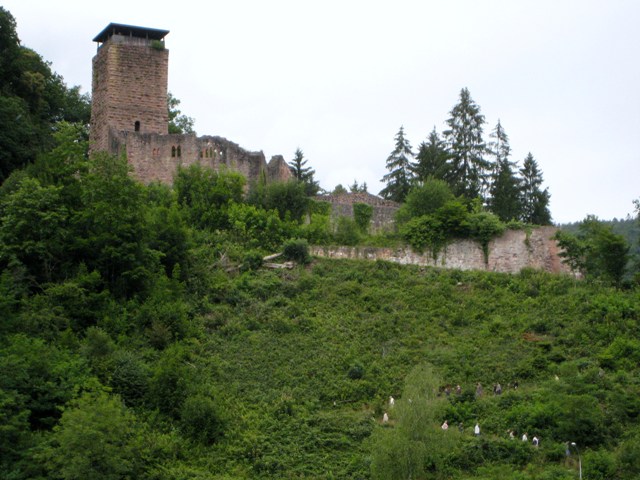 In the hills overlooking the valley is Schadeck, built in 1230. 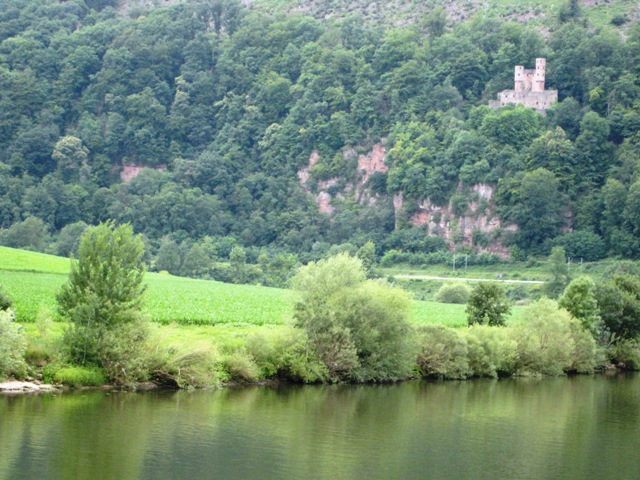 Returning to Heidelberg, we were eager to visit the most famous castle in the area, Heidelberg Castle. Although you can get to the castle from town by walking up the cobblestone road or a stairway with 315 steps, we took the short ride on the Bergbahn railway from the Kornmarkt just for the fun of it. 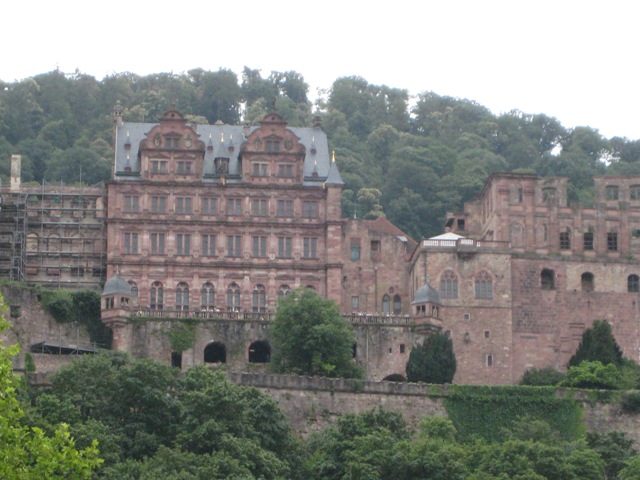 Originally built in the 13th century and added to until the 17th century, it reflects various architectural styles ranging from Gothic to Renaissance. The castle is largely ruins since many of the structures were destroyed by two wars and finally a lighting strike in 1764. 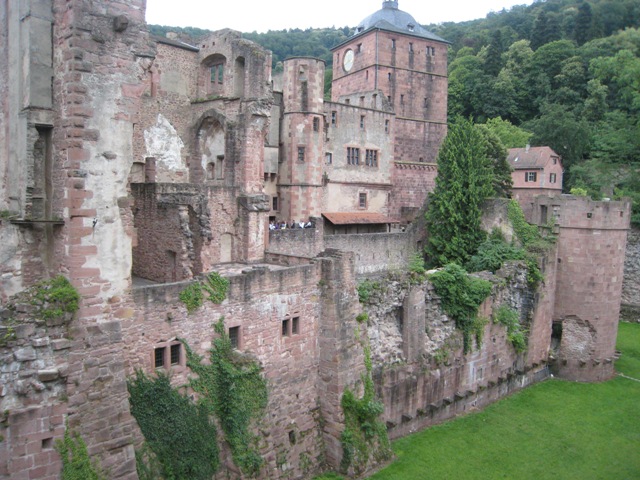 Mark Twain wrote that the castle was: “… deserted, discrowned, beaten by the storms, but royal still, and beautiful.” With many tourists there, it certainly didn’t feel deserted, but it is quite royal.

Inside the courtyard, a stage and lights were set up for a concert in the evening. I wish we could have stayed for that. Many events are held at the castle, including weddings. A bride and groom were having their photos taken at picturesque locations on the property. 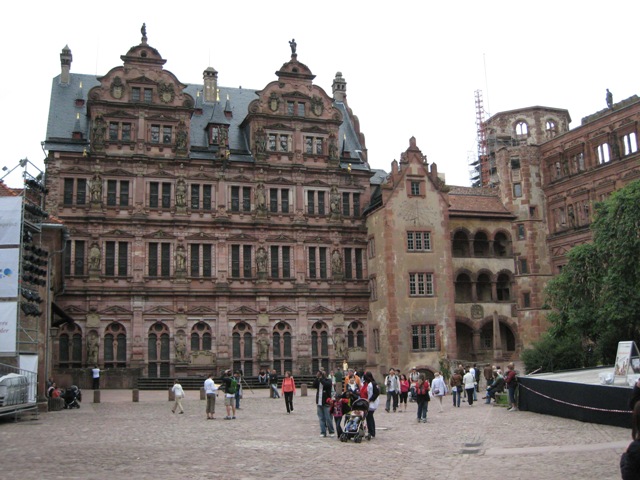 Twain also wrote about the Heidelberg Tun, the world’s largest wine barrel made in 1751 that can hold over 221,000 litres of wine. On the platform that goes around the top of the barrel, we really got a sense of its size. 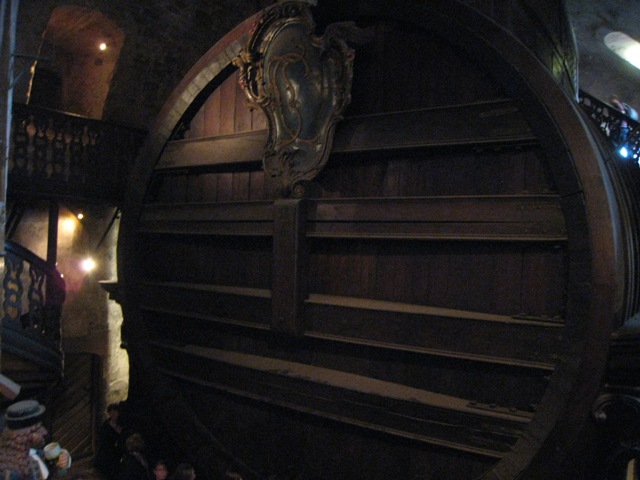 We spent some time roaming around the lovely grounds and enjoying views of the Old town and the Neckar River in both directions. 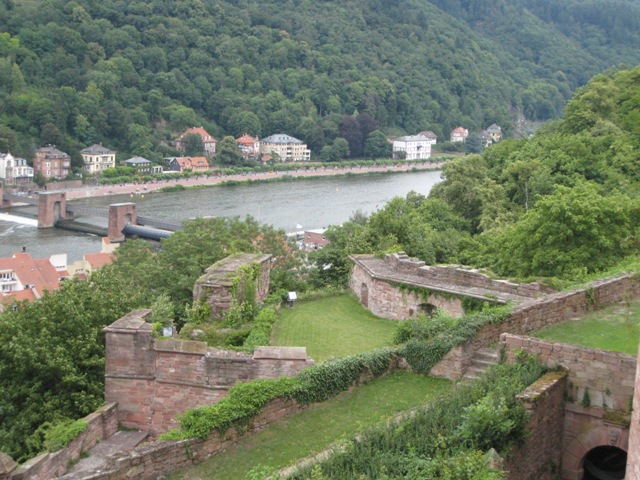 It was a peaceful walk down the winding road from the castle to the Old Town, where the Marktplatz was bustling with visitors sitting at outside tables surrounded by shops and cafés. 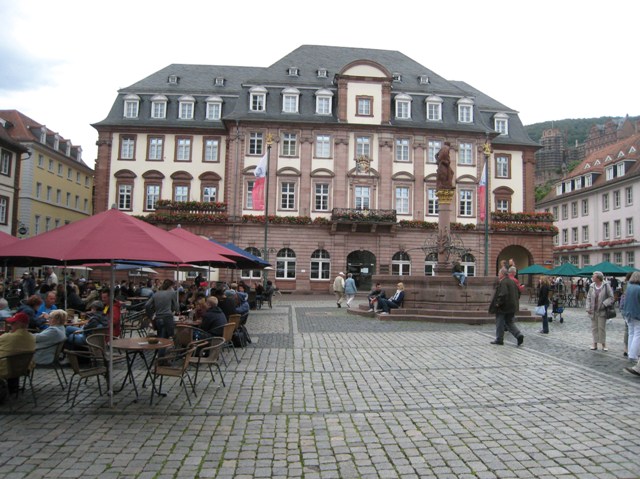 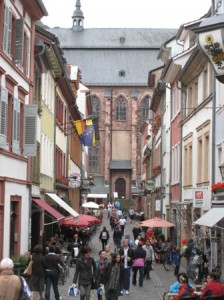 Our last tramp in Heidelberg was through the streets of Old Town and back to the hotel via a walk along the river. An early morning departure on the train to Frankfurt would be coming all too soon.

50 thoughts on “A Tramp in Heidelberg”