Until recently, Budapest District 8 was off the radar for visitors, considered a high crime area with buildings in various stages of disrepair from neglect. It’s still not a place that tourists will find easily. 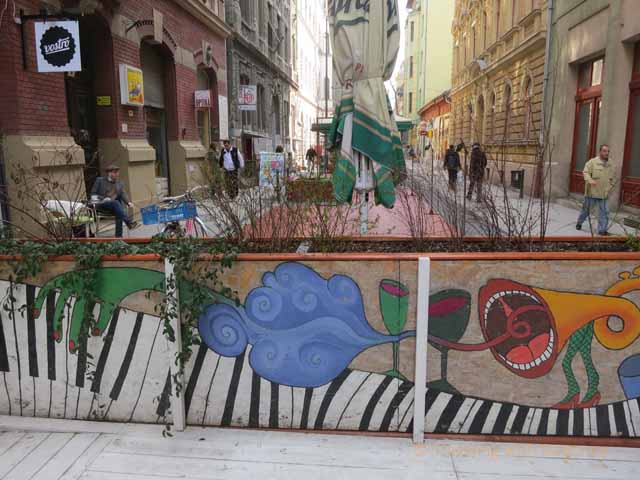 Just as in other places we’ve visited, we were really glad we carved the time out for a Context Travel walking seminar. During our “Barons of Budapest” tour, we were introduced to District 8 which is known as the Palace District. We would not have stumbled upon this area or learned the stories and history of the area on our own. Our informed and friendly guide, Eniko Békés, a Budapest native with a Master’s degree in art history and a PhD in Neo-Latin Studies, has an enthusiasm for the topic which was also an important part of the tour.

The palaces of District 8 are not the royal palaces that you think of when visiting many places in Europe and the barons are not the barons of nobility, but instead were more like the aristocratic “railroad barons” of the U.S. That is, they were people of wealth, power and influence mostly without noble bloodlines. Their time in history was the latter part of the 19th century, when Hungary assumed its elevated position among countries in the Austrian Empire as it became the Austro-Hungarian Empire in 1867. During this time, the wealthy families of Budapest were trying to build residences modeled after the grand mansions of Vienna and Paris. Many of these structures in District 8 were destroyed in World War II. Some were designed by architect Miklós Ybl who also designed other landmark buildings in Budapest, including the Hungarian State Opera and St. Stephen’s Basilica.

There’s lots of interesting history that I won’t cover in this post; instead my main objective is to show some of the exterior architecture and magnificent interiors of a few of the buildings we toured as well as other sites along the way that we found interesting.

We began our walk in front of the Hungarian National Museum on Múzeum körút. The steps pictured are important in key historical events, such as the Hungarian Revolution against the Austrian Empire in 1848 and annual events commemorating the revolution. Additionally, before the construction of the current Hungarian Parliament, the members met in this building. 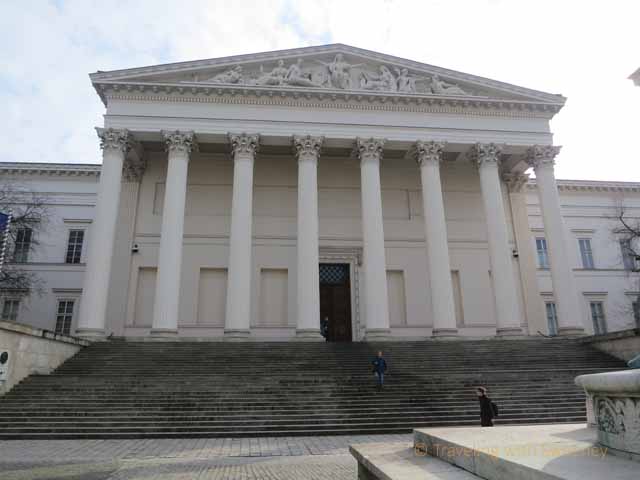 As we turned off the busy Múzeum körút to go deeper into the Palace District, we began to see a different side of Budapest.

It was nice to learn that many of the residential palaces of the area are being restored and used for functional purposes, such as government buildings, contributing to the general gentrification of this historical center of Pest (the city on the east side of the Danube that was joined with Buda on the west side to form Budapest). As a result, we were only able to see the exterior of some of the buildings, such as Dessewffy Palace pictured below. 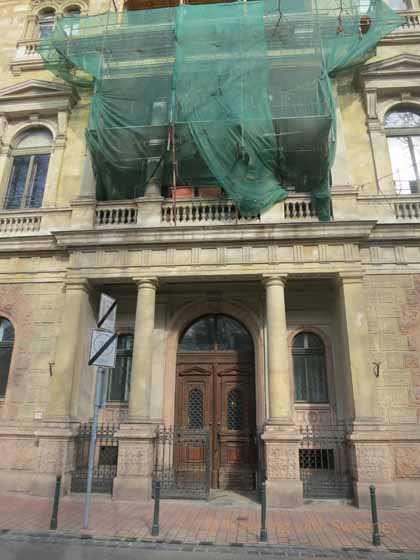 The Italian Institute of Culture on Bródy Sándor utca pictured below gives a hint of the original splendor and the opulence of buildings in the Palace district. The building was designed by Miklós Ybl and was the seat of the House of Representatives of the Hungarian National Assembly between 1865 and 1902. In front of the building is a bust of Giorgio Perlasca, who was an Italian who saved thousands of Jews during the Holocaust. 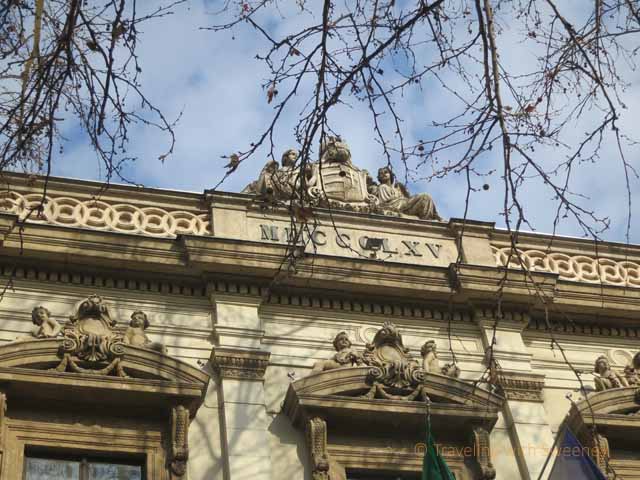 Opulent exterior of the Italian Cultural Institute in District 8

It was interesting to see rows of these houses clustered together along city blocks. Typically, there had been an initial building and then the others eventually filled in. The first light building as you move leftwas the original Parliament building. 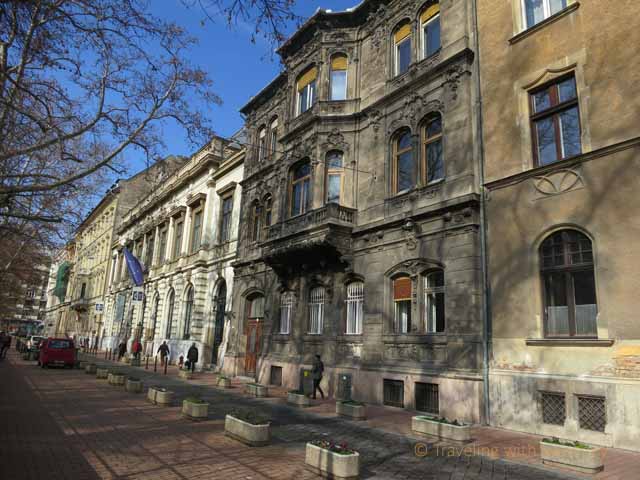 Row of buildings in the Palace District

I liked the unusual façade of Gschwindt Palace building with its unusual clock just above the two windows on the right. 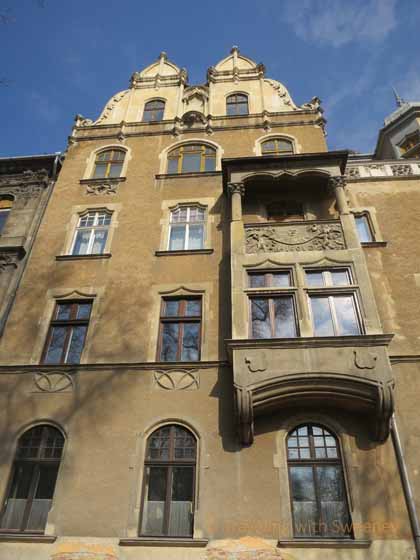 Exterior of Gschwindt Palace in the Palace District

The elaborate staircase pictured below is located in the former Festetics Palace, originally belonging to one of Emperor Franz Josef’s ministers. It is now Andrássy University, the first German-speaking university in non-German-speaking Central Europe. 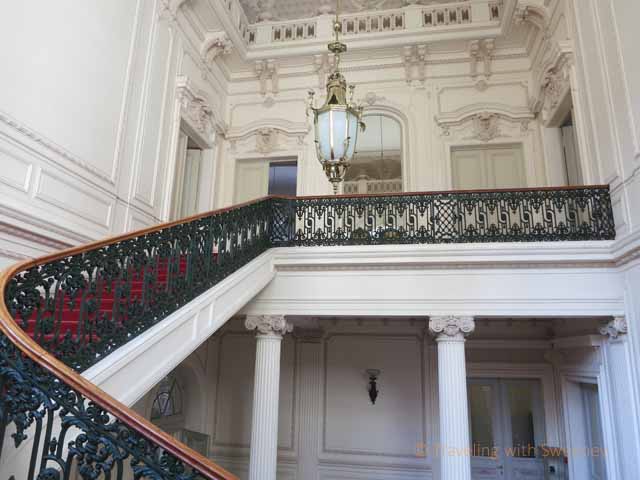 The former ball room is used as a large meeting room but even with the modern chairs the beauty of the interior prevails. The many mirrors, the elaborate chandelier and the ornateness of the windows, walls and ceiling were my favorite parts of this room. 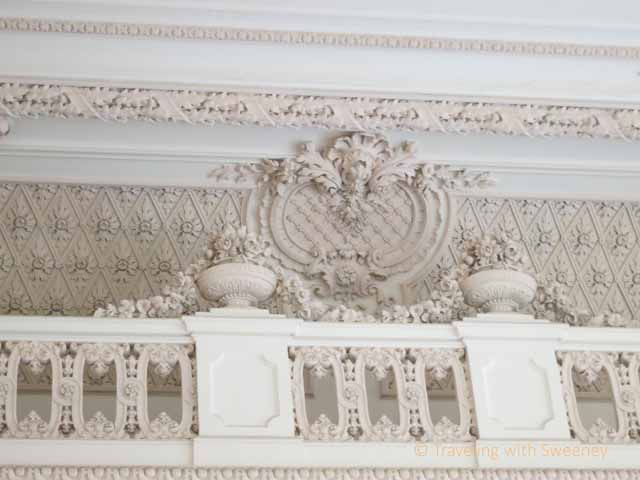 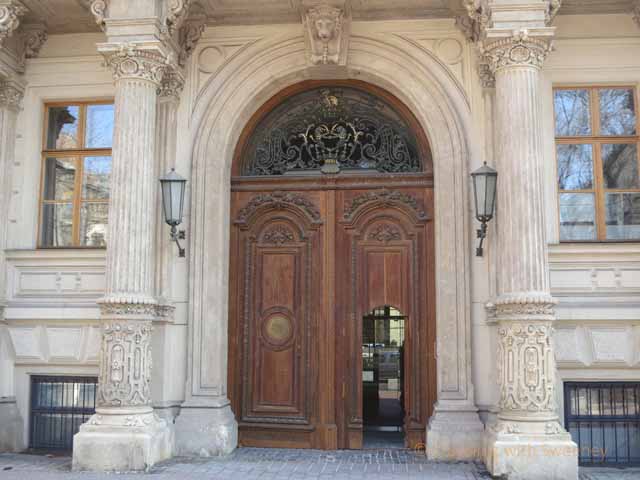 This impressive building is one of three Károlyi Palaces. The building to the left of it is a remnant of the communist era built in the 1960s on the site of the Hungarian National Stables, demolished after World War II. 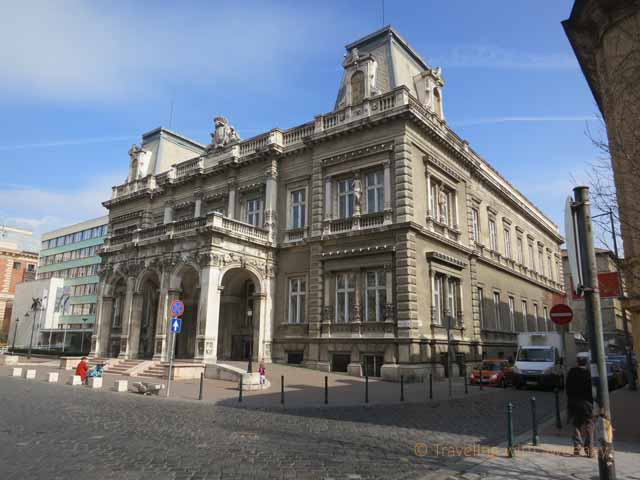 One of the three Károlyi Palaces

The most impressive building we toured was the Metropolitan Ervin Szabó Library, formerly Wenckheim Palace. It would be hard to come up with an excuse for not going to study in a library that is this amazingly beautiful. However, once there I can imagine it would probably be difficult to concentrate on studies in such a setting. Below are pictured some of the highlights. 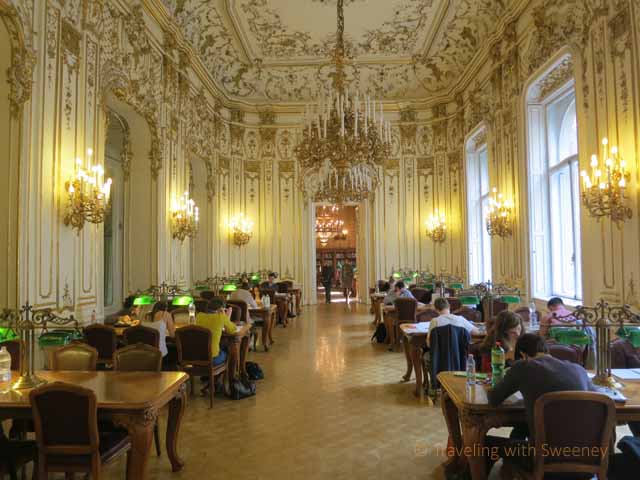 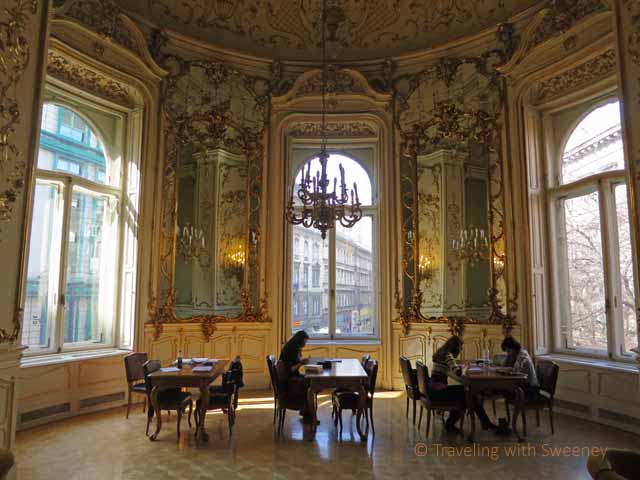 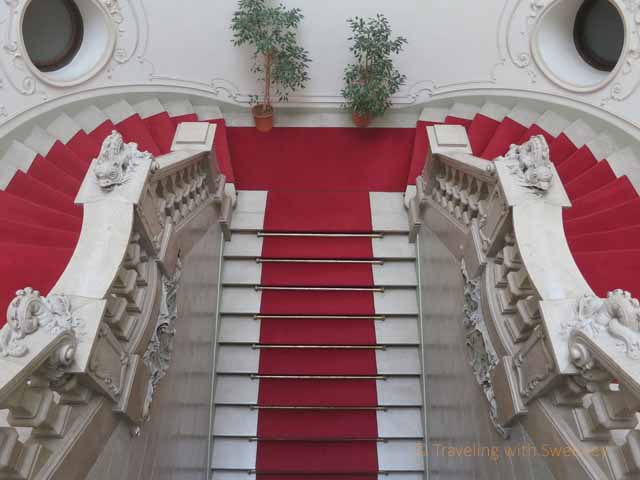 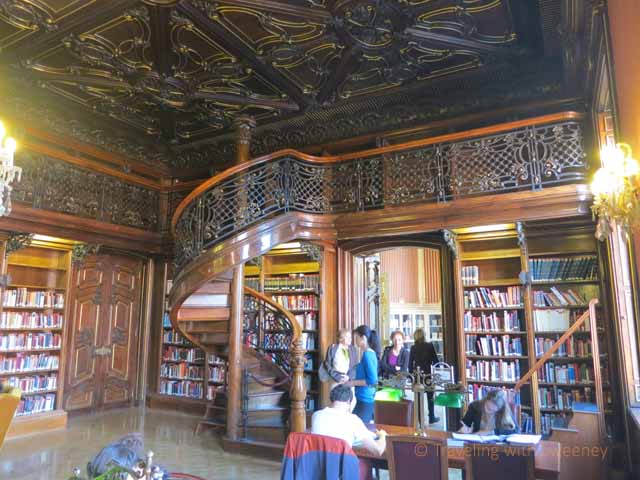 This atrium is in the lobby area of this magnificent library. 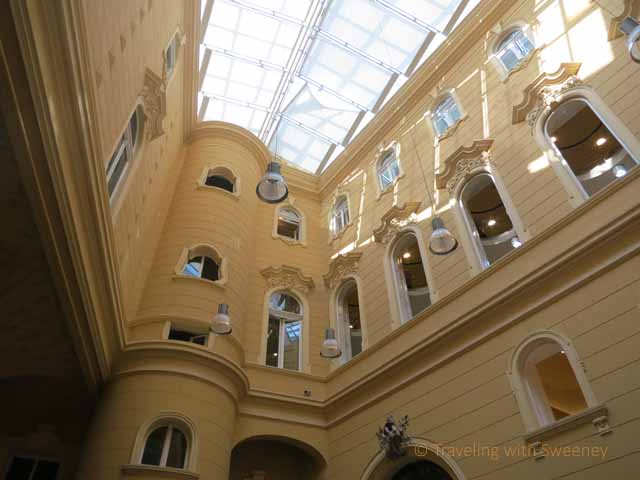 This painted dome ceiling and spiral wrought-iron staircase in another District 8 building are further examples of the opulence of Budapest’s Golden Age. 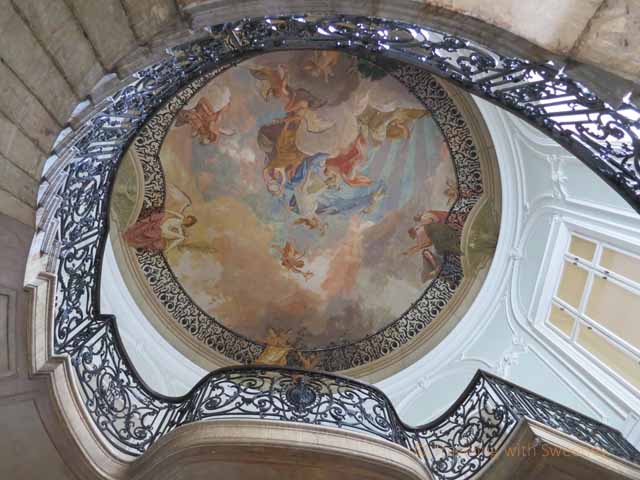 Gorgeous ceiling and staircase in former palace of District 8

Another site that played a big part in Hungarian History was the Magyar Radio building, the flash point of the Hungarian Revolution of 1956 against the government of the Soviet People’s Republic of Hungary and its policies. It began as a student revolt and when the students attempted to enter the state-owned radio building, the police fired on the crowd killing several.

The names of those who died are etched on the plaque between the two windows on the left. The flag pictured, symbolizing the 1956 Hungarian Revolution, has a hole in it where the communist coat of arms was cut out.

Plaque commemorating those slain at the building in 1956 revolution

Not all of the construction in District 8 is preservationist and restorative. In the photo below, the original fence of a 19th century palace was preserved but behind it is a modern glass building. Notice also the “attractive” elevator sticking up in front of the fence. Fortunately, this was a rare sight in the area. 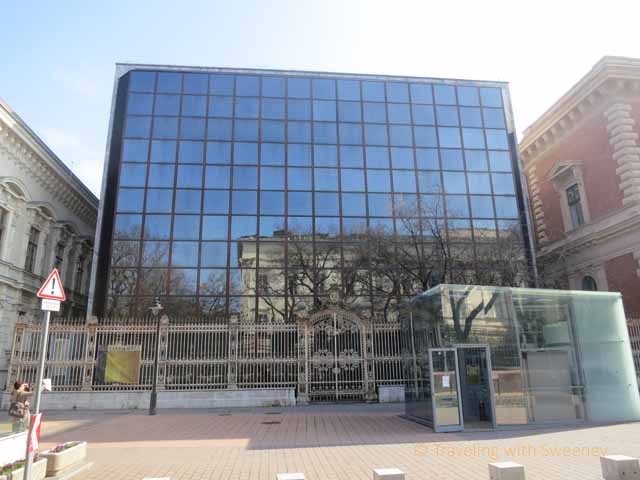 The Palace neighborhood of Budapest District 8 gives you a different perspective of the city and its history. 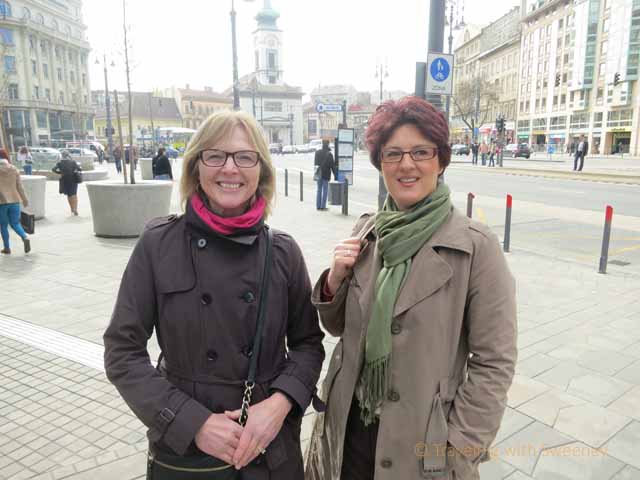 Thanks to Context Travel for hosting our walk.