To cruise or not to cruise? 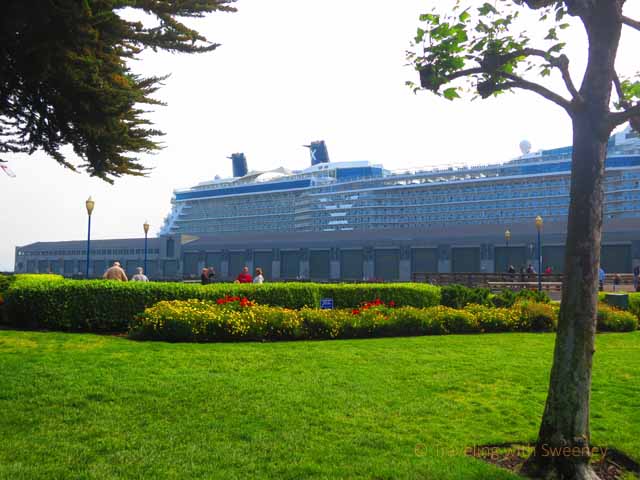 Two years ago, I wrote a blog post that posed this age-old question after a tour of the Celebrity Millennium cruise ship while it was in port in San Francisco. We never left port, but I got a good perspective of the facilities, a gourmet lunch and some awesome views of San Francisco. As a cruise skeptic, I went on board with an open mind, but not expecting that I’d be any closer to taking a cruise.

During the tour, I found myself warming up to the idea with the realization that with so many different ships and itineraries available, there might be one that would be right for me — possibly an Alaska cruise.

Two years later, I’m still cruiseless. But recently, I did have an opportunity to tour another luxury ship, the Celebrity Solstice — this time with Mr. TWS. It was his first time ever on a cruise ship, asea or at port. So I’m going to turn the post over to him. Is a cruise in Traveling with Sweeney’s future?

It was interesting to read about Sweeney’s experience on the Celebrity cruise ship tour. I’d never really thought that a cruise matched our travel interests, so I had not analyzed it as an option. Like anything one hasn’t tried, this impression was based on snippets of information picked up here and there, such as the Queen Elizabeth and the Queen Mary, and others from the entertainment industry, such as the Love Boat (though I never watched the show). Of course, on the other end of the spectrum there was also the Titanic! But I digress. 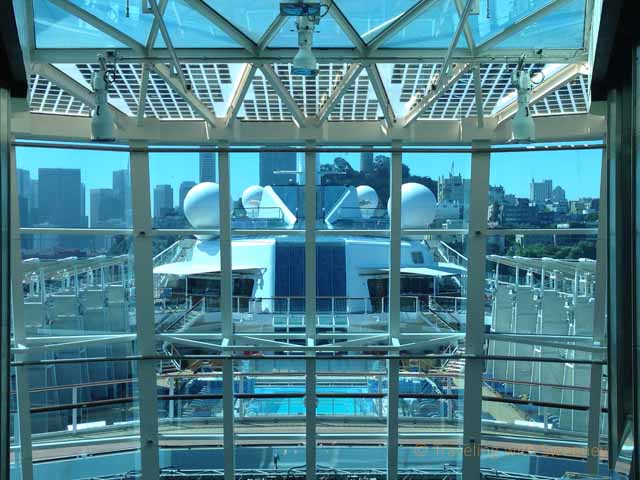 San Francisco skyline from inside the Celebrity Solstice

For me, I have also always felt romance about sea voyages; the thought of being way out to sea, reminiscent of times when sea travel was the only way to get to many places. It is the same romanticism I’ve held for long, luxury train rides such as the Orient Express. Much of this feeling comes from seeing this type of travel in movies that captured the excitement of embarking to remote and exotic places.

There are so many places we want to see and there is always so little time. When we travel, we plan a general itinerary but like to leave daily agendas open (when possible) to leave room for serendipity and exploration, choosing each day’s activities from among a list of potential choices. My perception of cruises has mostly been that they don’t match up with that kind of travel style.

But when an opportunity arose to tour the Celebrity Solstice during a media event, I was intrigued by the opportunity for a first-hand look.

I had seen pictures of cruise ships but had never seen one in person. As we drove along the Embarcadero on a beautiful sunny morning (early morning fog had lifted), Sweeney pointed out the Celebrity ahead on the right at Pier 35. My first impression was that it was immense, somewhat matching my intellectual image, but its size was still stunning. 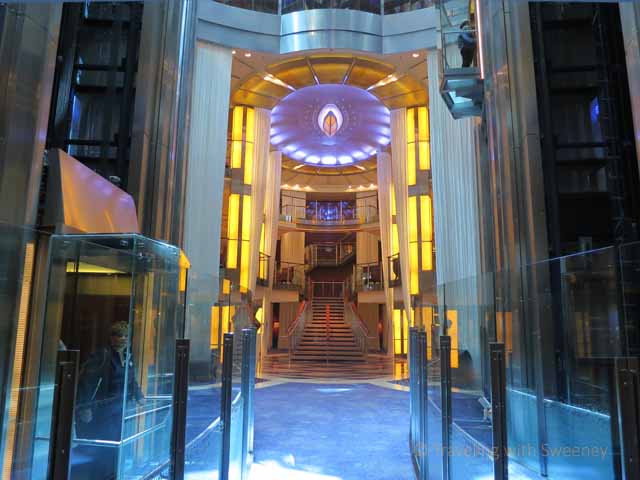 A lobby inside the Celebrity Solstice

I thought it was hard to believe that a boat this large at a height of 16 stories could float. I hadn’t thought about security to get aboard, but with more than 2800 passengers and over 1500 crew, it made sense. (My assumption that this had changed dramatically after 9-11 was confirmed later by our tour guide.) 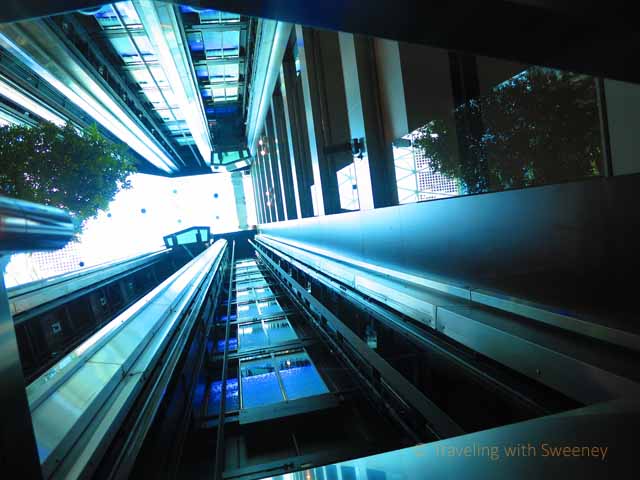 Looking up! On the Celebrity Solstice elevator

After first coming on board the ship and in all the common areas we toured, I was surprised by how elaborate the ship was; it was like a luxury hotel with beautiful lobbies, restaurants and other facilities, except it was more like a large city — an upscale resort and mini Las Vegas all in one. 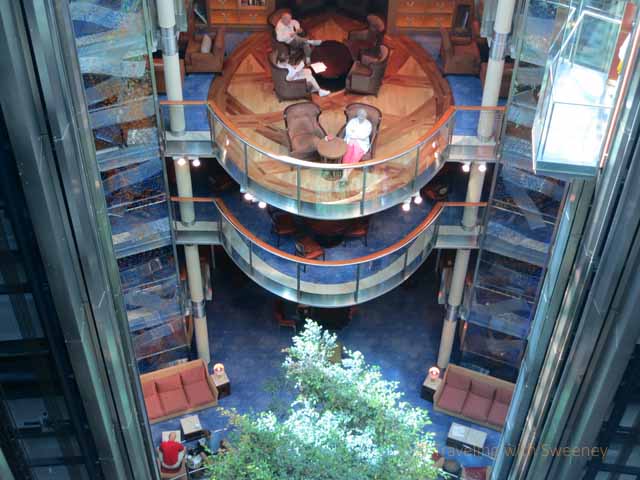 Inside the Celebrity Solstice

We had lunch in the main dining room of the ship, the Grand Epernay Restaurant, where the ornate elegance included a multiple story wine room encased in class (as shown in the photo below). The food was first-rate — salmon in lentils for me, braised short ribs for Sweeney and a chocolate dessert. 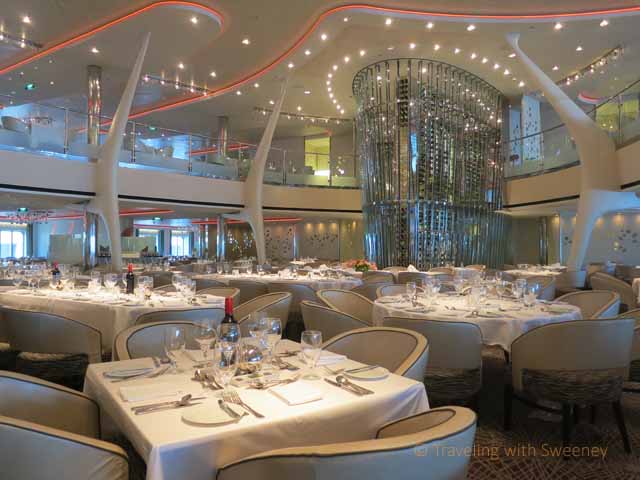 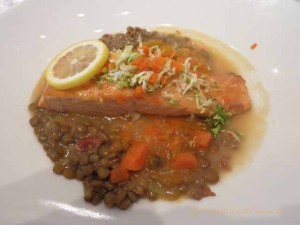 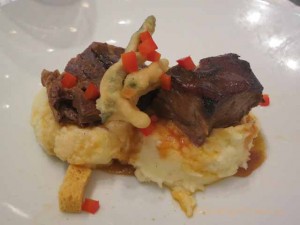 We also got a look at a few of the specialty restaurants and were offered samples of the fare such as Asian dishes in Silk Harvest, classic French cuisine in Murano and light, healthy options in Blu, shown below. All food on the ship is prepared fresh on board. 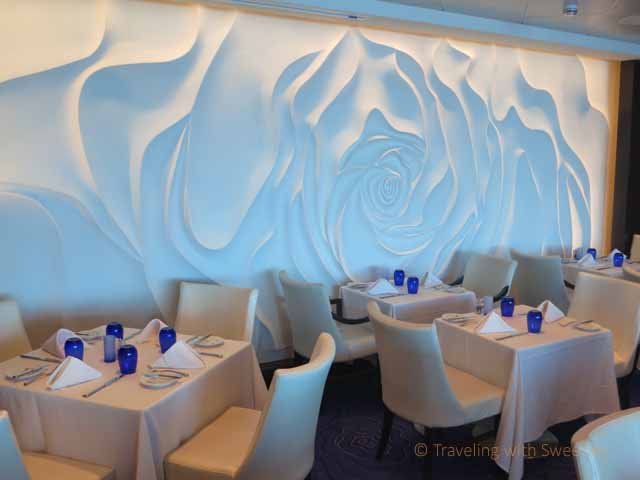 With upscale shops, bars, dance lounges, a casino and theaters, there are plenty of entertainment options. The venue shown below seats over 1,000 people and provides diverse performances such as Cirque du Soleil types of acts. There was also impressive art on display throughout the ship — a collection valued at over $6 million. 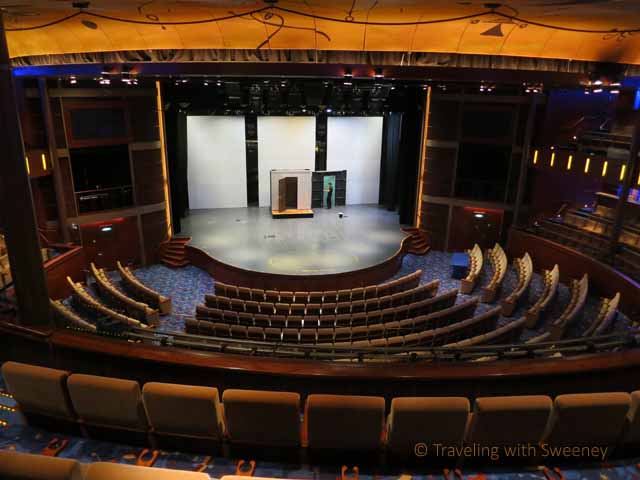 Large theater on the Celebrity Solstice

The fully-appointed AquaSpa (which I would probably never use, but would be a treat for Sweeney) and pools (which I’m sure that I would frequent) offer opportunities to cool off, warm up and relax.

There were open decks with the lines of deck chairs and I was very surprised to see one deck with a large expanse of beautiful green lawn, called The Lawn Club. It seemed like a nice touch to have a touch of green earth while cruising on the deep blue sea. 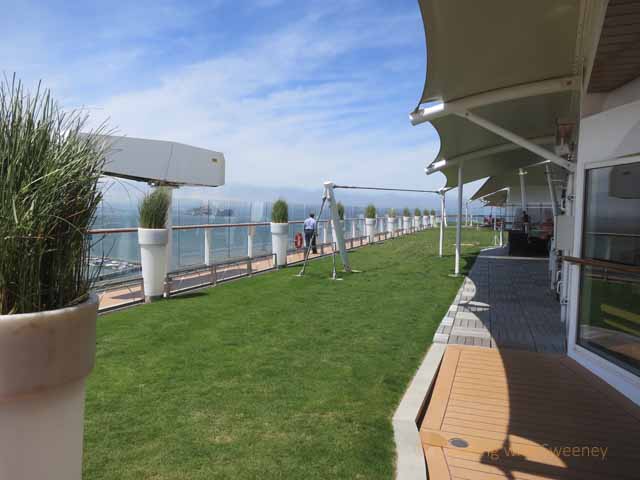 The Lawn Club on the Celebrity Solstice

There are also other “green” aspects in the eco-friendly design. According to our guide, Celebrity is committed to using eco-friendly technologies whenever possible — partly from the good sense of caring about our planet, partly that the measures are economical. For example,  the paint used on the hull reduces friction and enhances fuel usage. The ship was equipped with the ability to switch fuels to avoid diminishing the experience in Alaska when they enter somewhat enclosed glacier areas. Typically the exhaust on other ships can diminish the experience because of an accumulation of fumes.

One of the issues that had always led me away from cruises was that you might feel confined. The efficient tour brought us through many of the decks and we saw a lot of the ship, and I never had the feeling of confinement. With all of the potential activities, I could easily imagine spending a week, keeping amused and relaxing. 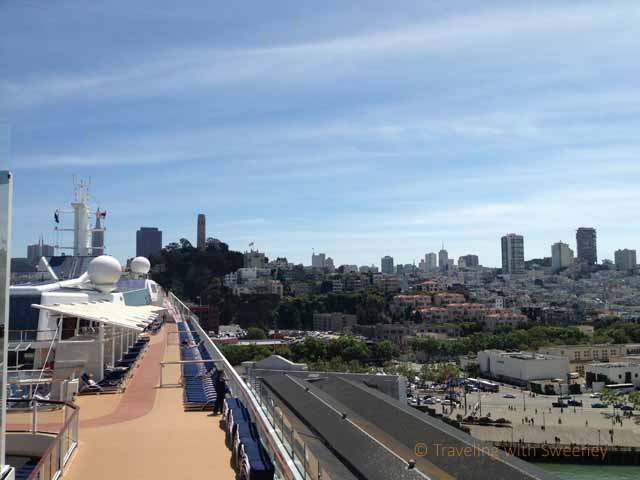 Coit Tower and San Francisco skyline from the upper deck

But what really caught my attention was that everywhere we went on the ship was a view of the magnificence of San Francisco and its key landmarks — the piers, Alcatraz, the Golden Gate and Bay Bridges, Coit Tower and the Transamerica Pyramid building. Whether on the decks with open views or within any of the restaurants and other facilities, all of which had walls of windows providing unobstructed, unique views of the city. We were right in the center of San Francisco with views that rivaled the best vantages for seeing the sights. 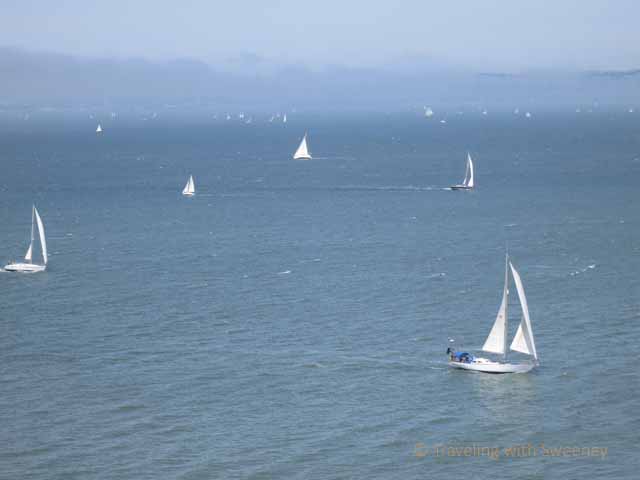 Our guide, answering a question about new developments in Celebrity’s cruise offerings, spoke of special destination cruises that leveraged the ship’s ability to provide unique access to special events. Among those mentioned was San Francisco during the America’s Cup race in August. This would provide the passengers a ringside seat for the finals as well as access to San Francisco including the other activities planned for this global attraction. Also mentioned was a cruise near Normandy that would take advantage of D-Day events. In fact, the cruise that was in progress on our tour day was a wine cruise giving passengers access to wine country tours as well as special wine-centric activities on board. 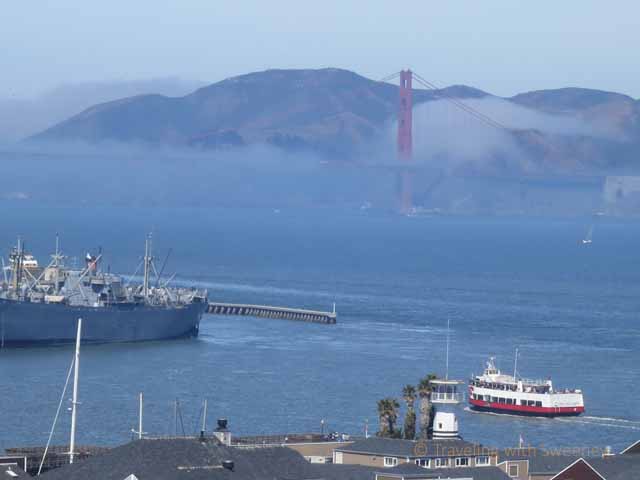 This really hammered home one of the conversations I’d had that had begun to swing me to a positive mind about cruises. One of our friends talked about taking an Alaskan cruise and said it had been fabulous; when I commented that it sounded good but probably not for me, they said that what they really liked was that with the cruise ship they were able to reach locations and see sights they could not have accessed easily or in some cases at all. Now that makes sense to me. Alaska has been one of the places that has long been on our must-do travel list and a cruise might be an option.

But I think even without considering the special events, I could imagine spending some time experiencing the open sea and just enjoying the activities on the ship, fine dining, great views and the diversity of getting off the ship at stops to experience some highlights of various ports. Of course, we’d also be able stay connected to the internet and e-mail services in the Online@Celebrity internet cafe.

We were not able to see any of the rooms because they were at 104% occupancy. In case you’re thinking this means that some passengers had to sleep at the pool, the rate represents instances where there is an added guest in a stateroom. I was surprised to learn that 98% of their tours are at minimally full capacity. During our time on the ship, almost all of the passengers were ashore spending time in the city or on other land excursions. However, I could imagine the buzz of activity in busy social areas with all passengers aboard, but didn’t get the feeling that we’d be cramped in such an immense place. 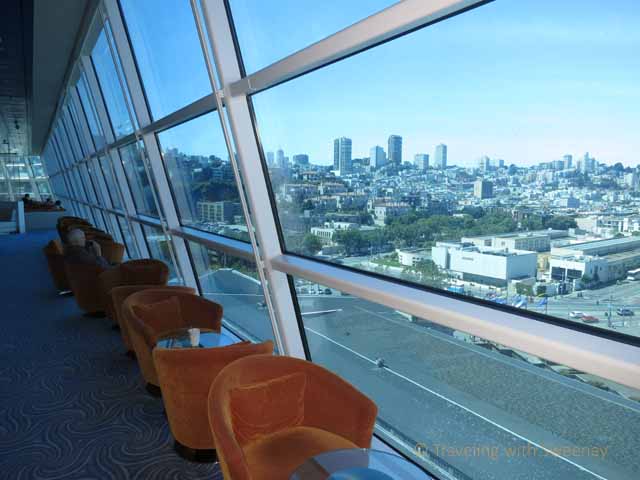 So, is a cruise in Traveling with Sweeney’s future? Will Sweeney and I be occupying seats in this lounge while our ship slowly leaves port? Stay tuned.