A look into the world of Salvador Dali in Figueres, Spain

Each morning when I awake, I experience again a supreme pleasure – that of being Salvador Dali. — Salvador Dali 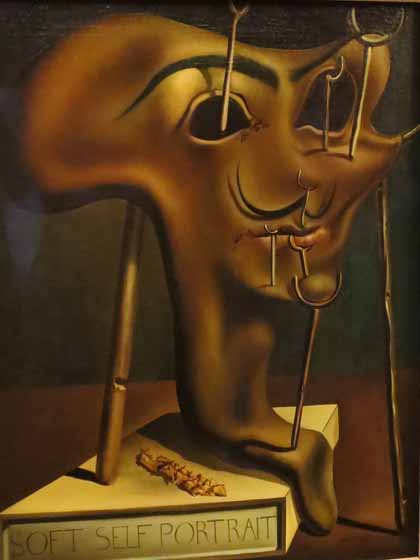 Soft Self Portrait with Grilled Bacon

I have Dalinian thought: the one thing the world will never have enough of is the outrageous. — Salvador Dali

These are not surprising statements from Salvador Dali, one of the prominent founders of surrealism, who exuded an intentionally outrageous persona throughout his life. He sought to shock, confuse, touch nerves, and get reactions.

Dali died in 1989, but his fame lives on in his still popular works and in the places that influenced his life and art in the Costa Brava region of northeastern Spain. At the Dali Theater-Museum in Figueres that he himself conceived and designed, visitors are surrounded by Dali’s surrealism. To many, including himself, he was a genius. To others, he was crazy. I’ve always been an admirer of Dali’s work, but when visiting the museum recently, courtesy of Visit Costa Brava, I became even more interested in the man and his art. 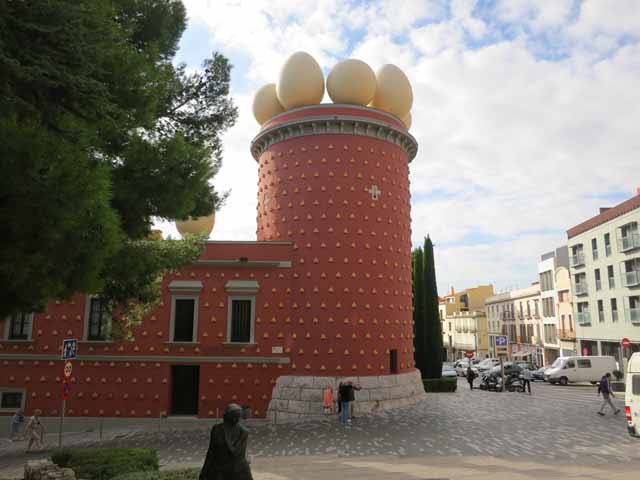 The Dali Theatre-Museum is in the location of the former Figueres Theatre that was destroyed by fire during the Spanish Civil War in 1939. Dali was born in Figueres and at the age of 14 participated in his first art exhibition at the theatre.

Where, if not in my own town, should the most extravagant and solid of my work endure, where if not here? — Salvador Dali


The museum itself is actually a work of Dali’s art. Outside, the building’s walls are decorated with representations of bread rolls common to this area while giant eggs adorn the top. When you’re inside the museum, you are immersed in a Dalinian experience amidst the roughly 1,500 paintings, drawings, installations, photographs, jewelry designs and other works. 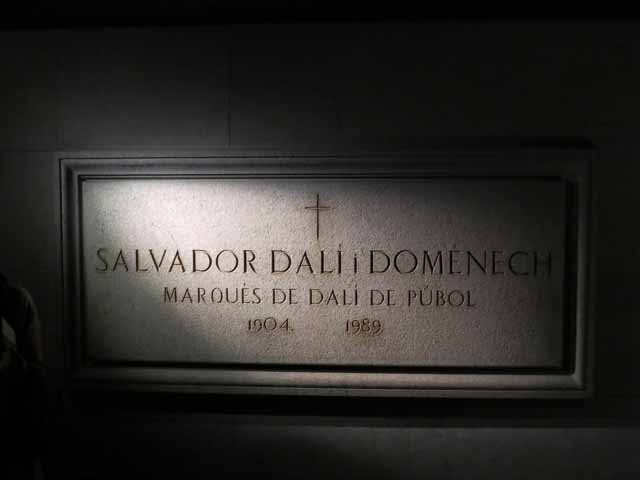 Dali’s last years were lived in his museum. He died in 1989 and is buried in a crypt in an area in the center of the museum near exhibits of gold jewelry that he designed. 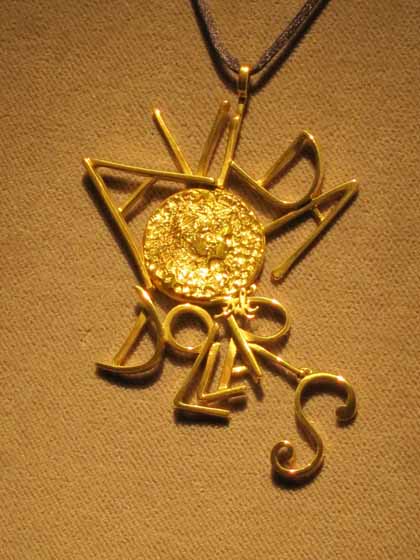 “Avida Dollars” is an anagram of his name and refers to his well-known love of gold and money. 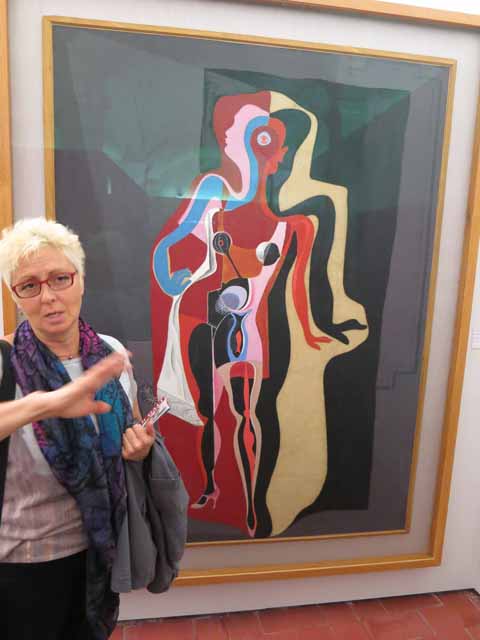 Our museum tour guide, Gloria Lomas, is shown here discussing Barcelona Mannequin, one of Dali’s most famous paintings. Dali admired the works of Velázquez, Vermeer and Raphael. But when asked in an interview about who were the great living artists he said, “Dali the first. No doubt.” However, he gives Picasso some credit — after himself. 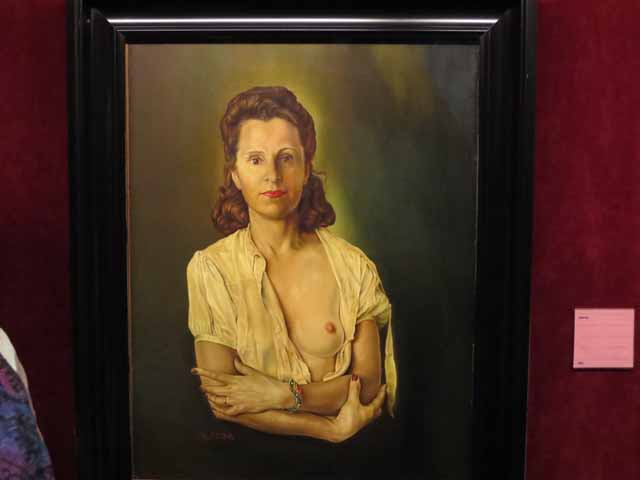 Much of Dali’s art deals with death and immortality, gold and money, and eroticism. Symbolism abounds — rocks signify strenth, bread represents feeding the mind, crutches represent weakness, eggs portray hope and love. Dali also painted portraits of his wife and muse, Gala, whose real name was Elena Ivanovna Diakonova. They met in 1929 and were married in 1958. “She was destined to be my Gradiva – one who moves forward, my victory, my wife”. (Gradiva was the title character in a novel by W. Jensen who provides psychological healing to Sigmund Freud.) 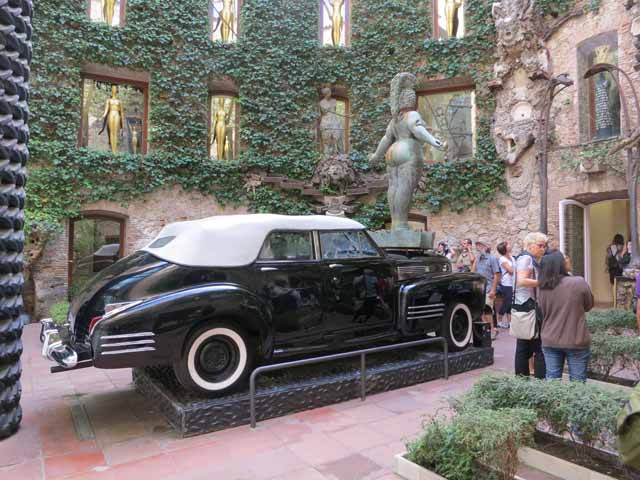 The installations inside the central courtyard of the museum were also designed by Dali to be core pieces in the museum.

There are two mannequins sitting in the back seat of Dali’s 1941 Cadillac, supposedly once owned by Al Capone. By inserting a coin, rain falls inside the car. The bronze statue on the Cadillac is of Queen Esther by Austrian sculptor, Ernst Fuchs, but it may be representative of Dali’s sister. 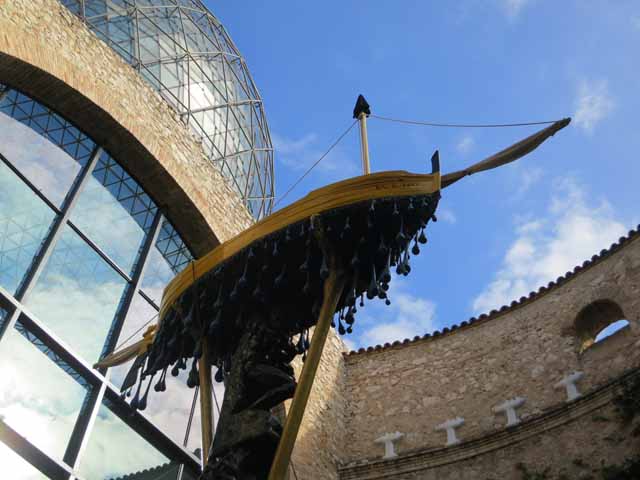 The boat above the patio was used by Dali and Gala and the blue condoms hanging from it symbolize tears. The geodesic dome rising above the building was part of Dali’s vision and was designed by Spanish architect Emilio Pérez Piñero. The dome is a key feature of the museum as well as a Figueres landmark.

In 1973, a British program, ITV Aquarius, produced a documentary filming Dali for three days at his home in Portlligat (near Cadeques on the Costa Brava) and at the museum while it was being constructed. He relished the opportunity to be center of attention and perform for the cameras. Inspired by my visit to the museum to watch a series of YouTube videos of this broadcast, I was fascinated by the parts filmed there as it was being constructed with Dali present, standing in this courtyard. On film, he mentions the tragedy of Piñero’s death in a car accident the previous summer. 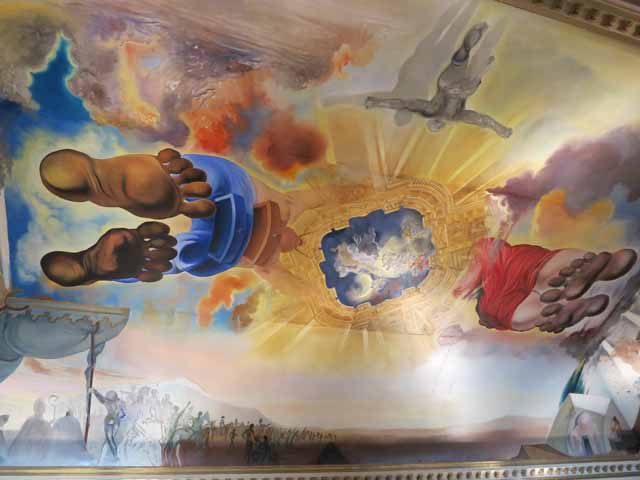 The most prominent features of this ceiling painting in the Palace of the Wind at the museum are the feet of Dali and Gala.

In the British documentary, Dali is shown climbing scaffolding to work on this mural. He carefully paints a definitive line, then dashes off a few more brush strokes before turning to the camera declaring, “Bravo! Bonjour!” It’s very entertaining. 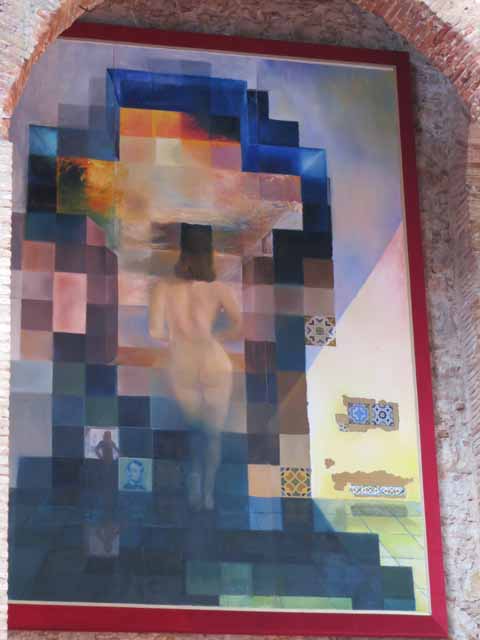 The photos directly above and below are different views of an abstract hologram in the museum’s foyer. The subject appears to be Gala in the nude until you view it from further back when it is a portrait of Abraham Lincoln. 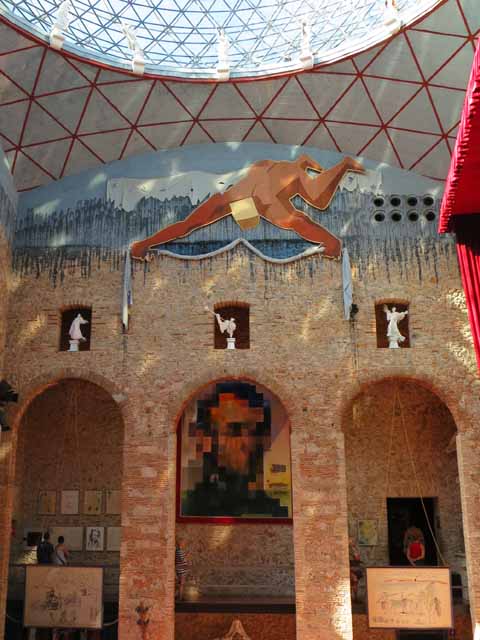 Gloria mentioned several interesting aspects of Dali’s life, including his time living with Gala in the United States from 1940 – 1948 and during later visits. He met many famous and powerful people, and developed relationships with celebrities like the Marx Brothers who he liked very much. In the British program I saw, he’s showing off a pair of socks given to him by Elvis Presley. He was interviewed on several television programs in the United States and appeared in an episode of I’ve Got a Secret in 1963 that I also came across on YouTube. 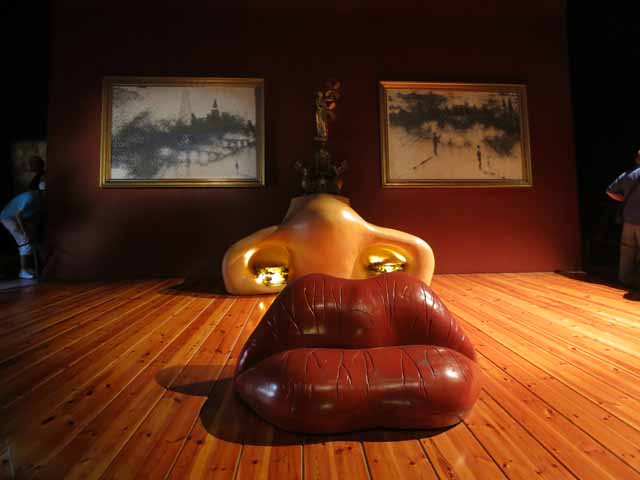 In this installation at Dali Theatre-Museum, he created a reconstruction of a portrait he did of Mae West in the 1930s. The elements representing her lips, nose, eyes, are framed by platinum hair which isn’t shown in this photo, unfortunately. On the same level as the exhibit, they look like individual pieces, as shown here. But from a platform above, the full picture is visible. 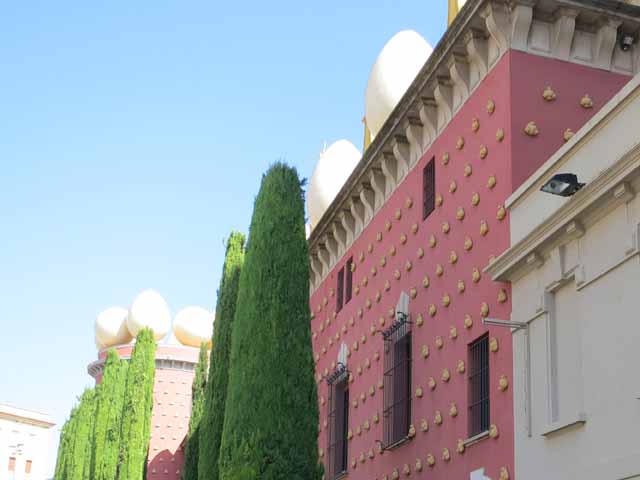 I am the first to be surprised and often terrified by the images that I see appear on my canvas. — Salvador Dali

Mr. TWS actually had a Dalinean experience that seemed almost like it had been orchestrated by Dali himself. He was taking photos of the building’s exterior while were waiting to enter the special Dali Jewels gallery adjacent to the museum. What must have been a very large bird decided to create some art of its own, splattering about a dozen droppings on the back of his shirt. Curiously, his shirt now looked much like the side of the building you see in the photo.

Is it possible that Dali was creating a Dalinian event?

What are your perceptions of Dali and his work? There is no wrong answer. As Gloria explained, in Dali’s art everything is a carnival — nothing is what it seems.