“Aren’t you going to eat?” I asked Nick. He is a 35 year old tuk-tuk driver in Phmon Penh where I live. In summary he is a combination of my personal chauffeur, a friend and a little brother.

“You go first,” he replied as he crumbled a beer tin, threw it under the table and popped another. Da, his mother, had been cooking all day and there was a feast in front of us. I picked up my chopsticks and tucked into the mango salad. Delish.

When I’m eating at someone’s house I do as I’m told, even though I don’t understand their reasoning. It was a lesson learned when I lived in Nigeria. At family meals there I would be escorted to eat in a bedroom with a young girl assigned to fetch and carry if I needed something. But she wouldn’t eat with me, even though food is served in communal bowls in West Africa. Why? As a white woman my status was too high to eat in the kitchen with the women, but not elevated enough to score a place at the table with the men.

Nick’s aunt Julia – her English name – was the only other woman who sat at the table to eat. She and her husband were visiting from Houston. The other women milled around near the open fire or fed the small children. More men arrived and joined us. Nick’s niece who studies English stopped by to say hello.

It took a while, but I finally sussed it out: Nick was waiting to make sure everyone had enough to eat – even though the food just kept coming – before he started. It was a massive meal. The sort that left me quietly belching into my krama (Khmer scarf). Todd – a photographer/teacher – who had also been invited commented on how spectacular the food was.

How we got the invitation

I’d arrived in the Kingdom of Wonder – as Cambodia is known – at the end of January 2013 with two friends from New Zealand. When the Nurse – as we call her because she is one – and Andrew returned ten months later, the former commented, “Andrew and I noticed that Nick has changed a lot since the last time we were here. You wouldn’t recognize it because you see him all the time. Besides you are a bit obtuse about these things, but your bossiness has been good for him. He has a lot more confidence.”

“Really?” I tend to lean on Nick rather heavily when I need things done or have to go some
where or need a translator. But I hadn’t thought about it as being “good” for him.

In conversation with the Nurse later that day, Nick casually mentioned “Jody and I understand each other now.” Translated that means “Even though this woman is eccentric and gets hysterical if we are going to be late I can handle her neurotic outbursts.”

Come to think of it confidence is how Todd and I ended up dining with the family. You have to have a certain level of it before you can invite foreigners into your inner circle and introduce them to your family. Da kept coming over and giving me hugs. We don’t share a common language, but warmth and hospitality don’t need words.

After he’d finished eating Nick leaned towards Julia and said, “Jody and I have a lot of work to do at the dump next week.” As the translator for the Down in the Dumps project I couldn’t do the work I do without him. I realized that reciprocity is a true partnership and Nick has taken on ownership of the project. 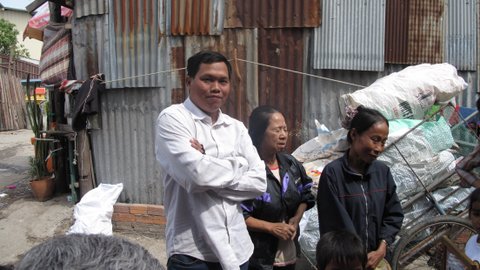 On our way back into Phnom Penh Todd noted, “That was simply amazing. We were the honoured guests. I’ve never been invited to a Khmer home for a meal before and it was very special.” I smiled. For me it was almost family dining. 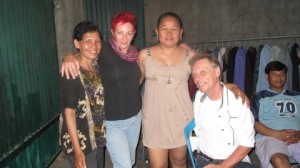