Visiting Prague you easily see why it is often called, “The Golden City of 100 Spires” — it is lustrous by day and radiant at night with a myriad of spires prominent on the city’s many churches and towers. It would be a treat to visit this historic city any time of year, but I’ve now been there twice – each time in winter. Even on those cold, brisk days, I was captivated by Prague’s beauty and fairytale ambiance. 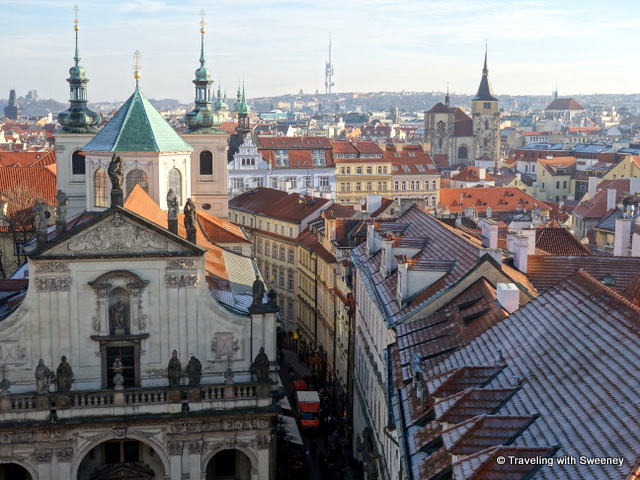 On our first visit to Prague in 2011, we loved the Christmas markets at Old Town Square and Wenceslaus Square and were eager to repeat the experience. Since we also felt that there was more of Prague to see than we were able to cover on that short trip, we put it on our itinerary for December 2013, making it our final destination following visits to Budapest and Bratislava.

This time, we selected the Four Seasons Prague to be our base and it proved to be a gem for many reasons.


The moment we entered the hotel, we got a sense of the kind of stay we were about to experience. On the cold winter’s night after a short walk from the Metro station, it felt cozy arriving at the hotel to warm welcomes in the lovely lobby, elegantly decorated with holiday touches. 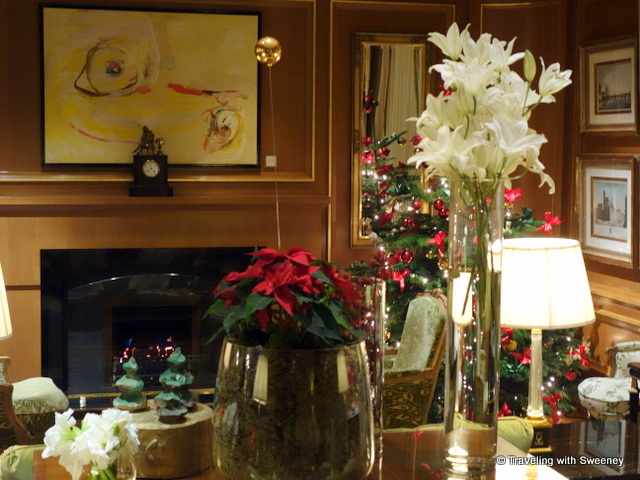 I seem to make a habit of arriving at Four Seasons hotels tired, hungry and disheveled from the journey. Friendly staff like those at reception in the photo below make me feel like an old friend and frequent visitor. I particularly remember Eleni (not in the photo) who checked us in and then enthusiastically escorted us to our room, insisting on taking my large and heavy computer bag which I often have strapped over my shoulder. 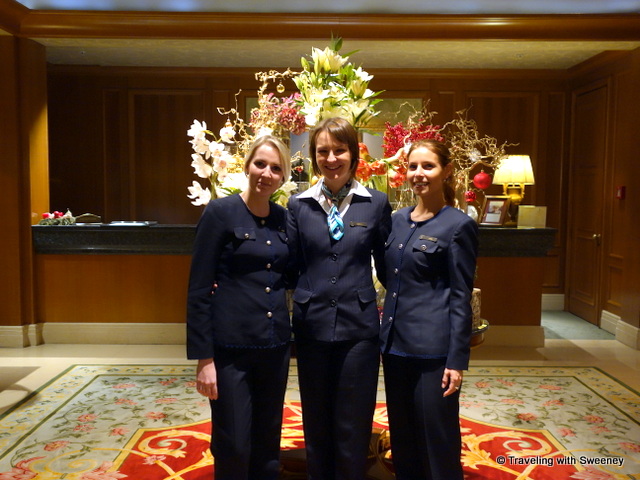 We had a nice time talking with her about the hotel and she seemed genuinely interested in hearing a bit about us and our travels. Entering the room, she smiled and asked, “How do you like your room?” eagerly awaiting our response which was that it was absolutely lovely. That was our first impression,  and I grew to like it even more the longer we stayed. 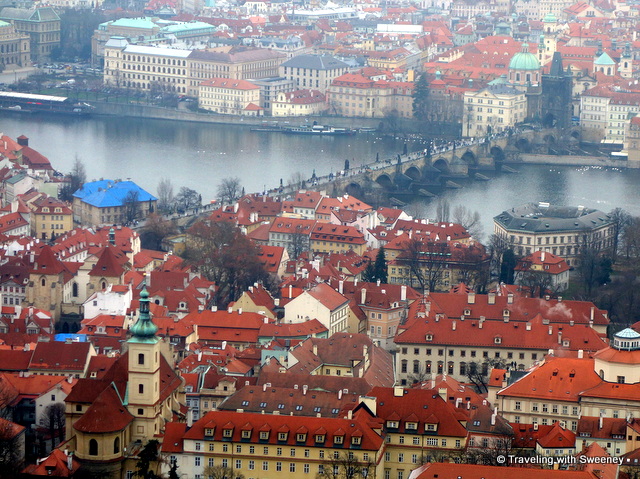 For perspective, the Four Seasons Prague as viewed from across the Vltava (just a short distance to the left of the Charles Bridge)

Just a five minute walk from the Staroměstská Metro, right on the Vltava River near Old Town Square, the Charles Bridge, and many other key sites, the Four Seasons is ideal for enjoying a visit to Prague. It’s less than a 10 minute walk to Old Town Square and one of the most beautiful Christmas markets in Europe. Actually, Mr. TWS is of the opinion that there is no question about that. It’s also a short 25 minute scenic walk from Prague Castle on the other side of the Vltava. 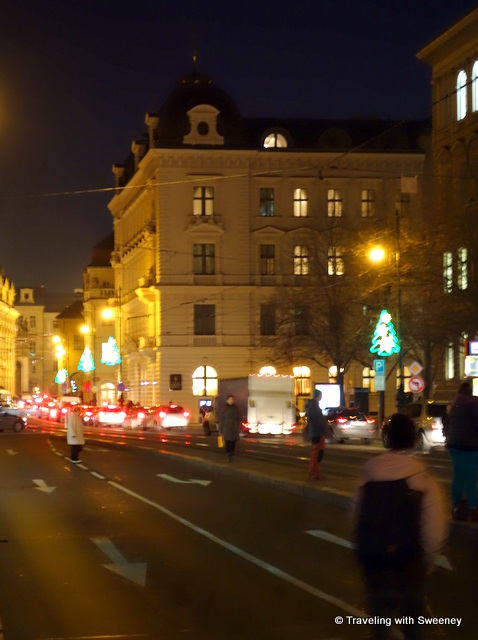 We spent a good part of our days walking around the city seeing the sites, taking in the gorgeous vistas, and getting our share of Czech food and drink. It was nice to get back into the hotel at the end of the day to freshen up before heading back out to capture the magical night scenes of Prague and stroll through the Christmas markets.

The architecture of Four Seasons Prague has wonderful distinctive historical details that I feel exude the character of the city. 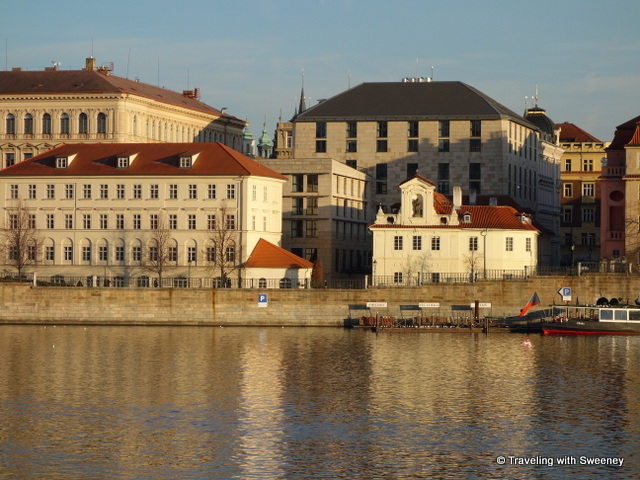 The property consists of four buildings, three from the 18th and 19th centuries and a modern building connecting them. The oldest is the Baroque House built in 1737 (the lower building on the right above).The Neo-Classical House (4-level building shown on the left), was originally a factory, later apartments, then offices in the 1960s. The Neo-Renaissance House was originally designed in 1883 for apartments and is not quite visible in the photo above beyond the Modern Building connecting them all.  My dream would be to stay in the Presidential Suite which takes up the entire second floor of the Baroque House and has stunning views across the river of Prague Castle and Malá Strana (Little Quarter). 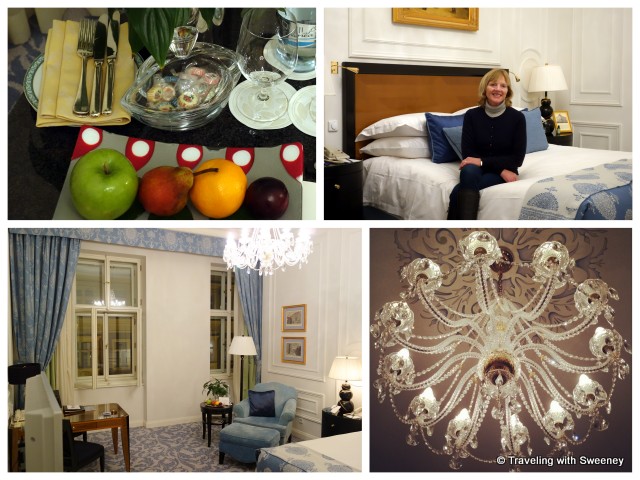 We stayed in a Renaissance Room which I thought exuded a soothing elegance with the light blue color scheme and finely-crafted paneling and molding. I was particularly taken with the Bohemian crystal chandelier and the ceiling designs that were hand-painted by local artists.

I’m always happy when I’m in a room with lots of windows that actually open. Yes, even in the winter, I like to open them, listen to the sounds of the city and breathe in the fresh air for a bit. Our room overlooked Křižovnická Street (some rooms overlook the Vltava), which although it is a fairly busy street  our room was very quiet.

The hotel restaurant, CottoCrudo, met our expectations of fine cuisine and comfortable ambiance as we’ve experienced in other Four Seasons hotels. I loved the bright, open space of the restaurant with ample windows letting in natural light. Each morning, we were lucky to get a table by the windows facing the Vltava River with a glimpse of the Charles Bridge and Malá Strana. Although the weather was partly cloudy during much of our time in Prague, on our first day, we were treated to glorious sunshine and a bright clear day.

Breakfast has many choices of pastries, fruit, breads, cheese and meats as well a selection of an entree. I’m very selective about ordering Eggs Benedict — it can be so disappointing in restaurants — but I order it without hesitation in the Fours Seasons and have never been disappointed. Mr. TWS, who doesn’t eat meat, also was able to enjoy it with salmon instead of ham. 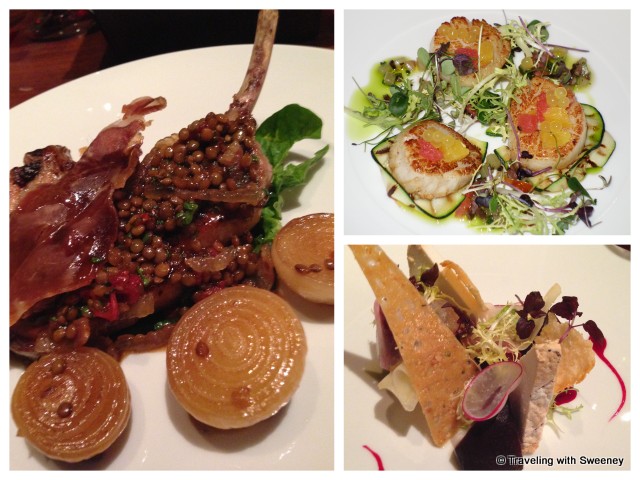 A special treat was dinner at CottoCrudo (Italian for “Cooked, Raw”) where, under the direction of executive chef Richard Fuchs, “urban Italian” dishes are served. The restaurant has a raw bar (Crudo Bar) with traditional sashimi, mozzarella, salami, prosciutto and other fresh food. The nighttime setting of the restaurant is stylish, but not pretentious. It was quite romantic sitting in a booth along the side of the restaurant, while we indulged in a few courses of beautifully presented and delicious antipasti, entrees and dessert. 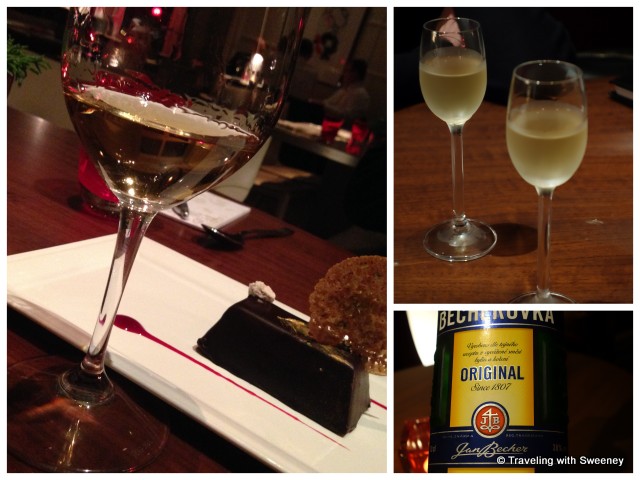 To cap off the meal, we each had a nice glass of Karlovarská Becherovka, traditional Czech spirit with a unique taste that has been produced since 1807 in Karlovy Vary. It is produced from a secret recipe mixture of herbs and spices and is said to be good for stomach aches. It made me feel quite warm and satisfied — enough so that we decided to go back out and for a walk across the Charles Bridge in the moonlight.


You probably know that I appreciate the artistic touches of places I visit. The art collection exhibited throughout the hotel and in the rooms, includes old lithographs of Prague as well as modern abstract paintings displayed tastefully throughout. I particularly enjoyed the sculptures and beautiful glass objects created by prominent Czech artists. The art, floral arrangements and Christmas decorations tastefully complemented one another. 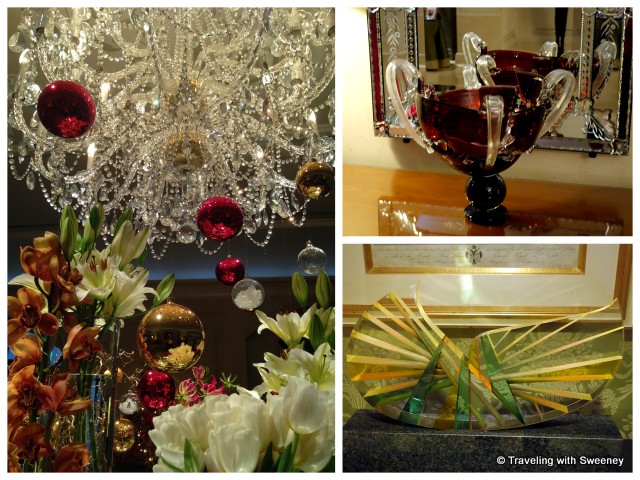 While admiring the sculpture by Lea Vivot of the young couple (shown below) at the entrance of the Four Seasons, Mr. TWS thought that I looked like I was offering them relationship tips. Me? Offer advice? 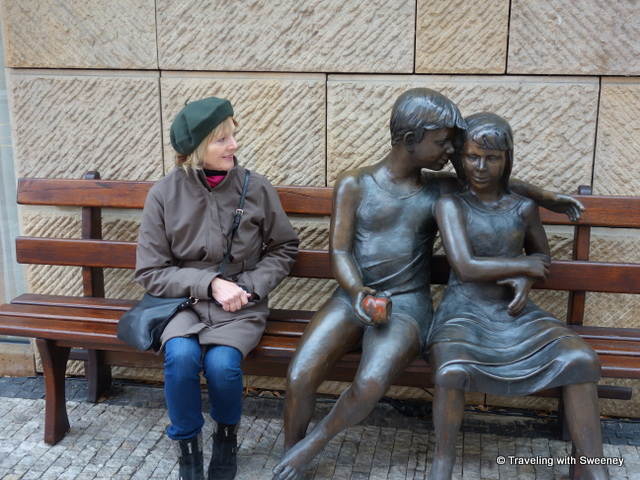 Offering my advice? Sculpture outside of Four Seasons Prague

So this was our base — our elegant, quiet place to plan our days, indulge in fine cuisine and relax in our rooms. From here, we took in as much of Prague as we could, up early and back late — even though it would be so tempting to stay in and luxuriate in our Renaissance Room. But time always seems to go by extra fast when we’re traveling, and before we knew it, we were reluctantly leaving the Four Seasons before sunrise and being whisked away by taxi to the airport. 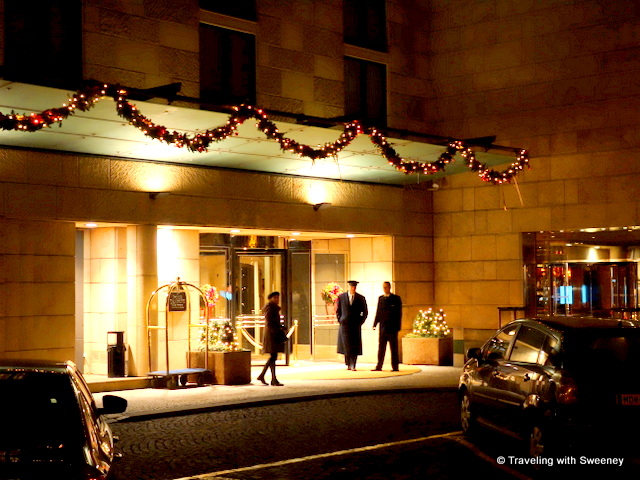 Now I’m wondering — in which season should I return to Prague?

Disclosure: A portion of our visit was hosted by the Four Seasons Prague, but our opinions are based on the quality of service, comfort and amenities that we personally experienced.

30 thoughts on “A Gem for All Seasons: The Four Seasons Prague”