Before vacationing in Barcelona this past July, I’d never heard of Antoni Gaudí i Cornet (1852-1926), a Catalan architect considered a master of Modernism. If you’d asked me what Gaudi meant to me, I would have said it meant “brilliantly or excessively showy” (as in “gaudy”, not related to Gaudi since etymologically, “gaudy” dates back to the 1500s.) I love architecture, but know nothing about it.

I think it’s easier to discover and truly appreciate something if you know nothing about it beforehand. With no expectations, one cannot be disenchanted. When I went to see the Blue Mountains north of Sydney a few years ago, it was advertised as the Grand Canyon of Australia. Well, having already seen the Grand Canyon, I’d say one should go to Australia before Arizona and not the reverse if one doesn’t want to be disappointed. (Size does matter, by the way, as the Grand Canyon in Arizona is about 10 times bigger than the one in Australia.) But back in Barcelona, Gaudi was free to impress me fully as he had no prior effect on me. 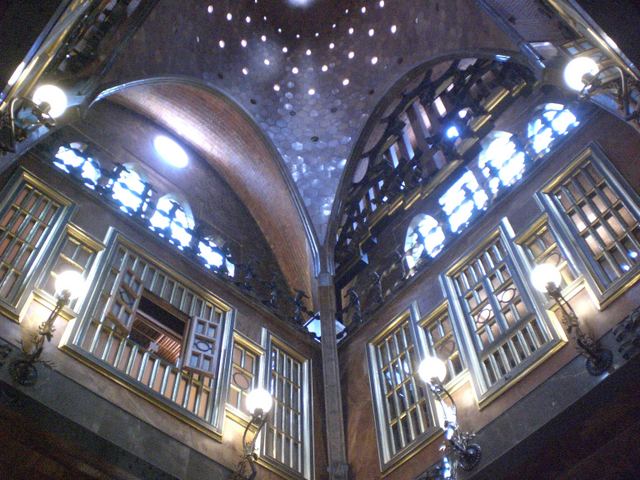 I visited three of Gaudi’s houses in addition to the church of Sagrada Familia. I started with the Palau Güell (1890), going in reverse order as what was recommended in my guide book because it was Sunday and the entrance was free. (Call me cheap, but have you seen the exchange rate for the Euro lately?). Chronologically, one should start with the Palau Güell because it is an earlier work than his more famous houses like the Casa Mila (1910) or the Casa Battló (1904). But one should not ignore it as it would be a monumental mistake.

I have visited many palaces over the years, from Versailles to Schönbrunn to Windsor, but nothing came close to the magnificence of the Palau Güell, maybe because I wasn’t expecting it (one expects Versailles to be magnificent after all.) The entire building (6 or 7 stories high, like all of the houses I visited) displays a stunning clash of forms and media, from spiraling spires to an open ceiling made to resemble the night sky, with wood and metal and glass entwined into forms one more majestic and intricate than the other. I was astonished by the delicate woodwork juxtaposed against harsh stone in such harmonious contrast. 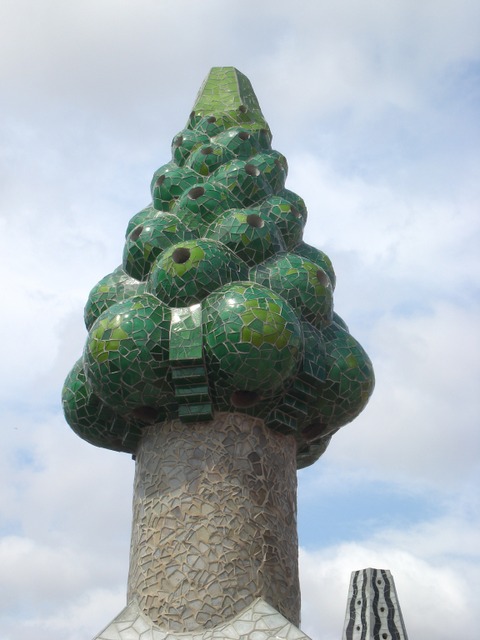 One of Palau Guell’s distinctive chimneys

And then I reached the roof, which welcomed me with its inimitable uneven floor that follows the shape of the attic, and distinctive chimneys atop each of the 20 fireplaces in the palace, one more elaborate and exceptional than the other. By the way, if you don’t appreciate mosaics, you should skip all of Gaudi’s houses.

The next day, though it was raining, I headed toward the Sagrada Familia (Holy Family), Gaudi’s quintessential, yet unfinished masterpiece. 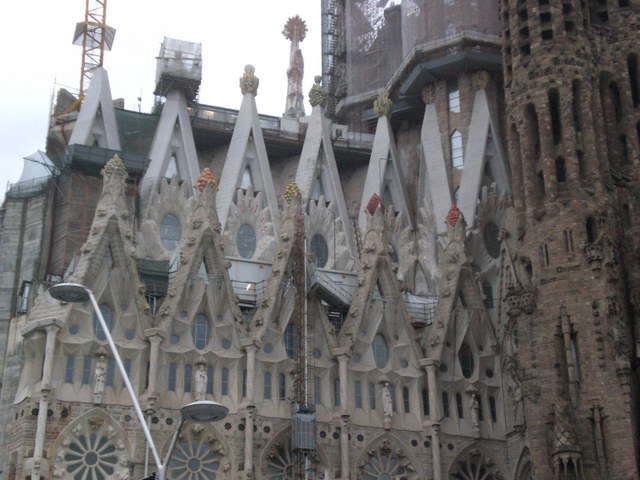 Its massive size dwarfs all the buildings around, and surpasses most cathedrals around the world. The exterior is an amalgam of holy scenes envisioned by Gaudi, most of them achieved by other artists since his death. 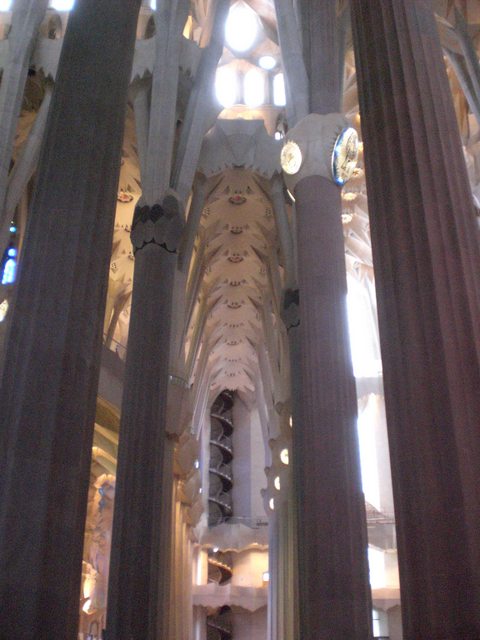 Around every corner, through every passage, at the top of every column, one can clearly see the influence of nature in Gaudi’s colossal design. The pillars are made to resemble trees, and one is to feel as if they are walking through a forest; the supports twist and turn in visionary fashion, at death-defying heights. The stained-glass windows tell a tale of color and passion, meant to enthuse and awe-inspire. 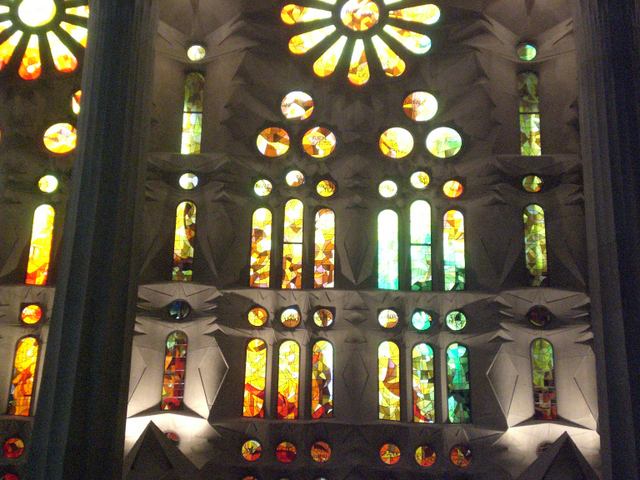 The museum underneath retraces the story of the still incomplete church, from its inception to its current state, and should not be missed. The projected finished date is 30 years away. 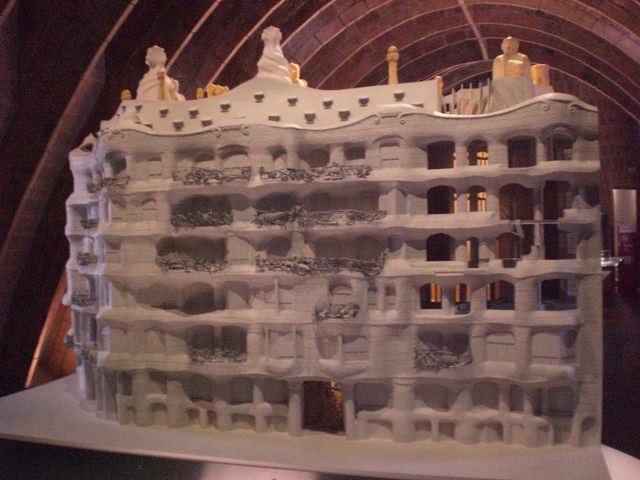 As the building was undergoing renovations, I was unable to admire the uniqueness of Casa Mila’s façade first hand and had to contend with postcards and a scale model (see picture). But the interior and the roof were sufficient enchantment to quench my newly-found thirst for all things Gaudi. Though not as spectacular as the Palau Güell in my view (my guide book and I strongly disagree on this point), it was another display of curves and angles I had never seen before. 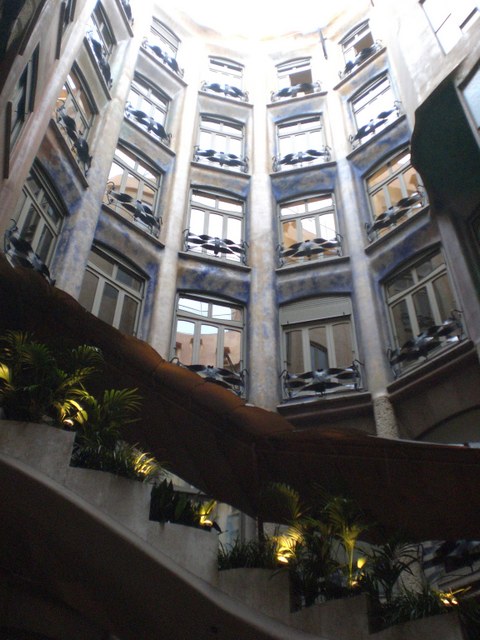 What makes Casa Mila a genuine architectural masterpiece is the fact that there are no load bearing walls; the building, including the façade, is supported by a structure of columns and curved iron beams surrounding an open courtyard from the lobby to the attic. Inside, there again stone meets iron in the most elegant way throughout the many floors. 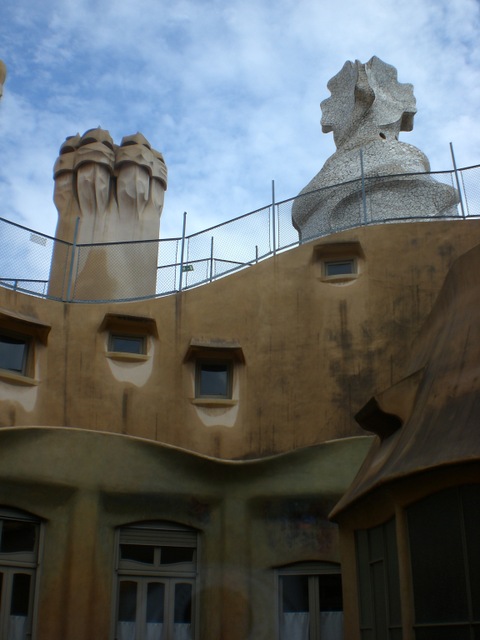 One of the most interesting features is the attic, where the laundry room was located. Built with catenary arches, the attic was designed to allow maximum air flow, which allowed cool air to circulate freely and bring much relief to workers in the sweltering Catalan summer. There, too, the roof offers a ballet of shapes, textures and colors, topping every fireplace with a unique chimney, over a once again uneven floor espousing the shapes of the arches in the attic below.

One can only marvel at the exterior of Casa Battló, giving the building a very unique feeling mixing bone-looking pillars and wavy balconies. 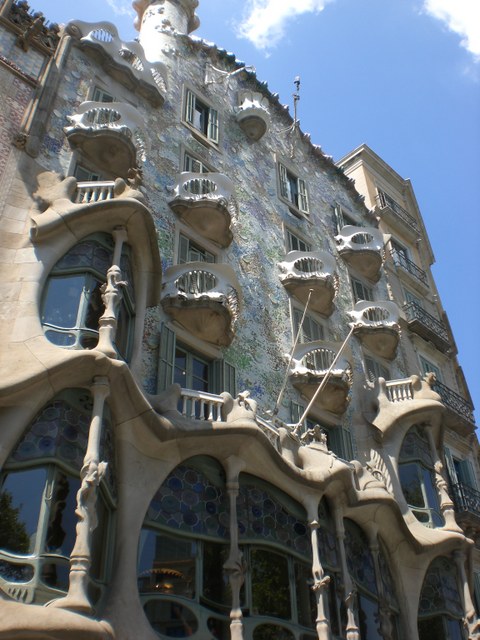 There isn’t one straight angle to be found inside Casa Battló. Every door, window frame, wall, staircase or hallway is curvy, and meant to provide a maritime feeling with waves of peaceful color and sensation. The staircase wraps itself around a central elevator, with empty wells of light on either side, which, covered with blue tile, lighter toward the ground, darkening toward the upper floors, supply luminosity to the entire building. 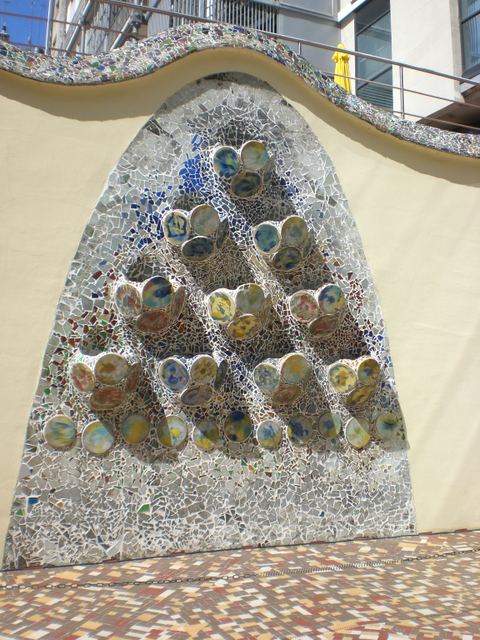 On the second floor terrace of Casa Battlo

Much like Casa Mila, the roof draws in many visitors eager to see the dragon design and the stacks of chimneys. On the way to the roof, one must pass by the attic, containing a series of 60 catenary arches representing the ribcage of an animal, which many believe to be that of the dragon on the roof. 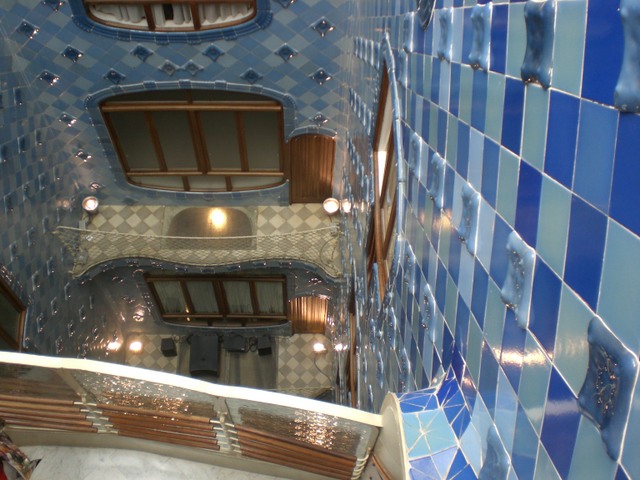 There are many more Gaudi splendors to see in Barcelona, including the famed Park Güell, and I wish I’d had the foresight of booking two extra days, so I guess I’ll just have to go back. 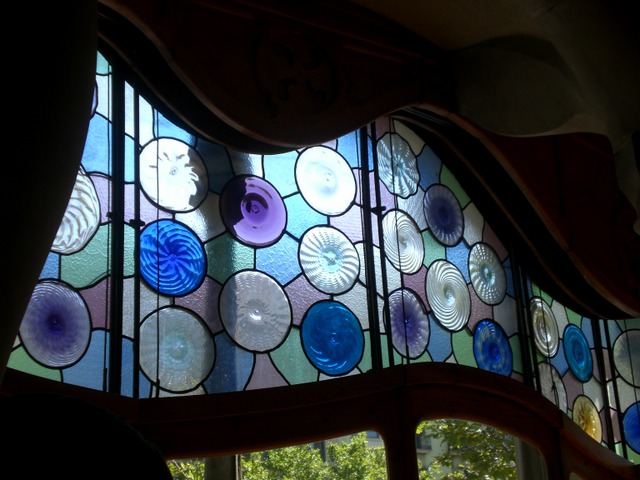 In the meantime, I brought back so many Gaudiesque souvenirs, from a mosaic spoon rest to a kitchen towel to a lampshade, that my house is slowly Gaudifying. I could eventually have a yard sale, I guess, except that I would never part with my newly acquired treasures. Maybe I’ll open a museum, then …

Have you seen any of Gaudi’s buildings in Barcelona? What are your impressions?

10 thoughts on “Discovering Gaudi in Barcelona”