Sometimes the best journeys are those decided on the spur of the moment with little planning. One of our favorite serendipitous trips was to start the Christmas holiday in London and Paris last December. It was a great way to get into the Christmas spirit. 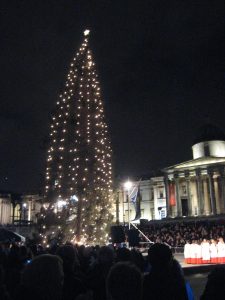 Things to Do on a Christmas Holiday in London

We arrived too early for check-in at the Park Plaza Sherlock Holmes on Baker Street, so we dropped off our bags and hastened to Oxford Street. This area of London’s West End is known for its imaginative holiday lights stretching across the street, eclectic displays (some live), and decorations in the flagship stores and small shops. We window-shopped and also spent time at Selfridges, the largest department store on Oxford Street famous for its creative Christmas window designs. A light rain made it all the more cozy when we took a break for lunch at Henry Holland, a pub on Duke Street. After checking in to the hotel later that afternoon, we caught the tube at the London Underground Baker Street station for the Christmas tree lighting ceremony at Trafalgar Square, which was one of the highlights of our trip. Norway has been giving the people of London a tree each year since 1947 in gratitude for British support during World War II. We were part of a large crowd standing near Trafalgar Square Fountain behind the staging area where we had good views of the procession of the Mayors of London and Oslo, Lord Mayor of Westminster, and the Choir of St. Martin-in-the-Fields. The spirits of the crowd were high as we waited for and then watched the lighting of the tree, decorated in traditional Norwegian style with vertical strings of energy-efficient lights. As the choir sang carols, many in the crowd, including us, joined in heartily. 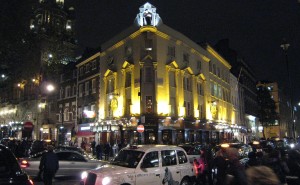 After the ceremony, we joined a bustling crowd in Covent Garden, passing the London Coliseum where theatre-goers were heading for a performance of Messiah. Further along St. Martin’s Lane, we found the cheerfully decorated Angel and Crown pub, and were lucky to get a table by the window to watch people hurrying along to parties, dinner and the theatre.

We didn’t make it too much of a late night since we had to be up early in the morning to take the Eurostar to Paris, but would be returning in just a few days (previous posts related to the two days in Paris are linked at the bottom of this story). 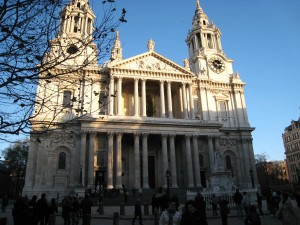 Arriving back in London at St. Pancras Station on Sunday afternoon, we quickly checked in at the hotel and headed to St. Paul’s Cathedral for the Evensong service. We sat as close as we could to the Cathedral Choir, enjoying the beautiful singing and service. From the spiritual and serene setting of St. Paul’s, we hurried to the nearest tube station for a ride to the Knightsbridge area, where we emerged on Brompton Road which was full of shoppers and bright with lights.

The immense Harrods department store was impressively decorated with green lights running the full length and width of the building. Although it was almost closing time, it was still quite busy as we browsed through just a few of its many fashion departments and gourmet food sections. Pet-owners would enjoy the pet department that was complete with upscale pet furniture, glamour accessories, bakery items, and Bowser Beer (non-alcoholic)–all for the dogs! Descending the escalator we heard the “Drinking Song” from La Traviata and were very pleasantly surprised to see it was a live performance by an opera singer facing us on a balcony to our left. Now it was time to find a pub for food and drink. Just a short distance from Harrods was The Tea Clipper where we also felt the holiday spirit and I had one of my favorite English dishes, Homemade Cottage Pie. 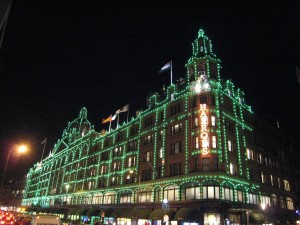 We wanted to squeeze as much as we could from this whirlwind holiday in London because we’d be flying home to San Francisco the next morning. So we decided on a circuitous route back to the hotel taking the tube to Waterloo Station. After meandering down a few dark and unfamiliar side streets, we came upon South Bank, one of my favorite areas of London on the south side of the Thames.

Turning east, we strolled past the Millennium Bridge (a pedestrian walkway) with a direct view of St. Paul’s across the river, the Tate Modern, the Globe Theatre, and Southwark Bridge. We made a nostalgic stop at the Old Thameside Inn, a pub we had visited on previous trips to London. From there, we walked past Southwark Cathedral, London Bridge and the HMS Belfast toward Tower Bridge, always a lovely sight especially lit up at night. Crossing the bridge brought us to the Tower of London and Tower Hill Station for the final tube journey back to the hotel. 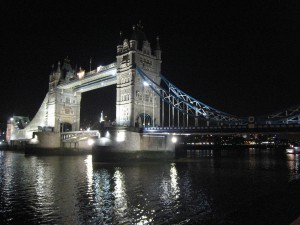 Before heading to our room, we couldn’t resist stretching our day just a bit spending a few minutes in the lobby lounge. Sitting near the windows facing Baker Street, we were already reminiscing about our quick, but eventful time in London. It was the end of our holiday in London, but a great start to the holiday season!

23 thoughts on “Holiday Kick Off in London”