Is there solitude for loners on a cruise?

Ever since my book Party of One: The Loners’ Manifesto was published over ten years ago, emails have arrived regularly from loners seeking advice on how to weather this crowded world without losing their unsociable, solitude-seeking souls.

They ask about careers. (Avoid teeming offices; consider software development, zookeeping and astronomy.) Relationships. (For best results, find your own kind; they are often hiding in kitchens at parties.) And travel: where to go and how to get there without being mobbed, menaced or mocked by strangers who assume that solo travelers are lonesome, pitiful and shy.

I have told wanderlusty loners to rent cottages behind locked gates. To hike alone or with co-loners close enough to cities to call 9-1-1. I have suggested checking into certain hotels all alone. Never did I suggest a cruise.

That’s because cruises have a reputation that precedes them. We’ve all heard of long lines coiling through midnight buffets. Sunbathers glistening shoulder-to-shoulder in deckchairs. Bars where the karaoke never stops. Dance floors, swimming pools, a casino, a theater, and thousands of potential new best friends: Crowds reveling, relaxing, happy, but crowds nonetheless. A floating social scene, a virtual “No-Loner Land”. Or so Love Boat and cruise-line ads would have us think.

Solitude on the Solstice

At long last I wanted to know firsthand, and booked a stateroom on the Celebrity Solstice which was set to depart Seattle, sail up the Juan de Fuca Strait then return to Seattle last week. 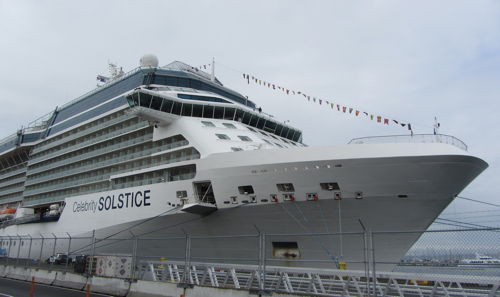 Just knowing that this vessel can lodge nearly 3,000 passengers gave me the shakes. I pictured all 2,850 of us jostling in the same corridor, overturning each other’s Cosmopolitans with our tubes of sunscreen. This anxiety ebbed once I saw the ship. At 1,041 feet long and fifteen decks high, it’s a towering monolith — a skyscraper that just happens to float. I’m no math whiz, but the existence of ten restaurants and fifteen bars on the Solstice suggests that you can almost always find a table all to yourself. My challenge was this: Can even the most lonerish loner, just a few smiles short of a cave-dwelling hermit, scope out sweet solitude on a ship this big?

Start with a no-brainer: your stateroom. Boasting a lushly dressed bed and sofa, compact but elegant restroom, flatscreen TV and furnished balcony deftly divided from its neighbors on all sides, it’s privacy personified. Nonstop sea views make those deck chairs (or deck tub in select rooms) the best seats in the house. 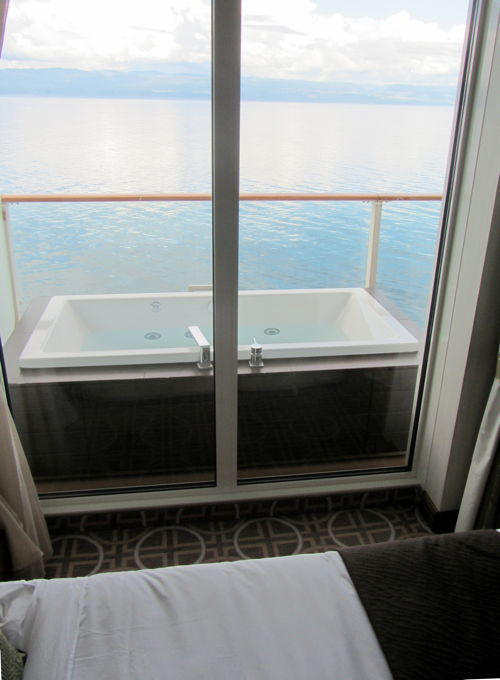 View from the stateroom (this one with a balcony tub)

Perhaps because most passengers hadn’t yet consumed enough calories to start worrying yet, the eleventh-deck exercise room was nearly deserted just before dusk. Its treadmills are positioned up against the starboard windows for maximum viewing excellence. I had run half a mile when a humpback whale swam slowly past — pausing to breach and (I swear it) wave. Who would have thought to bring a camera into the exercise room?

Because it was raining — Seattle, duh — nearly everyone else stayed indoors and we had the outside decks nearly all to ourselves.

Inside the ship, Mister Loner Husband and I saw the crowds for which cruise ships are known. I would wager that many if not most veteran cruisers gravitate toward on-board crowds, enthralled and deliberate, as if this was why they had embarked in the first place. Some sociologist or statistician could probably calculate the formulae by which crowds grow, or stay the same size albeit with ever-changing occupants. Some of the on-board bars were packed with partiers, but we found Michael’s Club, a quiet, old-fashioned one that looked like a place where Arthur Conan Doyle might sip sherry while stroking a lurcher. Good news for us! 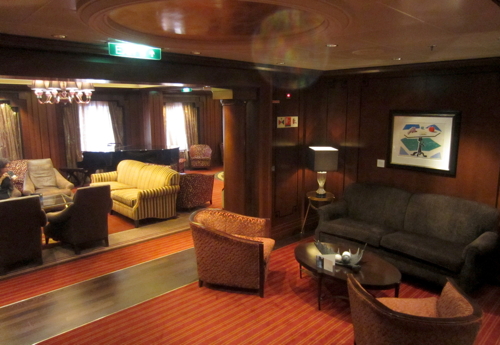 We never found the buffet all that crowded, probably because it kept such long hours, staying open continuously from 6 a.m. to 1 a.m. The Solstice houses several dining venues, including Asian and French restaurants, a burger bar, a bakery-café, the glamorous Grand Epernay main dining room, and (for those lodged in health-oriented AquaClass staterooms) the chic exclusive Blu. 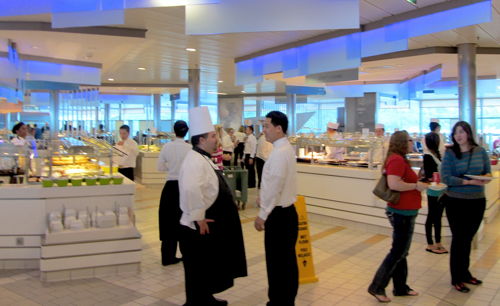 There is also excellent room service, aka God’s gift to loners. 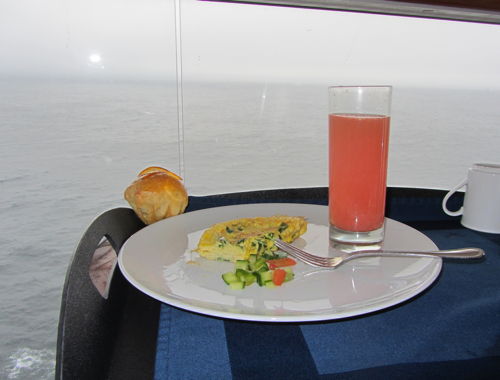 The fifteenth-deck Lawn Club just begged us to stretch out on it with sundaes from the gelato bar, once the sun came out:

Here and there even amidst the densest and most avid crowds, we found little aeries and refuges — such as this tent-chair in the relaxing solarium. 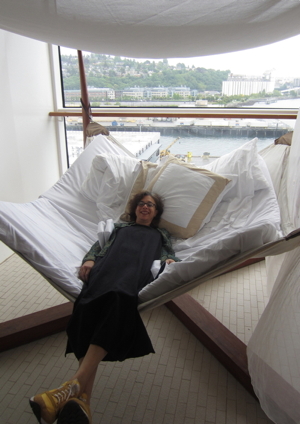 Relaxing in a tent chair

And this plush curtained hideaway behind the stairs: 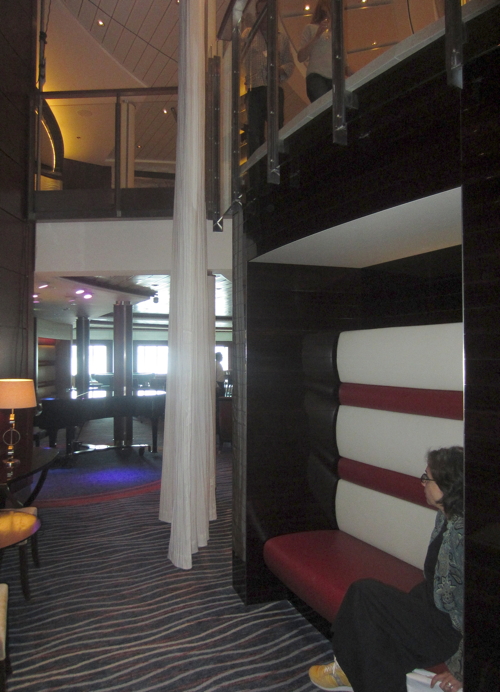 Life of Pi or Mutiny on the Bounty, anyone? The Solstice has a luxurious two-story library overlooking a dance floor. Its books span many genres and languages. This might be the most surreal swatch of square footage anywhere on the open sea. 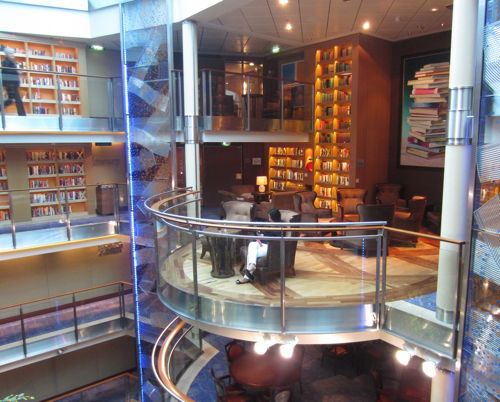 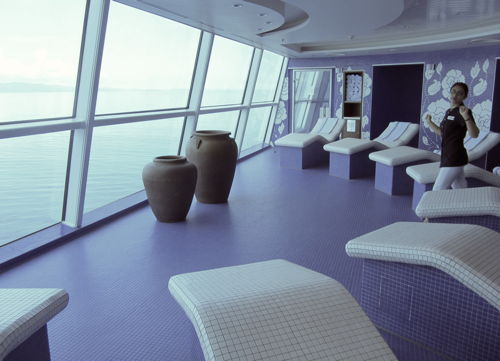 I thought: Okay. Loners can definitely cruise. We have to scout around a bit. We have to claim our territories. We have to time our activities adroitly. Breakfast at 6:10 or 11:43 a.m., say. Lunch at 3:36. A trek on the treadmill before dinner at 10:21. Sandwich in a bit of library, a bit of lawn. Claim a cubicle and go online in the iLounge: 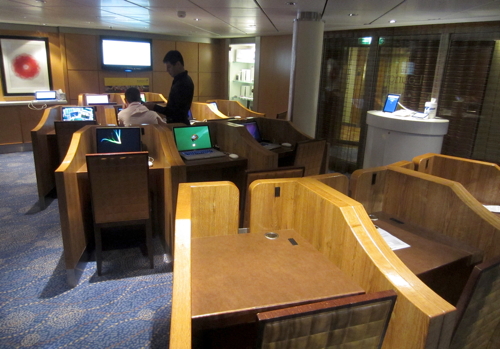 I was thinking this while wandering the foremost portion of the eleventh deck. Suddenly, without warning, near the foot of a mysterious spiral staircase, I encountered a narrow hallway. At its far end stood glass doors and, beyond them, a room which spanned the very front section of the deck, its floor-to-ceiling windows granting monumental views. Firm sofas were arranged side by side, facing the windows. 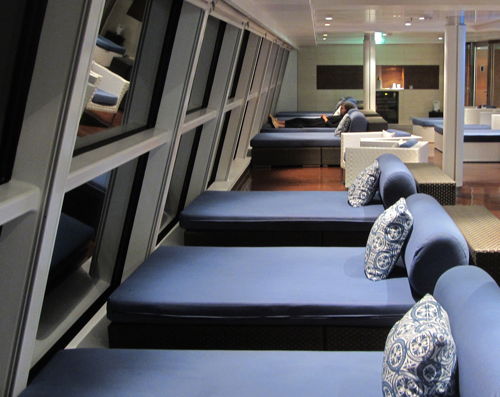 Sofas with a view on Celebrity Solstice

This room, which had no name, was the waiting room for passengers who had spa appointments, but one need not have a spa appointment in order to use the room — which was nearly empty throughout the entire cruise, and nearly silent save some soft trance-y music whose volume could be adjusted to suit anyone’s taste. I decided to call it the Paradise Room. 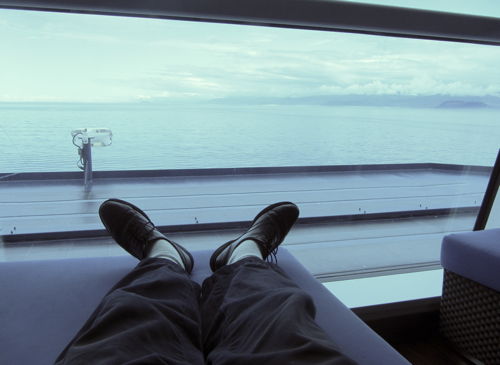 Lying on one of those sofas as the ship cleaved the sea far below felt like flying, feet-first. Staring straight ahead into sea and sky, glancing fleetingly sideways at the distant, ever-receding shore, I realized as two hours melted into three that this was just like life. Even while lying absolutely still you glide ahead inexorably. Scenery slips past. You do not want to close your eyes, knowing how much you’ll miss. And onward, ever onward you go, marveling that you cannot look back.

All photographs illustrating this article are by Kristan Lawson, used with permission.

Anneli Rufus is the author of several books, including Weird Europe, California Babylon, and Party of One: The Loners’ Manifesto.

To cruise or not to cruise — what do you think?