A glimpse of Nuremberg on a Danube River cruise

A cruise along the Danube River offers many opportunities to see beautiful scenery and sights, reflect on dramatic history, admire centuries of art and architecture treasures, and enjoy cultural festivities.  During our Viking River “Romantic Danube” cruise, we took in these highlights in several cities along our route that began in Nuremberg, Germany. 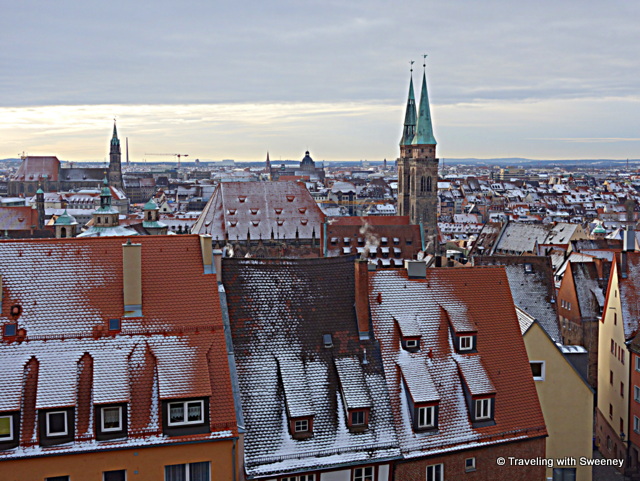 View of Nuremberg from the Imperial Castle

Because this was our first visit to Nuremberg, the morning guided tour (Viking’s included shore excursion) was a perfect introduction to the the city’s historic sites before we set off on our own to visit the famous Nuremberg Christmas Market. Our local guide Claudia was knowledgeable and fun (characteristics we consistently found in the Viking guides on our cruises). These are a few of the scenes from our short visit.

Nuremberg, the second largest city in the Bavarian region of Germany (Munich is the largest), is known by most people for both its dark Nazi history as well as the war-crimes trials that followed World War II and brought leaders of the Third Reich to justice. The Third Reich chose Nuremberg for its rallies in the 1930s because Hitler agreed with the mayor of the city who said that Nuremberg was the “most German of German cities.” 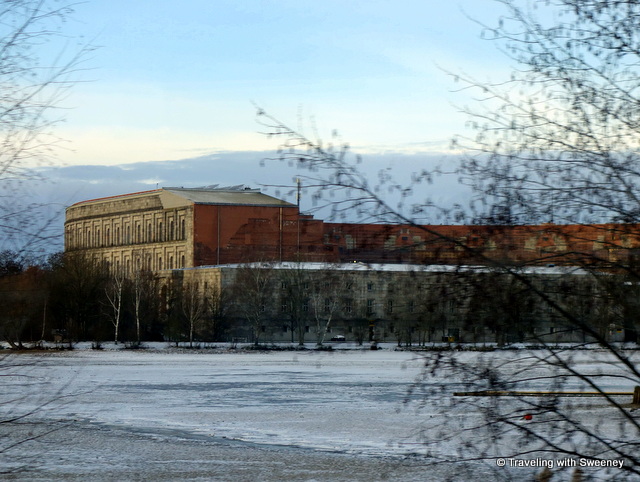 Congress Hall, built on the scale of Rome’s Colosseum

Our guided tour took us by coach to several important sites of World War II and Hitler’s rise to power, including Zeppelin Field (former Nazi Party Rally Grounds), Congress Hall (built on scale of Roman Colosseum), Documentation Center (a Nazi propaganda center), and the Palace of Justice (where the Nuremberg trials were held in courtroom 600). It is chilling to see the place where throngs of Nazi fanatics cheered Hitler and his henchmen in the huge rallies held on the grounds in the 1930s. 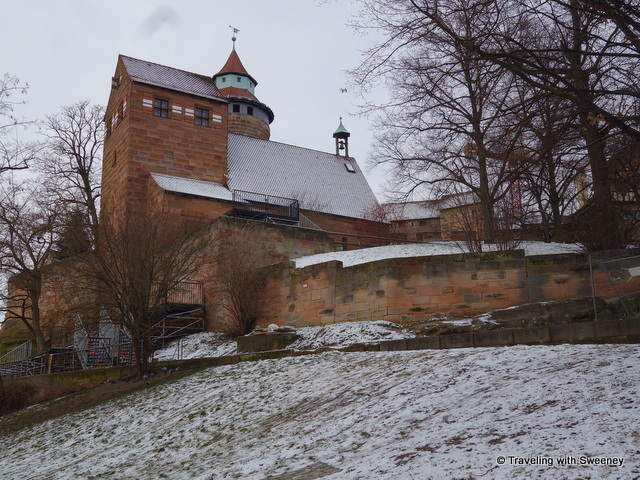 The Imperial Castle above Nuremberg was one of the most important fortified palaces of the Holy Roman Empire. As we walked the cobblestone path on the bridge over the castle’s moat, our guide provided an interesting fact about its design. It was curved to deter enemies from easily attacking the gate with ramming devices and curved counterclockwise so that approaching soldiers who were predominantly right-handed had their sword side toward the wall (i.e. the defender’s vantage) and their shield side away from the wall. 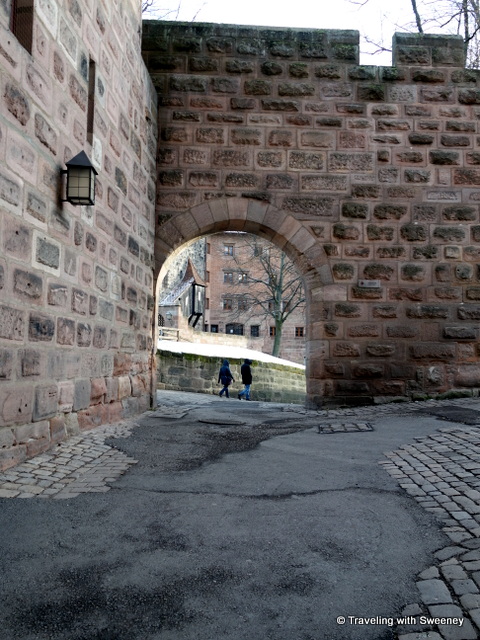 Inside the fortress of the Imperial Castle

The castle, as well as other key buildings and churches, were largely destroyed by Allied bombings during the war, but were mostly rebuilt using original stone. 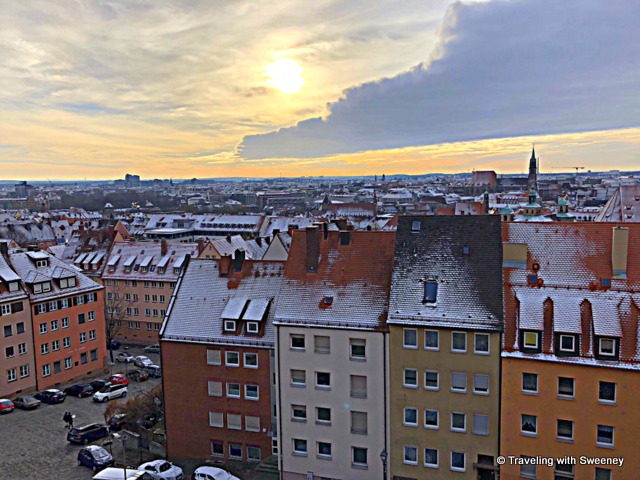 Another view of Nuremberg from the Imperial Castle

The view from the castle courtyard over the steeples and snow-covered rooftops of Nuremberg is spectacular (shown in photos above and at the top of the post). 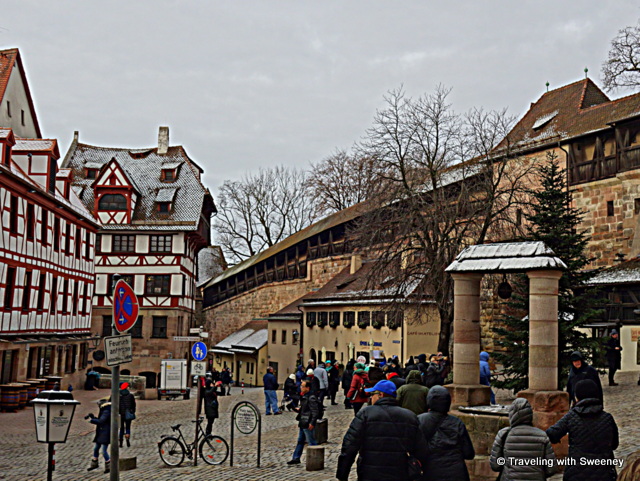 From the castle, we descended the hill around the fortress walls toward the city center, passing through streets lined with excellent examples of medieval half-timbered houses (easily identified by uneven lines and imprecise construction as you can see above), shops, inns, and charming squares. 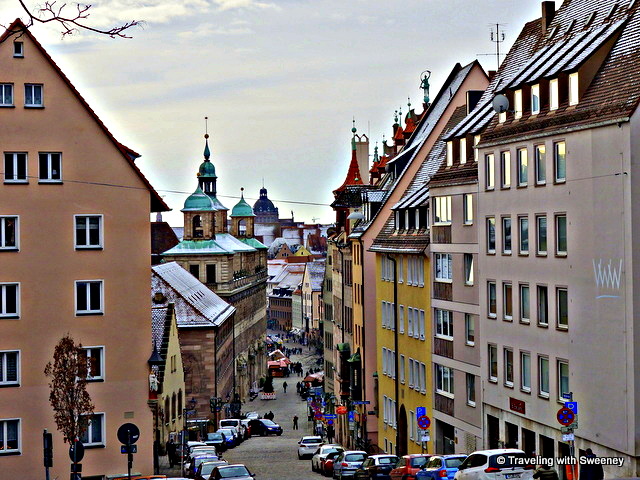 Street heading toward the main market square from the castle

As the buzz of crowds grew louder, we arrived at the Hauptmarkt, the main city square where Germany’s largest Christmas Market was in full swing (and where other key festivals plus a weekly market are held during the year). The Nuremberg Christmas Market, one of the most famous in Germany, is considered one of the best in Europe. Having been to many Christmas markets in Europe over the past several years, I agree. We were there at noon so saw the glockenspiel (just below the clock in the photo below) on the Church of Our Lady come to life. Along with the revelers at the market and other passersby, we stopped to watch the show of seven figurines circling Emperor Charles IV who sits on the throne. (Mr. TWS has a video that he’ll share later.) 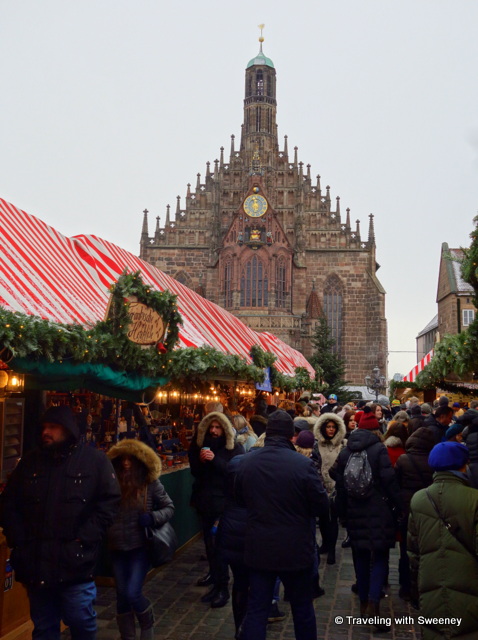 Nuremberg Christmas Market at Hauptmarkt with the Church of Our Lady

We were very impressed with the quality of crafts on display at the market and the stalls selling many varieties of lebkuchen, a type of gingerbread for which Nuremberg is known. First baked by monks in the 13th century, lebkuchen is spicy, nutty, and often decorated with icing to be eaten or hung as ornaments. I quickly devoured one with a touch of glühwein. Looking forward to what the Viking Gullveig chef was going to serve for a late on-board lunch, I resisted the local favorite, Nürnberger bratwurst, knowing I had a week of Christmas Market fare ahead of me. 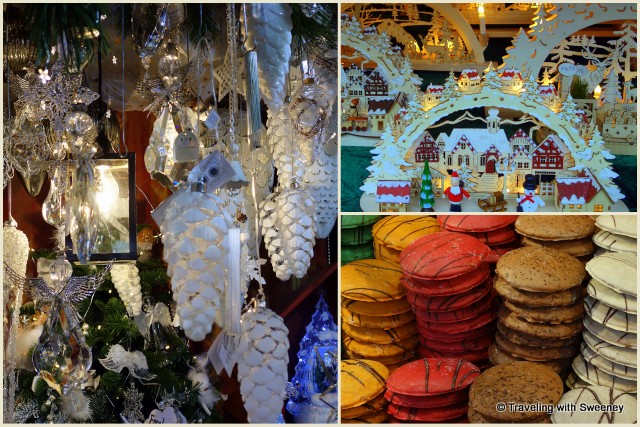 The Schöner Brunnen (Beautiful Fountain) in the Hauptmarkt was built in the 14th century with figures representing significant people and cultural aspects of the Holy Roman Empire. A very popular attraction of the fountain is a golden ring in the fence. Legend has it that it was the handiwork of a blacksmith’s assistant who, trying to impress the blacksmith’s daughter with his skills, installed the ring into the latticework without creating a visible seam. It is said that good luck comes from spinning the ring three full turns. I’m not sure if my rather awkward attempt has brought me luck, but I have to admit that I feel quite fortunate. 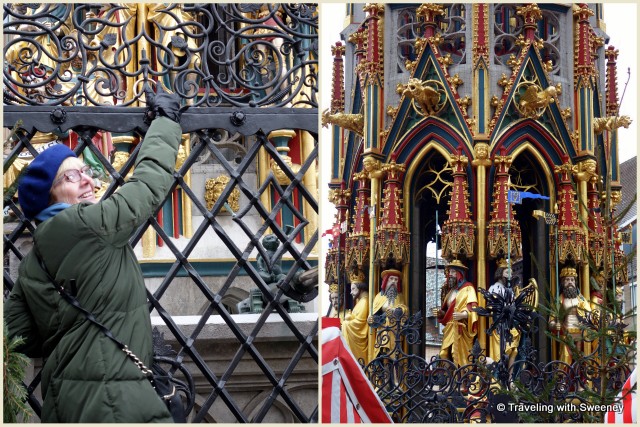 As we’ve seen in other German Christmas markets, the spirits were high as everyone was soaking up the holiday ambiance and imbibing in the local fare. We were delighted that it suddenly began to snow as we strolled around the market. It really added to the Christmas spirit and provided a good excuse to take an espresso break in one of the cozy cafes near the square. 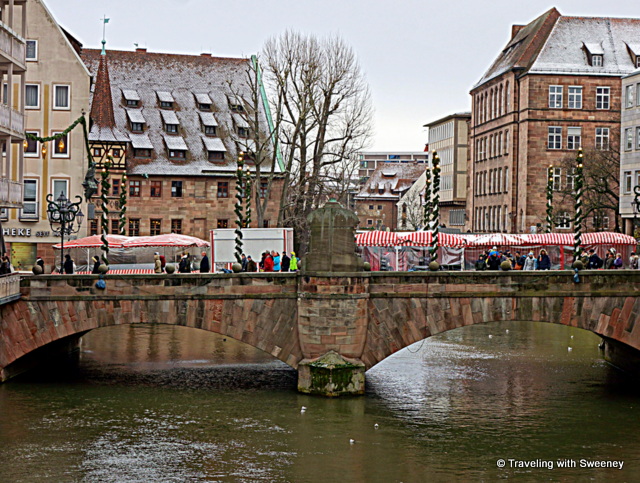 Bridge across the River Pegnitz

Now that we’ve had a great introduction to Nuremberg, we’ve got many reasons to put it on our list of places to return sometime.

An optional alternative tour to the included excursion is the “Nuremberg and World War II” tour which provides a more in-depth look at Nuremberg history with entry to the main World War II sites and the Palace of Justice (or the Memorium Nuremberg Trials exhibit if court is in session).

Thanks to Viking River for the wonderful cruise hospitality and hosting our Nuremberg visit.

13 thoughts on “History and Festivities in Nuremberg, Germany”