Music is an essential part of Mantua, Italy’s culture, and the Mantova Chamber Orchestra is an important part of Mantua’s music. For over 30 years, the orchestra has been spreading the enjoyment of a range of musical genres through their concerts and events and promoting music culture through innovative special programs. (Note: Mantova is the Italian name for the city of Mantua and is used in the official name of the orchestra, so you’ll see both forms used in this post.) 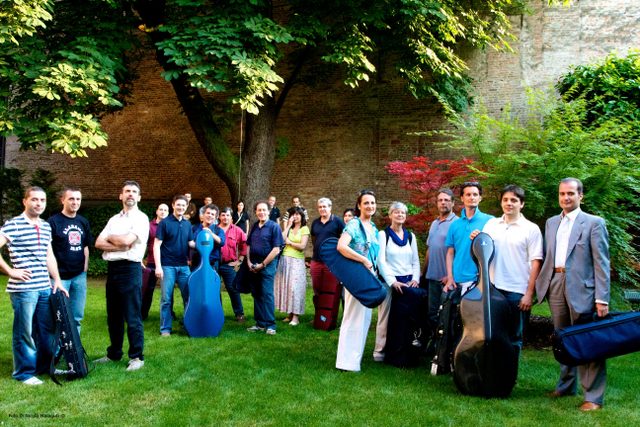 The Mantova Chamber Orchestra continues to be a force in Mantua actively reaching out to new audiences to develop their interest in learning about and enjoying music. For example, the orchestra provides special short concerts to young people to teach them about music and to give them an early appreciation for it. Hopefully, it will be an appreciation that lasts a lifetime.

In 2013, the Mantova Chamber Orchestra organized its first annual Mantova Chamber Music Festival. This year’s 4th annual festival ran from June 1 through June 5, and it was identified as one of the flagship events that have given Mantua the distinction of being the 2016 Italian Capital of Culture, the first city to receive this designation.

During the festival, 180 short concerts were performed by over 200 musicians from early morning until late night in Mantua’s most beautiful cultural and historical locations. Festival locations included Palazzo Ducale, Basilica di Santa Barbara, Rotonda di San Lorenzo, Teatro Bibiena, and Palazzo Castiglioni (the wonderful palace where Mr. TWS and I stayed in Mantua). Heading the list of many renowned international musical artists was maestro pianist Alfred Brendel, the festival’s guest of honor.

In a video promotional piece about the Mantova Chamber Music Festival, violinist Carolin Widmann raved about the city during festival time.

I go through the streets and I see musicians everywhere. I hear music everywhere and it embraces the city. And this is so beautiful. This is really what music is meant to be originally and what we have lost so often in the concert world out there. But here we come back to what the essence of music really is and that’s unbelievably beautiful and also because Mantova is a miracle of a city.”

Although we were not in Mantua for the Mantova Chamber Music Festival, I can imagine this city filled with music and we felt it would be great to be able to return during the event. 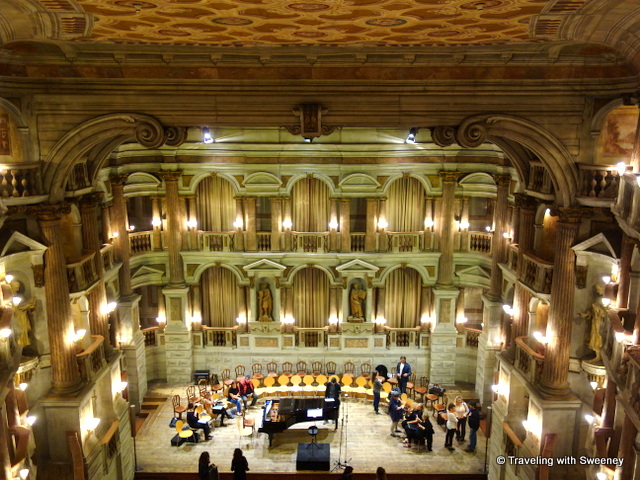 A choral group prepares for rehearsal at Teatro Bibiena

We really enjoyed our visit to Teatro Bibiena where we had a private tour of the theater and an opportunity to sit in on a rehearsal of a wonderful choral group. The singers voices were so clear and beautiful that I felt goosebumps as I listened. It was also a real treat to watch the creative process in action as they stopped at certain points to discuss and make adjustments. 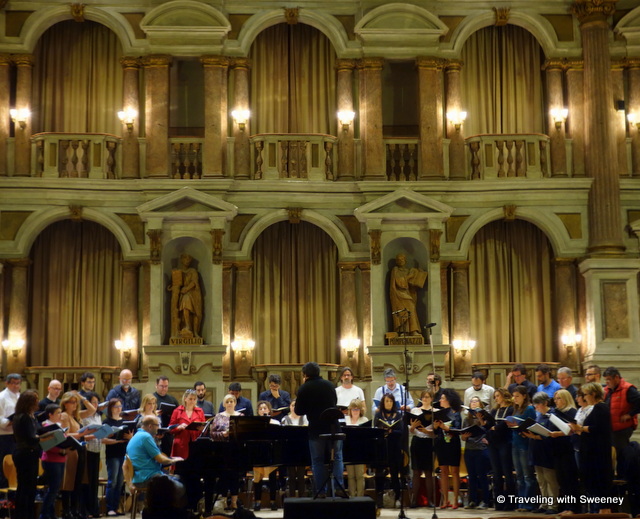 A rehearsal of a choral group at Teatro Bibiena

The beautiful Teatro Bibiena, built in 1769, is one of the main stages of the Mantova Chamber Orchestra Festival and is a premier venue for concerts, operas, and other performances throughout the year. Of great historical note, Mozart performed his first solo concert on stage here at age 13. About the theater, his father wrote that he had never seen anything more beautiful of its kind. I’m sure he was duly impressed by the theater’s fantastic acoustics, too. Almost two and a half centuries later and we were equally impressed with the theater’s beauty. 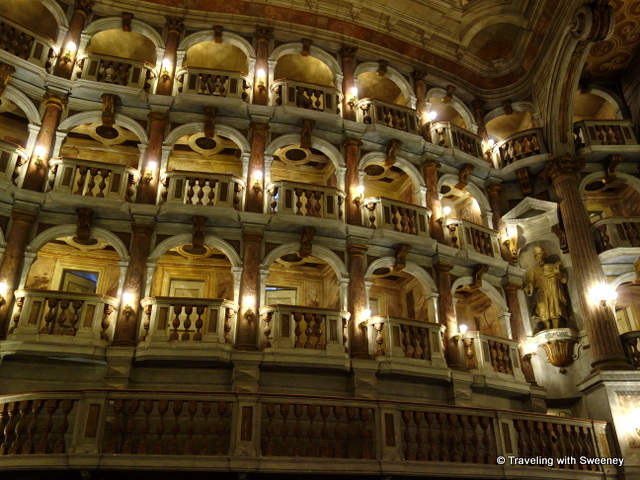 The elegant balconies surrounding the stage (even behind the stage) were not only designed to be excellent vantage points to see the performances, but more importantly for the members of the audience to “be seen”. 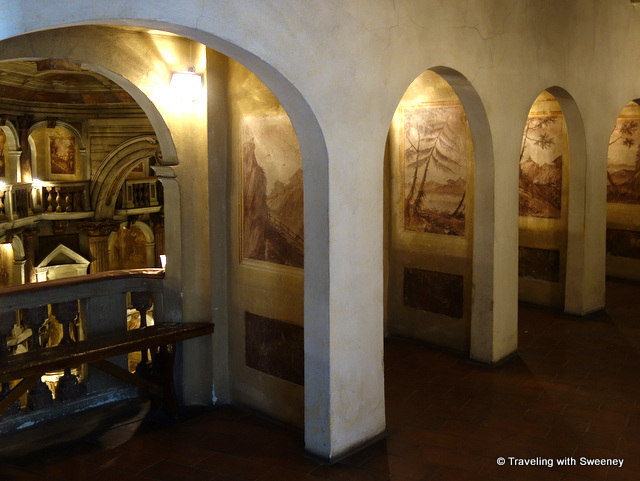 Entrances to private boxes on an upper level of the theater

Statues of Mantua’s notable people of the past, including Baldesar Castiglioni, (eminent ancestor of our hosts at Palazzo Castiglioni) adorn the theater. 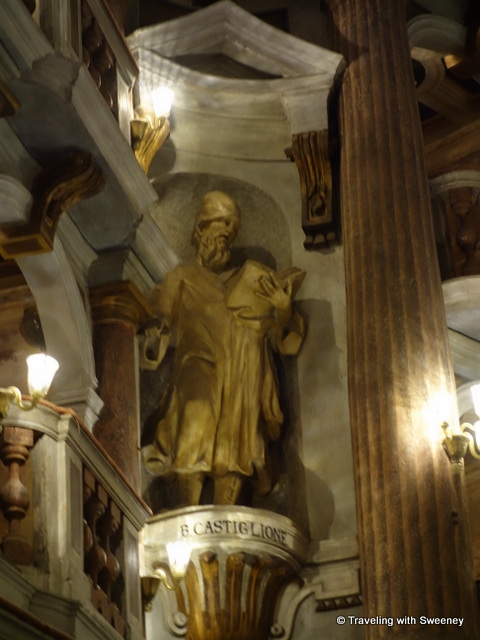 As we sat in the audience for the rehearsal, I thought about how lucky the people of Mantua are to have this venue and musical events available to them. I’ll always remember the exquisite sounds of music that I was fortunate to hear while in the Teatro Bibiena.

When you visit Mantua, Teatro Bibiena is a must-see, ideally for a performance, but at least stop by to take a look inside. The theater is open for visitors Tuesday through Sunday from 9:30 am to 12:30 pm and 3:00 pm to 6:00 pm.

One thought on “The Musical Essence of Mantua”