A walking tour of Montmartre

I love Paris and I love movies, so spending an afternoon on a walking tour of Montmartre with Paris Movie Walks author, Michael Schuermann and his wife, Marlys, was a highlight of my trip. Montmartre is rich in character, history, scenic views, artists and charm. It has also been the setting for many movies. 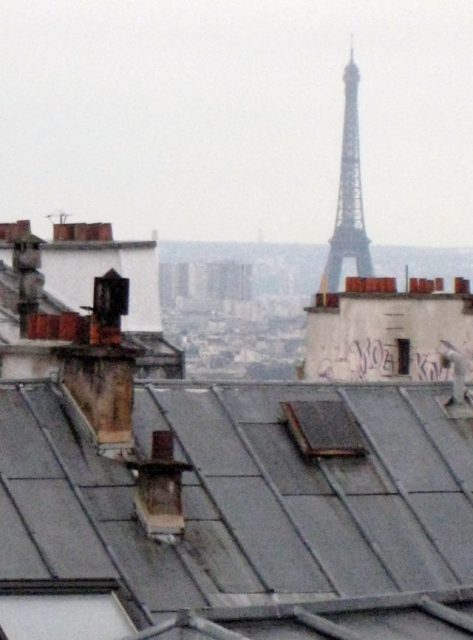 The Eiffel Tower seen over the rooftops of Montmartre

Montmartre in the movies

As we walked through Montmartre’s winding streets and climbed its staircases, Michael pointed out notable film locations, famous landmarks and lesser-known interesting sites. Just to give a few examples of Montmartre’s prominence in the movies, blockbusters like The Bourne Identity, the very popular Amélie, and La Vie en Rose which garnered an Academy Award for Marion Cotillard for her portrayal of Edith Piaf, have filmed in this picturesque area of Paris. One of the most famous classics set in Montmartre, (although not actually filmed in there) is An American in Paris. 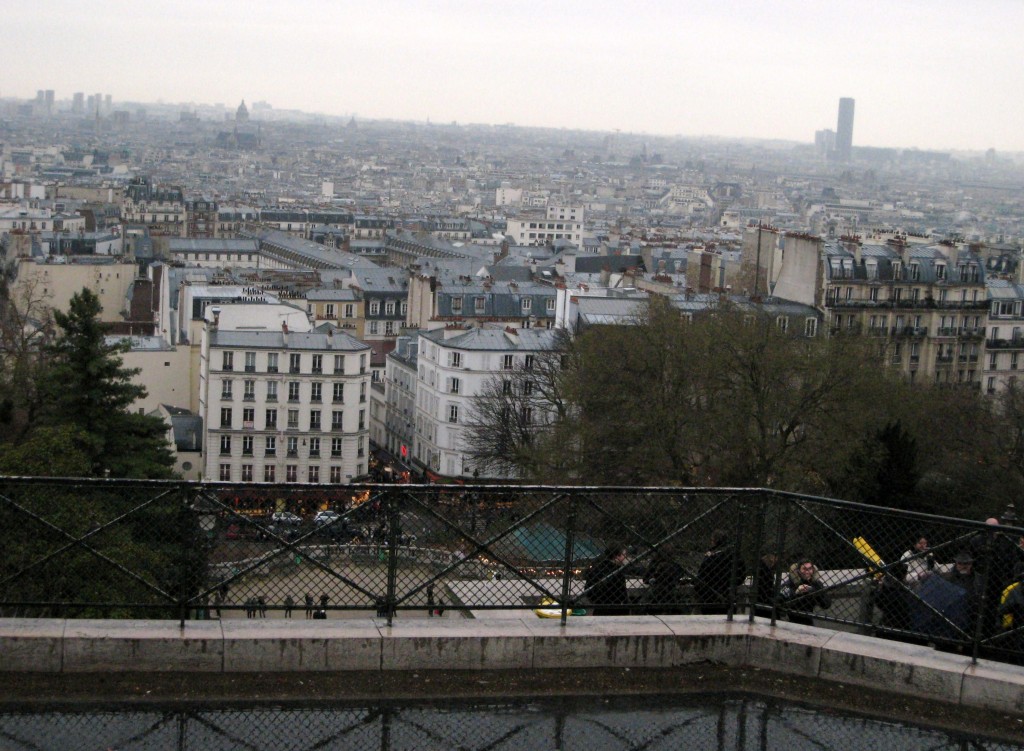 Our walk started up one of the often-filmed staircases of Montmartre toward Sacré-Coeur Basilica at the summit. Its distinctive Romano-Byzantine architecture has been captured in many films and the location provides stunning views. We looked over the rooftops of Montmartre viewing the Eiffel Tower in the distance, a familiar scene in movies such as The Bourne Identity. A short distance from there, we looked up Rue Paul-Albert where in French Kiss Meg Ryan is throwing away money given to her by Kevin Kline. This is a popular spot for film-loving tourists. 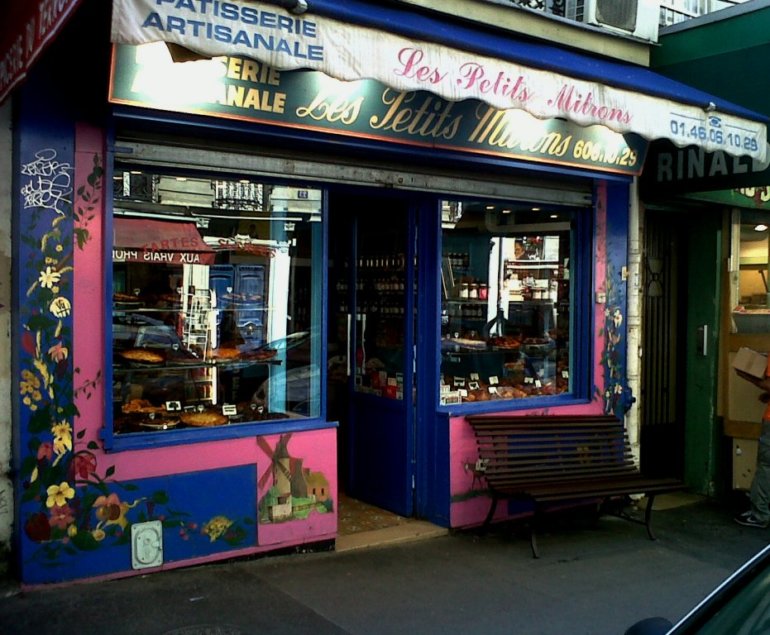 I’m a fan of French actress Audrey Tatou who captivated international audiences as the title character in Amélie. Much of the filming was done in Montmartre and I thought about how wonderful it would be to spend time at Café des Deux Moulins, the place where Amélie worked, and watch those characters interact. The scenes were filmed in the café, but the cigarette counter that was prominently displayed in the movie is no longer there. Nearby are other familiar places from the movie, such as the street market, Boucherie des Gourmets and Les Petits Mitrons. This was a real treat to see the location of one of my favorite French movies.

Our tour also took us to the front of a small cinema called Studio 28. In 1930, it was the scene of a scandal when Salvador Dali’s and Luis Bunuel’s L’age d’or was shown there, prompting protests that led to the banning of the film. Another theatre of note is Cine 13 which is run as a hobby by French filmmaker, Claude Lelouch, who still lives in the area. Montmartre also plays a prominent role in the Claude Lelouch film, A Man and a Woman, the movie that probably formed my earliest visions of a hot French romance. 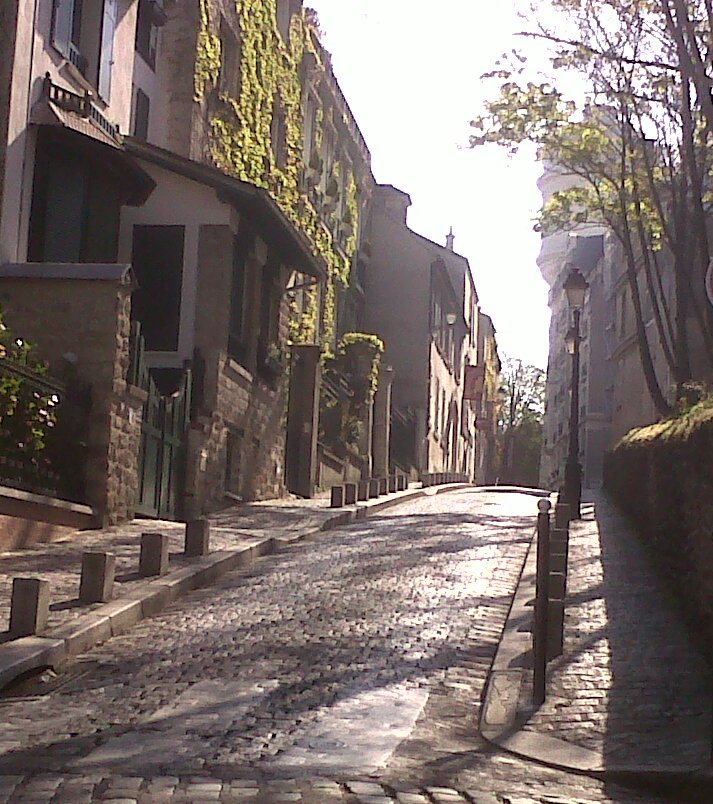 There are so many locations for movie buffs to identify and enjoy during a walk through Montmartre — Forget Paris, Sabrina, Everyone Says I Love You, Funny Face, Kiss of the Dragon, and more. But our walk also gave us a glimpse of other historic and interesting attractions of Montmartre.

Most people have heard of the famous cabaret, Moulin Rouge and its red windmill. But of the 13 once functional windmills (moulins) that were built during the 16th century for processing grapes and grain, only two remain. We viewed the Moulin de la Galette, where working-class Parisians gathered for entertainment in the 19th century and Moulin Radet, which is now a restaurant.

A haven for writers and artists

Of course, Montmartre is well-known as a haven for writers, poets and artists, such as Pierre-Auguste Renoir who lived and worked on Rue Cortot in what is now the Musée de Montmartre. Nearby on Rue des Saules is the famous old cabaret, the Lapin Agile, which has often been painted by artists, including Picasso and Utrillo.

A striking and amusing work of art we saw was the sculpture of Le Passe-Muraille depicting a man’s head, arms and one leg protruding from a stone wall. It is based on author Marcel Aymé’s story Le Passe-Muraille or “The Man Who Could Walk Through Walls.”

We stopped in front of the rebuilt Bateau-Lavoir, which provided lodging and studios for artists, such as Picasso and Modigliani, and enjoyed envisioning them living and working there.

In the Place du Tertre (Artists’ Square), surrounded by cafés, we saw artists painting portraits and landscapes. Although filled with tourists, the square still brings to mind a vision of the past when renowned French artists gathered there. 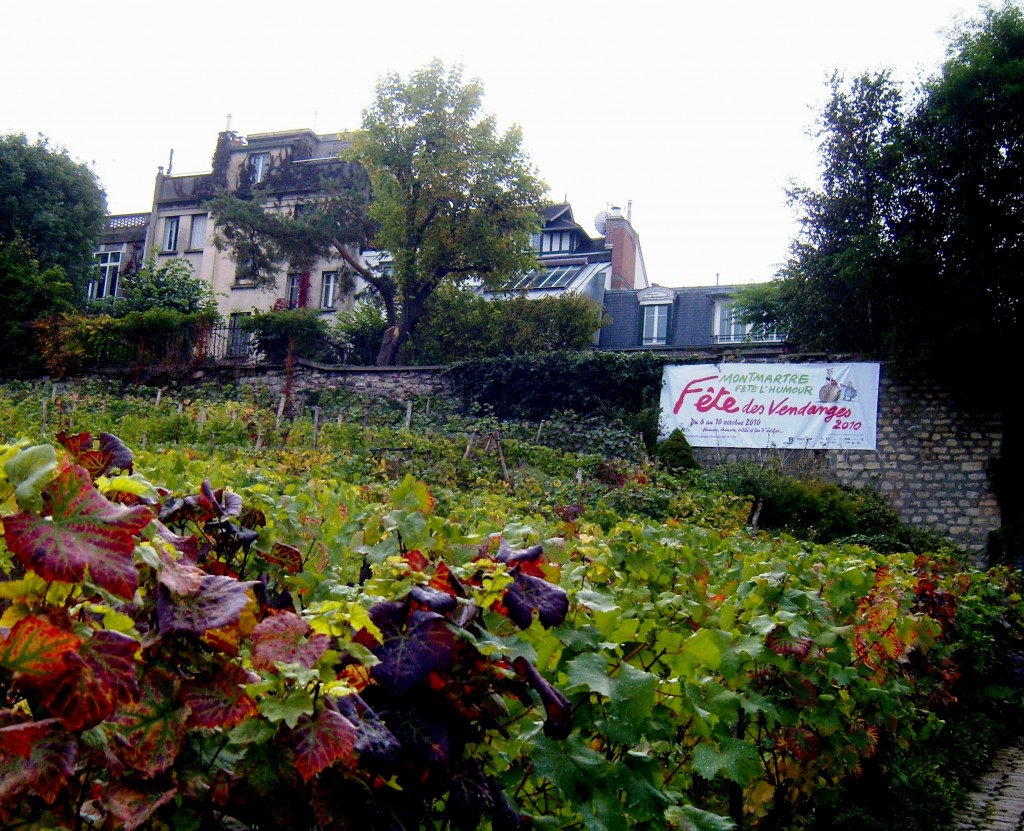 Vineyards were once plentiful in Montmartre, but now there is only one. Clos Montmartre is a lovely sight on the hillside on Rue Cortot. The grapes are auctioned off for charity during Fêtes des Vendanges, the annual harvest festival.

With still so much more to experience in Montmartre left for future visits, we said “au revoir” to our gracious hosts. We made our way to the Place des Abbesses, walking through its vibrant Christmas Market to the beautiful Abbesses Metro station, ending our lovely visit and walking tour of Montmartre.

With the Schuermann’s in Montmartre — Photo courtesy of M. Schuermann

42 thoughts on “On Location in Montmartre”