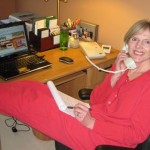 Did you know that there is a “National Wear Your Pajamas to Work Day”? Neither did I until Affinia Hotels sponsored a contest that was promoted on Twitter and Facebook in April. It was open to anyone who donned pajamas in their workplace on that day, even if it’s at home. So, as a home-based blogger, editor, and publisher I qualified. But I didn’t consider entering seriously until I mentioned it to my husband who went for the camera, urged me to put on pj’s and began directing poses. The prize was certainly attractive – one night’s stay at any Affinia hotel (New York, Washington DC or the Windy City, Chicago) to include logo monogrammed pj’s from Land’s End, Ben & Jerry’s ice cream, breakfast for two and late checkout.

We’ve stayed several times at Affinia hotels in New York and had very good experiences. So we began trial and error poses at my desk until we thought we had the right one – feet on the desk, telephone at my ear, notepad and pen in position and most importantly, my laptop placed prominently on the desk with the home page of one of my internet sites, First Dog Barking, in focus. The photo was submitted and within a few days I was surprised to find out that I was the winner. With all the photos I’m not sure if the one I’ve included here is the winning pose, but it’s close. 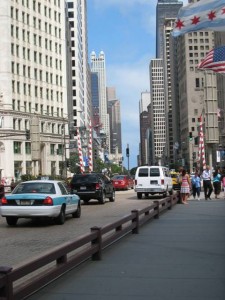 On Sunday night, August 22nd we redeemed the gift certificate in the Windy City at Affinia Chicago. The room was lovely; a nicely appointed junior suite on the 21st floor with a city view, comfortable king-size bed, separate living area and workspace. The service was very good, as well.

The nicest surprise about the Affinia Chicago was C-View, the rooftop bar. It was a gorgeous summer night, a balmy 75 degrees and the rooftop was a pleasant place to start the evening with a glass of 2007 BIN 36 Chardonnay and an artisanal cheese plate with dried fruit and walnut bread. It was the kind of place where you could spend a whole evening enjoying the food and atmosphere, but we wanted to get in a little more of the Windy City experience. I was born in Chicago, raised in the suburbs, lived and worked in the city as an adult, and visit quite often, but I never take my time there for granted. 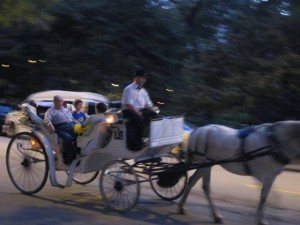 Only a block away from North Michigan Avenue, the hotel is very convenient for enjoying the Gold Coast shops, restaurants and historic sites like the Water Tower that survived the great fire of 1871. I’ve never taken a carriage ride in Chicago, but we saw several as we wandered side streets and Lake Shore Drive. The people riding in them were all smiling.

For dinner, we decided on the Rush Street area, long famous for nightclubs, bars and restaurants. Years ago, it was a popular area for “singles bars” and has recently also been dubbed “The Viagra Triangle”, a reference to the mostly-affluent older male clientele of the area and the triangle where State and Rush Streets meet. There are many restaurants with outdoor seating and that was a must for us on such a beautiful summer night. We found a table at the Tavern on Rush where the Tavern Chicken Caprese and Seared Sesame Hawaiian Tuna were good choices and very filling. Then it was time for a much-needed walk back to the hotel to indulge in our Ben & Jerry’s ice cream treat.

After a great night’s sleep and room service breakfast, I walked south on Michigan Avenue to Millennium Park where there is always something fun going on. Monday, August 23rd, was the first day of the Chicago Sister Cities International Festival in the park. Since it was early in the day, the crowd was small. Outside the pavilion, there were several demonstrators from Palestine Solidarity Group Chicago protesting the participation of Petach Tikva, Israel in the festival. Inside, there were vendors representing food, arts and crafts from the 28 sister cities’ countries such as Korea, Italy, Sweden, South Africa and India. I bought a beaded bracelet handmade by the Huichol people of Mexico. 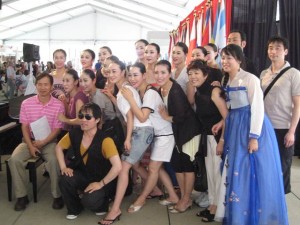 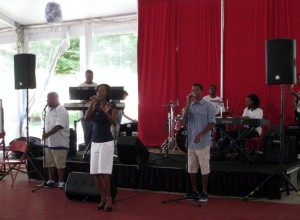 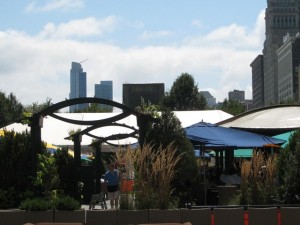 I didn’t have much time before I had to get back to the Affinia for checkout, but had lunch outside at the Park Grill. The beet salad was very refreshing. Afterwards, although I was running a bit late, I couldn’t help stopping at one more attraction in the park. It was a “Family Fun Festival” tent. Normally, that wouldn’t hold much interest for me, but I could hear a live band inside performing R & B — they sounded terrific. I only stayed for a few minutes to watch this group of young, local musicians, but it was a great bonus for the day.

As with most of my visits to Chicago, it was too short. But I enjoy whatever city sights, sounds and activities I can manage to fit in and look forward to the next time I can visit the Windy City!