It was just by chance that I became aware of Fly4MS through my social media network of travel bloggers via Maria Pulice (@MariaPulice), a photographer involved in the project. Fly4MS is an endeavor to promote global awareness of Multiple Sclerosis (MS) with a bold and creative 29,000m trans-Atlantic/trans-European trip that began on August 31st. Visit their blog to follow the Fly4MS team on their journey.

The sad coincidence is that my niece, Veronica, who had lived so graciously and cheerfully with MS for over 20 years was being transferred to Joliet Area Community Hospice in Illinois on August 31st. She passed away on September 3rd.

As I write about my travels and travel dreams, I’ve been thinking about how Roni who, despite her vivacious spirit and vibrant energy, had severely limited mobility for several years and was homebound for the last five. 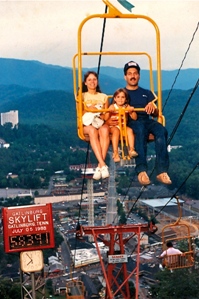 I think about how much she loved traveling to Tennessee over the years with her husband, Frank and daughter, Heather to visit family and spend time in Gatlinburg. At her memorial service, there were posters and a DVD with photos of her throughout her life. One of them showed her, Frank and Heather on the Skylift chair ride in Gatlinburg. She has such a look of contentment on her face. I also think about trips she took out west to see family in Arizona and California.

On a visit here to California that she made in the late 1990’s we did some sightseeing in San Francisco and took a few scenic routes in the area. It was fun to show her around because she enjoyed the time so much. She always had a smile on her face and never complained even though the disease was present and she was taking daily treatments. In fact, as we were on a particularly winding road through the mountains, we didn’t realize that she was feeling a bit nauseous – she didn’t want to say anything. When we said that we would cut the tour short, she insisted with a smile and laugh that she was OK and we should keep going – she didn’t want the trip to end. 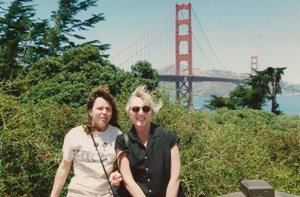 Throughout her life, Roni liked to be on-the-go and she brought a lot of happiness to not only her friends and family, but people she met along the way.

Whenever I come across a cause for MS and learn of people who are trying to raise awareness or support efforts to find advanced treatments and a cure, I’ll always think of Roni and in her memory, say “thanks” to those who care. Thanks, Fly4MS!

7 thoughts on “Thinking about Veronica and a Good Cause”