The Pacific Coast Highway, Highway 1, along the California Central Coast through the famous Big Sur area is thought by many to be one of the most beautiful drives in the world. Our wedding anniversary gave us a good reason to head down the coast about 200 miles from the San Francisco Bay Area for a weekend getaway. Twisting roads, quite narrow at times, climb high up the cliffs above the ocean much of the route offering scenic vistas on this rocky coastline. 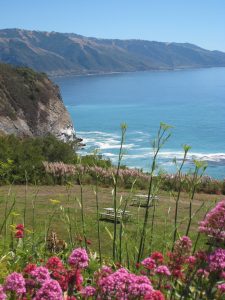 After about a four-hour drive, including several stops for views, we had lunch at Sebastian General Store in old San Simeon, where we sat on the deck and watched the ocean through an archway. The sandwiches were delicious, but enormous. Hearst Ranch Winery’s tasting room is also located in the store, so we each enjoyed a glass of wine, Chardonnay for me and Merlot for my husband. 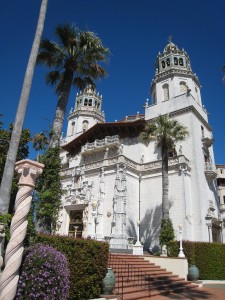 Our only planned stop for the day was Hearst Castle, William Randolph Hearst’s historic estate which is across Highway 1 from the store. After taking a short bus ride from the visitor’s center to the castle at the top of the hill, you get a panorama of the Santa Lucia Mountains and Pacific Ocean. The architecture of the main house and the surrounding bungalows is unique and interesting. Each building is decorated with a large collection of European art and ancient artifacts, which were among Hearst’s passions. He also loved to swim, and there is a spectacular Greco-Roman style outdoor pool (which was rebuilt twice until the third met with his approval) and a Roman-style indoor pool decorated with floor to ceiling mosaic tiles. Out of 4 different tours available, we took Tour One, which is recommended for first time visitors and is about one hour and 15 minutes. The ticket also includes a 45-minute movie at the visitor’s center that gives a lot of background on W.R. Hearst’s turning a dream into reality in building the castle with the aid of architect Julia Morgan and shows several of his notable guests. 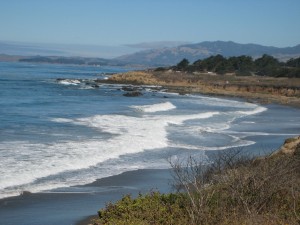 Our hotel, Moonstone Landing, was just a few miles south of Heart Castle in Cambria along Moonstone Beach. We had a nice, large room on the side with a partial view of the ocean. There are front units that have full ocean views and balconies, but those were already taken. The inn was very comfortable and convenient, just across the street from the beach and boardwalk. 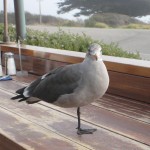 We strolled down the boardwalk a short way to Moonstone Beach Bar & Grill for appetizers and wine on the outdoor patio facing the ocean. This is where we met Freddie, a one-legged seagull that is considered the restaurant’s unofficial mascot. Nearby, a particularly sly gull had an impressive technique. Two women were enjoying their entrées while keeping an eye on the gull hovering on a ledge. When they finished eating the bird finally made his move, distracting the women by snatching a cloth napkin and dropping it into the bushes. Quickly, while they were still distracted, he picked up a leftover bread roll and flew away with his prize.

We enjoyed walking along the boardwalk, watching surfers in wetsuits wait for the right waves, enjoying the fresh ocean breeze and catching a bit of sunset through the fog as it rolled in. Later that evening, we had sea bass and Alaskan halibut at the excellent Sea Chest Oyster Bar and Restaurant, next door to our hotel.

The next afternoon we retraced our steps north on Highway 1. However, because the view is so completely different in the opposite direction, we felt as though we were continuing the journey rather than going home. A real treat was to stop for lunch at Lucia Lodge and Restaurant in Big Sur and sit outside enjoy the stunning coastal vista.

Highway 1 offers beautiful scenery and attractions anywhere along the California coast, and this central coast portion has some of the best. Just allow plenty of time to really enjoy the ride and stop to savor the experience on your weekend getaway.