What a day in Emilia-Romagna! We started out from our temporary home in Verucchio for a tour of San Leo (more to come about that and Sweeney’s travel blogging iPhone incident) and then unforgettable culinary experiences in Santarcangelo. Where do I start?

Pasta making is not easy

I love pasta in many different varieties, but indulge rather infrequently because of the carbs. So pasta was one of the things I was really looking forward to as we anticipated our trip to Emilia-Romagna. I developed a craving but also some trepidation that I might return home resembling Jabba the Hutt.

Although we had no doubt that there is much skill and artistry involved in making pasta, we got to learn firsthand the work that goes into the process. One of the great parts of our trip was the immersion into the culture and everyday life. On our very first day in Emilia-Romagna, we stopped for lunch at a pasta shop/restaurant in Modigliana where I was invited into the kitchen to observe fresh pasta being made. It was pretty amazing to see a small ball of dough converted to a very thin 1 meter in diameter disc and then quickly folded and cut into pasta “noodles”.

Taking our immersion even deeper, on a warm afternoon several days later, we met Pasta Fresca Laura owners Laura di Maioli and her husband Michele at their shop in Santarcangelo for Sweeney to have a hands-on pasta making experience in their kitchen. 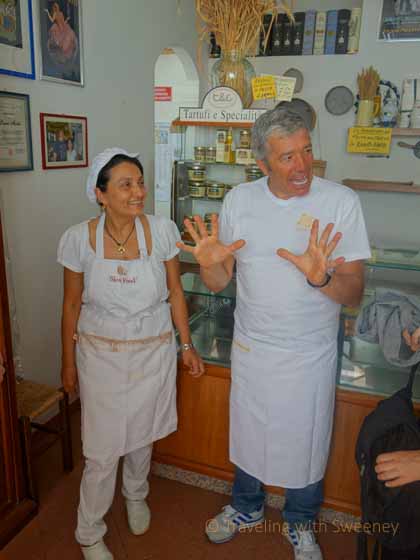 They were very welcoming and enthusiastic as Michele animatedly introduced us to what we were about to undertake. We all proceeded to the kitchen. It was rather narrow and long, designed for the efficient work of several skilled pasta professionals. Adding five additional people made tight quarters. It was also very warm and humid, a result of the weather that day, but more we were told for the need to have the best climate to facilitate the pasta making. Sweeney donned an apron that Laura provided and with a big smile, got ready to make pasta. She immediately approached one of the long tables and after some brief instruction, dove in. 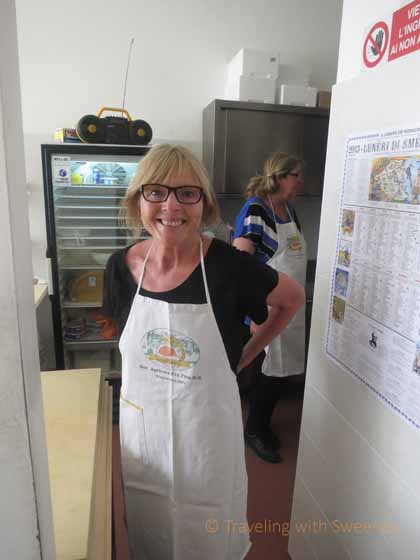 Sweeney quickly formed a flat volcano of flour, poured some water in and began mixing the dough by hand. Several times Michele, observing from behind so as not to intimidate, stepped forward with some brief instruction — one to make the hand mixing more efficient, the second reaching in and grabbing Sweeney’s wrists to demonstrate the proper action, and finally instructing her on how to remove the dough from her hands during the process (all pictured below). 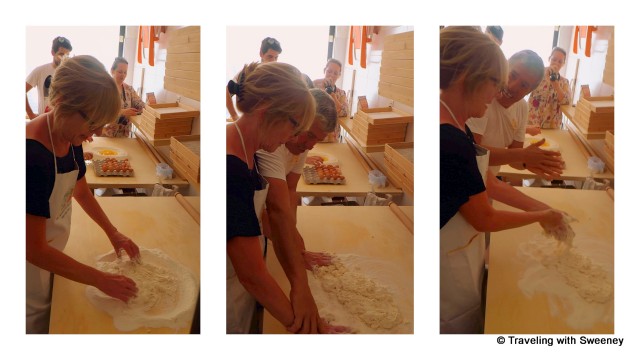 Getting hands on instructions from Michele

In the picture below in the background you can see another flour volcano which contained eggs instead of water for a different type of pasta. (I think Sweeney had the better of it here, unless you’re into sploshing). The egg dough is just eggs and flour, while Sweeney’s was just water and flour. We had been instructed by Michele that the special flour used enabled such a simple recipe. It was hard-grained, almost like white beach sand, in contrast to the quite different flour consistency I have used all my life. I believe that the egg pasta is especially used in Emilia-Romagna compared to other areas in Italy. 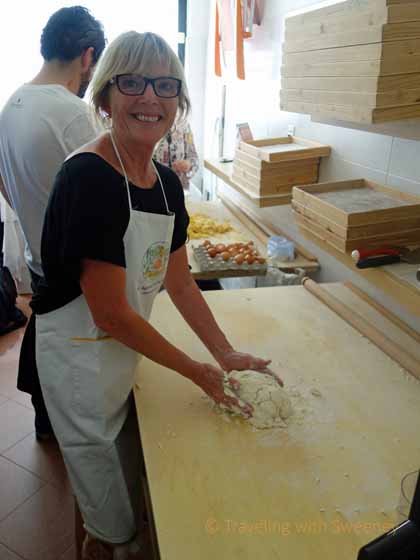 Forming the ball of dough

Sweeney finally formed the mixture into a nice large ball of dough. Then Michele gave quick instructions on how to knead the dough. Basically Sweeney took the dough ball and placed it on the edge of the table nearest her; she pushed downward with her weight and at the same time rolled the ball forward to the opposite side of the table, quickly forming it into a torpedo shape. Then she grabbed it, returned it to its starting position, pushed in both ends to make a near short barrel shape and repeated the process until Michele said it was done.

The final result was formed into a ball and then placed in a plastic bag to be refrigerated. After ten minutes, Michele took the chilled loaf and formed it into a boxy cylinder with a rounded top. Then he instructed Sweeney to cross her hands and push down in the center, spin the result 90 degrees and repeat several times.

Next Michele produced a long thin roller (3 cm or so thick by over 1 meter long) and showed Sweeney how to roll it. Basically, she was to set the roller in the middle of the dough patty and roll directly away from herself. Then she centered the dough on the table, rotated it 90 degrees and repeated again and again. 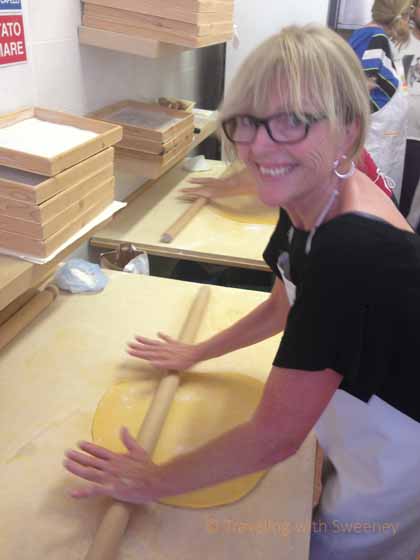 Rolling out the dough

Although I originally had my doubts, Sweeney seemed a natural as she quickly took the long thin roller to the dough and exuberantly began to create an almost identical shape to the one I’d seen in the other shop on our first day. Then Michele instructed Sweeney on folding the dough, cutting it; then grabbing the folded cuttings between her fingers and raising them to let them unfold revealing “noodles”, the tagliatelle. The results were not that dissimilar from what I had seen the first day and I felt a surge of pride for Sweeney. Please see her delight at her accomplishment in the short video below.

Sweeney continued helping with the three other types of pasta that were created. I believe one involved the water dough and similar techniques to produce the same thin disc Sweeney had created for the tagliatelle. Then Michele took a long knife and expertly cut the dough (freehand) into almost precisely uniform squares of about 8 cm. (3 inches) — really impressive! Laura had prepared the fillings for the cappelletti (hat-shaped pasta), one pork and one vegetarian. Small amounts were piled on each square and then the pasta was folded and sealed around it as shown below. 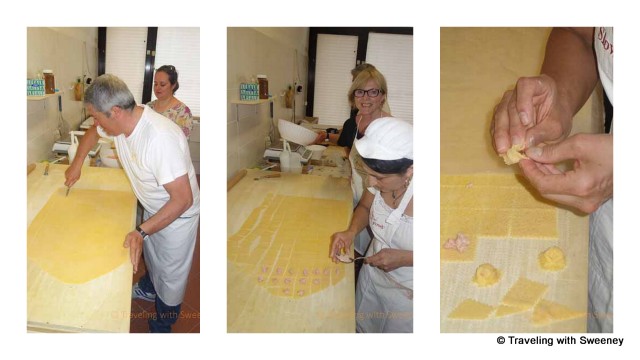 Sweeney demonstrates below her version of the perfect cappelletti.

There was another type of pasta created with the water dough that Sweeney made. She took a ball of dough (mixed and kneaded) and created a brick shape. Then with the instructions of Michele, she cut them into long, thin rolled up strands. The video below shows Sweeney starting slow, finishing fast and basking in the praise.

These strands were then rolled between her palms to create very thin (1 cm) and long (about 10 cm.) pasta tapered at both ends. I really enjoyed watching Michele do this. He was very fast and ejected each completed with a quick toss and the pasta landing on the table. Sweeney caught on fast and was almost as efficient as Michele.

All in all, it was a frenzy of activity with 3 to 4 people working on the four different kinds of pasta. There was Sweeney’s first, the noodles (tagliatelle, very fettucine-like) similar to what I had seen made the first day; there was the ravioli-like tortelli, there were the long thin tapered at both ends, and finally there was the cappelletti. 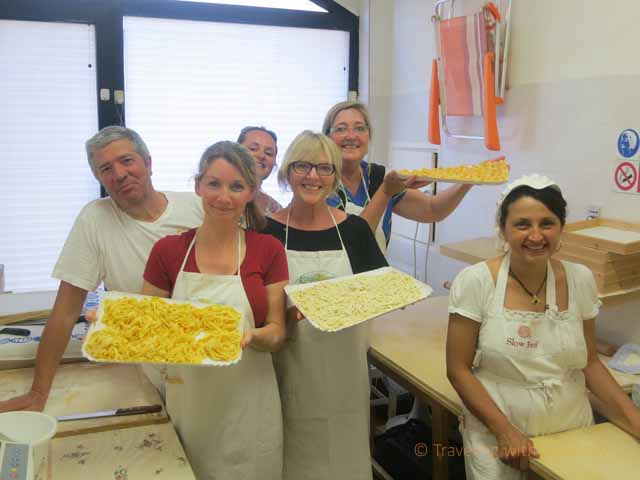 Michele and Laura were efficient and patient instructors. They gave excellent direction and provided slight suggestions to quickly improve the skills of the students. Above all, they were enthusiastic, friendly and humorous in the attention they gave Sweeney and the others. 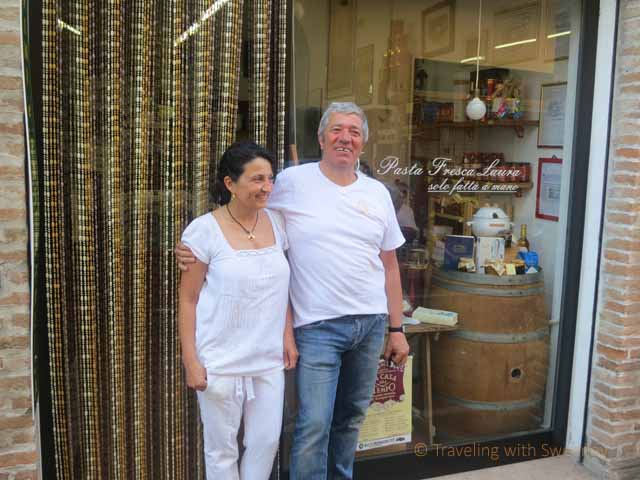 Laura and Michele outside of Pasta Fresca Laura

I have to say that I was quite impressed. I never expected such achievement in such a short time. The four different pastas were packaged in the same containers in which customers would carry their purchases. The containers were placed in a plastic bag which we kept refrigerated at the tourist office while we enjoyed aperitivos at a café before heading to a nearby winery, Collina dei Poeti. At the winery, we would help prepare the pasta and then enjoy a late evening meal of our handiwork accompanied by wonderful wines. As with pudding, the proof is in the eating. But that is the subject of an upcoming post — stay tuned.

Disclosure: Thanks to Le Case Antiche for providing our accommodations in Verucchio. Thanks also to Alessandra of 21Grammy and Associazione Internazionale Alberghi Diffusi for making this project possible.