Editor’s Note: Some posts on this site contain affiliate links, meaning if you book or buy something through one of these links, I may earn a small commission (at no extra cost to you!).

With flower boxes full of geraniums and bougainvillea colorfully contrasting the white buildings throughout its historic center, the subtle beauty of Cisternino made a lasting impression on me. A town with a population of under 12,000 residents, it is one of the distinctively lovely hilltop villages of the Valle d’Itria in Italy’s Puglia region. 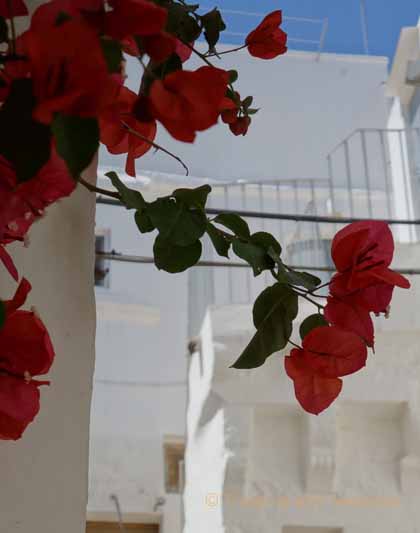 Red bougainvillea against the whitewashed buildings in Cisternino

After a walk around Locorotondo earlier in the morning, we drove six miles to Cisternino, passing fields, olive groves and clusters of “trulli” (the cone-shaped structures unique to this area of Puglia). Past the more modern developments in the outskirts of the town, we wound our way up the hill toward the Centro Storico (historic center), ready to explore Cisternino on foot. 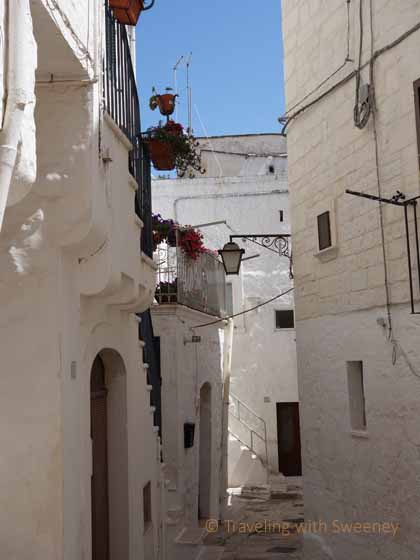 At first, the old town appeared to be much like Locorontodo, with whitewashed buildings, narrow streets and the top of a church belltower visible from the entrance. But although similar to the typical architecture of the region, Cisternino has its own character with a more rustic, lived-in and slow-paced ambiance.

Although we were looking for the local tourist office, we never actually found it. That was fine with me since a town like this is perfect for meandering. Now I ask you to follow me as we wander through the canyons of close buildings in a shaded maze of stone lanes. 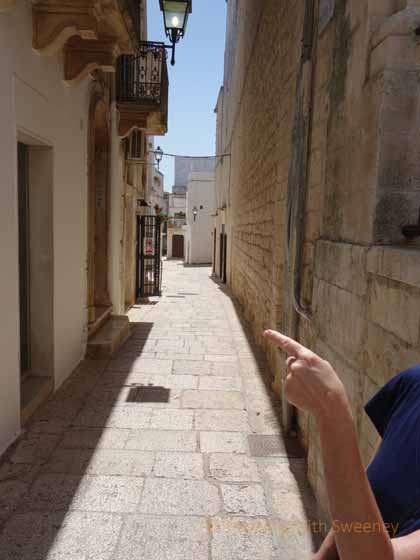 On this warm, sunny day just before noon, it was quiet at the entrance to Centro Storico as a few residents sat on benches or talked with neighbors in the piazza. The arched gateway on the left in the photo below is the Piazza Piccola (or Porta Piccenne), one of the entrances to old Cisternino. 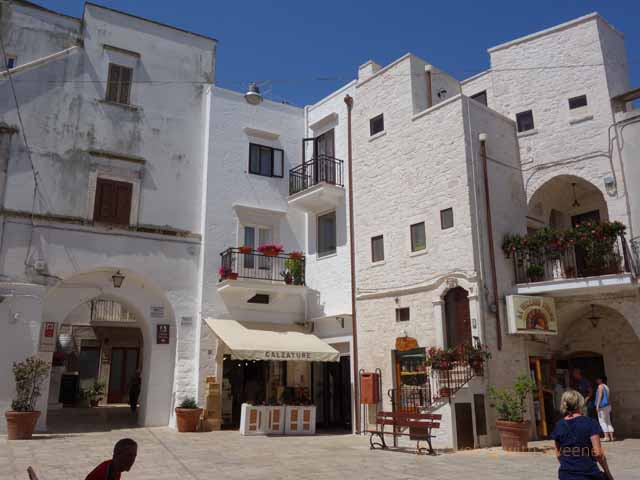 The historic center has five districts (rioni) identified by plaques painted on the street walls — l’isule (isolated from streets around it), le scheledde (curbs that were used to measure the pace of wagons), u pantano (swamp), u borgo (neighborhood) and borgo vecchio (oldest district). 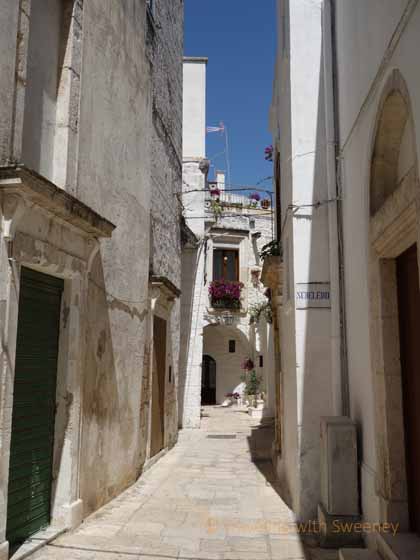 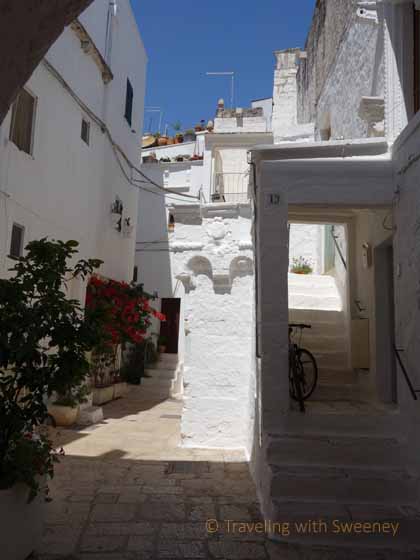 The u Pandene area in the southeast corner of the old town is a maze of hidden alleys and passageways with three palaces, the Palazzo Carrieri, the Palazzo Pozio and the Palazzo de Amico. 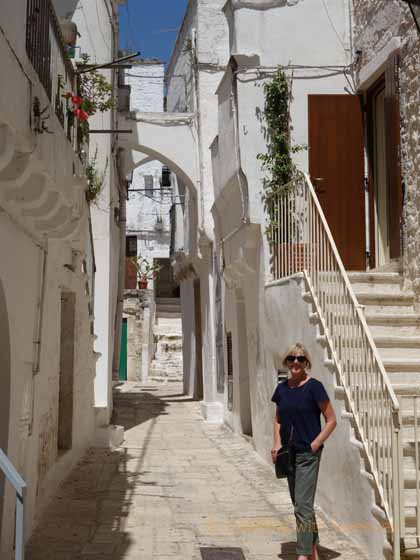 Arch over a lane in U Pandene section of Cisternino 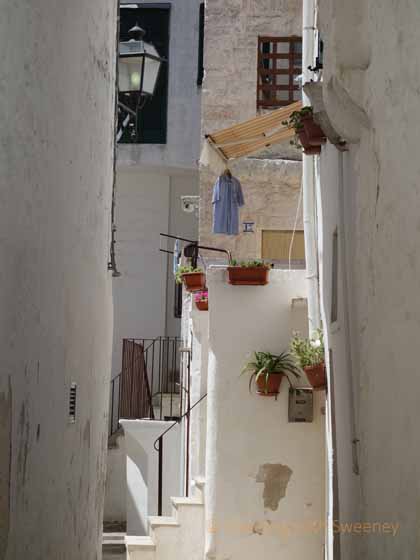 Japanese architect Hidenobu Jinnai is quoted as saying that Cisternino is “a great masterpiece of architecture without architects”, referencing the various types of architecture that, although diverse, work well together. 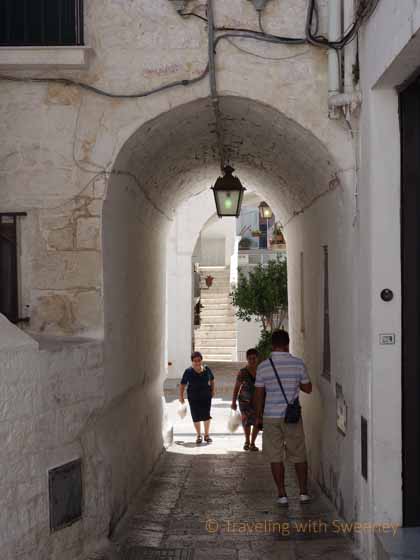 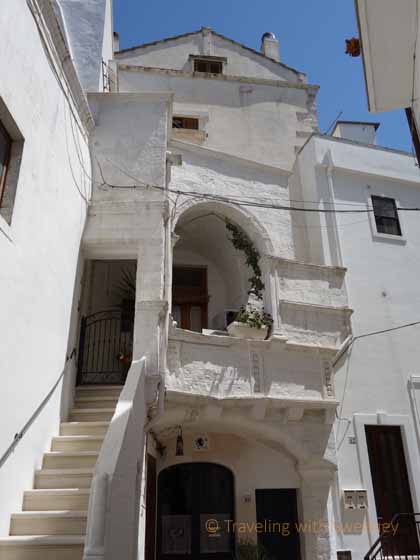 Steep steps and unique architecture of a Cisternino home

The steep steps and facade of this Centro Storico home exemplify the unique architecture of Cisternino. 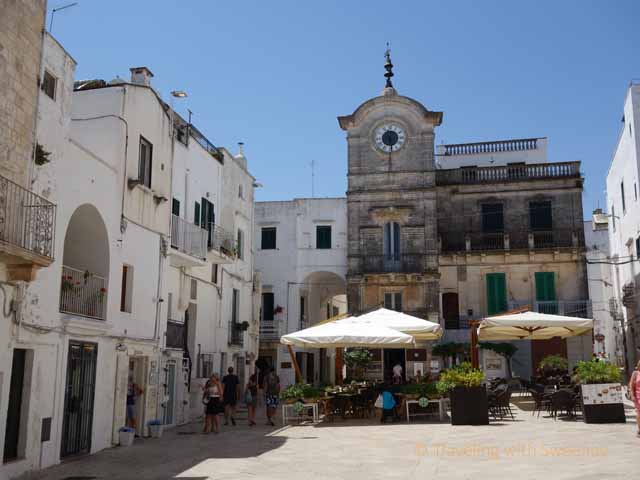 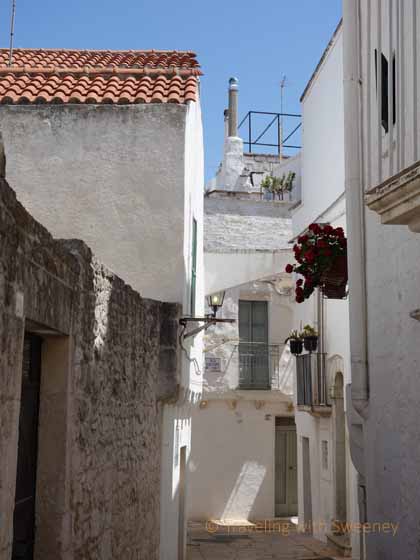 This tile roof and stone building are further examples of varied architecture of Cisternino. The squared-off tops to the low buildings as seen below were in contrast to the pervasive peaked roofs of Locorotondo. 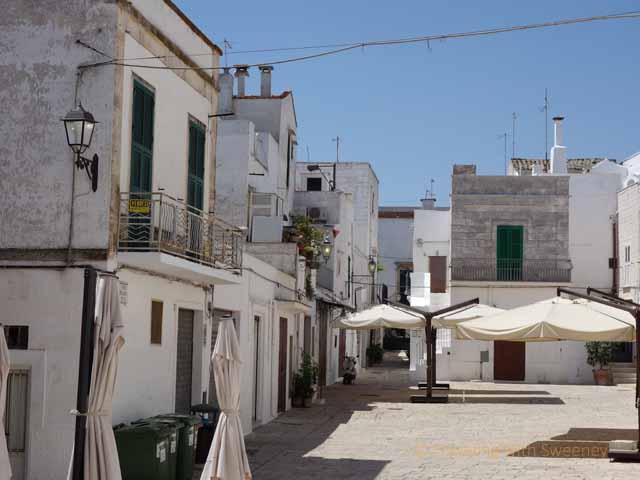 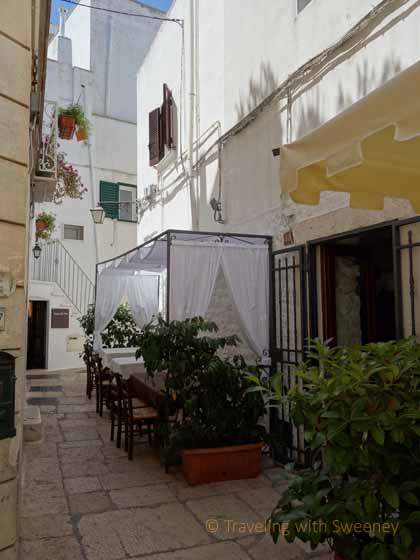 Restaurants and shops along Via Duca d’Aosta 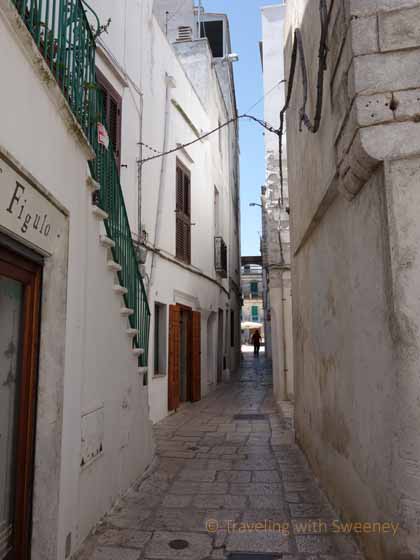 Of course, the churches

As in many of the towns and cities we visited in Italy, Cisternino has several beautiful churches, of which we saw two. 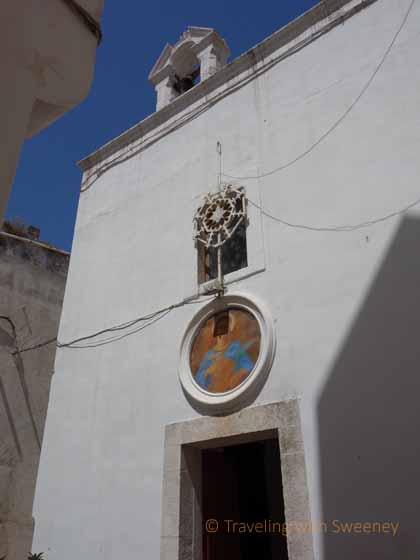 Just beyond the Porta Piccola (“small door”, Porta Piccènne in dialect), the ancient entrance to the old town of Cisternino, is the Church of Santa Lucia. The small church with a single room and bell tower was built in the 17th century. The round painting above the door depicts Santa Lucia. However, in the bright sun, we didn’t notice at the time that there was a shadow directly on her face. 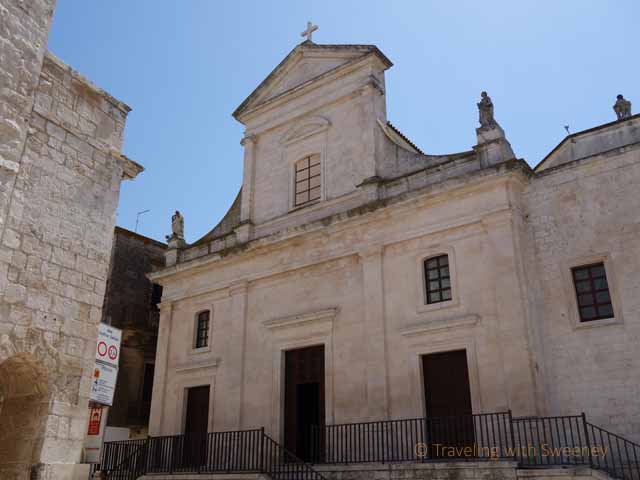 Cisternino’s first church, built in 1000 AD has been replaced with the 13th century Mother Church, St. Nicholas of Patara.

Across from the cathedral is another of the town’s attractions, the Torre Grande (only a partial section is shown in the photo above), a Norman tower which stood as a symbol of power topped with a statue of the patron saint, Nicholas. 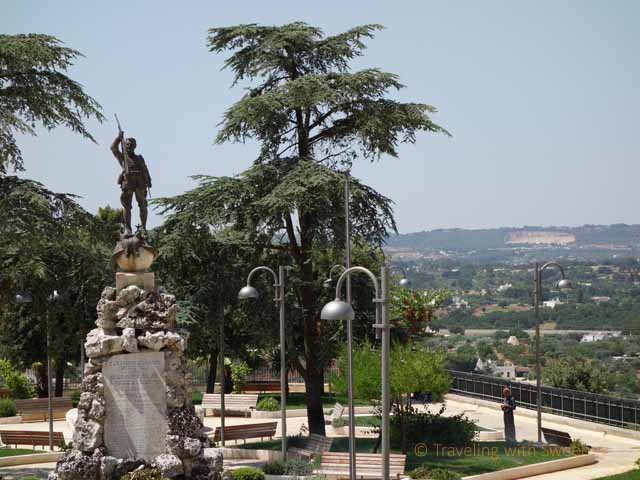 Near the church is a community square with a view of lovely landscapes of the valley below with scattered clusters of trulli, fields and olive groves.

Cisternino is known for its tradition of “fornello pronto” where you can choose your meat or local specialty such as bombette (mince, ham and cheese) directly at the butcher shop’s hot stove where it is cooked to order and then served to you at a cafe table.

Cisternino also celebrates many festivals and feast days especially in the summer. In July, there is the Contrada Sisto, a meatball and roulade festival. In August, there is a procession honoring one of the town’s patron saints at Festa di San Quirico. Contrada Caranna, a food festival featuring Puglia’s famous ear-shaped pasta, orecchiette, is also in August. Then in September, the grape harvest festival takes places after harvest before the pressing begins.

The nearest airports are in the cities of Bari and Brindisi which are about a one hour’s drive from Cisternino.

63 thoughts on “The Subtle Beauty of Cisternino”