Puglia, I love you!

Expertly escorted by our driver/guide Carlo Romano following an itinerary planned by Promozione Puglia, we made our way around Puglia, the heel of Italy’s boot, during our seven day visit in June. We visited many attractions, large and small, indulged in bountiful traditional foods, met memorable people, and more. Seven days isn’t long enough to see and do everything in the Puglia region of Italy, but it was plenty long enough for us to become smitten.

Puglia is somewhat undiscovered compared to more frequently visited areas of Italy. So part of me would like to keep it a secret. However, I think the word is already getting out about this beautiful and interesting place and a larger part of me wants to tell about how great it is. Our trip was so full of activities and sites, it is certainly more than I can cover in one blog post. We’ve touched on a few highlights of our Puglia road trip already with walks around Locorotondo and Cisternino, scrumptious meals in Ostuni and at Balnearea Beach, and the fresh seafood of Bari among other topics. In this post, I wanted to provide a sampling of what made me fall in love with Puglia, but there will be more to come about each. 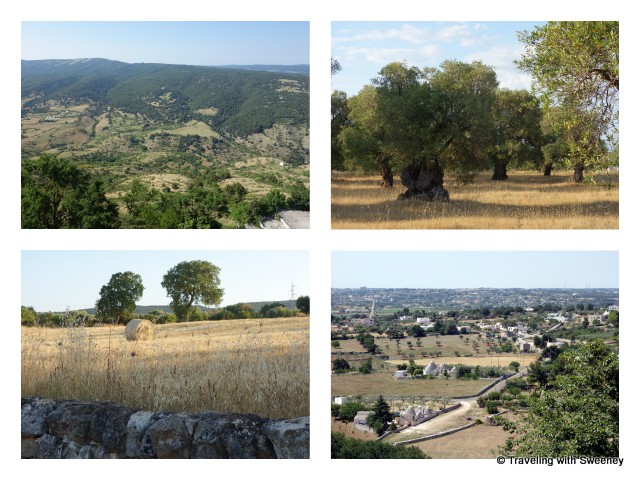 There’s a distinctive feeling to Puglia that you notice as soon as you arrive, partly due to the scenic landscapes and Mediterranean climate.  I loved our drives through the hills and valleys dotted with olive groves, vineyards and small communities. The heat of the sun during the day and the balmy evening breezes were seductive. No wonder I fell in love.

Another aspect of the allure is the deep blue sea with waters of the Adriatic and Ionian Seas on either coast. Our first night in Puglia was spent in Vieste, a resort town that is a popular spot for European tourists. We had a lovely view of the Adriatic over the rooftops of the city. Then on our way out of town, we stopped at a scenic spot with a view of the sea, boats, and a natural stone arch (top right photo below).

We also enjoyed the Adriatic while relaxing and swimming at two beaches on Puglia’s east coast. Mr. TWS has a special fondness for beaches, and he couldn’t wait to get in the water when we visited Guna Beach and Balnearea Beach. My favorite activity was looking out to sea from a lounge chair while sipping on a spritz.

In Gallipoli on the west coast of Puglia we enjoyed views of the Ionian Sea as we had lunch at La Giudecca and as we walked around the city.

The hilltop towns of the Valle d’Itria are stunning with their whitewashed buildings, stone pathways, majestic cathedrals and buildings adorned with colorful flowers and trim. We visited several of them, large and small and each had character and beauty of their own — Alberobello with its round structures with cone-shaped roofs, “The White City” of Ostuni, Locorotondo with its distinctive peaked roofs, and others that we’ll be covering individually in more detail in future posts. 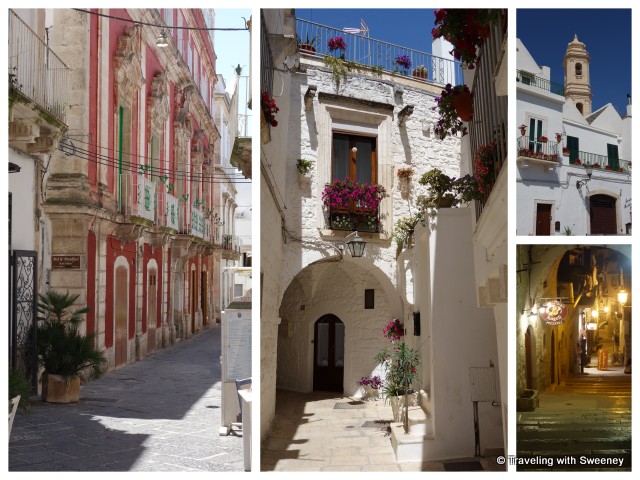 Scenes of Martina Franca, Cisternino, Locorotondo and Vieste at night

In every small town and city, there are stunning churches and cathedrals, most very simple structures on the outside, ornate and majestic on the inside. I was particularly fascinated with the ceilings of the churches with their elaborate frescoes, tiles, and domes. They each had other features that made them special such as crypts, relics, original stonework, and architectural designs. We were surprised at how diverse they were. 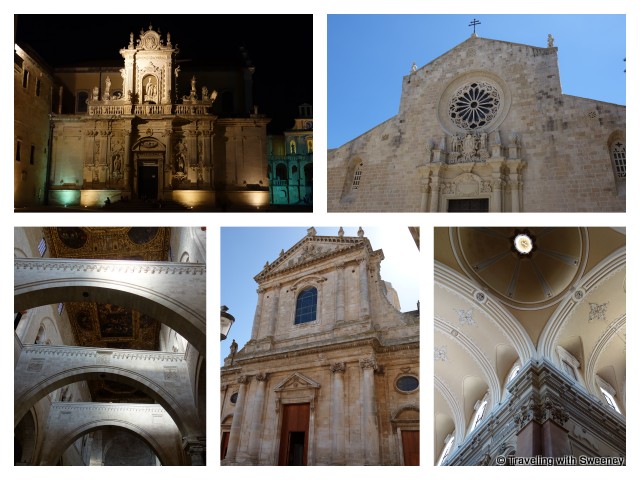 It is remarkable that so much care has been taken to keep these in many cases ancient buildings in fine condition. In Otranto, one of the oldest and smallest churches we visited was closed for restoration, but we were allowed to step inside for a few minutes to look at the work being done on the beautiful frescoes.

The first major attraction we visited in Puglia was the castle of Mont Sant’Angelo and the Shrine of St. Michael in the Parco Nazionale del Gargano. The castle had defended against of a succession of invasions of dominations since the time it was built in the 9th century to defend the Sanctuary of Saint Michael the Archangel. It is said that St. Michael appeared there during the 5th century and has been the site of many famous pilgrimages that start from Mont Saint-Michel. During various periods the Normans, Swabians and Aragons used the castle as a fortress, prison and residence (including that of Frederick II’s four wives). The castle was of great importance during the Crusades because it was a key stop on the route to the Holy Land. 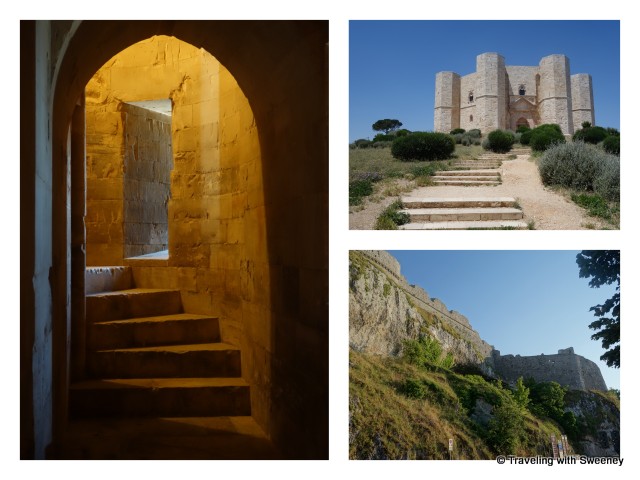 On the following day we were treated to another landmark, Castel del Monte, a UNESCO World Heritage Site. From the outside, this octagon-shaped castle is a dominant feature of the area on a hilltop near the city of Trani. But inside as we explored the many chambers on three levels we saw its real beauty, unique design and intricate stonework. What one also doesn’t see from outside is the courtyard at the center of the octagon. But that’s for another post.

There are many festivals and events in the cities and villages of Puglia, especially throughout the summer celebrating food, wine and feast days. We were lucky to be staying in Ostuni on the “Night of San Giovanni” so we got a glimpse of the traditions and a feeling of some of the excitementas  the streets were filled with festival-goers enjoying music, food and dance. Courtesy of Carlo, we were also introduced to one of Italy’s famous musicians, Tony Esposito (not the famous hockey player), who was performing with his band in the piazza and we had our photograph taken with him. But alas, we didn’t dance the traditional folk dances, giving me another of many reasons to return to Puglia! 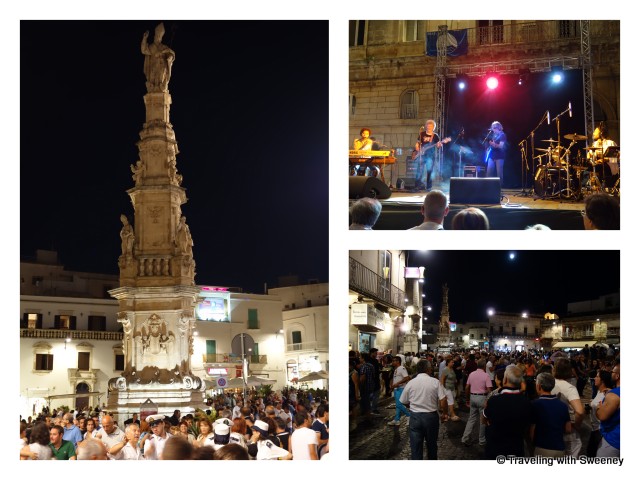 Carlo was a good representative of the nice people we met throughout Puglia. When we first met him in Foggia where we had arrived by train, we felt that he was friendly, helpful, warm, and sincere. Maybe it’s the Mediterranean climate, but nearly everyone we met seemed to be easy-going and exuded a love of life. Wandering in Galatina, we noticed an older couple peering at us from their front door stoop, looking rather stern. Our first thoughts were that they didn’t look very friendly, but I needed to ask directions since we were lost in the maze of narrow streets. Almost instantly, they warmed up and the woman (shown center right below) actually escorted us down the street to better show us the direction. 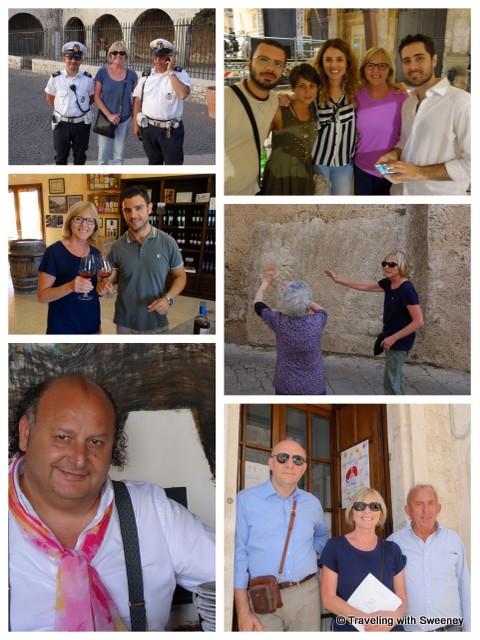 Others pictured in the photos above are Domenico Laera, the owner of L’Aratro Restaurant in Alberobello who gave us first class service and a delicious meal with his warm smile in his restaurant inside a trulli. In Bari, Carlo introduced us to two police officers who were patrolling near the entrance of the historic old town. In Locorotondo, two gentlemen with the tourist office personally escorted through the town for a portion of our walk there. It was also a bonus to meet up with a few Italian tourism representatives and bloggers at the festival in Ostuni. In Gallipoli, Cristian Tricarico gave us a tour of Cantina Coppola, the vineyard and the neighboring resort. There are more lovely people to tell you about! 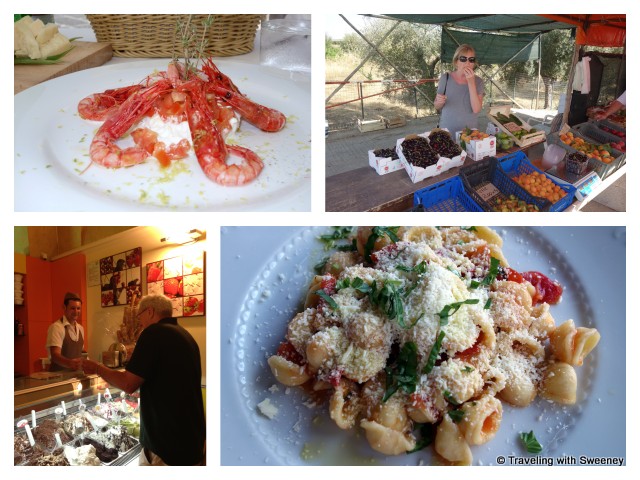 For Mr. TWS, the red Puglia shrimp at Convivio Restaurant in Trani was a new and tasty experience. The delicious abundant seafood we had Balnearea Beach was also a highlight, especially for Mr. TWS. Fresh seafood abounds in Puglia, and is served fresh from the sea in many restaurants. But an unplanned stop  at a fish market in Bari on our final night, suggested by Carlo, offered a real behind the scenes view.

I enjoyed orecchiette pasta in various dishes throughout the region, but my lunch at L’Aratro in Alberobello may be my favorite, if I had to pick one. Orecchiette is a distinctive pasta of the Puglia region named such because of its shape which resembles an ear (“orecchia”).

June is the time for cherries in Puglia and the ones I bought at this roadside fruit stand were so sweet and delicious. And of course, the gelaterias! In the photo above, you see Mr. TWS purchasing his second gelato of the evening in Lecce. 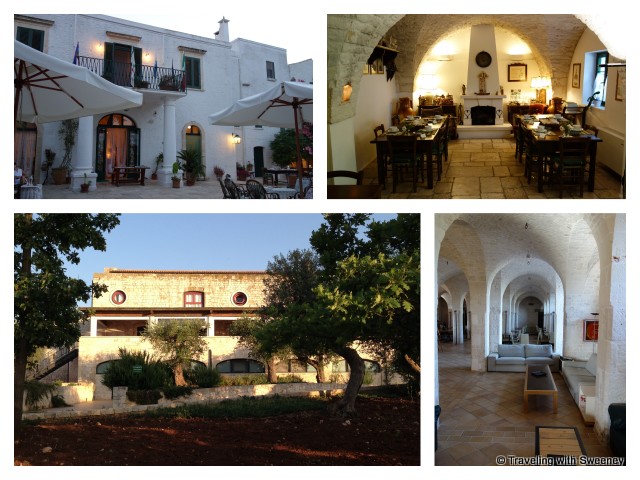 We stayed in four different towns while we were in Puglia. Three of the accommodations were very nice hotels, Hotel degli Aranci in Vieste, Hotel President in Lecce and Hotel Sheraton Nicolaus in Bari and we were pleased with accommodations and amenities. But for three nights, we were introduced to a lodging concept that is unique to Puglia — the masserias.

Masserias are countryside lodgings in former farm house communities (often fortified for protection from attacks during the 16th – 19th centuries) that are unique to the Puglia region. Many, like Masseria Il Frantoio, are still working farms with olive groves, vineyards and gardens. Victor Country Hotel  is located just outside of Alberobello in a rural setting. There are also very mysterious abandoned old buildings (and trullis) on the property that will grab your attention. The meals at both masserias were gourmet and served in lovely outdoor settings.

Carlo was very excited to show us Polignano de Mare and we made a point to stop there on our way to Bari for our last night in Puglia. Although we were only there for a quick look around town, we could see why he loves the place, and we hope to get back for a proper stay sometime. We also got to see a movie being filmed in the piazza. One of the points of interest in town is this statue of Domenico Modugno, a native of Polignano who co-wrote and recorded the song Volare — meaning “to fly”. I sang the popular refrain of the song out loud, but luckily there isn’t a recording of that! You’ll just have to use your imagination, or better yet, listen to Domenico Modugno singing Volare. 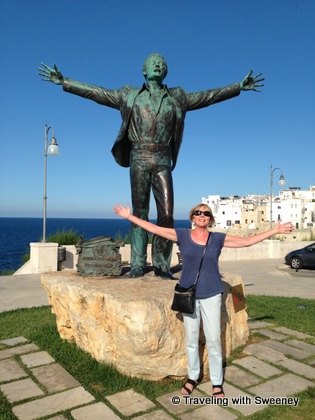 At Bari Palese International Airport the following morning, I was preparing to board a plane to fly home. I had a smile on my face, but inside I felt a little sad to be leaving Puglia. I hope it won’t be long before we visit again. 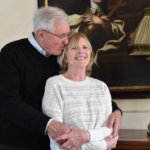 I Dream of Going Back to Italy

Viking Cruise Shore Excursions: Should You Take Them?
Note: This post may contain affiliate links. If you make a purchase through these links, I will earn a commission at no extra cost to you. Thanks!

In Madrid there are so many plazas to love. Plaza

The Alhambra at sunset as seen from the Albaicin n

Looking down … my view of the staircase from my

Arrived in Madrid, final stop on our #triptospain

A few views of Granada, Spain — the third stop o

Mr. TWS loves being in the water and couldn’t wa

Beautiful Valencia! Walking along the paths of Jar

Out and about in Valencia, Spain. Beautiful, breez

Hello from PHX! Another first since pre-pandemic t

Step inside the inviting world of Papa Zouk in St.