Around the world, many are reflecting on the tragic events of September 11, 2001 as we approach the ten year anniversary.

I’m sure that I’ll never forget where I was when I first learned of the terrorist attacks. My husband and I were on the island of Kauai staying at a beachfront condominium near Poipu Beach. Our wedding anniversary was on September 14th and we wanted to celebrate it on the same island where we had spent our honeymoon.

Although we were on a holiday, my husband was still staying in touch with his office in California. With a three hour time difference, he was up at 4:00 a.m. on the morning of September 11th to follow up on a few things back at work. His colleague there told him to turn on the television, but didn’t say why. I was awakened by him repeating, “Oh, my God”. I got up to see what was wrong and then saw the smoke billowing from the World Trade Center on the screen. For hours, we were glued to the television. With the sound of the waves gently rolling on the nearby beach and the warm breeze through the patio doors, the scenes in New York were surreal.

Feeling grief and helplessness, we stepped out for a walk on the beach where a few other people were also slowly walking along, shaken as we were. We felt almost guilty for being in this island paradise while such tragedy was striking in New York, Washington DC and Pennsylvania.

We needed to get away and try to grasp it all, so we decided to take a drive, something we love to do. It was the best action we could think of to take and it was very comforting. Along the way, we stopped at this church since it looked so peaceful and calming. 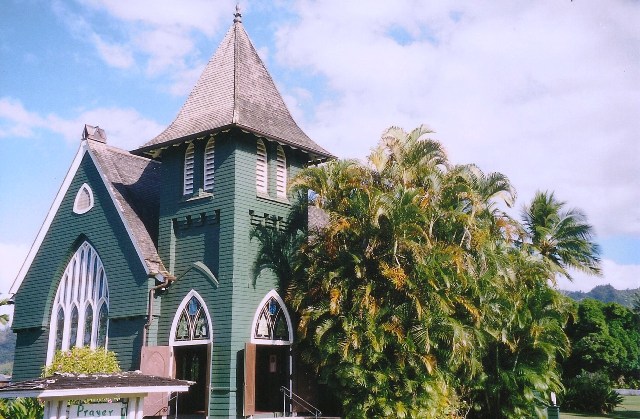 We were scheduled to fly to Honolulu just for the day on the 11th, ironically to see Pearl Harbor and the USS Arizona Memorial. Flights, of course, were cancelled, but resumed in time for our originally scheduled trip back home. Upon landing in Honolulu from Kauai, we saw numerous armed soldiers inside and outside of the terminal. It was then that it struck us so clearly that not only had a tragic event unfolded that devastated thousands — our world and our lives were forever changed.

Do you remember where you were when you first heard about the attacks on September 11, 2001?

30 thoughts on “Reflections on September 11th”