I started out one morning on a walk to the Toronto waterfront and I ended up exploring the world. The world according to Toronto Harbourfront Centre’s summer slogan, “The World in One Place”, that is.

The 10-acre site on the waterfront boasts of being “.. every woman. And every man. Every child. Every ethnicity. Every artist. Every culture” with its diverse offerings of visual and performing arts, festivals, music competitions, summer camps, water activities, shopping, dining and dancing. That’s quite a claim so I couldn’t wait to see what was happening there.

What I Didn’t See at Toronto Harbourfront Centre

Being there mid-week, I knew I wouldn’t be able to take in the concerts or festivals, but I was disappointed to discover that I also wouldn’t be able to see the exhibits at The Power Plant, one of Canada’s foremost contemporary art galleries. Crews were busy transforming the gallery for the new Tools for Conviviality exhibit opening on June 30th. The building is located in a renovated 1920s powerhouse facility. Next to it, people were enjoying the sunshine at Netral Pond, where canoes and paddle boats can be rented for summer fun. 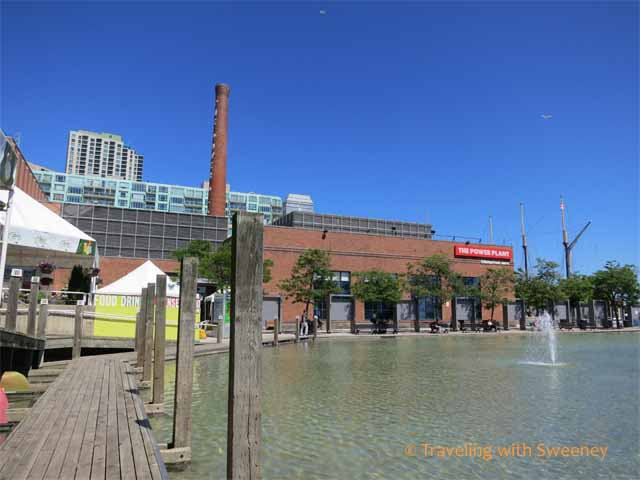 The Power Plant and Netral Pond

Although I struck out at The Power Plant, I did get to see these other exhibits at York Quay Centre which is the arts, crafts and recreational venue at Harbourfront Centre.

Architecture at Harbourfront Centre presents exhibitions to educate and explore ideas of contemporary architecture. The current exhibition running through July 8th, Big Enough?, questions the need for space — how much do we really need? I’m not one for getting too deep into architectural and city planning philosophies, but I did like the “reconciliation passage”, a corridor with varying dimensions and lighting for testing a person’s comfort limits. As the space becomes tighter, the light becomes brighter. From a visual perspective, it was pretty cool, too. If you’d like more detailed information about the Big Enough? exhibit, check out Architecture at Harbourfront Centre. 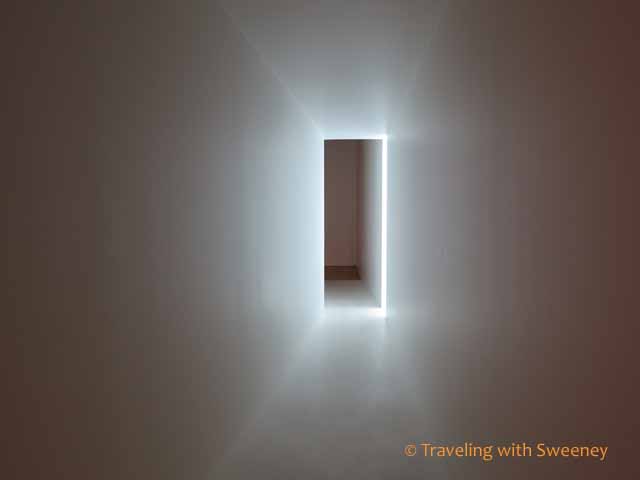 These photos are selections from four of the six exhibitions currently running at York Quay Centre through July 15, 2012. 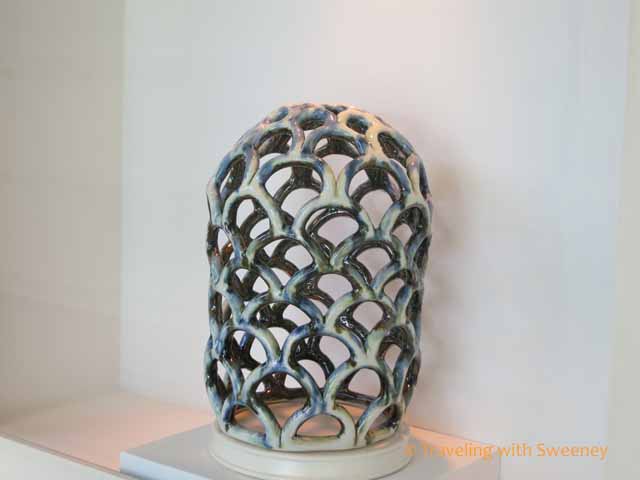 Sixteen artists contributed to the Jubilee exhibition offering their perspectives of the monarchy’s role in commemorating the Queen’s Diamond Jubilee marking sixty years since Queen Elizabeth II’s coronation. This crown made of clay is the work of Julie Moon. She describes it as an example of “…how ornament can communicate aspects related to status surrounding the wearer”. 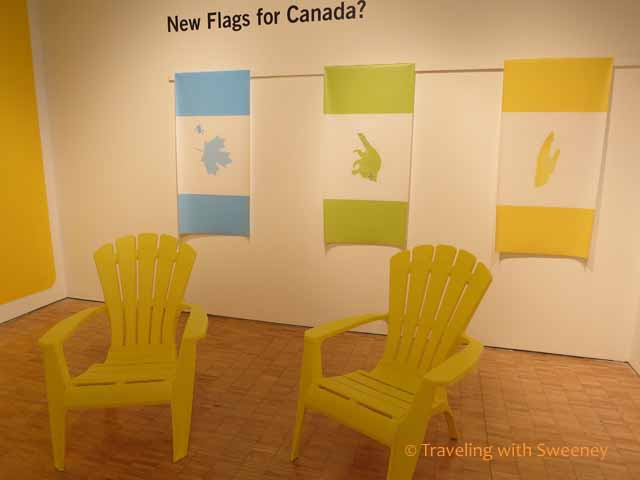 The Ideas of Canada (Part 2) project was created in response to survey projects run last year that asked Canadians about icons and how well they represent Canada today. This exhibit of possible new Canadian flags was based on results from the Canada Day Bingo Icon survey. 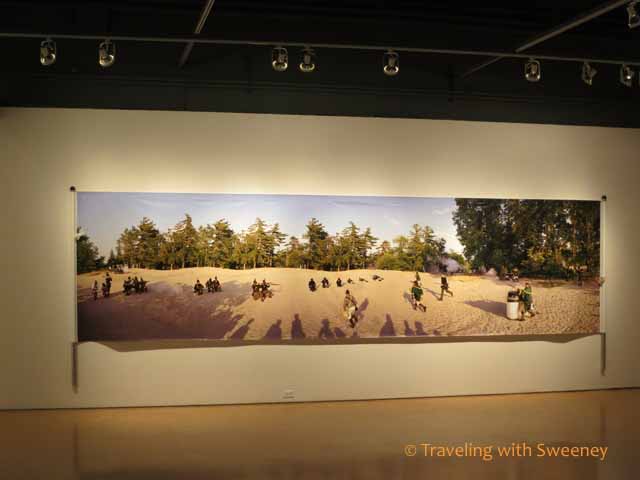 Reenactment of The Battle of Wasaga Beach, War of 1812 Exhibit

Working with a variety of materials, five artists produced works for the 1812 – 2012: A Contemporary Perspective exhibit, commemorating the bicentennial of the War of 1812 with a look at the historical aspects from a contemporary viewpoint. Mark Kasumovic’s The Battle of Wasaga Beach takes several photos he took at a War of 1812 reenactment and pieces them together into one panoramic scene. 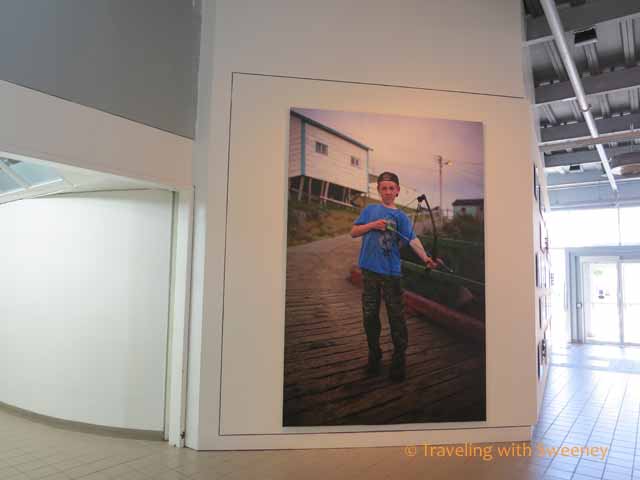 I loved the poignant photography of Johan Hallberg-Campbell whose Coastal exhibit captures life in the diminishing towns of Newfoundland’s southwest coast.

Through the glass-walled Craft Department corridor, you can watch the artists-in-residence at work on multi-disciplinary projects. The department helps post-graduate craftspeople to get a start in their careers.

The boardwalk along the waterfront is a great place to stroll and have lunch while people-watching. There are also several tour and charter boats that leave from the piers at Harbourfront Centre. More on my tour boat ride later. 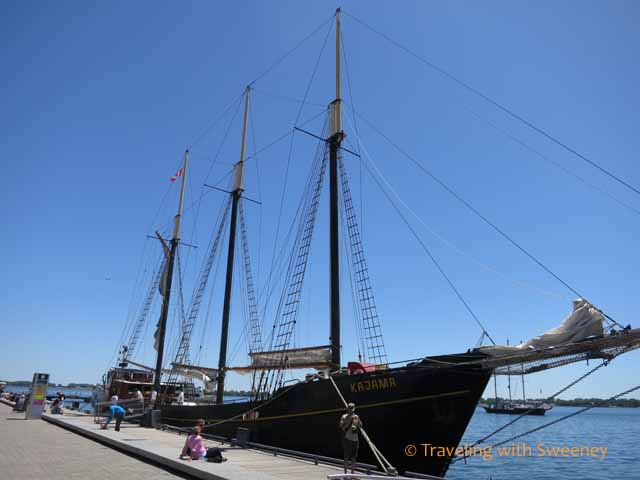 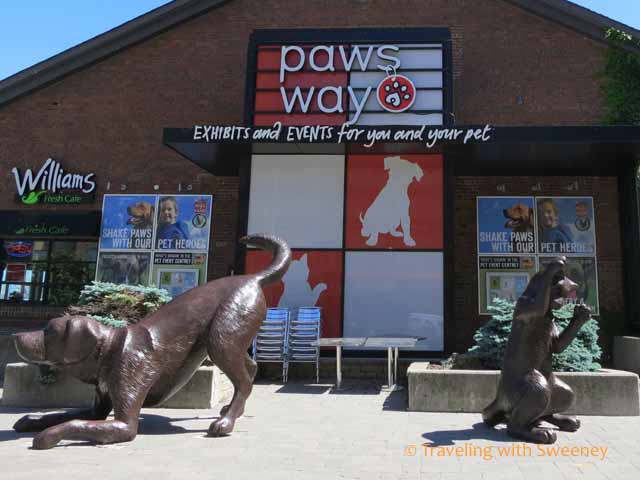 It’s all about you and your pets at PawsWay, a pet-friendly venue with educational exhibits, activities and events. It’s also the home of the Purina Animal Hall of Fame™ that honors pets and service dogs for their extraordinary acts of heroism that have saved lives.

A Walk on the Wild Side

Take a fun little walk on the Wave Deck. It’s designed to represent the waves at the shorelines of the Great Lakes. 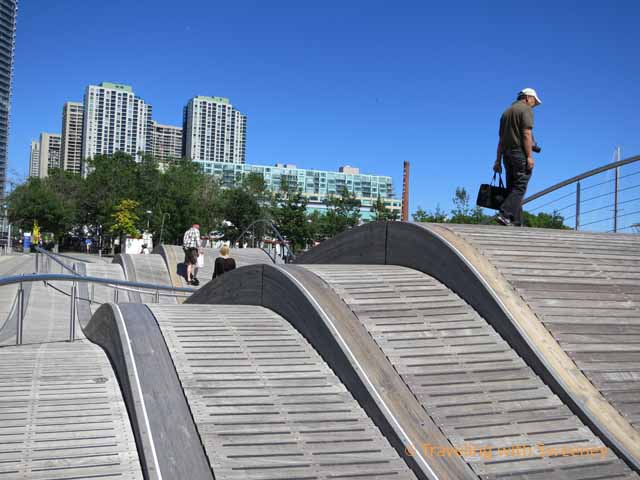 Of course, there’s more to Harbourfront Centre than I was able to see that day. It must be especially vibrant when concerts and festivals are going on. I’ll just have to come back to see more of the world next time.

17 thoughts on “See the World in Toronto”

Perhaps you recognize this location from the lates

When we visited St. Petersburg, Russia in late Sep

Riding on a long and quite steep (more so than the

Stockholm, Sweden. One of the great things about @

The art of the cruise. From the first steps onto t

Sunset in Stockholm. And so began our Baltic cruis