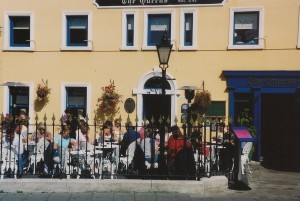 Visiting pubs while traveling through Ireland presents an opportunity to sample the best Irish whiskeys or have a Guinness, which some believe is dramatically better than what’s exported to the U.S. However, my favorite Irish pub memories of a past trip are about experiencing the warmth of the Irish people.

Shortly after leaving Dublin for our first day on a 10-day road trip (and first time driving on the opposite side of the road) we got a flat tire while maneuvering down a very narrow residential street in Dalkey. Rather than turning the day into a disaster, it created a chance to see first-hand the friendliness of the of the Irish people demonstrated by the many residents who came out to offer help while my husband changed the spare. They directed us to a small auto shop and a man who could replace the tire immediately for a fair price. While he fixed the tire, we enjoyed a meal and a pint at The Queens. I particularly include the pub as a favorite because the weather was gorgeous – sunny and unseasonably warm – as we watched the locals go about their day from the outdoor dining area, and felt excitement about soon continuing on our journey in this wonderful country. 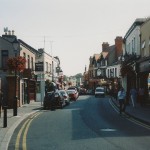 In County Kerry, we drove the Ring of Kerry, which was a must despite the inclement weather. When we reached Caherdaniel, we stopped at The Blind Piper. From our seats by the window, we saw a man on his bicycle riding up to the pub in the rain. As we soon learned, he was meeting his good friend who was already seated at the bar. They told us that they meet there every day at lunch to have a pint together, rain or shine. Witnessing this friendship and enjoying the extremely cozy atmosphere makes this pub stand out in my mind. 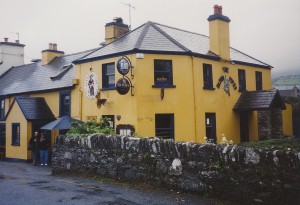 I knew that County Limerick had a place in family history, so we headed to Doon, a town that my father had mentioned. At Chaser Fitzgerald’s in New Pallas Green for a hearty carvery lunch, we struck up a conversation with the bartender which turned into more discussions with several of the folks around us. We were told about specific people to talk to in Cappamore, which is where they said the Sweeney families lived. Unfortunately, we really hadn’t planned time in the trip for genealogy research so couldn’t make the calls. However, we did drive to the town and later found out they were right to lead us in that direction as Cappamore has major family history significance. 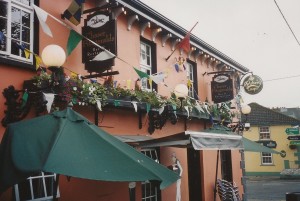 On a stormy Sunday morning, we left our inn in Doolin for a fascinating drive through The Burren. In a torrential downpour, we got out to see the Poulnabrone Dolmen, a striking ancient tomb. It was so windy that our umbrellas went inside out and were useless, but we weren’t going to miss seeing this site. Totally drenched, we drove to Barna, where we stopped at Donnelly’s. A large family with several red-headed children dressed in their Sunday best were at a table near us. Nobody gave any sign that we were out of place there in our soaked jeans. It was a very warm and comforting experience as we dried off and enjoyed the best brown bread we had on the whole trip. 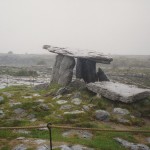 In Spiddal, County Galway, we enjoyed the best of our pub experiences at An Caladh Mor. In this Gaelic-speaking part of Ireland, we heard the language all around us. It was there that we especially witnessed how people of all ages socialize together in Irish pubs. It was wonderful to see young and old talking, laughing, and dancing together. People welcomed us as though we were all old friends. A middle-aged woman sat alone at a small table, smiling and enjoying a drink and the music. Next to us a young woman was having a light-hearted conversation with someone who may have been her grandmother. The live band was performing alternately, traditional Irish songs and classic rock tunes, including many by the Beatles. As closing time neared and the last dance was over, the band began to play one more song as everyone stood up. We weren’t sure what this was about and looked over at one of the locals who with a smile and a wink motioned to us to stand as well. We then realized it was the Irish National Anthem. That was quite a moving experience for us and as we left the pub that night many said goodnight to us as though we were regulars. We felt as though we truly belonged there.

So here’s a toast to those wonderful people we met in these pubs as well as others throughout Ireland:

Sláinte! (To your health!)