Four days, top things to do in Athens, Greece

It’s not a myth — visiting Athens is a wise thing to do. I couldn’t resist this reference to Athena, the Greek goddess of wisdom for whom the city is named. The myth behind the naming of Athens describes a competition between Poseidon and Athena to determine which of the deities would have the honor. Athena won the contest. 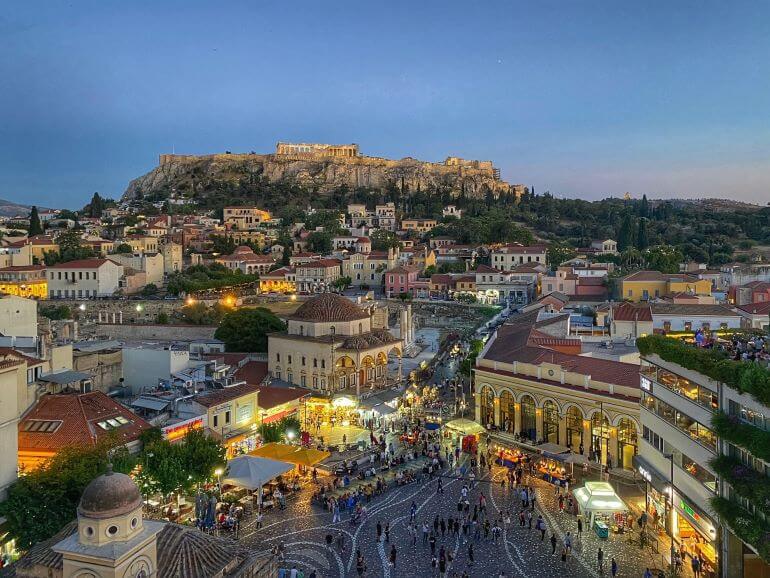 Monastiraki Square and the Acropolis

“Poseidon and Athena had a much-publicized quarrel over who deserves to be the patron of the most prosperous Ancient Greek city, Athens. Poseidon claimed that the city would benefit more from him than Athena and to prove this, he struck his trident into a rock, creating a seawater stream which welled up in the Temple of Erechtheion on the north side of the Acropolis. Smart as she was, Athena did nothing spectacular: she merely planted an olive tree. However, the first king of Athens, Cecrops – who was the judge of the contest – realized that the olive tree was much more beneficial, since it gave the Athenians fruit, oil and wood.” — Source: GreekMythology.com 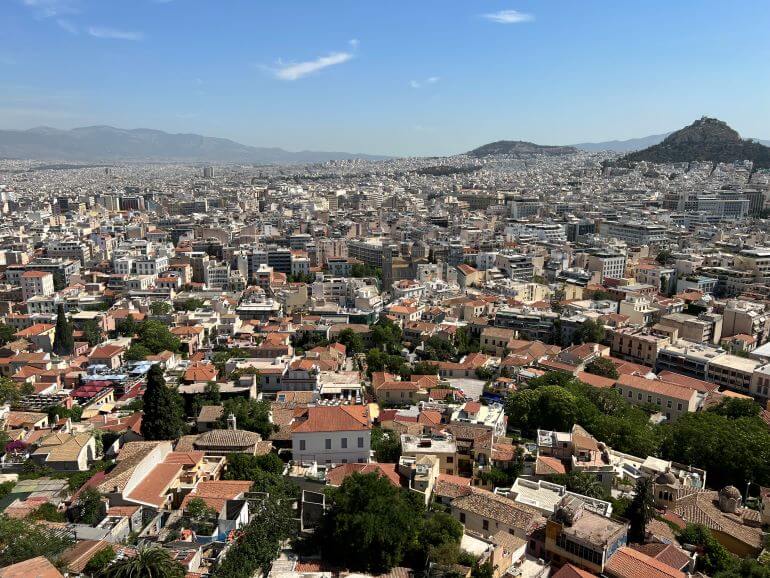 View of Athens from the Acropolis

What picture comes into your mind when you think of Athens, Greece? If your impressions, like mine, have been formed from travel brochures and world history books, you’ll see the image of the Parthenon at the top of Acropolis Hill. When you visit Athens, you’ll be treated to that sight throughout the city and from various perspectives. And below this famous landmark, you’ll find more of ancient and modern Athens to capture your interest. Here are some highlights from our time in Athens during out 12-day trip to Greece. 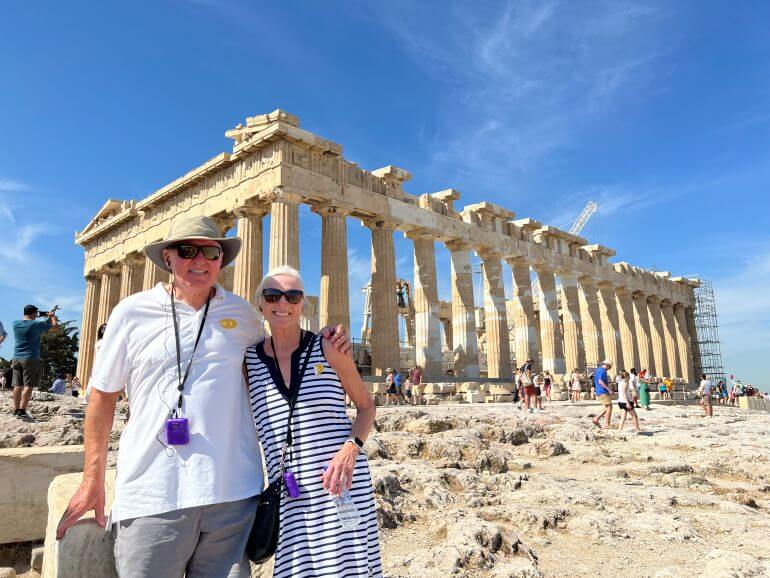 The Parthenon at the Acropolis

Of course, visiting the Acropolis and its remarkable sites (which include the Erechtheion, the Parthenon, Odeon of Herodes, and many more) should be on everyone’s itinerary. Take an early morning guided tour to have the best experience by beating the heat and skipping the lines. Wear comfortable walking shoes as it is quite a climb on rocky ground and uneven marble stones. 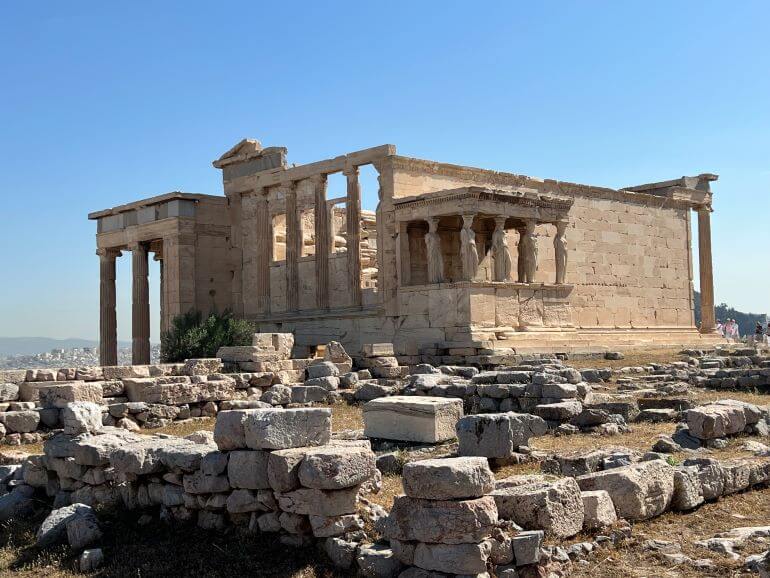 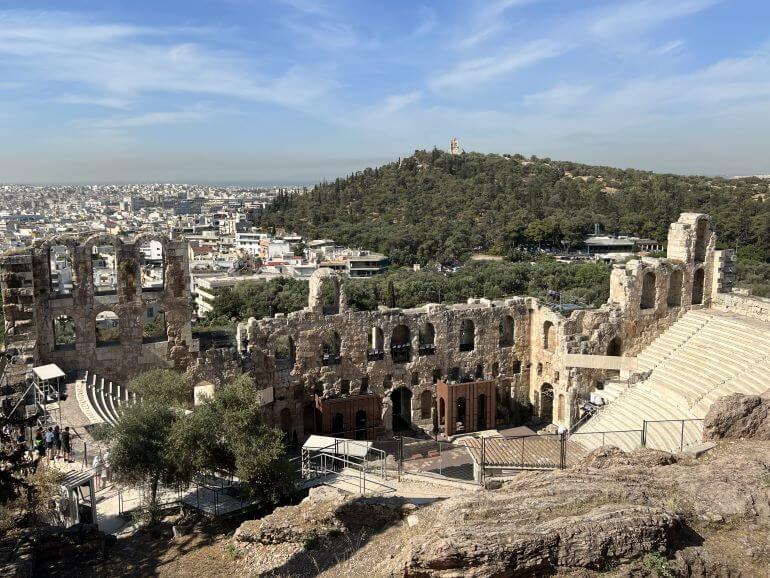 Our guided street food experience in the Plaka and Psyrri districts directly followed our Acropolis tour. It was a nice add-on to the Acropolis and we were definitely hungry. Among other tasty items, you’ll most likely sample Greek specialties like chicken, beef, or lamb souvlaki (served skewered or as gyros in pita); spinach pie (spanakopita); sweet cream pie (bougatsa); and honey donuts (loukoumades). 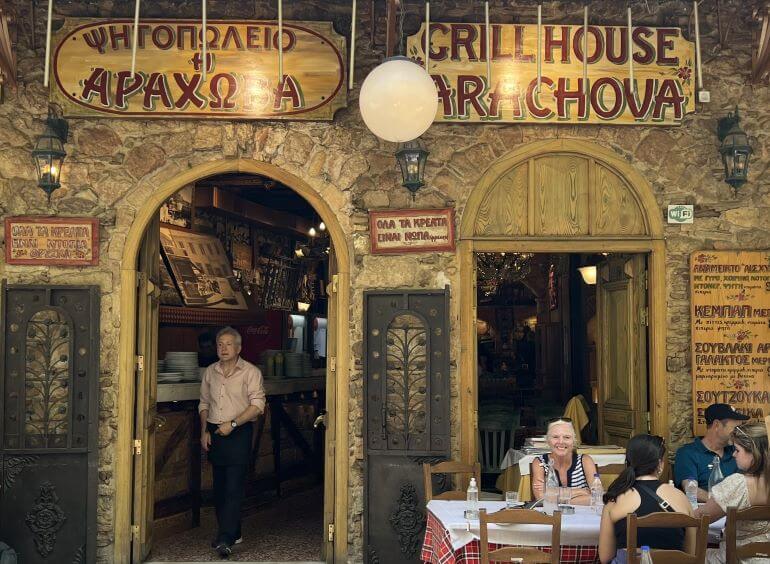 One of our stops on the food walking tour 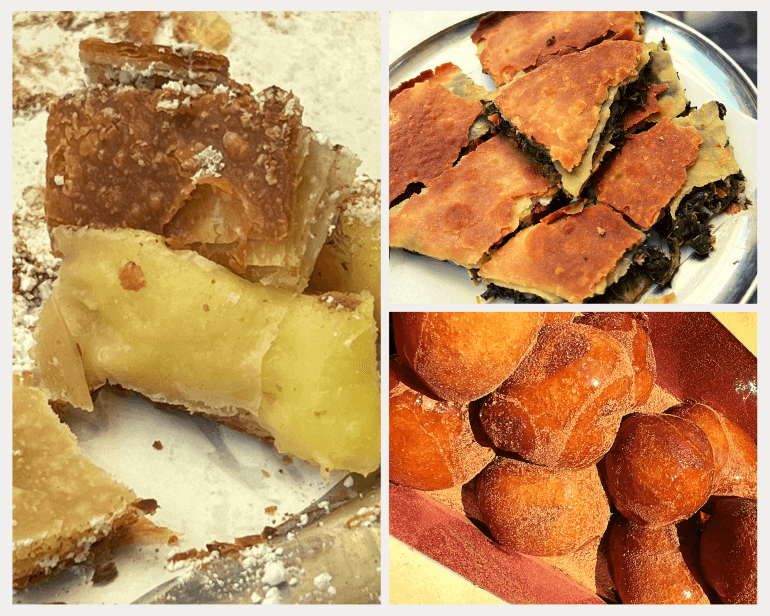 Climb the highest hill in Athens on foot and/or ride the funicular to the top for panoramic views. Take a look inside the Chapel of Agios Georgios on the hilltop. 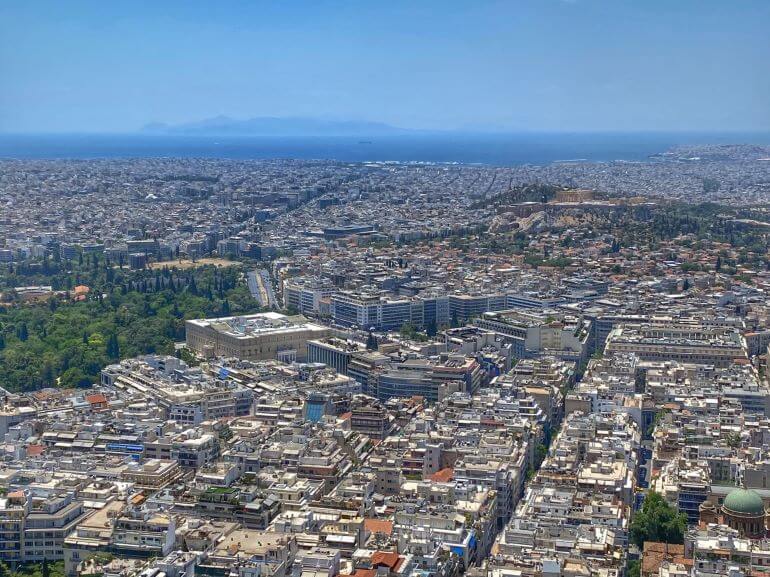 View of the city and Aegean Sea from Lycabettus Hill

Parliament and Tomb of the Unknown Soldier

Make sure to catch the changing of the presidential guards (evzones) in front of the parliament building at Syntagma Square. The ceremony takes place at the top of every hour. If you happen to be there on a Sunday, it’s a very formal ceremony involving a whole platoon of guards accompanied by a band.

Changing of the guard at Parliament

Take a break from sightseeing at this beautiful, serene respite from the bustling city at Syntagma Square. The main entrance is on Leoforos Vasilissis Sofias, south of Parliament. After having a leisurely stroll around the garden, we exited at the Irodou Attikou gate on the east, where the guard stationed there was starting his march around the block for the changing of the guard. We followed him all the way to Parliament. 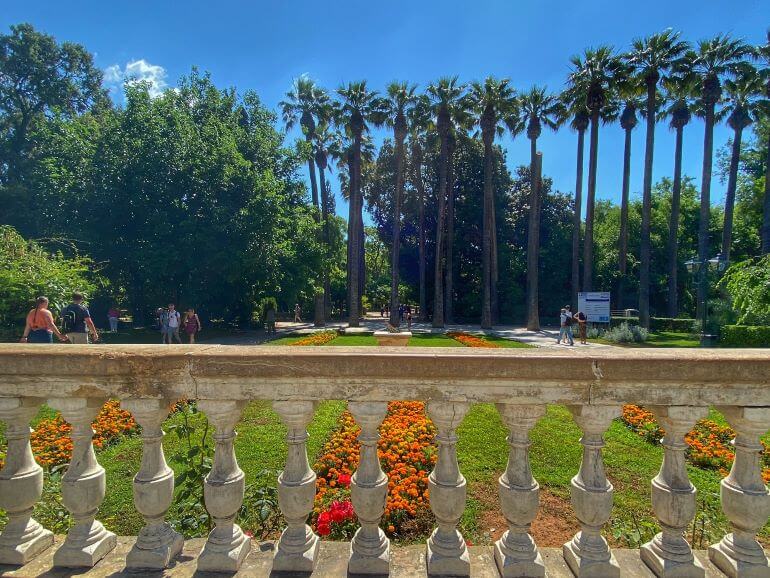 Enjoy the ambiance of this upscale neighborhood with many bars, cafes, restaurants, and high-end shopping along its tree-lined streets. 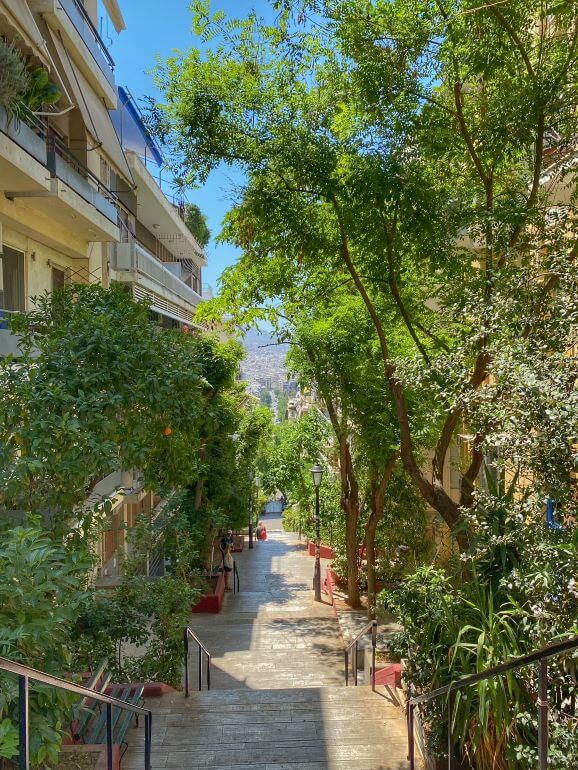 Roam around the narrow streets of these lively neighborhoods in the city center for dining, shopping, museum visits, and getting a feel of old Athens.

In these neighborhoods, you’ll also find many other notable sites, such as Hadrian’s Library (shown below). 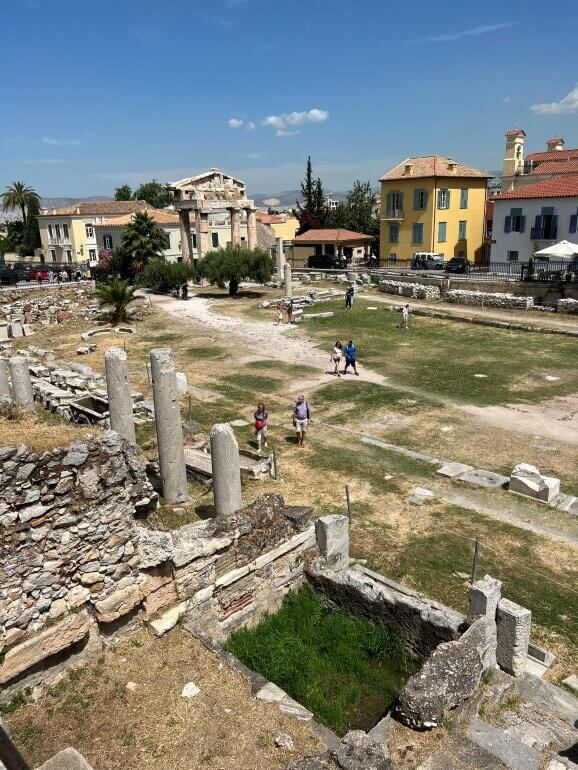 The word “graffiti” derives from the Greek word “graphein” meaning “to write” and you’ll find many examples of street art expressing cultural and political messages throughout the city. 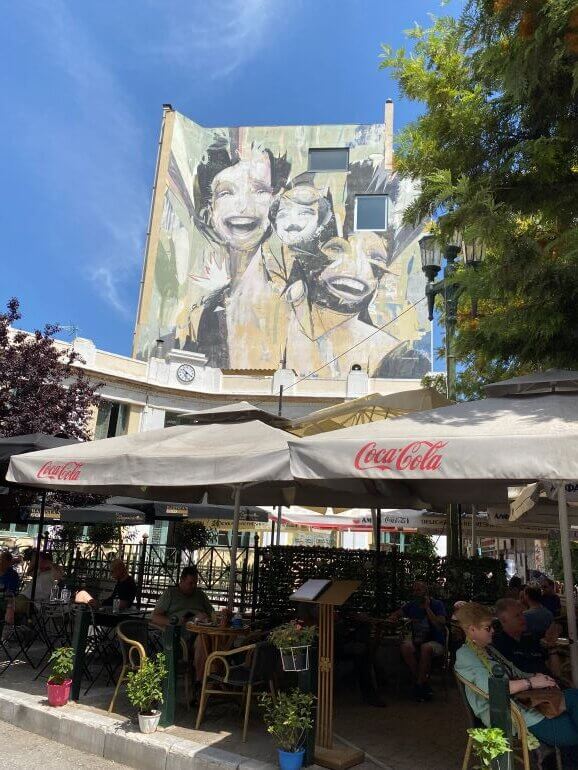 Take a 2-hour drive on a guided tour to Delphi and site of the famous Oracle. Along the way, there is beautiful scenery in this mountainous area of the peninsula north of Athens. Next to the archaeological site is the Delphi Museum with extensive artifacts from Mycenaean to Greco-Roman times that were discovered during excavations.

Delphi lunch tip: We booked the tour’s optional lunch at a long-established restaurant just outside of Arachova, a beautiful mountain village. It was a good value and a convenient way to go since we were with the group. If you have your own car, you can also check out other dining locations in Arachova. 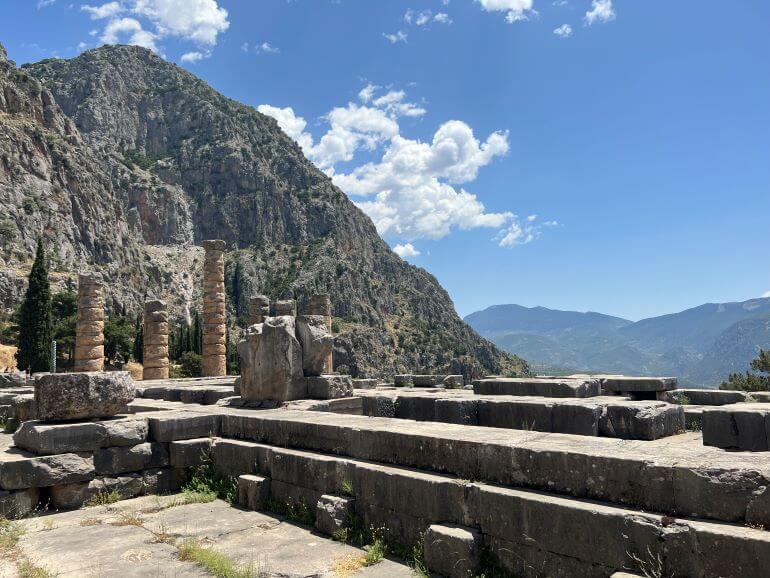 Getting around tips: Within the city of Athens, we walked everywhere. To and from the airport, we took taxis. It’s said that the Metro system is also a very good option for getting around the city. There are many flights and ferries from Athens to the islands. We took Aegean Airlines from Athens to Santorini and from Crete back to Athens. 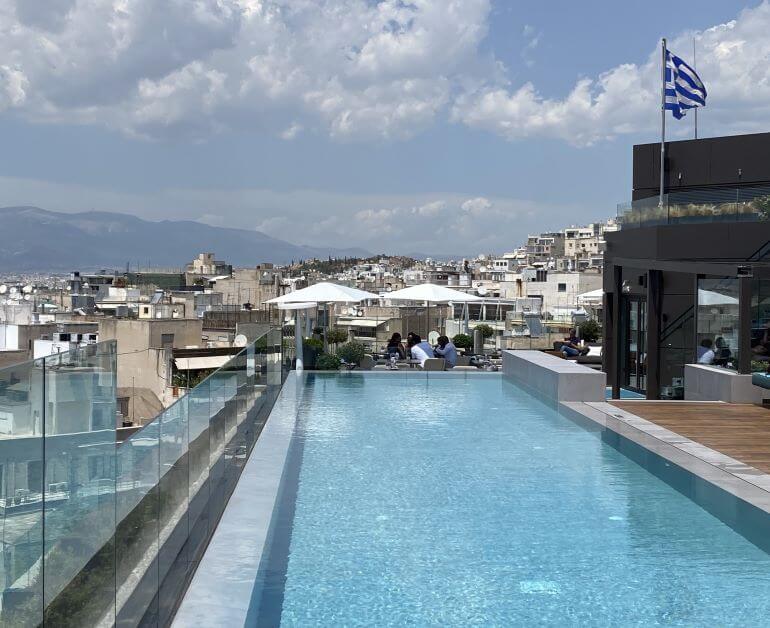 We booked reservations here because we have enjoyed stays at the MGallery brand of the Accor Group Hotels during previous stays in Poland and France. We were quite satisfied with this hotel’s convenient location, our room (a deluxe room with city view), staff service quality  (particularly that of our concierge, Athena), and the rooftop pool and restaurant with great views.

On our final night in Greece (returning from Crete for our flight home the next day), we stayed at the Sofitel Athens Airport, just a short walk from the terminal to the hotel lobby. The hotel met our expectations of the consistent high quality of the Sofitel brand of the Accor Group hotels.

Next trip museum tips: Museums abound in Athens and with a few more days, we would have gone to several including these highly recommended ones– Acropolis Museum, Benaki Museum of Greek Culture, Museum of Cycladic Art, and the National Archaeological Museum.

Sunset in Greece — on plane flying into Athens

I hope this has given you ideas for things to do in Athens. Next stop for the TWS duo — Santorini! 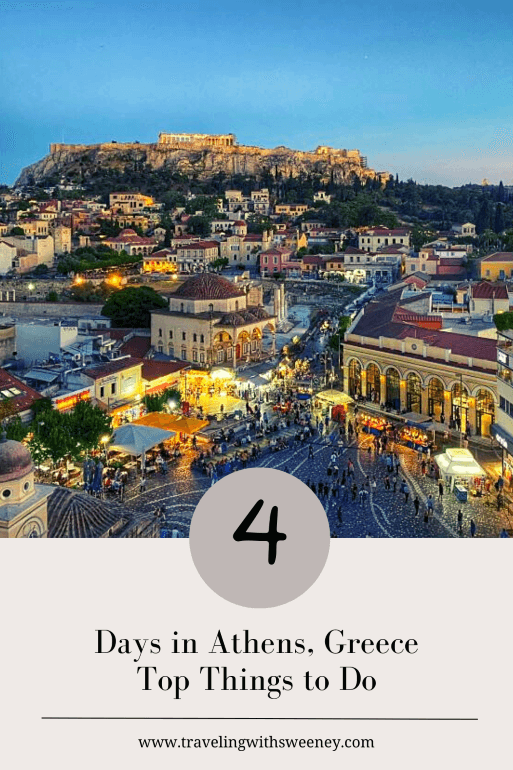 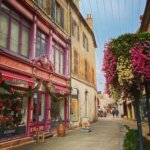 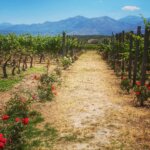 6 thoughts on “Athens, Greece: City of Athena, Goddess of Wisdom”